I looked into the passenger side window of the car as it rolled past, and I could see that the driver was wearing a hat with the Miami “U” on it. Normally, in my neighborhood, that would stand out. I grew up in USC Trojan country, about 15 minutes north of downtown Los Angeles.

But this was New Year’s week in 2001 — better known in Los Angeles County as Rose Bowl Week. That year, it was the national championship game, No. 1 Miami vs. No. 2 Nebraska. So if you walked down the street anywhere in L.A., you saw Nebraska red and white and Miami green and orange.

So it wasn’t really the hat that stood out to me as the car rolled by. It was what I saw when the car passed me and I looked back as it drove away. There was a bumper sticker on the back fender that read GO CANES! and a Florida license plate — which, if you’ve never seen one, is also green and orange, like it was designed with the Hurricanes in mind.

I thought, That guy drove all the way to L.A. from Miami? For a football game?

I was six years old at the time, so I didn’t understand how far that really was (it’s almost 3,000 miles). I just knew it was far. I knew Nebraska was far away, too, but I hadn’t seen many cars with Nebraska plates driving around.

After that, I started noticing Hurricanes bumper stickers and Florida plates everywhere. When I walked around town, I saw number 11 Ken Dorsey jerseys lining the sidewalks. There were pops of Nebraska red and white here and there, but you couldn’t get away from the green and orange.

It was like the Hurricanes had taken over Los Angeles. 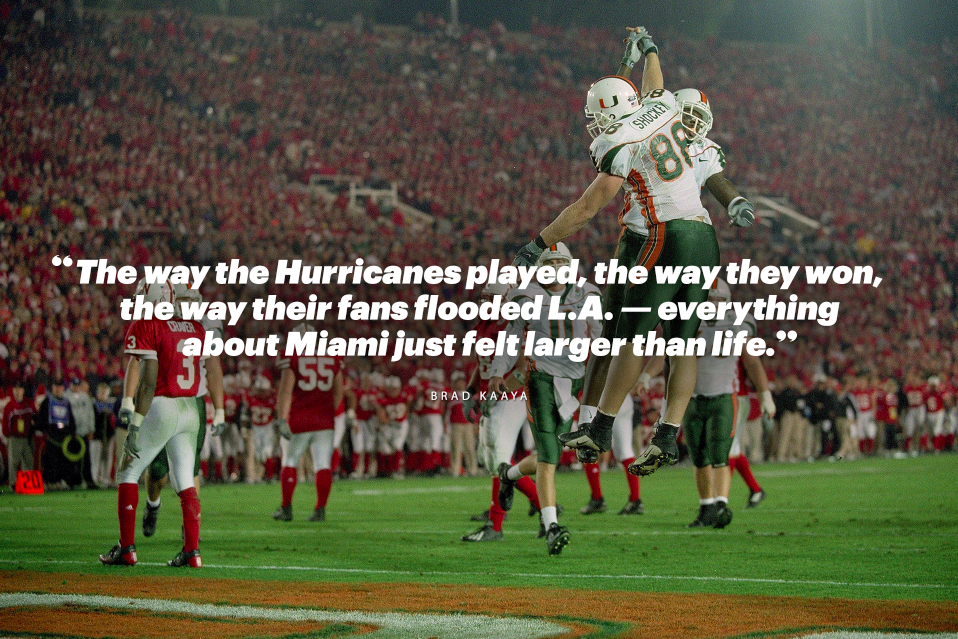 Later that week, Miami destroyed Nebraska in the Rose Bowl, 37-14, and it wasn’t even that close. I remember watching it on TV. It’s a game that has always stuck in my memory. The way the Hurricanes played, the way they won, the way their fans flooded L.A. — everything about Miami just felt larger than life.

After the Hurricanes won the national title, the USC colors came back out and pushed the green and orange out of Pasadena, and L.A. went back to being Trojan Country. The years that followed were the glory years of Carson Palmer and Matt Leinart. Heisman trophies, national title games, the Bush Push — iconic stuff. So if you were a kid playing youth football during that time, odds are you wanted to play college football at USC.

The problem was, by the spring of 2013, when I was preparing for my senior year at West Hills Chaminade in L.A., I only had two scholarship offers. Neither was from USC.

Some recruits are into the signing day drama. I really wasn’t. I wanted to commit early. I wanted to know where I was going so I could focus on my senior year — on being the best quarterback I could be for my team while preparing for the next level.

Of the two offers I had on the table, one was from San Diego State.

The other was from Miami.

Not to knock San Diego State, but the favorite in that race was pretty clear — not to mention the fact that Miami had recruited me throughout my junior year. They were the first program to show a genuine interest in me, and they never let up.

So in May of 2013, with no offer from the Trojans in sight, I committed to Miami.

Anybody who has ever been recruited will tell you: Just because you’ve verbally committed doesn’t mean the recruiting process stops. The letters keep coming in and the phone keeps ringing. Even though I was strong in my commitment to Miami, I still took the phone calls and visited other campuses, including USC and UCLA.

Then, out of nowhere, in the span of six days, I received an offer from each. Offers to play in the Pac-12. Offers to stay at home in L.A. 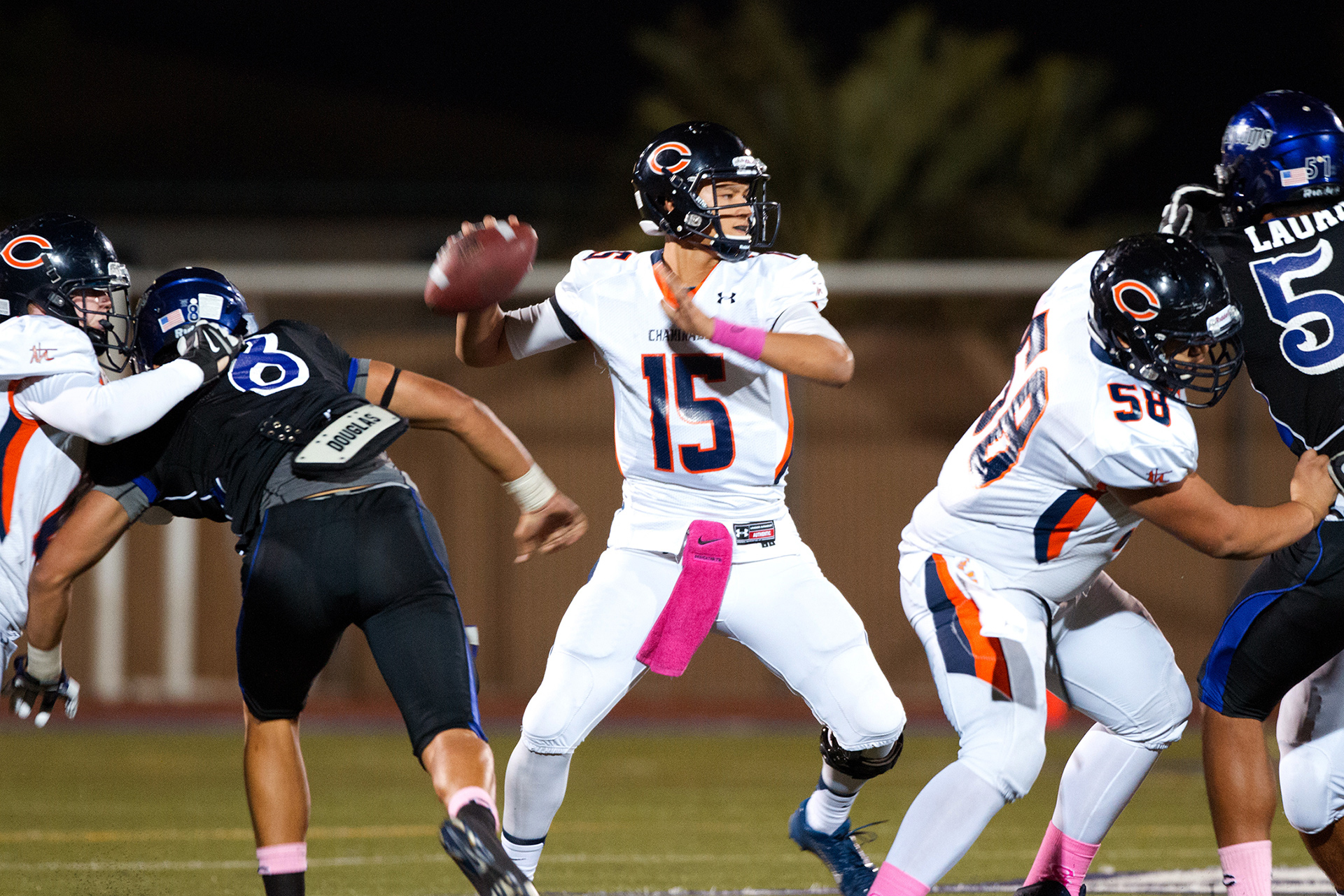 UCLA is a fantastic program, and they were really on the rise at that time. But USC was the one offer outside of Miami’s that I truly considered. I mean, I had grown up dreaming of playing at USC. There was a lot to consider, but in the end, it didn’t take long.

I had seen the 30 for 30 documentary The U, so I was aware of Miami’s history and those teams in the ‘80s and early ‘90s. And I saw firsthand what happened in Pasadena in 2001 — I’ll never forget that. So I knew what Miami once was, and what it could be again.

But they hadn’t been that for a while. By the time I committed, they were coming off a 7-5 season and hadn’t hit the 10-win mark in eight years. It was something I thought about a lot — the direction of the Miami program at the time. But the more I thought about it, the more I knew Miami was where I wanted to be.

I realized I didn’t want to just have a torch passed to me and told not to drop it. That’s what I would have had at USC. Like, “Here’s a Ferrari. Don’t crash it.”

I wanted to be a part of something different. I wanted to help build something. I wanted to blaze my own trail and help bring Miami back to prominence. I liked the sound of that challenge.

Plus, Miami believed in me before anybody else. James Coley, the Hurricanes’ offensive coordinator at the time, traveled across the country and found me in USC’s backyard before the Trojans even knew my name. And that meant something to me.

So I said no to my dream school.

And at the end of the day, signing day was just the formality I had hoped it would be. I made my decision. I was going to be a Hurricane. All I had to do was make it official.

The final semester of my senior year, I spent almost every night in front of my bathroom mirror.

I didn’t enroll early at Miami. After signing day, I went back to Chaminade to finish my senior year. I was set to report to Miami that summer, and Coach Coley sent me film and a playbook to study in the meantime. So every day after school, I went home and watched a couple of hours of film — spring practice, cut-ups from the previous season’s games, whatever. And then I hit the playbook, hard.

Then I would practice calling out plays at the line — all the protections, all the checks. And the best place to do that was in my bathroom mirror.

So I would be standing there, staring back at myself, pretending I was in the huddle.

“All right, all right,” I’d say, looking around at myself and my imaginary teammates. “Gun doubles right, two jet, all stops. On one, on one. Ready? Break!”

I’d break the huddle with a clap and mentally trot up to the line, then lean to one side and point at the wall behind the medicine cabinet to identify the Mike linebacker.

Then I’d settle in and bend down into the mirror.

I did this over and over with just about every call in the book. I did everything just like I would in a game — well, everything except drop back after the snap, because I’d end up in the bath tub.

I wanted to get it to where everything I said was automatic. No stuttering, no hesitation, no uncertainty. I wanted to call every play with authority. Most freshmen redshirt and it takes some time before they get their opportunity. I figured the same would happen for me. Ryan Williams was a fifth-year senior who had solidified himself as the starter.

But you never know when you might get your shot. And I wanted to be ready, just in case. 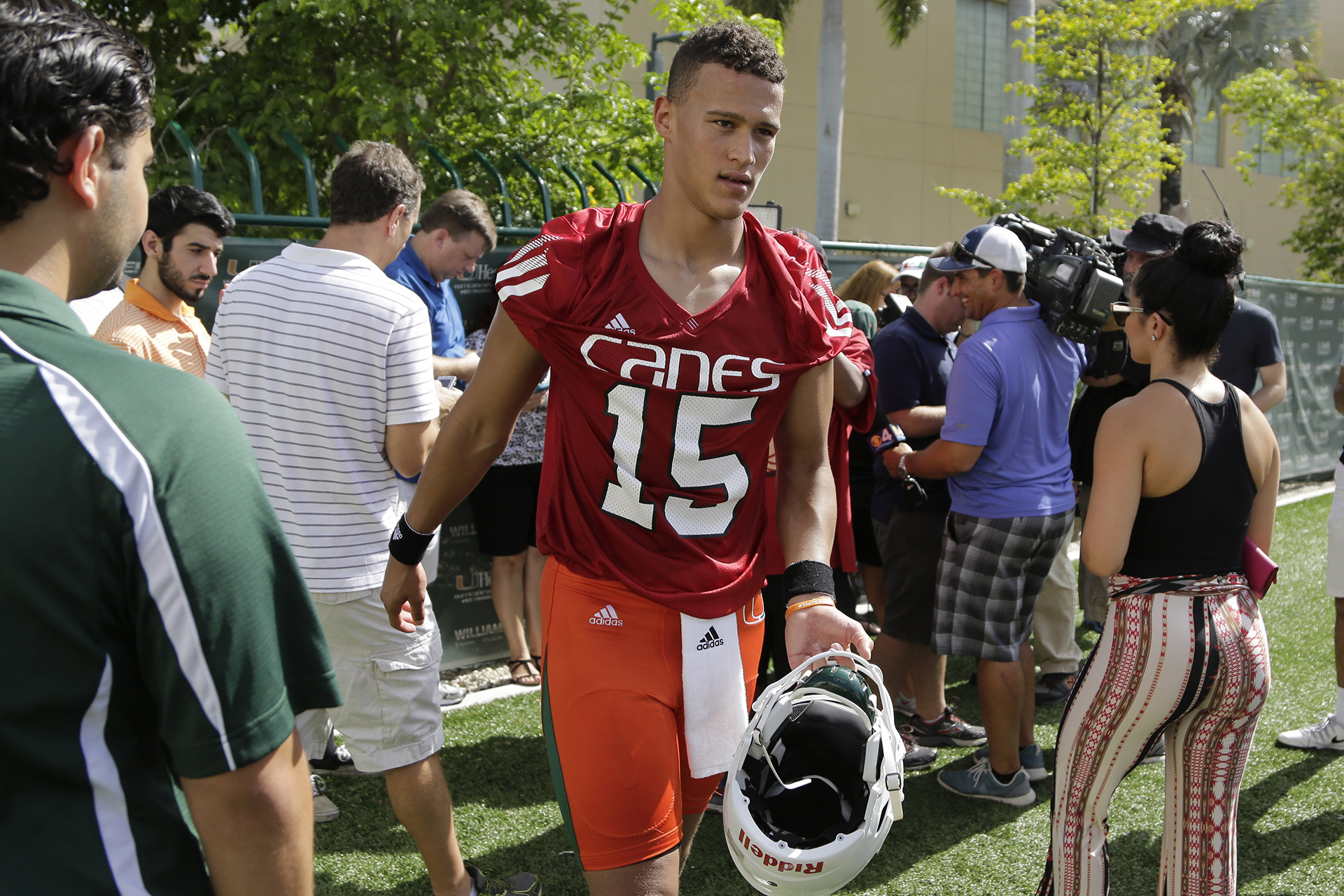 That April, just as I was about to graduate and report to Miami, Ryan Williams tore his ACL in spring practice.

I was going into Miami as a true freshman to compete for a starting job.

Those first few months at Miami are honestly kind of a blur. I arrived on campus in May, and after a pretty intense quarterback competition, I was named the starter just over a week before the season opener. It was pretty surreal — just a few months after calling out mock plays to myself in my bathroom mirror in L.A., I was on the road in Louisville, calling out real plays as a true freshman in an ACC game.

We lost that game at Louisville and then won two straight, but I don’t think I fully understood what was happening to me until Week 4.

We were on the road.

It was sold out. I’m talking almost 92,000 people — record attendance for a stadium that had been around for 90 years. And that place was rocking. It was so loud that when I got to the line to run our first play, my facemask was literally rattling.

You can’t simulate that in your bathroom mirror.

That was the moment when I stopped and said to myself, You’re not in high school anymore. 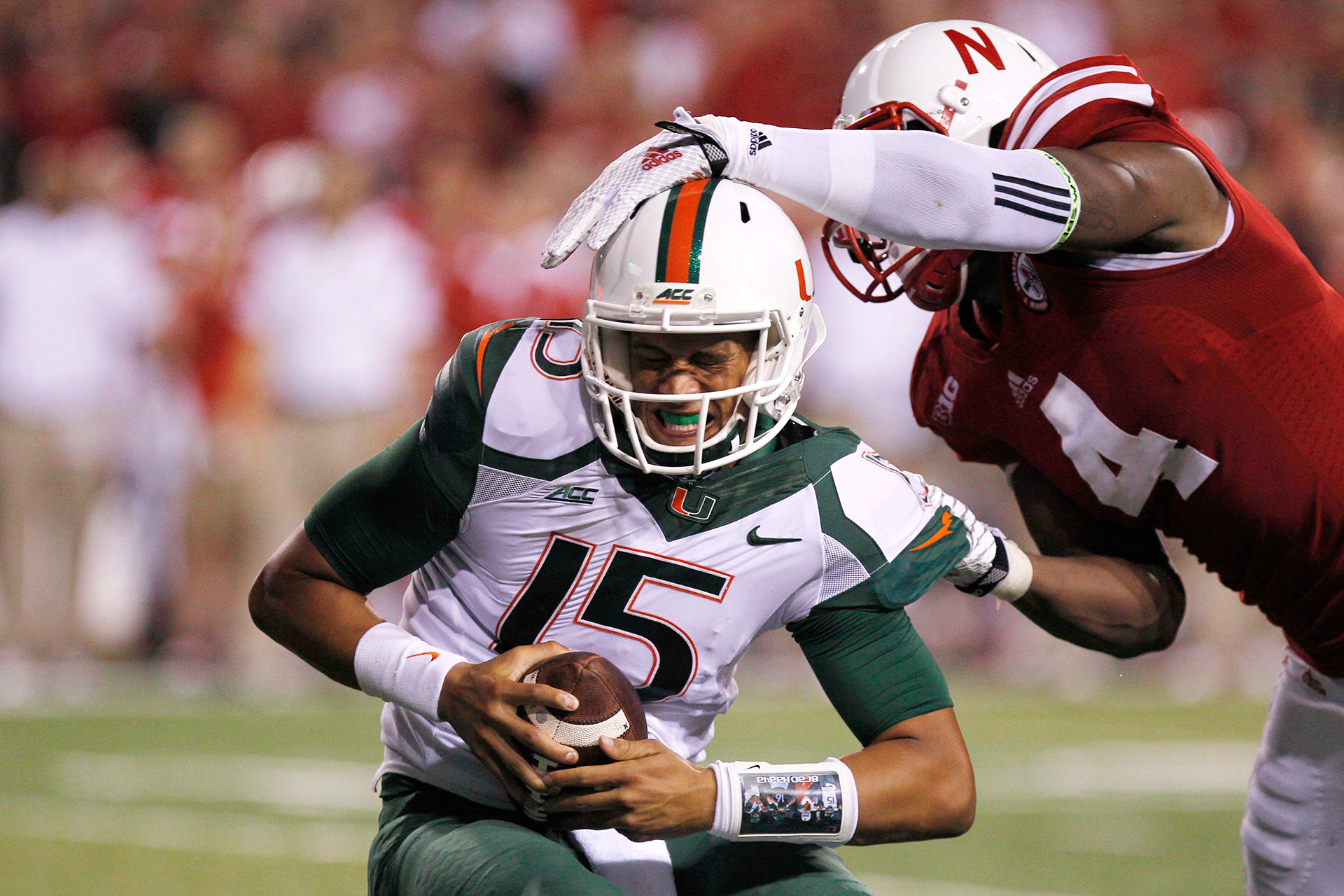 I threw for 359 yards that day, the most by a true freshman in a single game in Miami history. But we lost the game, and my true freshman season turned out to be a tough one. We finished 6-7 and lost in the Independence Bowl.

We came back last season and took a good step forward, finishing 8-4 in the regular season. But that’s the thing: An 8-4 regular season is a good season at a lot of schools. Not at Miami. Down here, that’s average. People expect 10 wins or better. And they should. That’s a standard set by those teams in the ‘80s and early ‘90s and by that 2001 team I watched when I was a kid.

It’s a standard this current team shouldn’t — and doesn’t — shy away from.

I knew when I came to Miami that we wouldn’t turn things around overnight. It was going to be a challenge — a process. We won six games in 2014, eight in 2015, and now our goal is to get back to that 10-win mark in 2016. Coach Mark Richt has brought a new energy to this program. I can feel it in the meeting rooms, at practice and all over Miami. Everywhere I go now, I have people coming up to me saying, “Good luck this season,” or, “Can’t wait to see you guys do something special.” 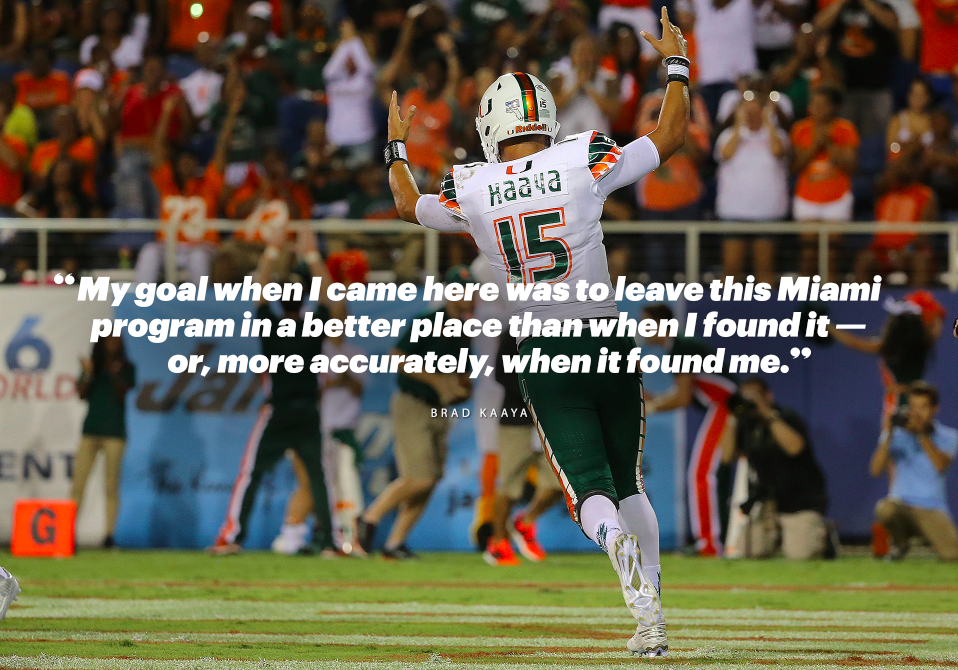 That fanbase that took over Los Angeles in 2001, that team that dominated Nebraska — we can be that again. But it’s gonna take everybody. It starts with the players and coaches, and then it’s on the rest of the South Florida community and fanbase. I think Miami truly is a sleeping giant. This is a place where, if we can win and build some momentum, we can win big, just like Hurricanes teams of the past have.

My goal when I came here was to leave this Miami program in a better place than when I found it — or, more accurately, when it found me. It’s truly an honor to wear this jersey, knowing all the great players who wore it before me and what they stood for. But now, we’re trying to blaze our own path and create our own identity as we move into this new era of Hurricanes football.

We’re still The U. I think a lot of people have forgotten that.

Now it’s our job to make them remember.