The Best Play I Ever Made

I loved growing up in Northern California in the 1970s.

It was the perfect place for a girl like me: an overactive tomboy. I jumped off of roofs into backyard pools. I climbed to the tops of the highest trees. I did the sort of stuff that had my parents panicking on a daily basis.

Back then in San Jose — whether it was skateboarding or hiking or playing sports — girls were encouraged to be just as scrappy as boys.

When I was about seven or eight, the town I lived in started a rec soccer league. My parents — who had been looking for something for me to do that was a little less … death-defying than, say, roof-diving into our neighborhood’s swimming pools — were all too happy to sign me up.

And my parents went all in. The same year I signed up for the youth team, we got season tickets to the San Jose Earthquakes. My parents would take me to the stadium for games, and from the very first one we went to I was just transfixed by the players — one in particular: George Best. 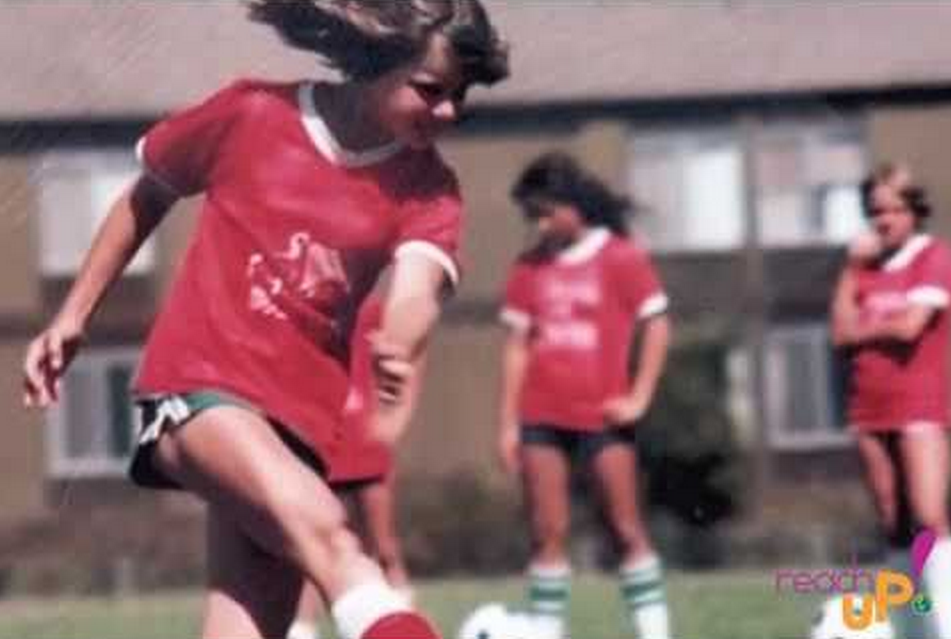 For a California girl just starting out in soccer, there was no one better to try to emulate than George Best, one of the best players in the world. He was a legend. And here he was, in San Jose. He made soccer look so easy — the dribbling, the scoring. And he did it with a smile on his face.

When I saw him, I said to myself, I want to do that when I grow up. That looks awesome.

The Earthquakes held a camp every summer, where players would serve as coaches. George Best wouldn’t attend, but every day the camp held a competition. If you were the best player during the morning session, you could wear a game worn jersey in the afternoon. Not keep. Not have forever. Literally, you just got to wear an old jersey for a couple of hours.

I was determined to win.

And one day after the morning session, the campers gathered around. The counselors called out my name and they handed to me one of Pelé’s jerseys, who’d also joined the NASL with the New York Cosmos. Running around that afternoon, with Pelé’s name on my back in an oversized Cosmos shirt, I felt like I could’ve played for Brazil if they called on me.

And that’s how it all began. I wanted nothing more than to be a soccer player. From there, I went on to play in high school, in college (first at Berkeley and then at Santa Clara) and then for the USWNT.

I know that many people are aware of what I did when the U.S. won the FIFA Women’s World Cup in 1999. They probably think that I would pick my game-winning penalty kick against China in the final as the best play I ever made. The goal, the sports bra — they defined my career.

But the truth is that the best play I ever made happened 20 years earlier, when I was 11. Don’t get me wrong, the penalty kick that beat China was an incredible moment. But if not for the play I made in 1979, who knows what would have happened on July 10, 1999. 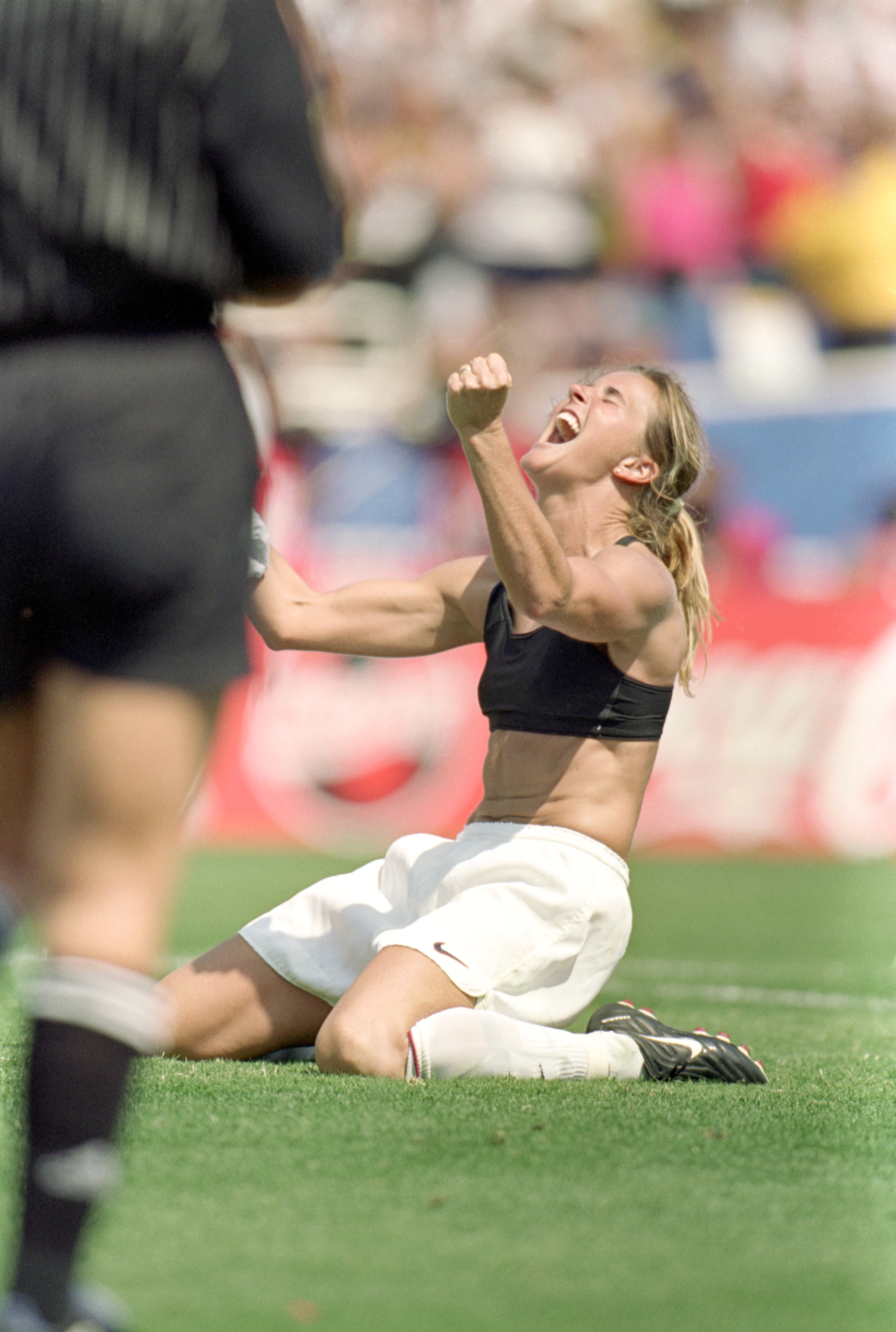 I remember the ripple of the net after the ball hit the back of the net.

Brandi Chastain relives a triumphant and influential goal she scored as an 11 year-old. (2:09)

Like I said, my parents really went all in on soccer. My dad, who’d never coached a team in his life, became the coach of my rec team. He even came up with the name: the Blossom Valley Horizon. We were the Horizon because, according to him, the future of women’s soccer was just beginning. He may not have known it at the time, but he was on to something.

My dad had been in the Marines, so he had no problem ordering us around, making a bunch of preteen girls do push-ups and sit-ups, and then having us run laps around the field in lines of two — always with those lines of two.

But he also had this really soft-hearted side. If a girl was having a tough game, he had no problem putting his arm around her and saying, “It’s going to be O.K.”

And my mother, God rest her soul, would show up at every game with her megaphone, shouting and cheering us on.

No games were more important, though, than the ones we played against our rivals, the San Jose Rovers. Those games definitely brought out the most fans — parents, siblings and grandparents. We’d show up to the field in our orange and yellow uniforms with the black trim, and we’d hang this beautiful banner that Carmen, our assistant coach, had made of a sun coming up over the horizon.

And when the whistle blew, we’d push, we’d tackle, we’d just go for it.

A few weeks before our match against the Rovers though, I had hurt my right ankle. During our game, I had been trying to strike and pass with my left foot, something I hadn’t really done before. As we neared halftime, the score was 0–0. One of my teammates took a shot on goal that rebounded out towards the top of the box. It was coming right at me, bouncing at just the perfect height.

I locked onto the ball. I’m going to hit this ball so hard. I ran through it with perfect left-footed volley technique … and it… just… took… off.

The ball left my foot like it had been shot out of a cannon, I don’t think the goalkeeper even had time to react. It didn’t get higher than two feet off the ground. It was the the purest, most perfect kick. It almost felt like I hadn’t even hit it. But as soon as it left my foot, I knew it was going in.

I just watched it fly, zooming past opponents and teammates. I still remember the ripple of the net as it hit.

I turned around to see my teammates running towards me. We fell together in this chaotic mosh pit of 11-year-old girls.

That’s my favorite goal ever. And, just as important, the Horizon beat the Rovers that day 2–0.

Soccer gave me the confidence as a young girl that I could do anything, and there isn’t a better example of that than my goal against the Rovers. Right foot or not, I was going to kick that ball and score that goal. From then on, no matter how bad I’d been playing, no matter what I was going through, I knew that I could handle anything. There was nothing I couldn’t do. And my left foot also became a big part of my game from that play on. I just told myself: You’re going to be a two-footed player now.

Fast-forward to 1999. At the World Cup, I was coming off a brutal missed PK against China in a game only a few months before. I had taken that shot with my right foot. So when the final at the Rose Bowl came down to a penalty shootout, I decided switch things up and shoot with my left foot. I knew that this time I was going to figure things out. I was going to rise to the challenge.

My goal in the World Cup was a touchstone moment for a lot of girls, and our team defined soccer for a whole generation of girls who came after us. But for me, when I think of that goal, I also think about that 11-year-old girl in San Jose playing for the Horizon — when the future of women’s soccer was just beginning.