While I was playing at Texas, I had this little tradition to get my head right before a big game.

As the team went out for the coin toss, I would find a place on the sidelines where I was alone, take a knee and for a few moments I’d just be present in my surroundings. I’d look at all the fans in the stands. I’d look at the band all dressed up and jumping around. I’d take a few moments to thank God for the opportunity in front of me. And then I’d look at my teammates, all of them standing there with this focused intensity, ready to compete. I’d take a mental picture of everything happening, and feel this tremendous sense of joy and pride to be there in that moment, as part of this thing that is so much bigger than me.

Once I took that time to acknowledge what was going on around me, my focus shifted entirely to my job and what I had to do. The noise from the crowd and the band became secondary. I didn’t get swept up in my emotions or the setting. For the next three hours, it was all about executing what I had prepared for that week – and my entire life up to that point, really.

Even though I was prepared, it was never easy. It’s been a few years since I suited up in burnt orange, but I still remember the nerves I felt leading up to the big games. I especially remember how tough it was to deal with them as a younger player, like many of you are.

My second collegiate start came when I was just a redshirt freshman playing against #1 ranked Ohio State. We’d just gone undefeated and won a national championship, and the expectations couldn’t have been any higher on myself and our team. What I remember maybe even more than the game itself was the pressure I felt beforehand. It was just nuts. In the months leading up to kickoff, that game was all people could talk about. It was brought up during every conversation I had, whether it was with a student, professor or the waiter taking my order at Trudy’s. I felt overwhelmed. I was only a 19-year-old kid from a town with a population that wasn’t big enough to fill up a single section of our stadium, but I somehow found myself in control of this thing that meant so much to so many people. I didn’t know how to deal with it.

But here’s the thing I learned eventually: The pressure doesn’t go away. It’s always there. You’re at Texas — the expectations never ease up. So what I discovered over time (and what you will as well) is that the pressure is a good thing. Eventually I learned to feed off of it. I even craved it, because it pushed me to be the best version of myself.

Now I feel for you guys as Notre Dame comes to town, because I remember how long it took for me to develop that mindset. I was lucky enough to be in school before social media blew up the way it has. I’m sure you have plenty of people telling you how great and terrible you are at all times as soon as you open your phone. Try to shut off that noise. Regardless of how much pressure you feel heading into Sunday, remember that the only thing you’re entirely in control of is your performance. I’m telling you now what it took me years to learn and accept: If you go out there and play to the very best of your ability, that’s all you can ask of yourself. And more times than not, it will be enough to win. 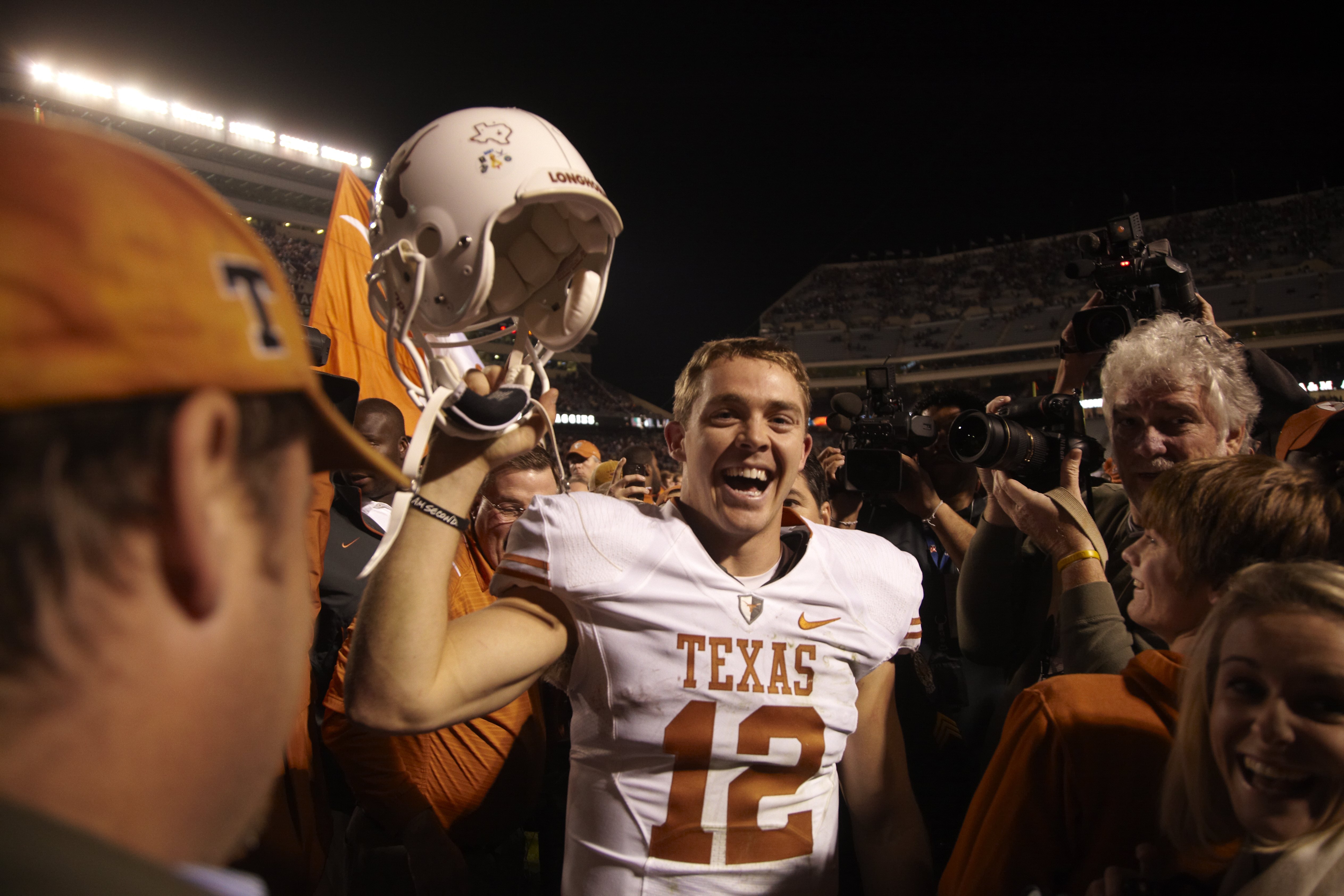 I’m entering my 7th season in the NFL, and when I look back on my college days, sometimes I think about some bad plays I made or ones I wish I could have back. But most of all, when I look back on my time as a Longhorn, what I remember most is just how fun winning was. I remember listening to Coach Brown’s postgame speech after a big victory, and then the entire team singing “Texas Fight!” together at the top of our lungs. I remember that feeling of walking to class with my teammates and having everybody we passed throw up their horns and congratulate us. I distinctly remember the pride I felt, but also the pride other people felt because of our performance. When we won, we lifted up the entire campus. And I remember wanting to have that feeling all the time. Our entire team did. I wanted to win for our school, I wanted to win for our coaches and I wanted for my teammates. That was part of what made us great.

The work to achieve that winning feeling never stopped. Every day of practice was a legit competition. We used each other’s talent as a resource to get better. I was out there trying to throw against the likes of Earl Thomas, Aaron Williams, Michael Griffin and Aaron Ross — guys who would go on not to just play in the NFL, but become very good NFL players. Practice was so difficult that the games were just fun because we finally got to unleash all that competitive energy we built up on some other team.

As time went on, we all felt like we grew together. We wanted to see each other get drafted and achieve our dreams, and we all pushed each other to get to that point. Those bonds never break. To this day, I love checking in with my old teammates and talking about old times.

We reminisce about bowl games, 45-35 and the great run in ’08-‘09 when we only lost one game. We laugh about things that happened in the locker room and in the dorms. And we thank each other, even without directly saying it, for being a vital part of the period of our lives when we became men.

Someday, many years from now, maybe you guys will get together and look back on your time at Texas. And you’ll reminisce about some disappointments from last season, when you lost some close games, but won some big ones. Then you’ll remember that season opener against Notre Dame, when you all realized just how talented you were, and showcased it in front the entire nation. You’ll look back and take pride in how you lifted Texas football out of the lean years and defined a new era of greatness. In some ways, I’m jealous of you. You have so many memories just waiting to be made. 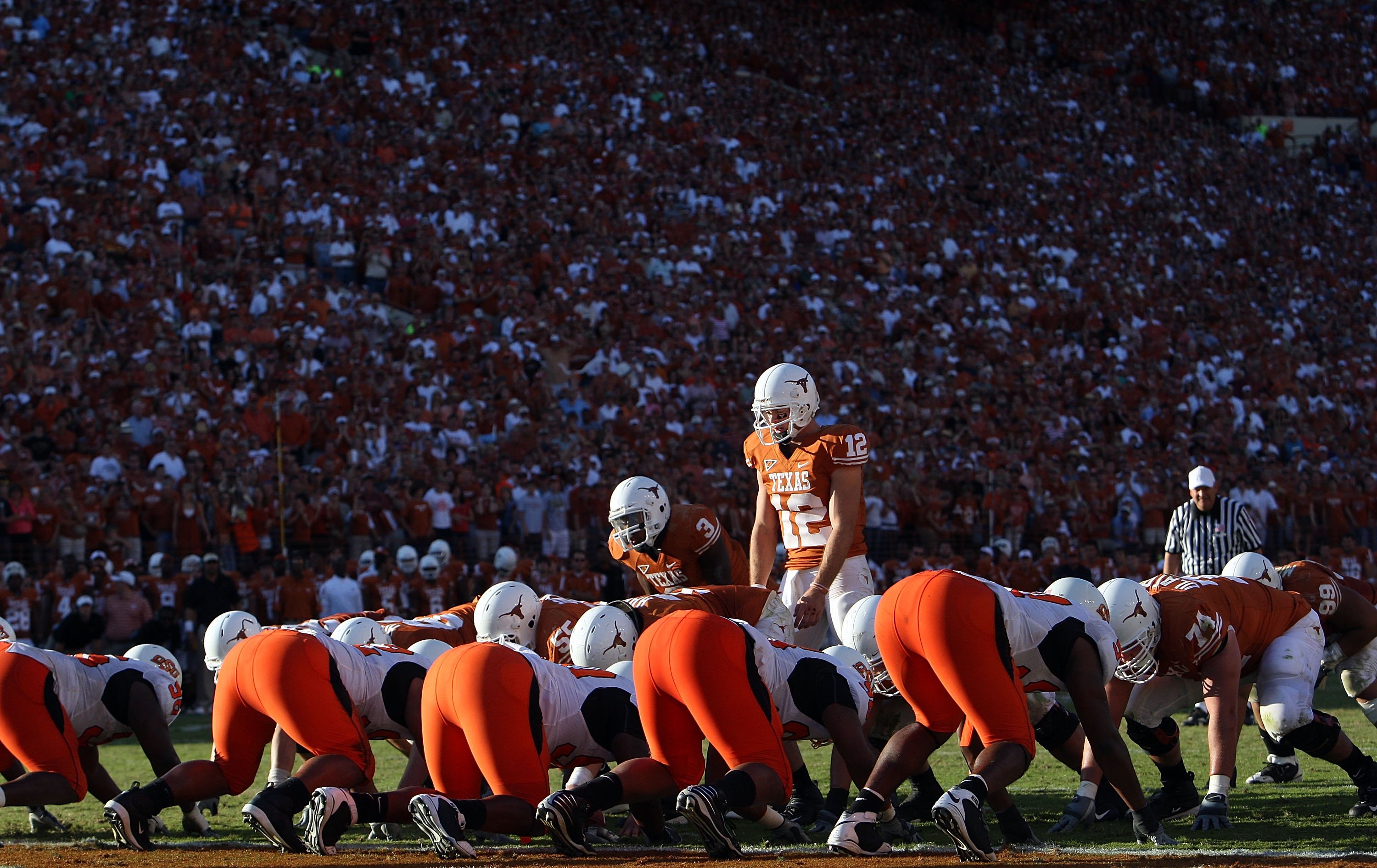 I’ve gotten to know Coach Strong, and I really believe in what he’s building. He values the same things that helped Mack Brown make this program great – a strong belief in family, close relationships with his players and a deep love for this University. When I was in school, I felt so proud to play for Coach Brown, and I can see that Coach Strong has instilled a similar pride in all of you.

I like where our program is right now. I really do. I had the opportunity to work out with a few you this summer, and it made me feel even better about the team. The talent is there. I see flashes of the same greatness that I was fortunate to be around while I was on campus. Yes, people have been frustrated with the results the last couple of years — and rightly so. But if you look closely, you can see that we’re turning a corner. You have the opportunity to erase a lot of bad memories for every person who feels a little bit of pride when they see burnt orange.

I don’t need to tell you that Notre Dame is good. You saw that last year, and I’m sure you’ve been hearing about how good they are just about every day since then.

But on Sunday, last year won’t matter. Not one lick. Your record right now is 0-0. Everything is ahead of you.

Trust that your coaches are going to have you prepared. Trust your reads and your instincts. These games are why you were recruited to play here, so don’t try to be a superhuman version of yourself. Be the player you know that you are. You made it to Texas because you’ve played very well in a lot of games throughout your lifetime. This is just another opportunity to showcase what you were born to do.

Before kickoff on Sunday, find a quiet place on the sideline. Take a knee and look around the stadium. Breathe in the air and appreciate the atmosphere. And take a moment to collect your thoughts, say a little prayer and remember how blessed you are to be playing the greatest game on earth at the greatest school on earth.

Then get on your feet, strap on your helmet and go show those boys how we play ball in Texas.