Thanks for the Memories, New York

The other day, one of my teammates comes over to me in the clubhouse and says, “Hey, you see what they’re gonna do to you in New York?”

I don’t know what he’s talking about.

I’m like, “What’s up? They gonna give me a pizza or something?”

He says, “Nah. Your last game, the fans are gonna pull their pants down.”

Then he shows me an article on his phone about some guy who’s trying to get everybody in Yankee Stadium to moon me.

Let me tell you something. If 50,000 people moon me, I promise you two things.

First, I’m gonna laugh so hard I might start crying. 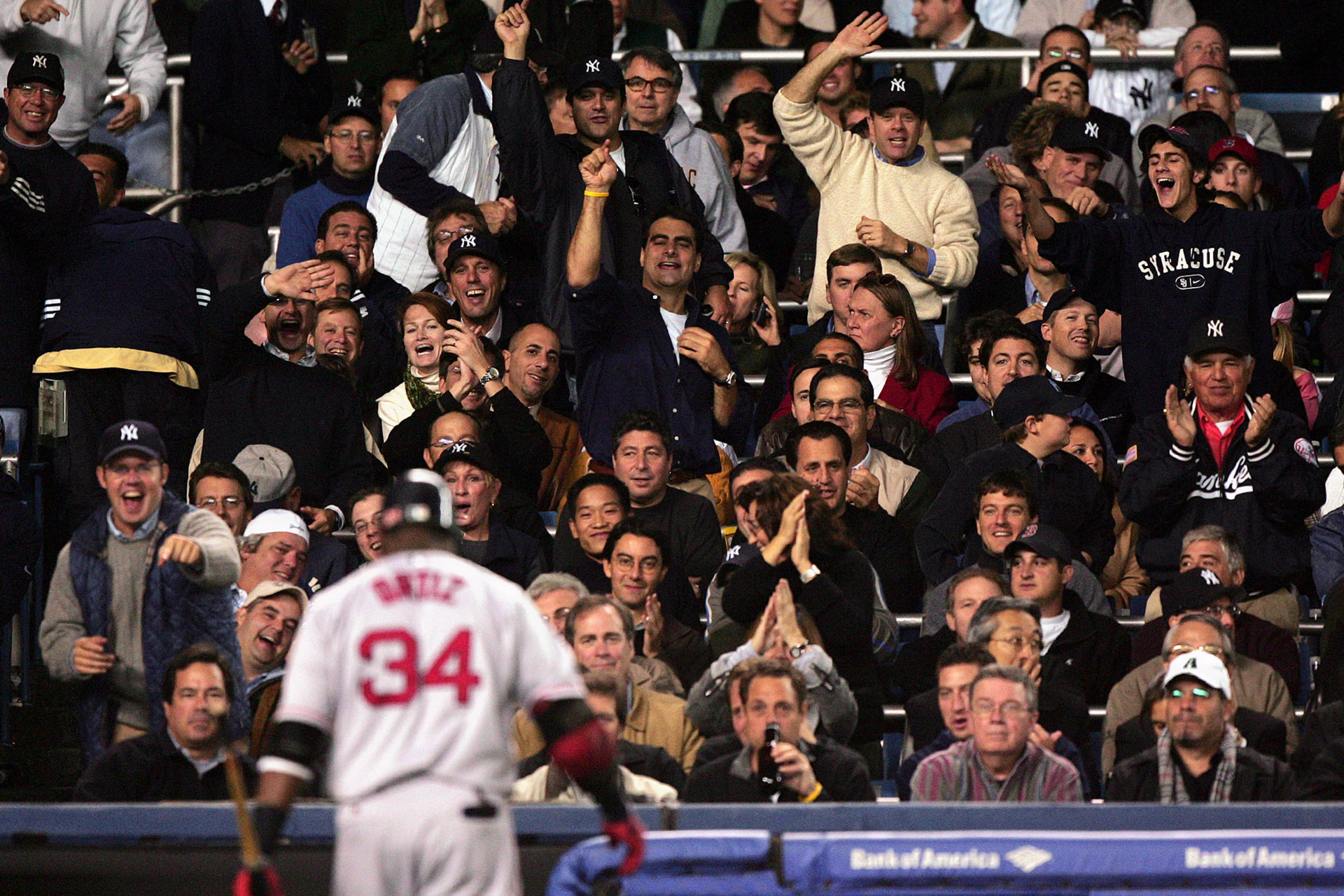 Then when the tears dry, I’m gonna step up to the plate and try to hit the ball all the way to the choo choo train. You gotta be careful. You guys don’t have Mariano no more, you know what I’m saying?

Listen, Yankee fans. I gotta admit something to you. And I’m serious about this. I got love for you.

It’s just a little bit of love, but I do.

When I came to this country and I was trying to make it to the big leagues, I looked at guys like Derek Jeter and Mariano Rivera, and I was almost in awe. When I got to play against the Yankees my first few years, I would watch some of the things Jeter would do in the field like I was just a fan.

I learned a lot from watching DJ. I never got to tell him that when he was playing, but I did. The way he handled his business, and how much respect he had for this game, it made me want to be a better player.

For real, I looked forward to hitting doubles against the Yankees so I could get to second base and say what’s up to DJ.

He never said too much. If I wasn’t hitting good, he might say something like, “How you doing? Haven’t seen you in a while.”

Our rivalry with the Yankees made me who I am. The intensity of that competition is what I’m gonna miss the most when I’m done. I could wake up in the morning and my body could be feeling like shit, but as soon as the bus pulls up to Yankee Stadium and I see that white fence on the upper deck, I’m like, It’s on.

Me, Manny and Pedro used to sit in the dugout watching the Yankees’ pitchers warming up, and we’d say to each other, “Alright, how we gonna take these mother******* down today?”

Every time me or Manny stepped to the plate, it was a psychological battle. With guys like Pettitte and Mussina, we lived off their mistakes. That’s what we were hunting. If those guys missed and left something over the plate and we didn’t make them pay, it was like somebody stole your child.

If Mussina hung a breaking ball and I didn’t hurt him, I would think about it for days.

When those series were over, you would be exhausted — mentally, physically, emotionally, everything. 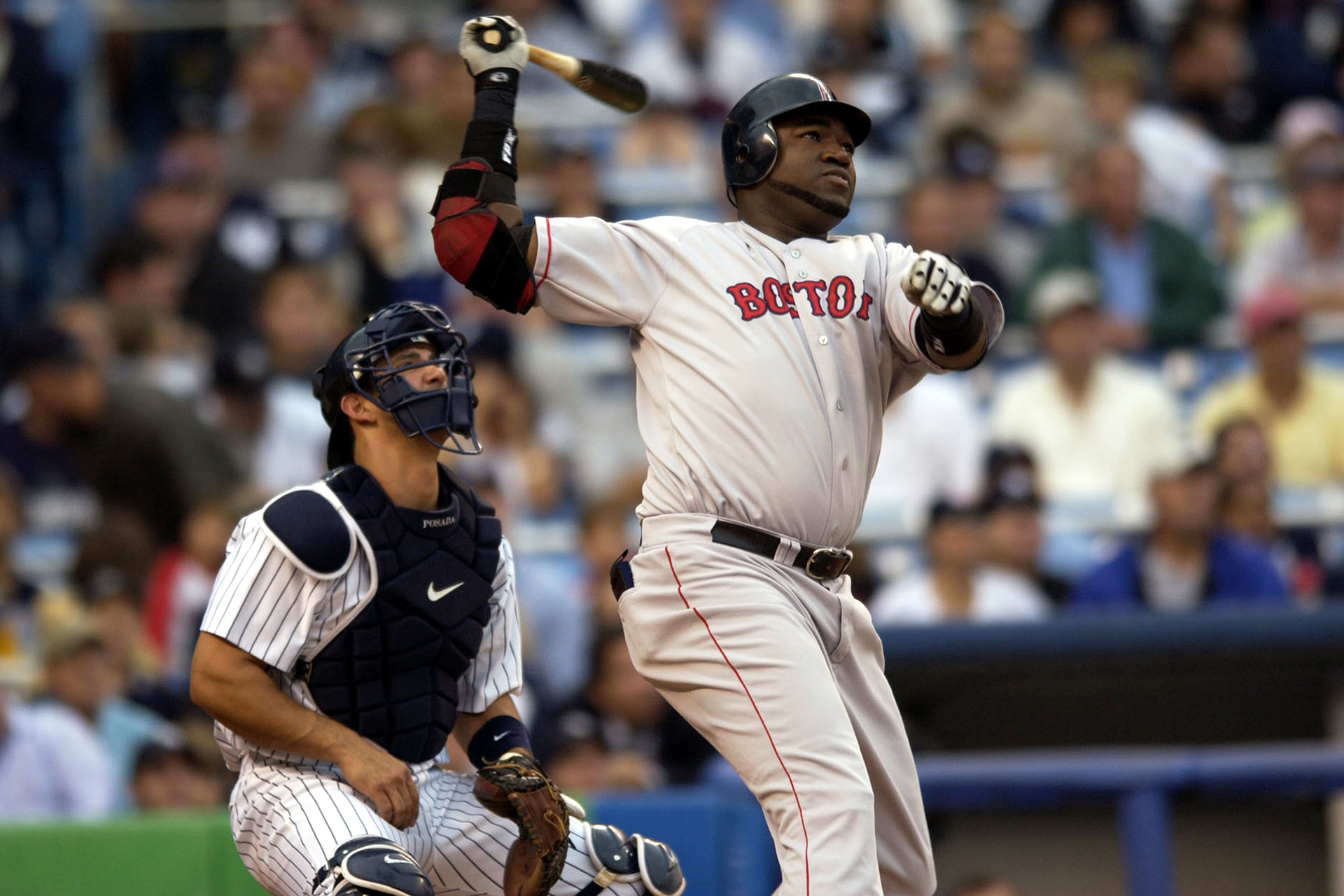 Playing against the Yankees was just different. It was war.

You gotta understand what it meant to me, Pedro and Manny — three guys from the Dominican Republic. In our country, the Yankees are huge. Back in the day, they were pretty much the only big league club on TV. When you walked around Santo Domingo in the ’90s, you would see so many Yankees caps.

No Red Sox. No Cardinals.

I got friends and family who love me, but to this day they’re still die hard Yankee fans.

Now, it’s a little bit different. But back in the day, everybody in my country dreamed of going to New York. Not even as a ballplayer, I’m talking just for the opportunity to work a regular job. We looked at New York City like the American dream. The Yankees were like a symbol of everything. If you wore a Yankees hat, maybe your cousin or uncle sent it down to you from New York, and it was like that hat was a symbol of everything you were dreaming to be.

In my country, everything was a hustle to try to get to a better place in life.

My mom did everything at home, and she still had side-jobs to get us extra money. In those days, you could buy clothes real cheap in Curaçao, so she used to take shopping trips to the island. She would load up two suitcases full of dress clothes and bring them back to Santo Domingo to sell them to the workers at the hotel resorts.

It was a way to make a little bit of extra money. She would do whatever it took to make sure we were fine.

When I was playing Double A ball in ’97, I got her a visa to come to the States for the first time. It was just the two of us chilling in Connecticut for a few days. She got to visit New York City before she flew back home, and she was just so happy. Her dream, her whole life, was to give her kids an opportunity. New York City, to us, was like the capital of the world.

My mom died in a car accident in 2002, before I got to the Red Sox and really started having success in the big leagues. My life has turned out amazing, but the only thing I wish is that she could be here for all this. When I take the field at Yankee Stadium for the last time, she’s not gonna be there to see it. That’s kind of tough, to be honest with you. But I know she would be so proud that we made it to the top of the world. 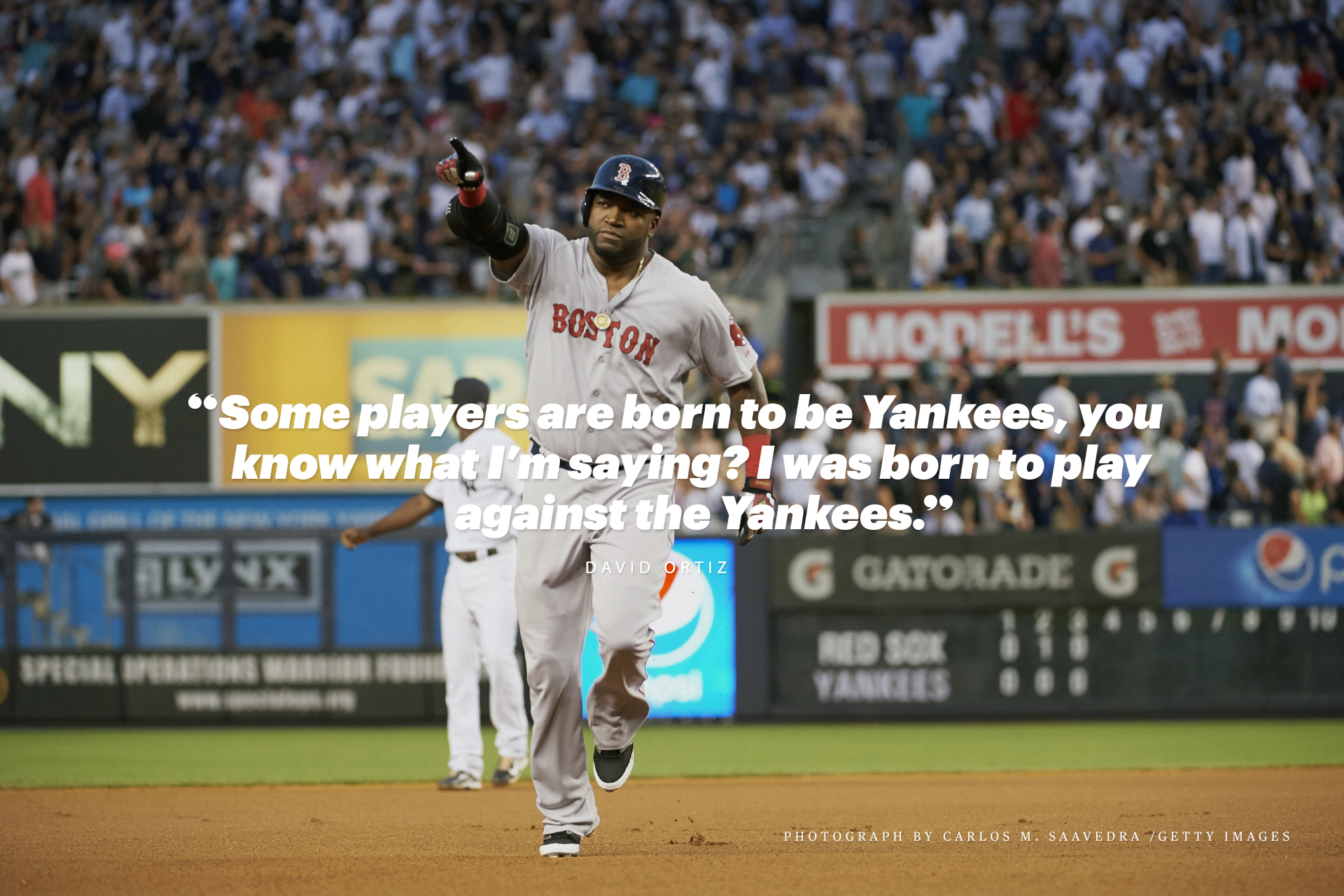 I know some people who grew up their whole lives here take it for granted because they’re used to it, but for my family, America is still like a dream. I don’t ever forget how lucky I am to be given this opportunity.

That’s why every time I get to play in Yankee Stadium, it’s just a different level.

When I’m standing in the on-deck circle and I hear all those boos, I get this feeling I can’t even describe. I’m so focused. My adrenaline goes through the roof. I’m totally locked in. The intensity is just not the same against another team.

Some players are born to be Yankees, you know what I’m saying?

I was born to play against the Yankees.

Boston is not just my team. Boston is my city. I consider myself a Bostonian, and it’s the thing I’m most proud of in the world.

But that’s why I’m gonna miss this rivalry so much. Because we were perfect opposites. Everything we had in Boston, New York had an answer for it.

Manny was the best power hitter I’ve ever seen, but Mariano had the single best pitch I’ve ever faced. Trying to hit for power against Rivera’s cutter was impossible. He broke so many bats that Louisville Slugger should be paying for his pool. Against Mariano, all you were gonna get was a bloop. He was on another level. 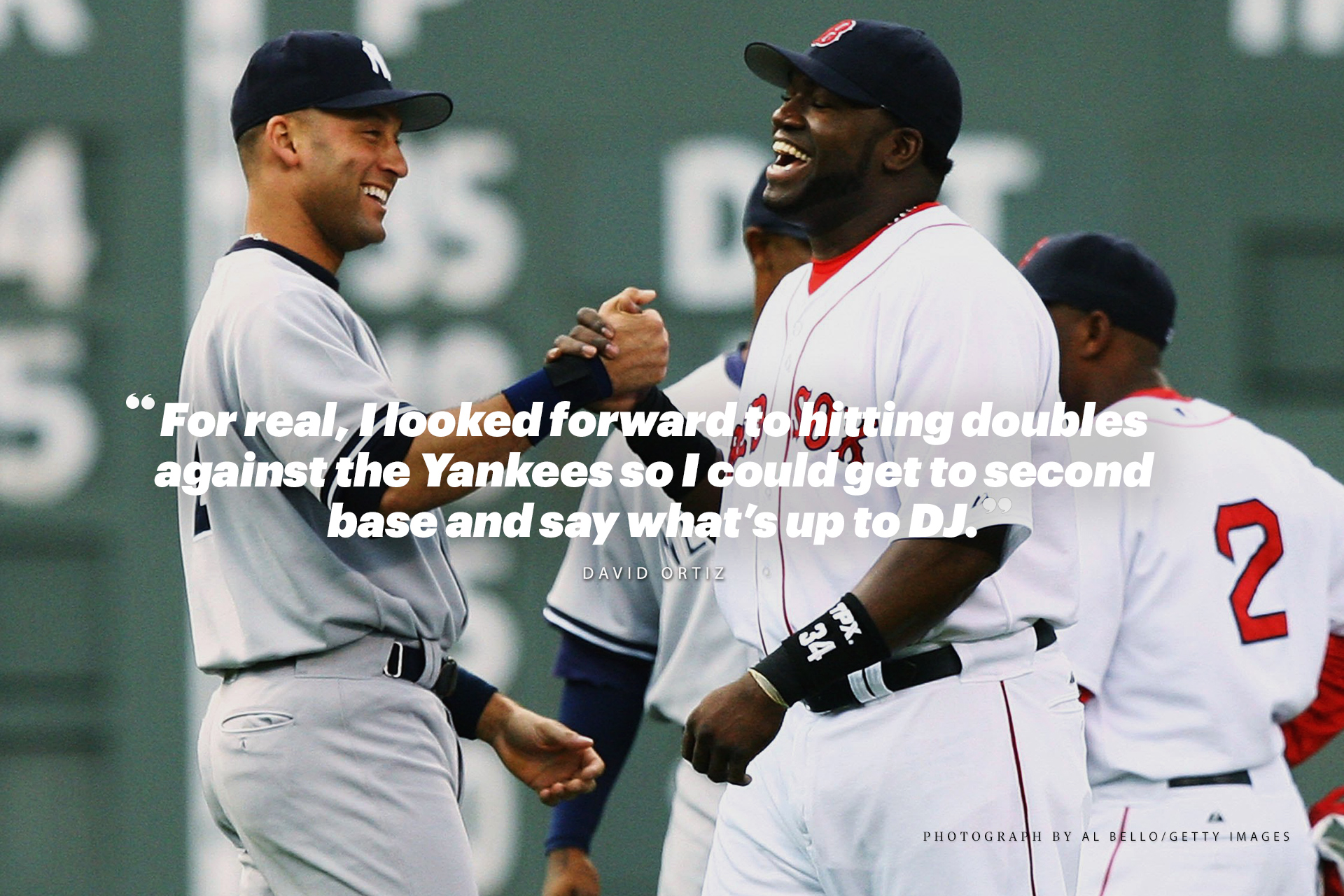 You look around now, and DJ is gone. Mariano is gone. Manny, Pedro, Moose, Pettitte, all gone. I’m the only old man still left.

That rivalry was good for baseball. I’m gonna miss it.

I remember when I came back to the Dominican for the parade after we won the World Series in 2004. My boy told me, “Bro, you should have seen it down here for the Yankees series. It was like the whole country was shut down. Every single game, everybody was gathered around the TV.”

After we won that World Series, everything was different.

Now, if you go down to the Dominican, you know what you see in the streets?

You see still Yankee hats. But you see a whole lotta Red Sox hats, too.

When I was a kid, I used to tear the heads off my sister’s dolls and use them as baseballs. I’d steal a broomstick from my mom’s closet and hit the heads over this fence. Whoom, Barbie went flying into the sky.

I used to dream that I was hitting home runs at Yankee Stadium.

Nowadays, I hope the kids doing that same shit are dreaming they’re at Fenway.

Yankee fans, I got one final thing to tell you.

Thank you. For real. You pulled the best out of me.

When you boo me, it’s one of the best feelings in the world.

I’m not gonna lie to you. Sometimes I get outta bed in the morning, and it’s like, Damn. What happened? I got old. It takes me a long time to get my body ready for these games now. But I guarantee you this. When our bus pulls up to Yankee Stadium today, I’m gonna be ready to go. And when I hear you boo me, I’m gonna try to hit the ball over that white fence, all the way to the mother******* choo choo train.