The Strongest Woman I've Ever Known

I grew up knowing my mom would get breast cancer.

It wasn’t a probability. It was an inevitability.

See, some people carry something called the BRCA1 mutation, which means the gene that’s supposed to produce the proteins that suppress tumors isn’t working properly. If you have a mutated BRCA1 gene, your risk of developing cancer — especially breast cancer — skyrockets.

My mom and her four sisters all had the mutation. Even if I barely knew how cancer worked as a kid, I knew it was something that was coming.

When my family found out about the mutated gene, everybody dove head-first into the research.

We talked about cancer all the time, from cousin to cousin, parent to parent, sister to sister, auntie to uncle. It was a part of our lives, a familiar thing we all knew would hit eventually. We just had to hurry up and wait.

We were open with each other. When you put a problem in a forum, you have multiple brains working on it instead of just yours. When you work that hard at understanding something, you become an expert.

You understand what it means when breast cancer moves from a breast to a vital organ, how it spreads and what the term metastatic means. You know how a tumor forms, what exactly it does to the body and the BRCA1 mutation’s role in the disease. You can answer your own questions instead of being at the mercy of doctors or other individuals. 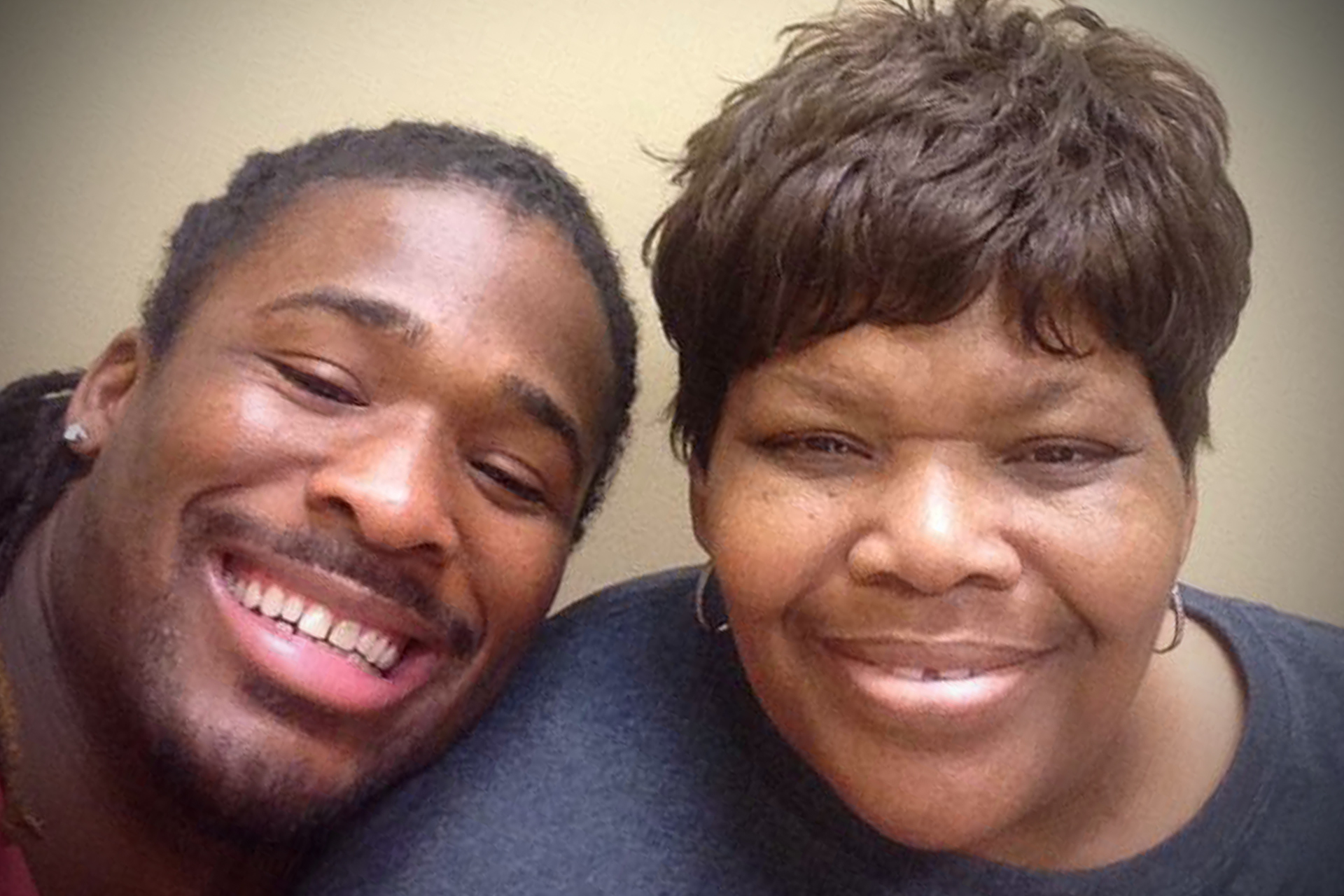 Knowledge is power, and we were arming ourselves for the toughest fight of our lives.

See, I come from a long line of warriors, as my mom used to say. When cancer struck my aunties we didn’t have time to grieve because we were too busy fighting the disease.

Each battle lasted a little longer than the one before, but we never won.

My mom was diagnosed at the beginning of the year, but she didn’t tell me about it until the summer, after my junior season at Memphis.

I was pissed. I felt like she was going through this battle herself and had robbed us of the opportunity to be her support system. When I asked her why she waited to tell us she simply said, “Hey, you were busy. I was busy.”

That was how strong my mom was. She didn’t want to burden anybody else. But it wasn’t until years later that I understood how truly strong she was. 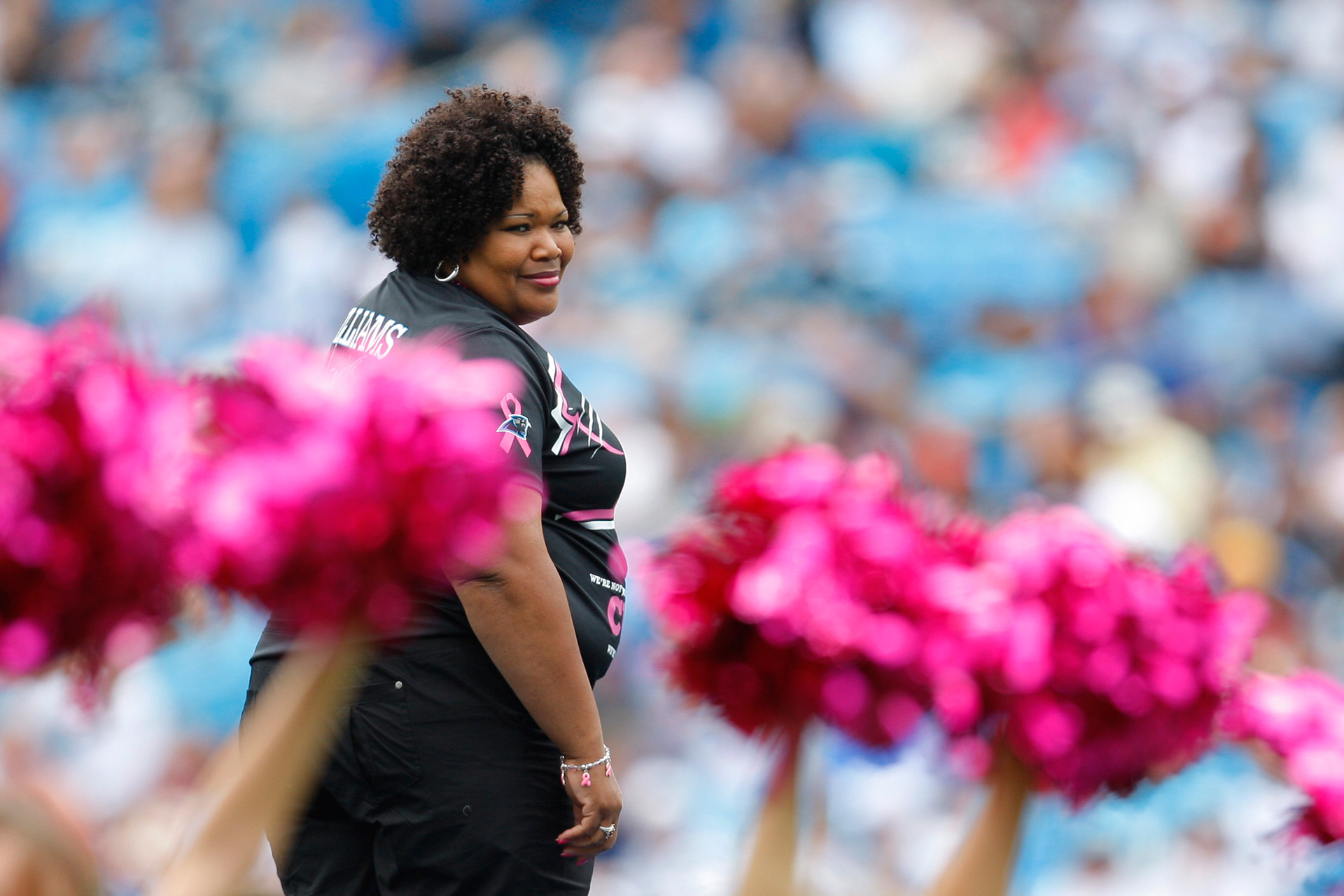 Mama’s breast cancer went into remission after her double mastectomy in 2004, but it came back in 2010. It was time to fight again, and I was determined to win this one.

Back to our protocols we went — the doctors, the chemo, everything. But it wasn’t enough.
On May 6, 2014, I got a call from my dad. I picked up, but my dad was too choked up to say anything. I was about to learn why. Dad passed the phone to my mom, and she told me the hospital was sending her home for hospice care.

“What does that mean?” I asked.

“It means there’s nothing more they can do for me. They’re sending me home so I can go in peace.”

My father and I were sobbing uncontrollably, tears running down our faces.

“Hey, stop crying,” my mom said. “Y’all are supposed to be strong for me, but now I gotta be strong for y’all! It’s O.K. I’m looking forward to picking out my casket and arranging everything for the funeral. I don’t want someone preaching over my body lying on me!”

She was so at peace with it. I didn’t know how she could be.

That’s what I want people with cancer — and people who know others who are battling cancer — to realize: Cancer is empowering.

She hung up the phone, and I was bawling like a baby. I called my friend, Jeff, to tell him the news. He told me about an experimental drug this doctor in New York had used on his grandmother (who had also battled cancer) with pretty promising results. Immediately, I called this doctor, explained my situation and asked if there was anything he could do.

He said he needed my mom’s medical records. I told him I’d get them to him as soon as possible.

On May 8, I flew down to Wynne, Ark., to surprise my mom for her 53rd birthday. I had a cake and everything.

When I get to my mom’s, she sits me down and gets right to business.

I had just wanted to talk to her about her birthday, but instead, she was talking about caskets, who she wanted at the funeral (and who she didn’t want at the funeral), how she wanted things arranged … it was too much for me. I wasn’t mentally ready to plan a funeral for my mom. I tried to stop her and tell her about the drug. 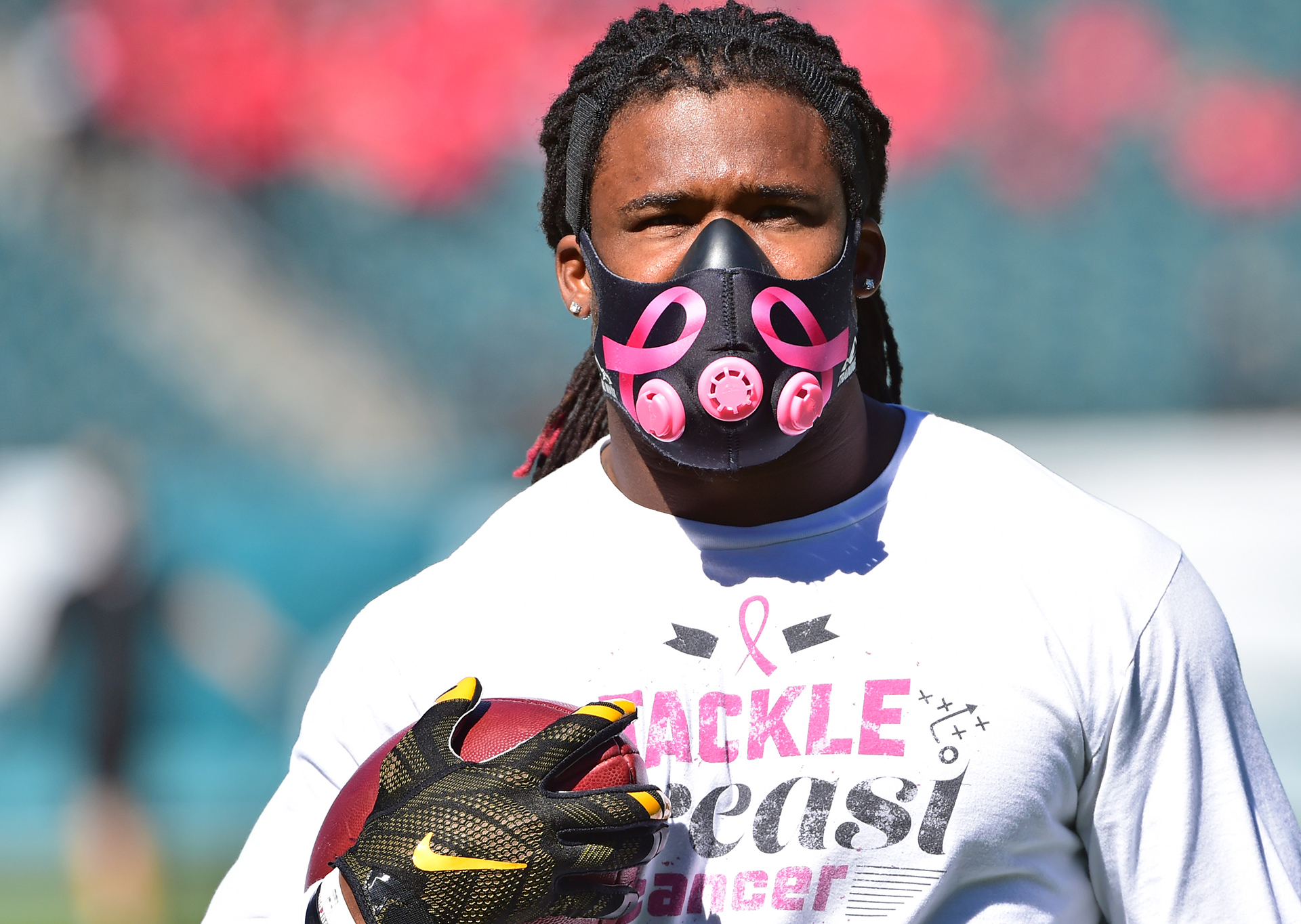 “No! I have to make sure I’m doing everything possible to get you better.”

She looked me square in the eyes.

“Son, I’ve had a great life. I wasn’t supposed to make it to 50, and now I’m 53. I stole three years. Look, you come from a long line of warriors. Don’t worry about me. I’m just worried about you and your sisters.”

Everything was so awful, and she was being so cool, so strong. But I wasn’t ready to give up on the experimental treatment. I was burning up the doctor’s phone, calling him nonstop, making sure all of the papers had arrived at his office so I could get my mom the drugs.

What I didn’t realize was, we only had eight days left.

On the morning of May 16, my mama passed away.

Later that day, I got a call from the doctor in New York.

I told him my mom had passed and said he didn’t need to worry about the treatment. Just as I’m saying goodbye, he stopped me.

“DeAngelo, there’s something I have to tell you,” he said. “There was nothing I could do for your mother. But I’m looking through her paperwork, and it’s astonishing.”

“For the last three years, your mother has been getting chemotherapy, and her body wasn’t responding to it. She was only going because it gave you and your family hope. She was a remarkably strong woman.”

I didn’t know what to say, so I just started laughing.

That’s what I want people with cancer — and people who know others who are battling cancer — to realize: Cancer is empowering.

You have a decision to make, and there’s no in between. There’s no, Eh, I’ll fight it today but not tomorrow. You either thrive, or you survive. My mother was the epitome of thriving. She lived.

And she still lives on to this day.

She lives on in me — when I think of her strength, her lessons, even her pet peeves. 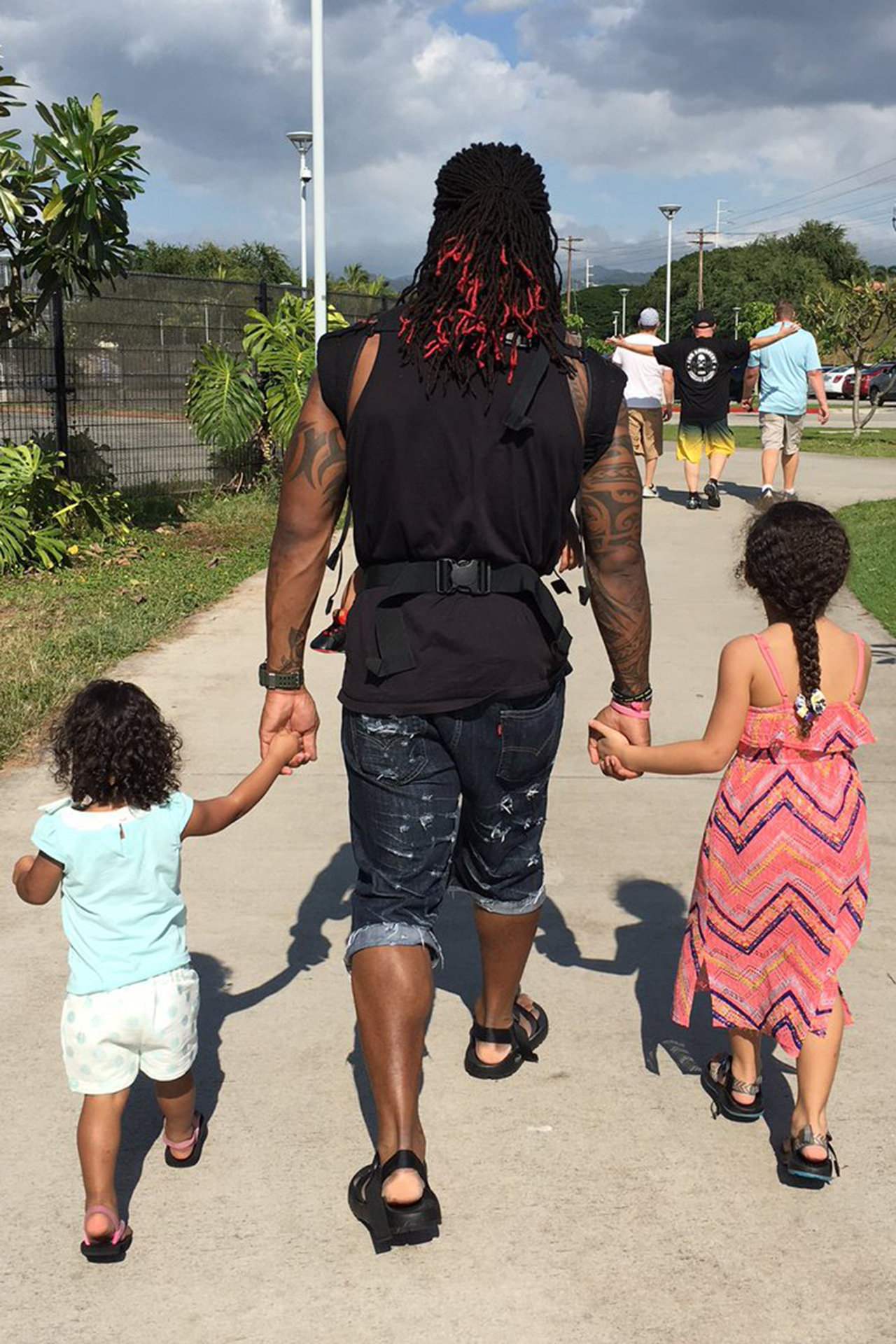 My mom absolutely hated when you would open multiple boxes of cereal. It was one of her golden rules: You don’t open a second box until the first box is gone.

But now I purposefully open more than one box. Every time I open another box of cereal, I look up to the sky and say, “Mama, I’m opening up this other box of cereal. I know you don’t like it, but guess what? I’m a grown man.”

She lives also on in my kids. My six-year-old daughter tells my two-year-old daughter all of the stories she can remember about her nana through her eyes. We can hear her telling those stories sometimes over the baby monitor, and it just rips my heart apart. And even though my son will never meet my mom, I know that all my children will pass down the stories they hear about her onto the next generation.

Last summer, I was working out with Captain Munnerlyn, who’s with the Vikings, and I brought my youngest daughter along. When Captain saw her, his eyes went wide.

“Bro. That is your mother, dude. She is the spitting image. It’s amazing how God works.”

“Yeah, man, I tell people that all the time.”

“Nah, bro, you don’t understand. That is your mother, up and down. Even her mannerisms.”

A lot of people know that DeAngelo Williams’s mamma died. But I want you to know that, more importantly, she lived.

To learn more about the DeAngelo Williams Foundation, visit https://deangelowilliams34.org/