“Drive, go hunting with me!”

Over the years, Brett used to say this to me all the time. We had a special connection on the field during our careers that resulted in big numbers, but we also enjoyed each other away from football. But that didn’t mean I was about to go hunting with him.

One day he asked me to go hunting, like he always did, and I said no, like I always did.

Then he asked why and I told him, “Do you see how black I am? If I’m coming running out of those woods, I’m going to get shot.”

Brett said, “But you’d be wearing the orange jumpsuit.”

Brett thought about that for a second and said, “Drive, I promise I won’t shoot you.”

He’s a guy with a legendary sense of humor, but what a lot of people don’t know about him is that he’s got a huge heart, too. I saw that when I was just a seventh-round pick out of Alcorn State trying to make the Packers roster in 1999. I was an afterthought. But I’ll always remember when I caught my first pass from Brett during training camp. We were doing this drill called Pat and Go, and I ran the ball back to him. When I got there, I said, “Hey Brett, my name’s Donald Driver.” He looked at me and said, “I know who you are.”

That whole camp, every time I’d catch a pass and bring the ball back, he’d say, “You keep catching like that, there’s gonna be many more.” Brett put his trust in me early on when he had no reason to. As someone who was just trying to establish myself in the league, coming from Division II, that meant everything.

Another thing people might not know about Brett — he’s cheap, man. Brett is not giving anything away. He’d take care of his offensive line — usually huge trunks full of meat, as an annual reward — but that was about it. All of us receivers had been complaining to Brett like, “When’s our turn?” And finally Brett said, “O.K., I’ve got something for you all.”

So we were all excited. If the offensive line is getting frozen steaks, what are we getting?

So one day, this guy shows up at the facility with a measuring tape. He says, “I’m here to take your measurements.”

The guy says, “No. For Wranglers.”

This was when Brett first started doing those Wrangler commercials — throwing the football in the backyard and driving around in his pick-up truck. That’s what he gave us for a gift: Wrangler jeans. We all wore them on the plane to Dallas for the game against the Cowboys. They didn’t cost him a dime!

Plenty of people have heard about Brett’s pranks — usually Icy Hot in the jock strap, or crouching down behind a coach in order to trip him. But I want it put out there on the record that there was one time when I pranked him. It was Brett’s birthday, and he and Doug Pederson, his backup, were running around the locker room, throwing cake at each other. I was sitting on the training table, getting ready for practice. Brett sneaks up on me and smashes a piece of cake on my face and all over my head. Now I’m gonna get fined for being late ’cause I got icing all over my head and I gotta go take a shower before practice.

So now I’m plotting my revenge. I see Brett’s helmet hanging in his locker, and I go over and pick it up. I had the perfect thing for him. There’s this arthritis medicine called Zostrix. It’s a clear cream. The thing about Zostrix is, as you sweat, it gets hotter and hotter and hotter. So I take the Zostrix and rub it all over the pads in his helmet.

Brett gets out on the field, and he doesn’t notice anything. He’s throwing the ball around, laughing. All of a sudden, he starts checking his forehead. He thinks he’s got a fever.

His head is burning up, and he wants to know what was really going on. Finally, someone on the training staff breaks the news to him.

“Driver got you with the Zostrix.”

Brett said he’d get me back, but he never did. 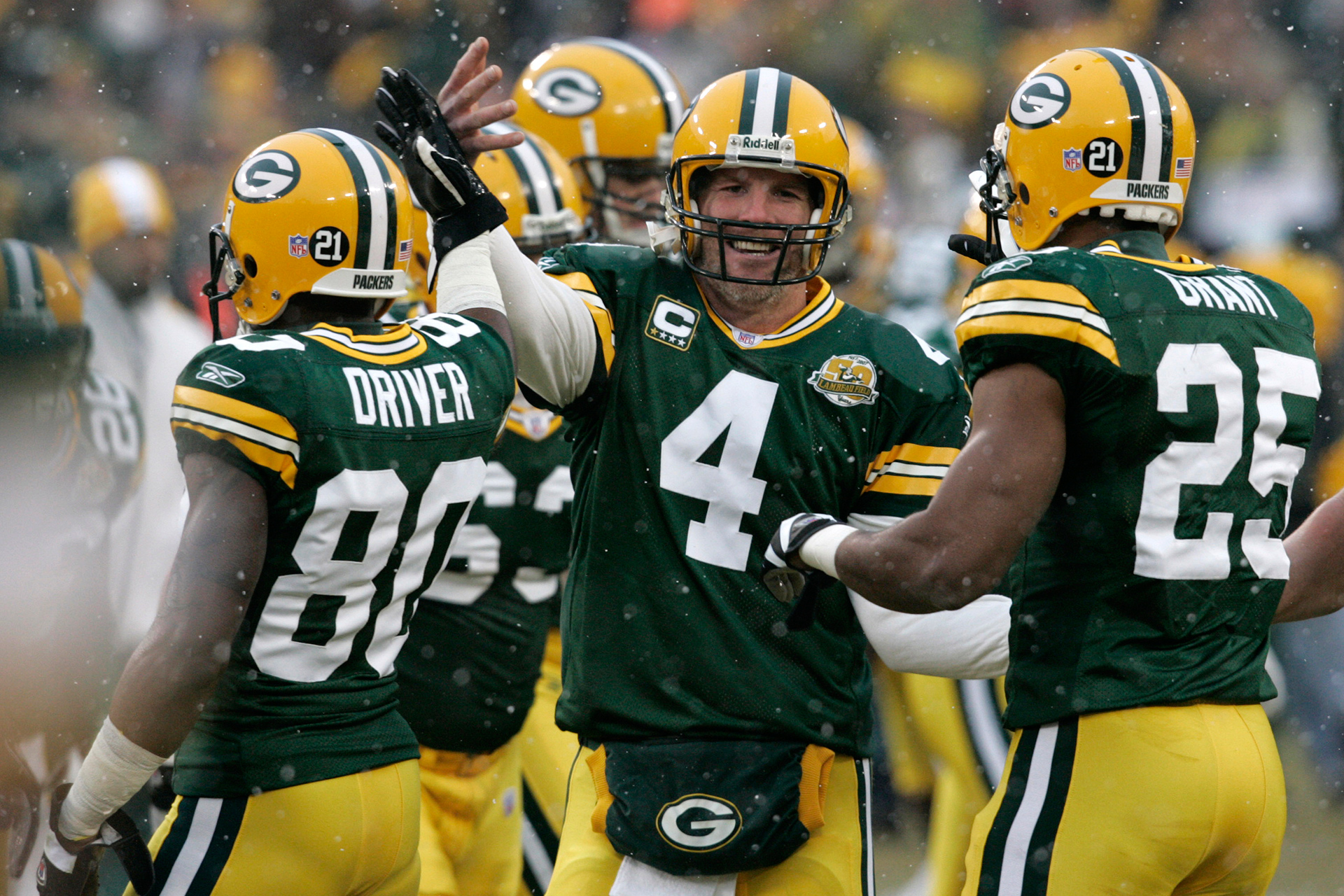 I experienced a lot of great moments with Brett, but without question, the moment I’ll always remember is the game he played after his father, Irv, died in December 2003.

We were on the road in Oakland. I was in my hotel room, and I was getting a bunch of phone calls from different friends in Mississippi. See, my wife is from Mississippi, and her brother went to the Southern Miss, like Brett. People kept calling and saying, “Did you hear about Brett’s dad?”

Brett was supposed to be out playing golf at the time, but I went down to his room anyway.

I knocked on the door, and he opened it and … well, we just hugged each other. He told me to come in. I remember we just sat on the bed and talked. His exact words were, “I didn’t even tell my dad I love him.” It was one of those moments I’ll always remember. He felt like that was what he needed to tell his dad.

I told him, “Brett, if you need to go home and be with your family, go. We’ll play this game for you.”

That night, he spoke to the team in the hotel. He said, “If you guys have my back, I’ve got yours.”

And we all stood up and started screaming, “We’ve got your back!”

It was really emotional. I told the receivers before that game, “Everything he throws up, we bring down.” And that’s exactly what we did — when Wesley Walls caught that first TD in the corner, it was on. That Monday Night Football game was the most amazing game I ever played, and I know anyone who experienced it would say the same.

If I could communicate one thing to Brett this weekend as he goes into the Hall of Fame, I’d tell him simply this: Thank you.

You were the one who believed in me when not too many other people did. The first time I walked into the Green Bay locker room, and I saw you and Reggie White there, I thought, I’m among legends, among the best to ever do it. To me, though, you’re not only a legend, you’re also an amazing friend.

But I’m still not going hunting with you.