All for a Smile

My little brother spent the first six years of his life in a hospital.

You know how when you go into a kid’s room, whether it’s your sibling’s or your friend’s or whoever’s, there are things that make it uniquely theirs? Maybe it’s their name on the wall, or posters of their favorite athletes or musicians. There’s the sports fan, the bookworm, maybe the kid who’s obsessed with the Ninja Turtles. They go in phases.

Well, Evan’s room for most of his life was a hospital room. He didn’t have posters on the wall or action figures in battle poses around the floor. It was just a fact of life — his and ours.

He was six when he came home for the first time, his thin body folded in a wheelchair. He had a tube coming out of the his neck, part of the ventilator that helped him breathe. And on his face, he almost always had a smile — that Evan smile that, even with the wheelchair, his physical state and the beat of his ventilator casting a dark cloud, was still bright enough to light up the room.

That was the thing about Evan. He couldn’t move, breathe or talk on his own. But, man, he had a heck of a smile. It’s how he communicated with us.

I never thought his condition was strange. It was all I knew. I was only three years older than him, so I thought it was completely normal. To me, my brother having cerebral palsy was just another part of life.

That’s the funny thing about having a serious illness in your family for so long: It becomes normal.

But make no mistake about it, normal does not mean easy. 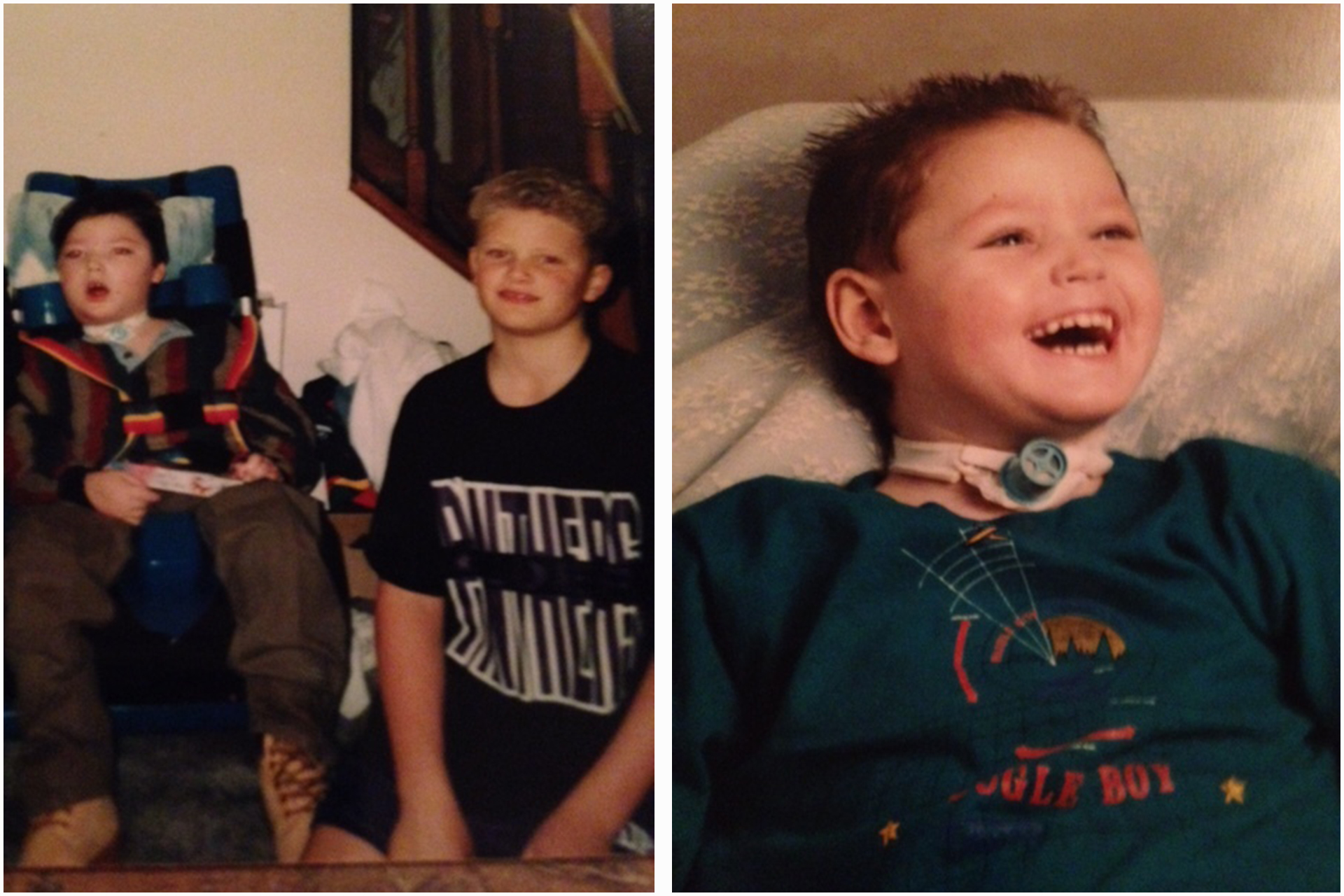 Early on, my parents would shuttle back and forth between their jobs, our house and the hospital almost every night. My mom would go to the hospital during the day while my dad was at work, and I’d be with a babysitter before school. That’s not at all an easy task, but my parents did it with a strength and unyielding love that continues to inspire me.

Evan was finally able to come home because the state provided live-in nurses. They were a blessing and took terrific care of my brother. Sometimes, though, it was tough having them around all the time. Imagine, as parents, trying to have a serious conversation while someone who isn’t family is within earshot.

It wasn’t long before Evan grew too big for us to take care of. Because he couldn’t get around on his own, we had to carry him up and down the stairs. When he was six, that was manageable. As he aged, though, it became more and more difficult, to the point where we just couldn’t do it. When Evan was nine years old, we had to move him to a nursing home. It was a really tough decision for our family.

Two years after that after that, he contracted pneumonia. For healthy kids, it’s a pretty easily treated disease. But for Evan, who had been battling health issues his entire life, it was lethal.

He passed away when he was 11 years old.

I loved playing football outside with my youngest brother, Tyler. We’d run all over, throwing the ball back and forth, pretending we were winning the Super Bowl for the Bengals. Sometimes, though, we wished Evan could be with us, that he could feel what it was like to tackle, or dive into the endzone, or throw for the game-winning touchdown.

There are kids out there who don’t have another sibling around to help them have a “normal” childhood. Likewise, there are parents whose only child is facing some kind of life-altering condition. And sometimes, when life gets difficult emotionally, financially or physically, it helps to have somebody there to say, “I know what you’re going through.” 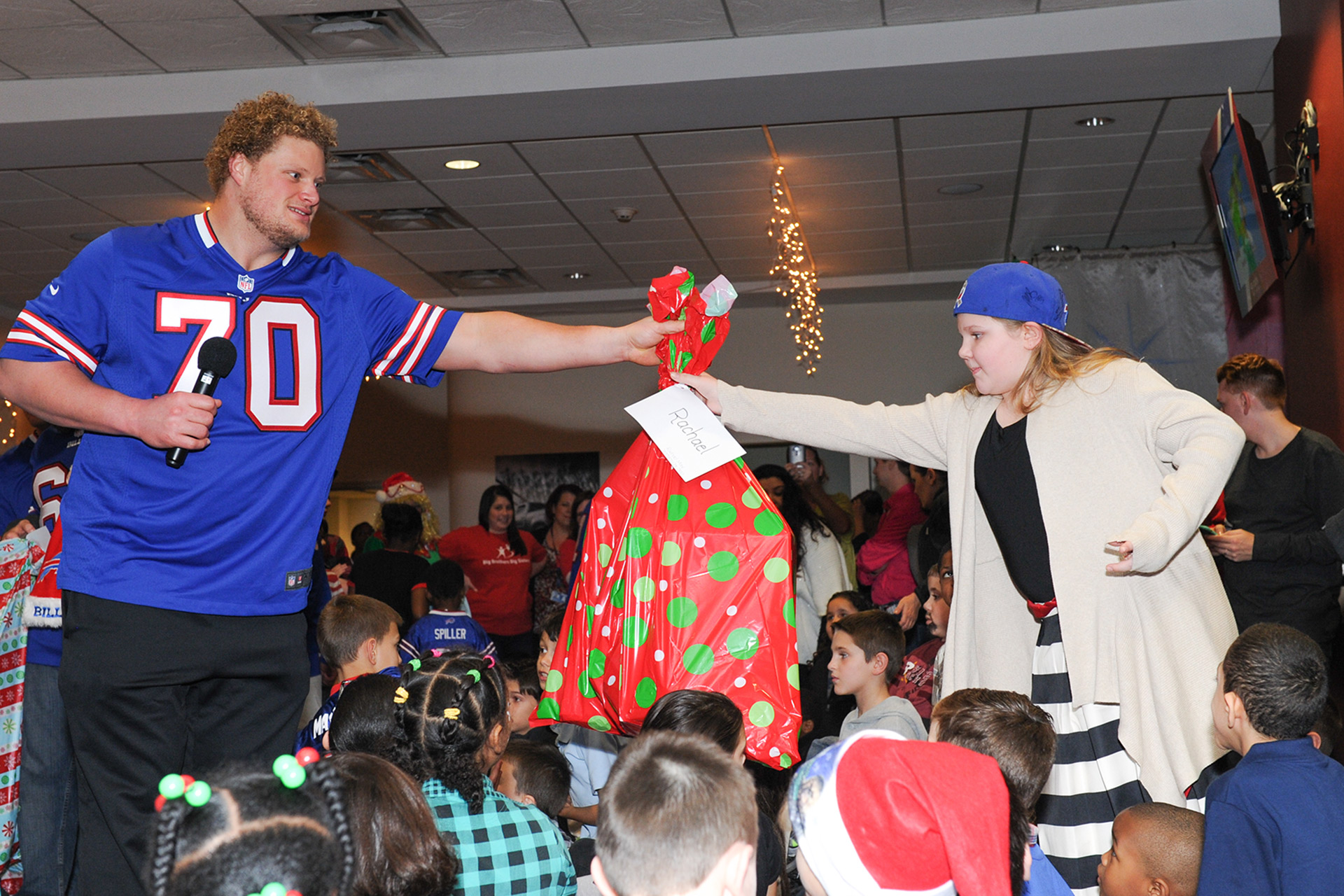 Maybe I can’t fully take their pain away, but I can at least help. I can take two 20-year-old young men whose lives were railroaded by cancer to a concert. I can treat parents who haven’t had a night to themselves for as long as they can remember to a steak dinner. I can take 30 kids Christmas shopping at Target, and, as a bonus, bear witness one of the most heartfelt sights of my life.

When my foundation hosted this event at Target last December, a bunch of Bills players, including quarterback Tyrod Taylor and Cordy Glenn, our big left tackle, showed up to help.

At first, the players were all just congregating amongst themselves. But suddenly, I looked over and noticed that Cordy was gone.

Cordy’s six-foot-six and 345 pounds. He’s not exactly easy to miss.

I walked around the store and finally I found him. There, amidst the Maybelline and the L’Oreal products, and the countless shades of pinks and reds and blacks, was Cordy. He was down one knee helping a 12-year-old-girl named Stella pick out some makeup. The smile on her face that it could have illuminated the entire store.

I’m a normal guy who plays a game for a living. Some guys take it way too seriously. I get it. Football’s a huge business, there’s a lot of stress and it’s played by elite athletes (well, maybe not the O-linemen), but when it comes down to it, it’s just a game.

Even today, when I get down about something on or off the field, I think of Evan’s smile, and how he kept it even with everything he went through. It makes me feel silly for even worrying about whatever trivial problems I might be facing. It reminds me that I should be thankful. And it makes me want to help put that same smile on the faces of others who are battling obstacles similar to those faced by Evan and my family — because I know how hard it can be to find that smile.

Everything I do in the community with the Eric Wood Foundation, I do with Evan — and his smile — in my mind and in my heart. He’s my inspiration and my motivation. This is his legacy.

To learn more about the Eric Wood Foundation, visit www.ericwoodfoundation.org