From Where I See It: Wrigley Field

Today, it’s easier than ever to watch a sporting event on TV. Despite that, the allure of being at a stadium to watch the action unfold live is as strong as ever. What is it that keeps us coming back? Is it the atmosphere? Is it the people? Is it the food? Maybe it’s all of those things, and a few more that can’t quite be put into words. The Players’ Tribune wanted to get a closer look at the people surrounding sporting events who nobody comes to watch, but who play a vital role in creating an unforgettable game-day experience.

Hey Chicago What do you say? 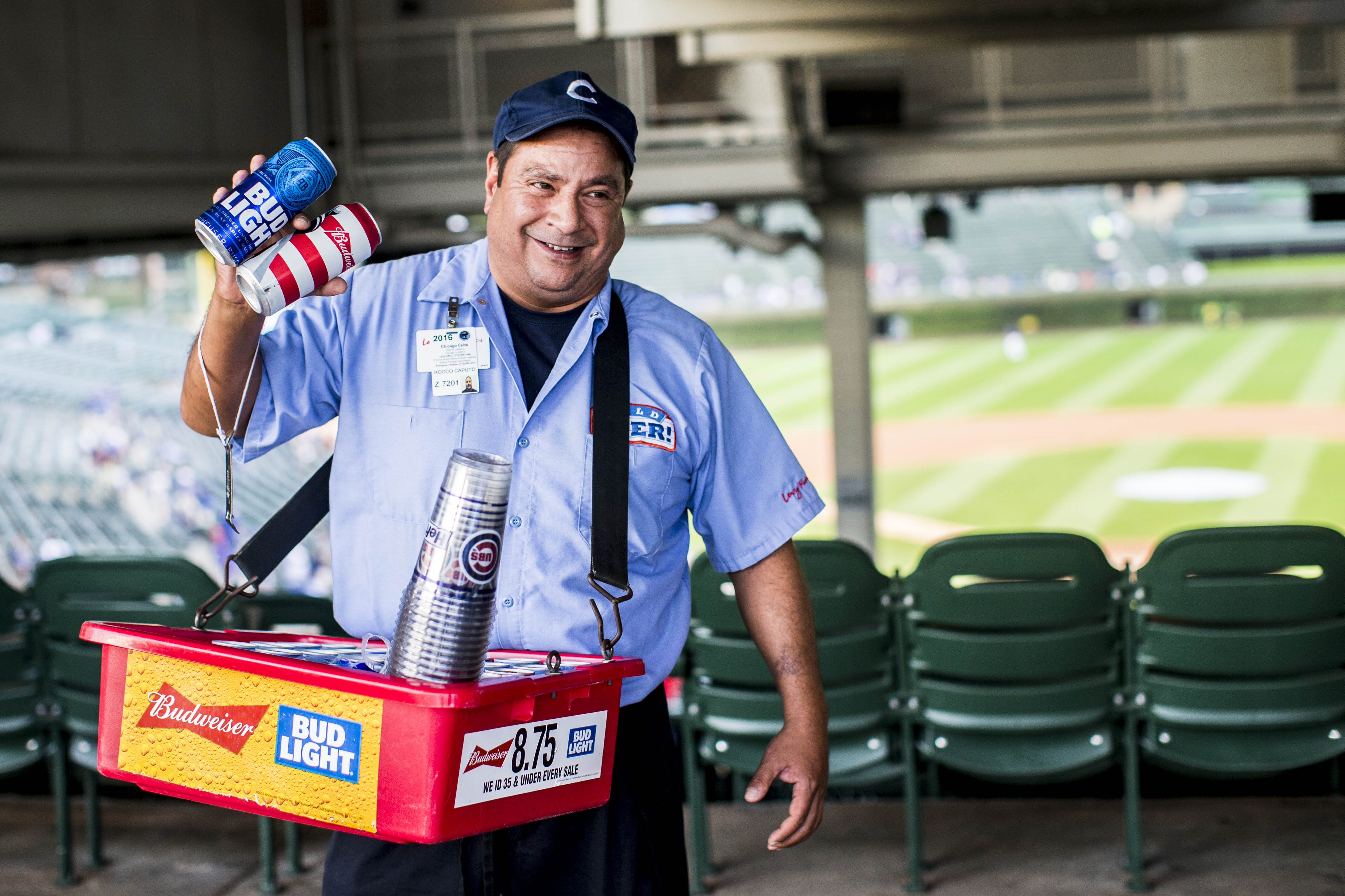 “Man, I still remember my first day. I was so nervous. I was only 16. We got our assignments through our union stewards, and I handed my union card to the steward, who happened to know my father. My dad had also been a union steward, and had also worked at Wrigley for many years. The guy looked at me and said I could sell whatever I wanted. I chose peanuts, and I sold three cases that day. Made 30 bucks! I just felt so excited. I eventually moved on to selling Pepsi, then hot dogs and I finally moved up to beer. Been doing it ever since.”

I just want to see how my customers react. I’ll cheer with them and high-five with them.

Rocco explains his connection to the fans (0:23) 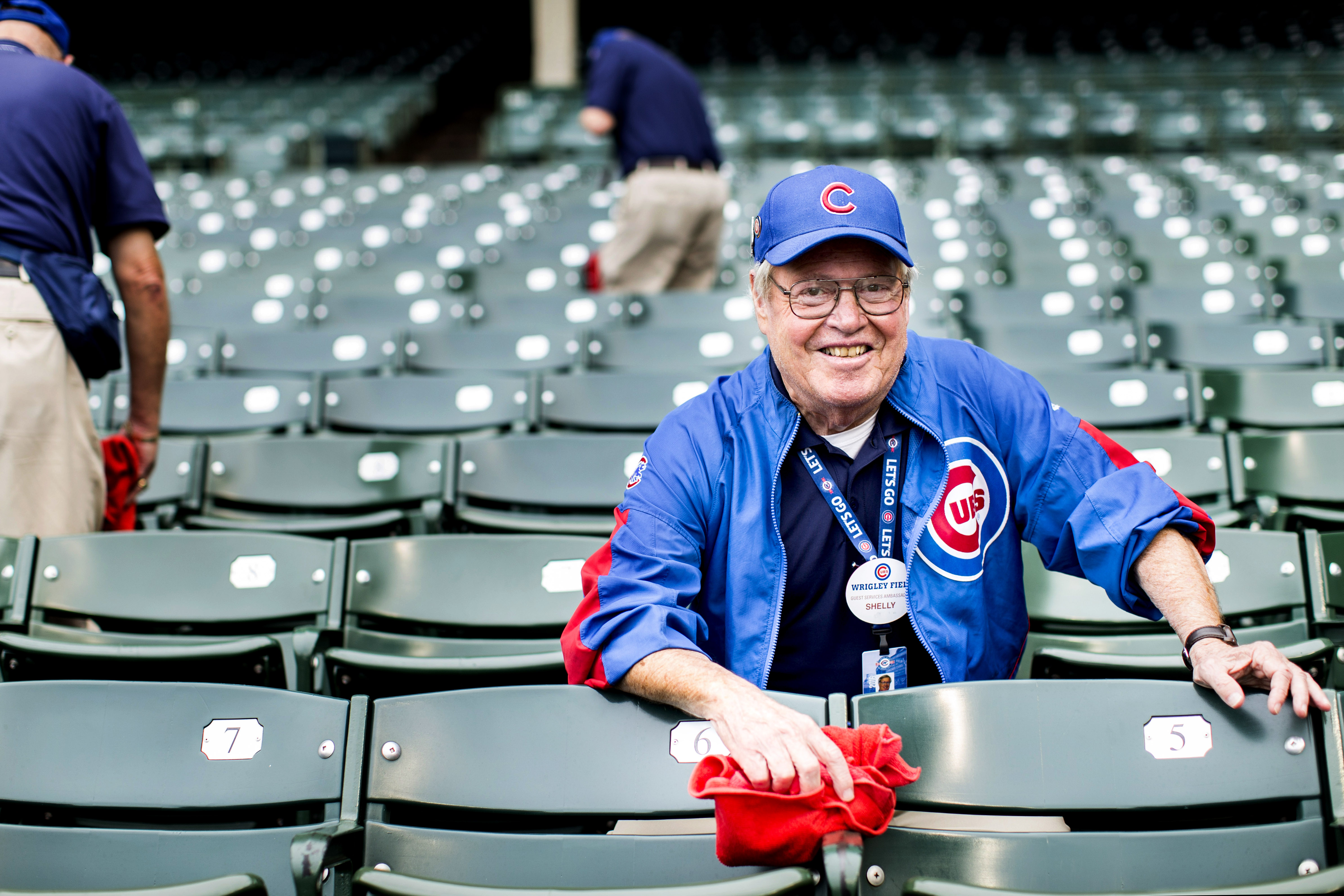 “I was born and raised in Chicago. I worked here while I was a senior in high school, then as a vendor while I was in college. After I retired later in life, my children said I should come back to work at Wrigley once again. Honestly, not too much has changed over the years. Granted there have been the renovations and more seats added to the bleachers, but… it’s still Wrigley.”

We see people from all over the world here.

Shelly remarks on the international fame of Wrigley Field (0:22) 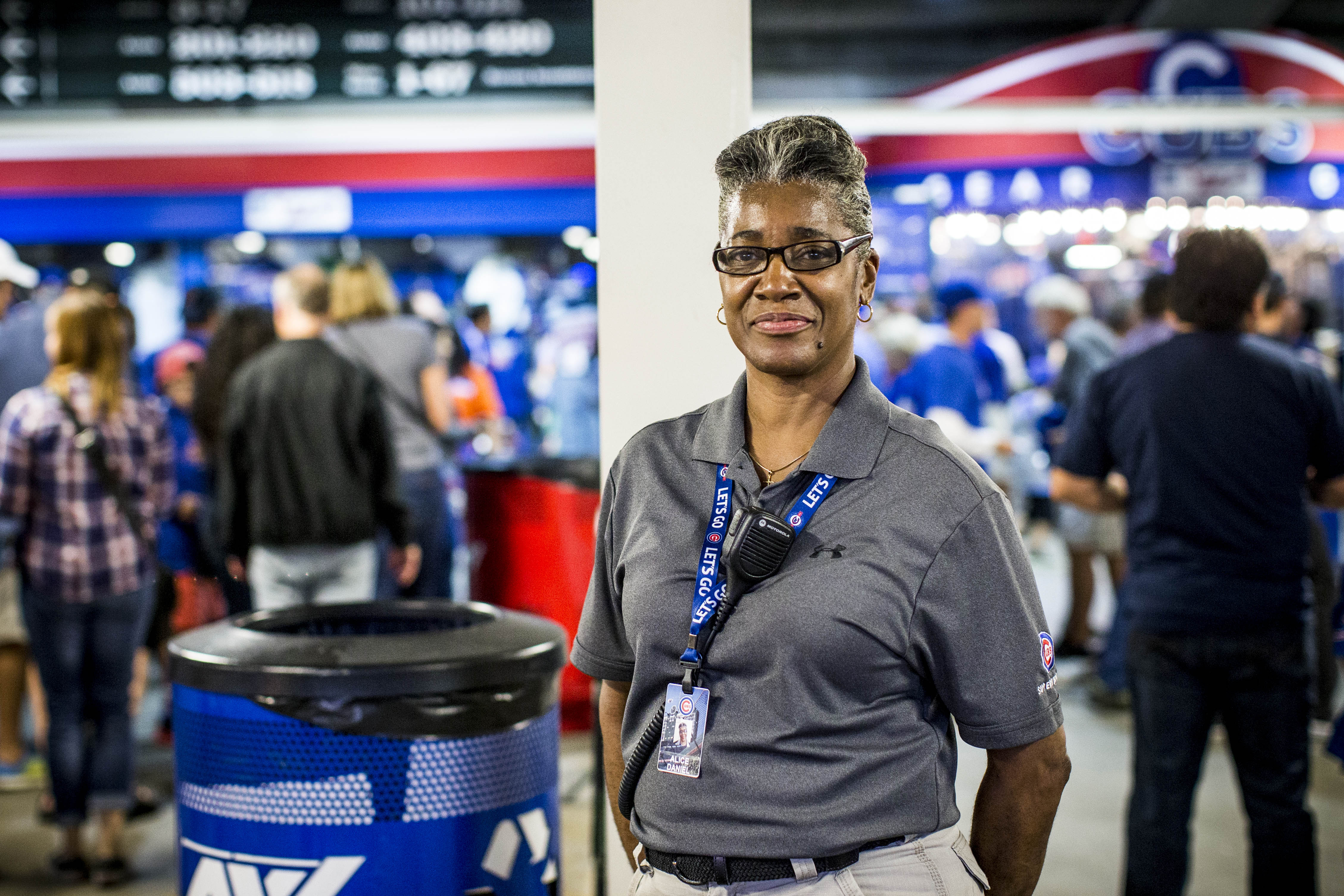 “My pet peeve is paper anywhere it’s not supposed to be. Can’t have it. Once the crowd clears out after a game, we can clean the whole stadium in about 45 minutes. We’re pretty quick at it because we’re also constantly cleaning throughout the game. My crew jumps right in whenever anything needs taking care of. We take a lot of pride in keeping this place beautiful.” 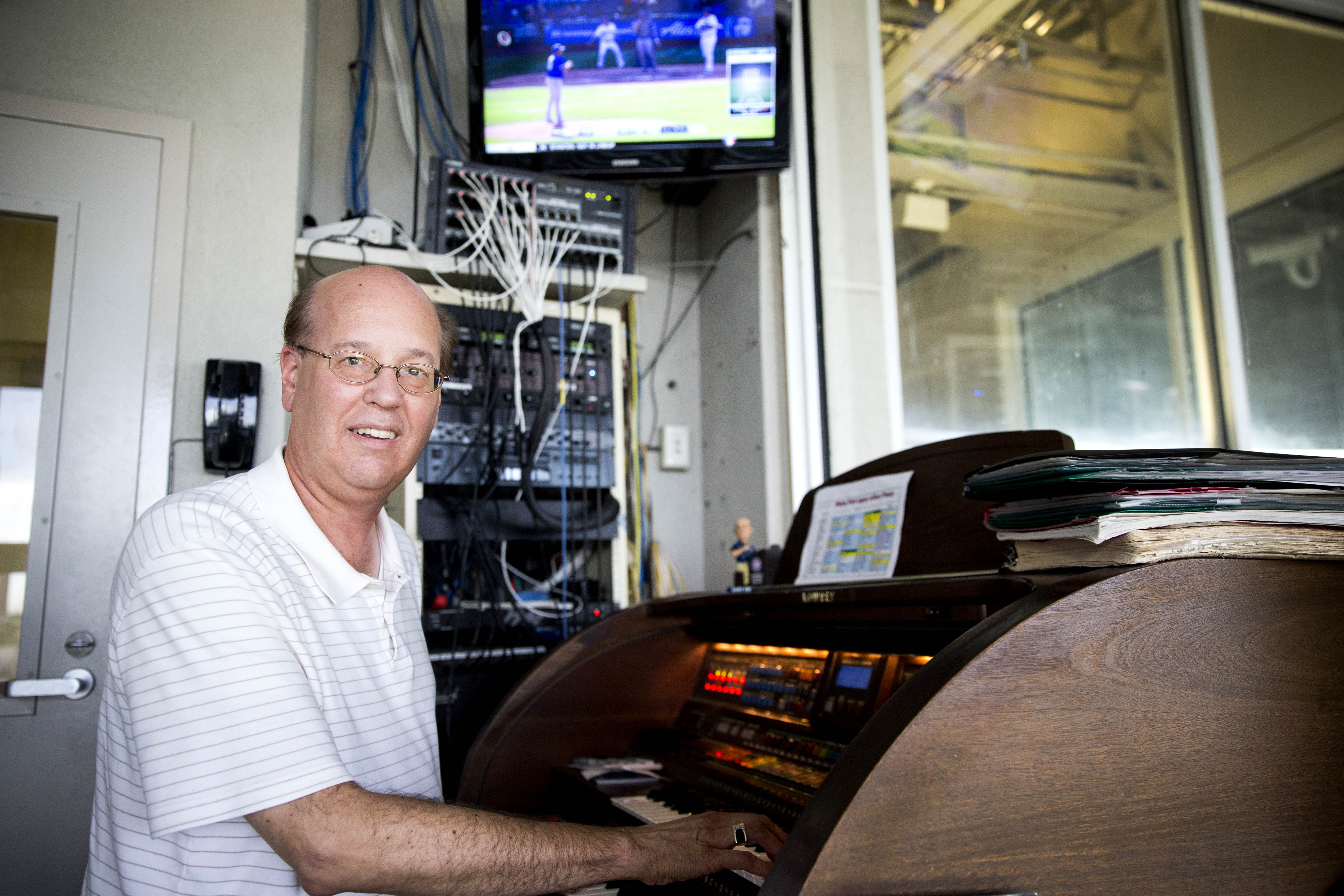 “I’ve been an organist with the Cubs since 1987. I have a little calendar that helps me keep track of every game I’ve worked. Baseball has always been in my blood — not in terms of playing, I could never hit a fastball — but more so because of the atmosphere. I wanted to be able to contribute to that. I enjoy playing throughout the game, but I’ve always loved the seventh-inning stretch in particular. We’ve had quite a few celebrity conductors, and that’s always interesting. You never know who’s going to show up.

The first year we used celebrities was in 1998 after Harry Caray passed away. So Dutchie Caray, Harry’s wife, did it the first time. Then Vin Scully did it, and he’s an Irish tenor. Man, he just nailed it. He was tremendous. But the funniest one was when we were playing the Pirates on a Sunday, and Mike Ditka was scheduled to sing. He was a little late because he was on the golf course, but he made it up to the booth just in time. And he performed ‘Take Me Out to the Ball Game’ at a polka tempo. I’ve never seen anything like it. I didn’t even catch up to him until halfway through.”

Pressy plays take me out to the ballgame (0:33) 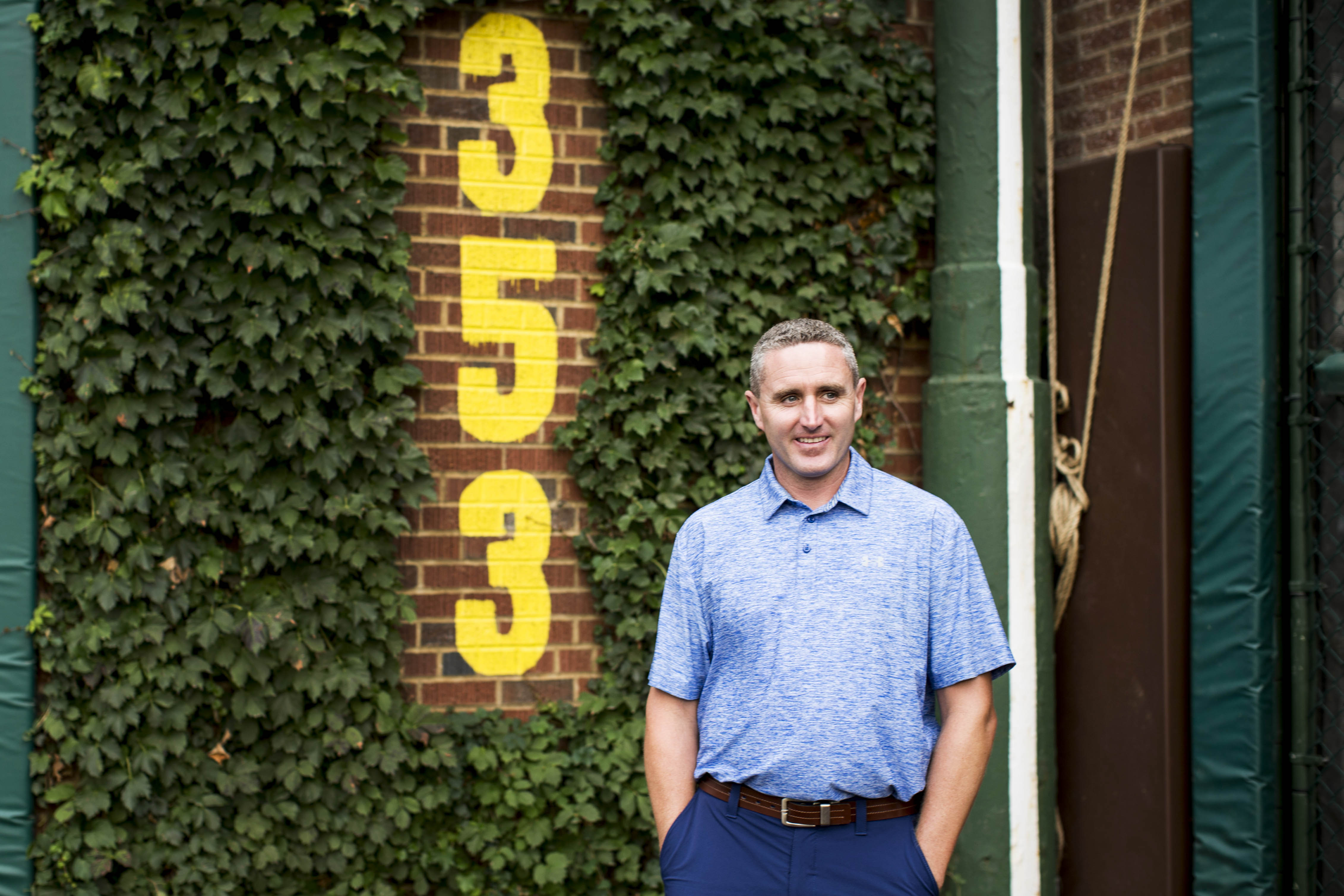 “I’ve learned quite a bit about ivy upkeep. The ivy is very temperamental. The ideal temperature for the ivy’s health is 70°. We have sprinkler heads that will water the ivy during the summer to cool it down. As long as it doesn’t get too cold, I predict that the Cubs would need to play into mid-or late October for the ivy to turn red. I think Chicago would like to see that.” 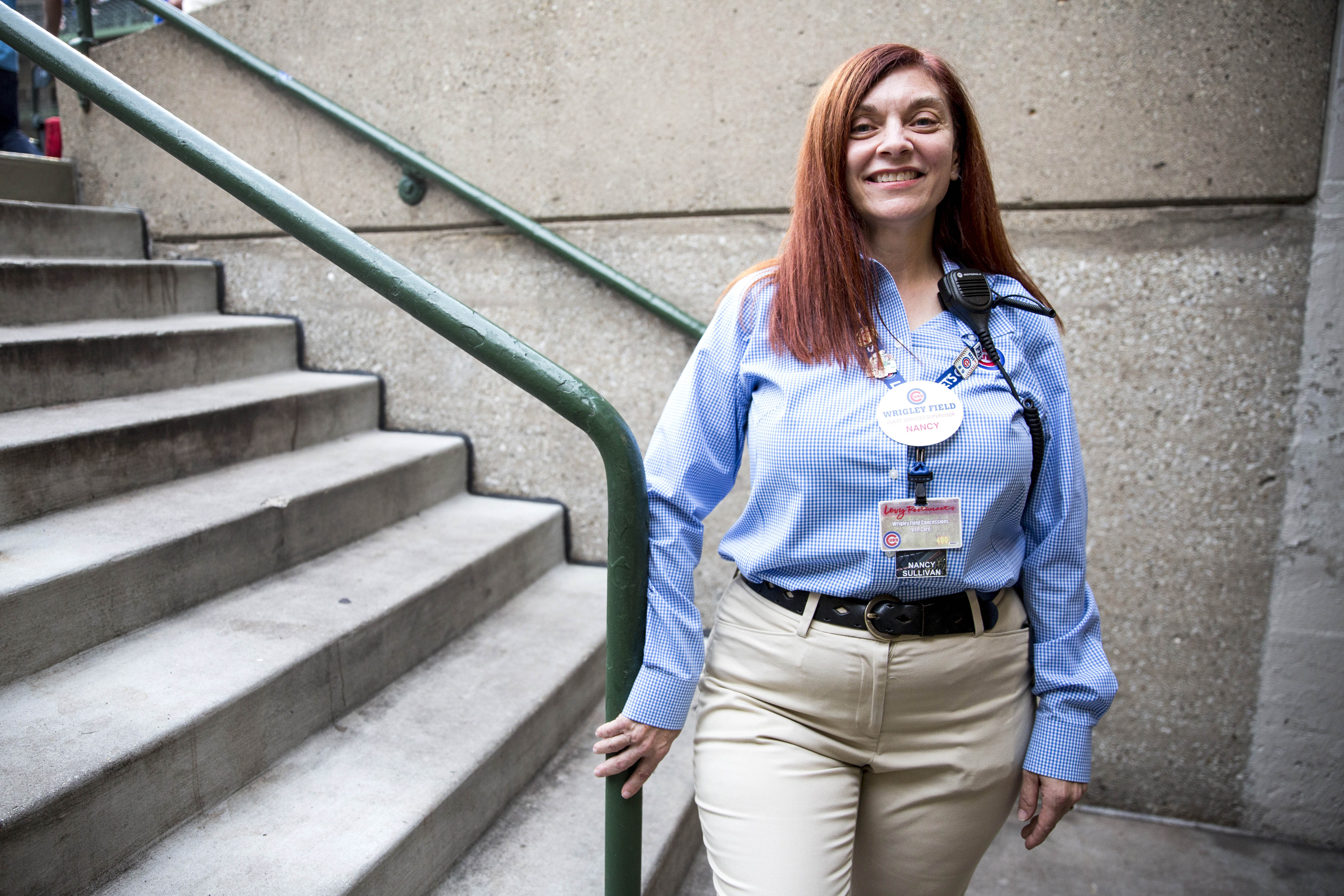 “I’m a high school teacher on the South Side of Chicago, actually not too far from another ballpark that will not be named. It’s a high-poverty school, so we have students who are very high-need. It’s a constant challenge, but it’s also very rewarding. Working at Wrigley by comparison is sort of a stress reliever for me. I think my kids turn to the Cubs for similar reasons. As the team has improved, I’ve seen more and more of my kids showing up to class in Cubs gear. Some of my students even work here as well. I’ve had students who have graduated from college and then continued to work here. One of them even became a supervisor like me, so he went from being my student to my colleague.” 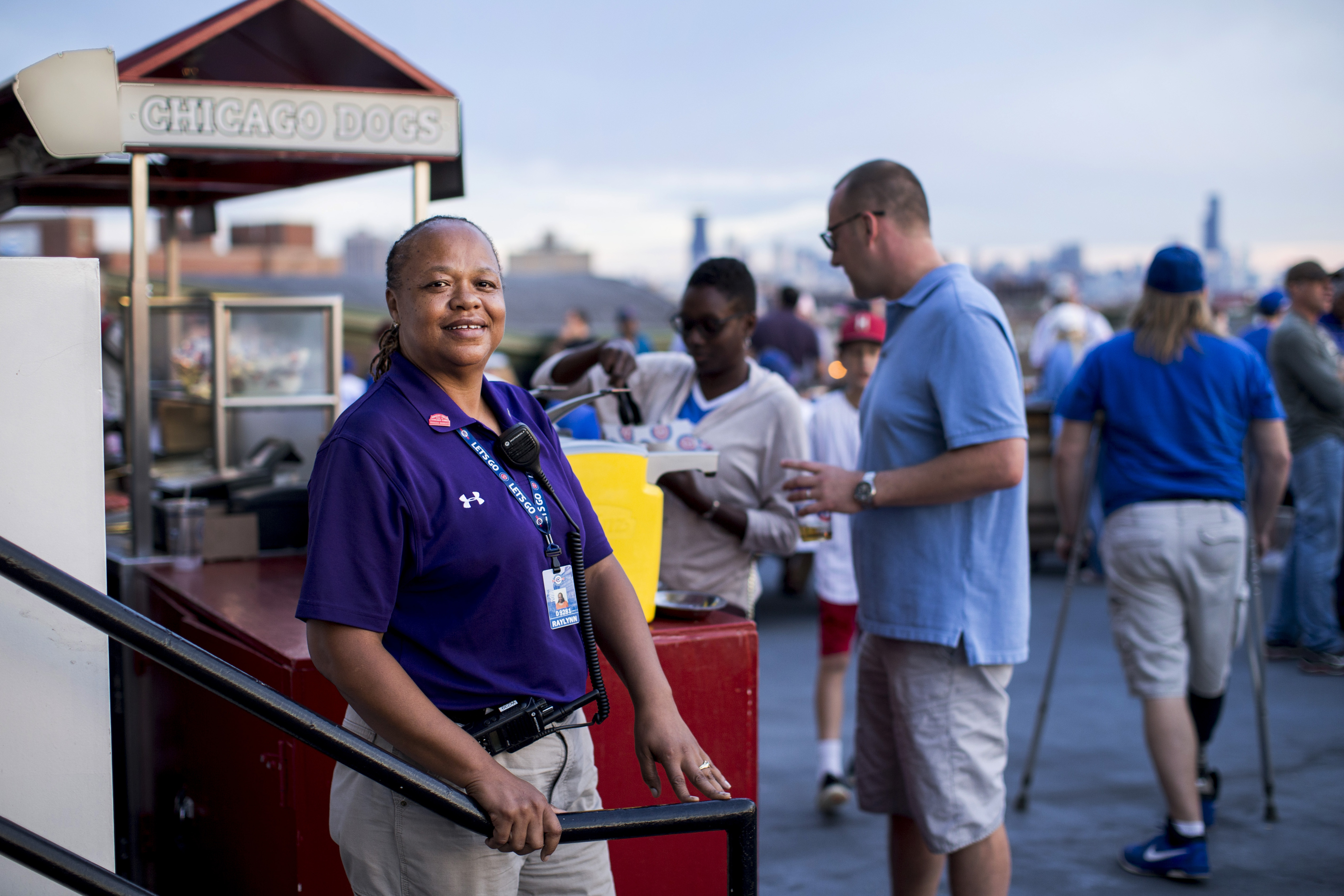 “When I wake up in the morning on a game day, I immediately feel happy. My grandfather used to make us sit around the TV and watch the Cubs growing up, and that’s how it really got into my blood. Now I’ve been working here for 18 years and the reason I still get excited about coming to the ballpark is because I love being around the people here. This is my home away from home. This is my family.”

Ernie Banks always took the time to say “hi”. I felt like these were my co-workers not just superstars.

Raylynn explains the excitement and familial atmosphere working at Wrigley. (0:41) 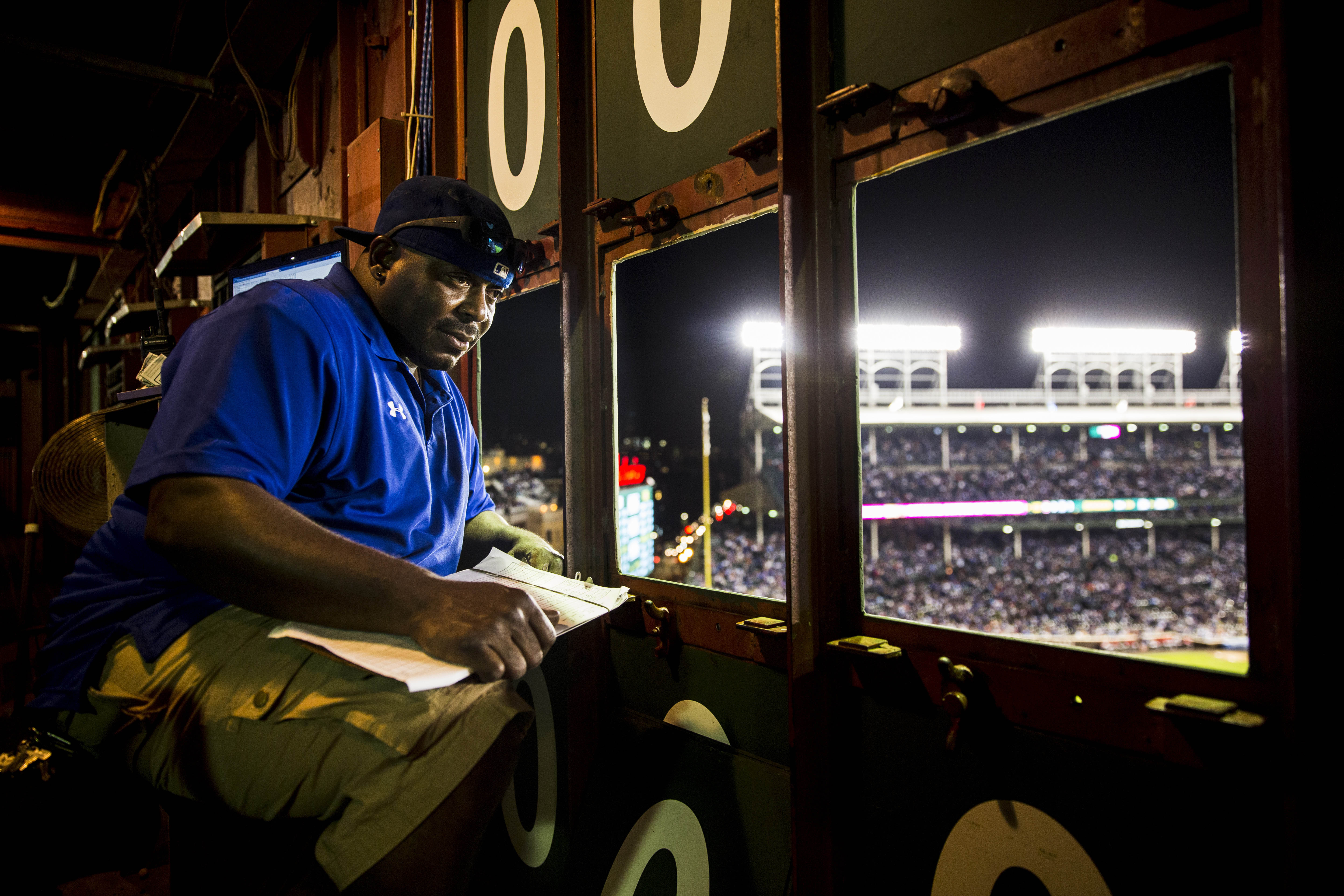 “I worked for a union many years ago and they said they had a spot open at Wrigley Field and asked if I wanted it. I didn’t know what I was getting into, but I decided to give it a shot. When I got here they told me I’d be working for the grounds crew. I mean, I had no idea what the grounds crew was, but I found my way up here. I have to keep track of the games going on around the league, so I get a feel for what’s happening here just by feeling the energy of the crowd. When there’s a hit, everybody roars. When it’s a fly out, you’ll hear everyone’s voices go up with the ball, then suddenly drop when it’s caught. It gets real hot up here during the summer, you have to wear gloves to touch anything. But man, there’s not a much better seat in the house.”

With the crowd noise and these targets buzzing, it gets nuts in here.

Daryl explains the challenges of working with his team to keep accurate scores. (0:48) 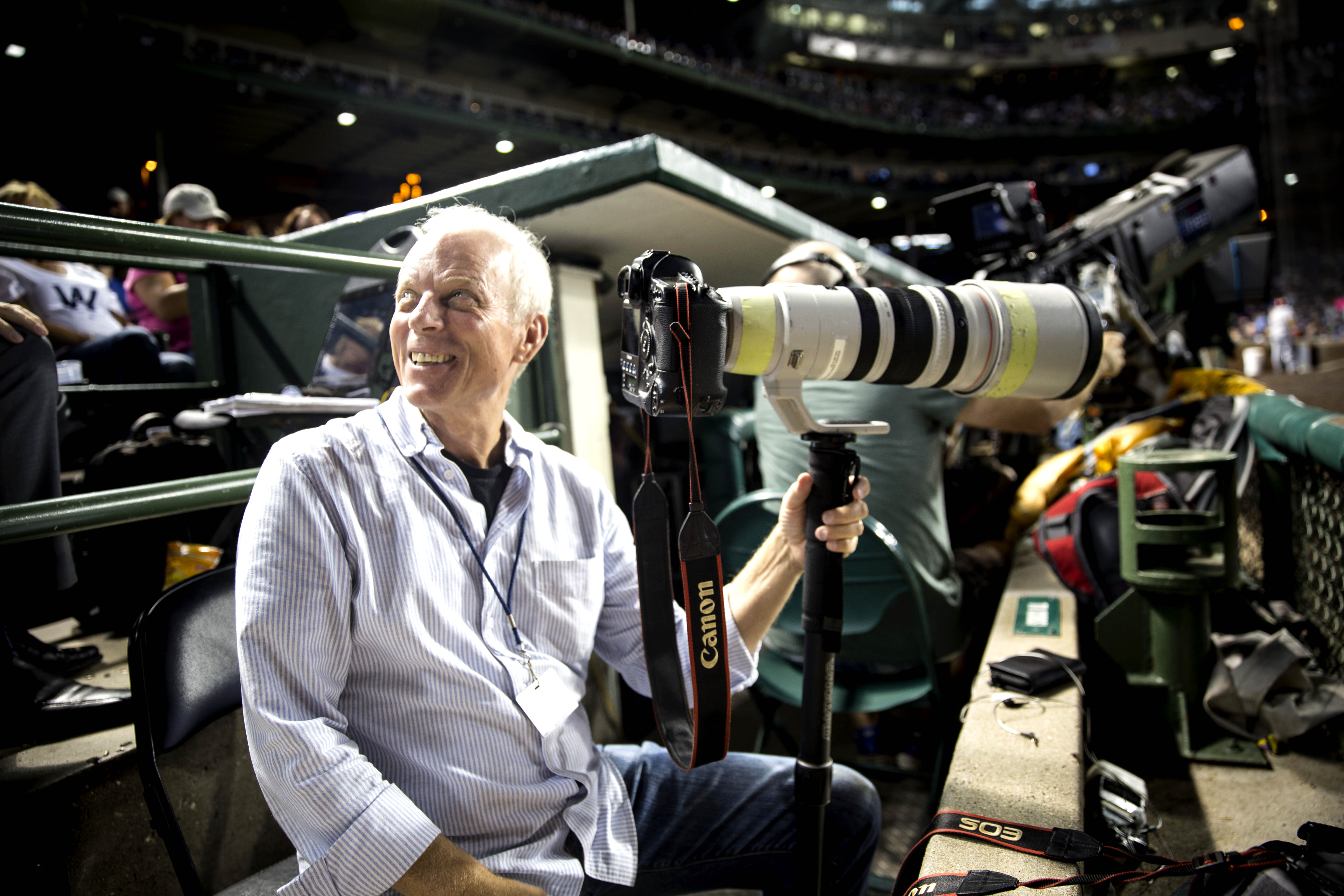 “I met my wife at Wrigley. Ironically, she’s not a baseball fan. She was there with her family. A friend of mine had asked if I could get his grandmother down on the field to take a picture for her 80th birthday. Her grandmother was from La Crosse, Wisconsin, but grew up watching the Cubs on WGN and listening to them on the radio. I said O.K., that I would try to see if we could get her down on the field, but that I was working so I didn’t want to deal with the family or meet anybody. The grandmother came down. She was really charming. She even got to meet Harry Caray and he gave her a kiss, which was really special. I looked up in the stands as I was talking to my friend and saw this really pretty girl. I said ‘Wow, she’s really pretty.’ He said ‘Well, that’s this woman’s granddaughter.’ So I said, ‘Well, maybe I should meet the family.’ So I met her and we hit it off. A couple of years later we got engaged and we’ve now been married 20 years.” 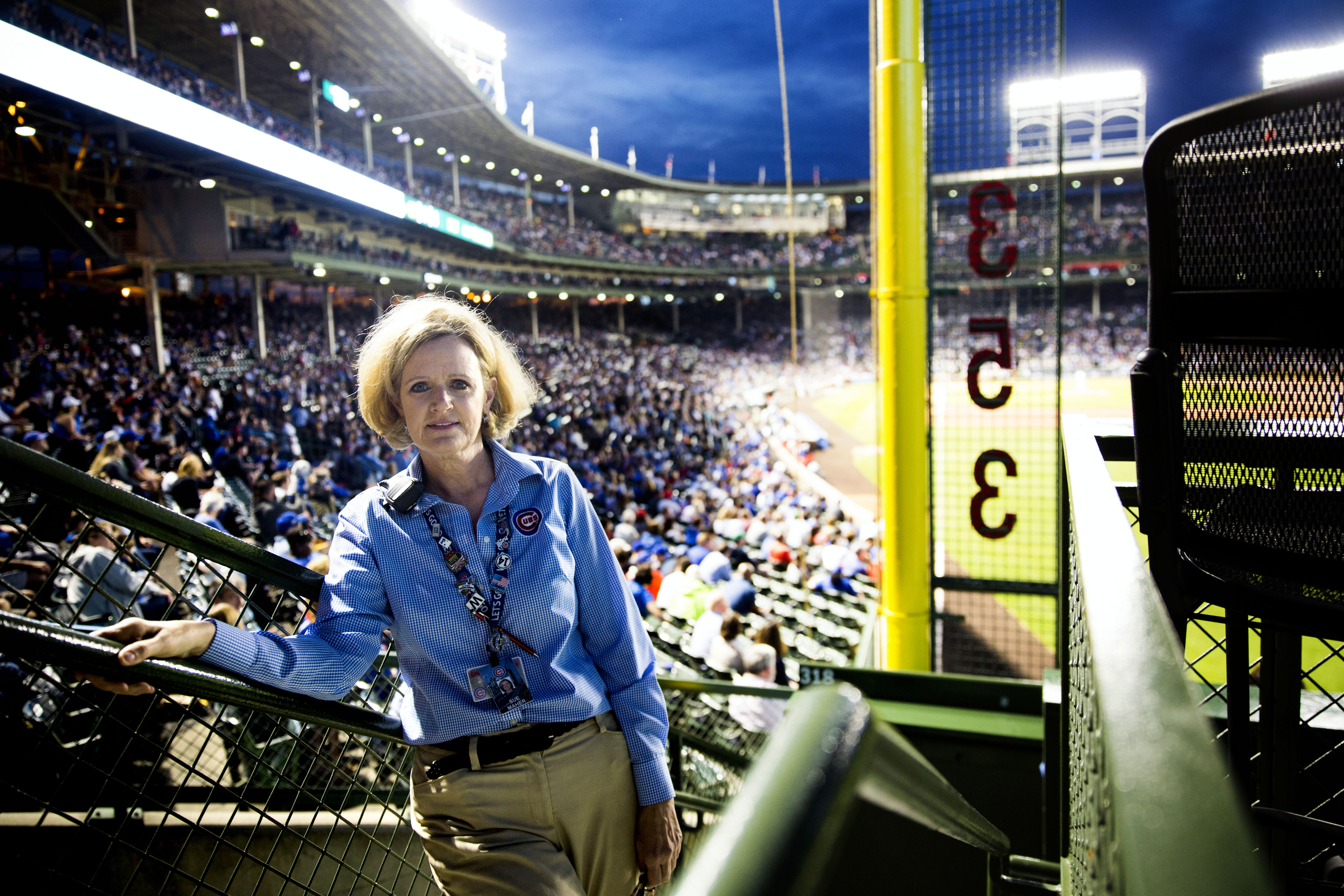 “I used to work a security shift from 6 AM to noon on Saturdays. I would be the only person inside the ballpark. During my first round, I would walk up the stairs with my coffee and watch the sun rise over the Chicago skyline. I’d get to walk around as the sun filled the stadium, and it was always this amazing experience.

All these years later, I still have moments when I’ll be wandering the stadium and a certain view catches my eye and I just think Wow, this place is so beautiful.” 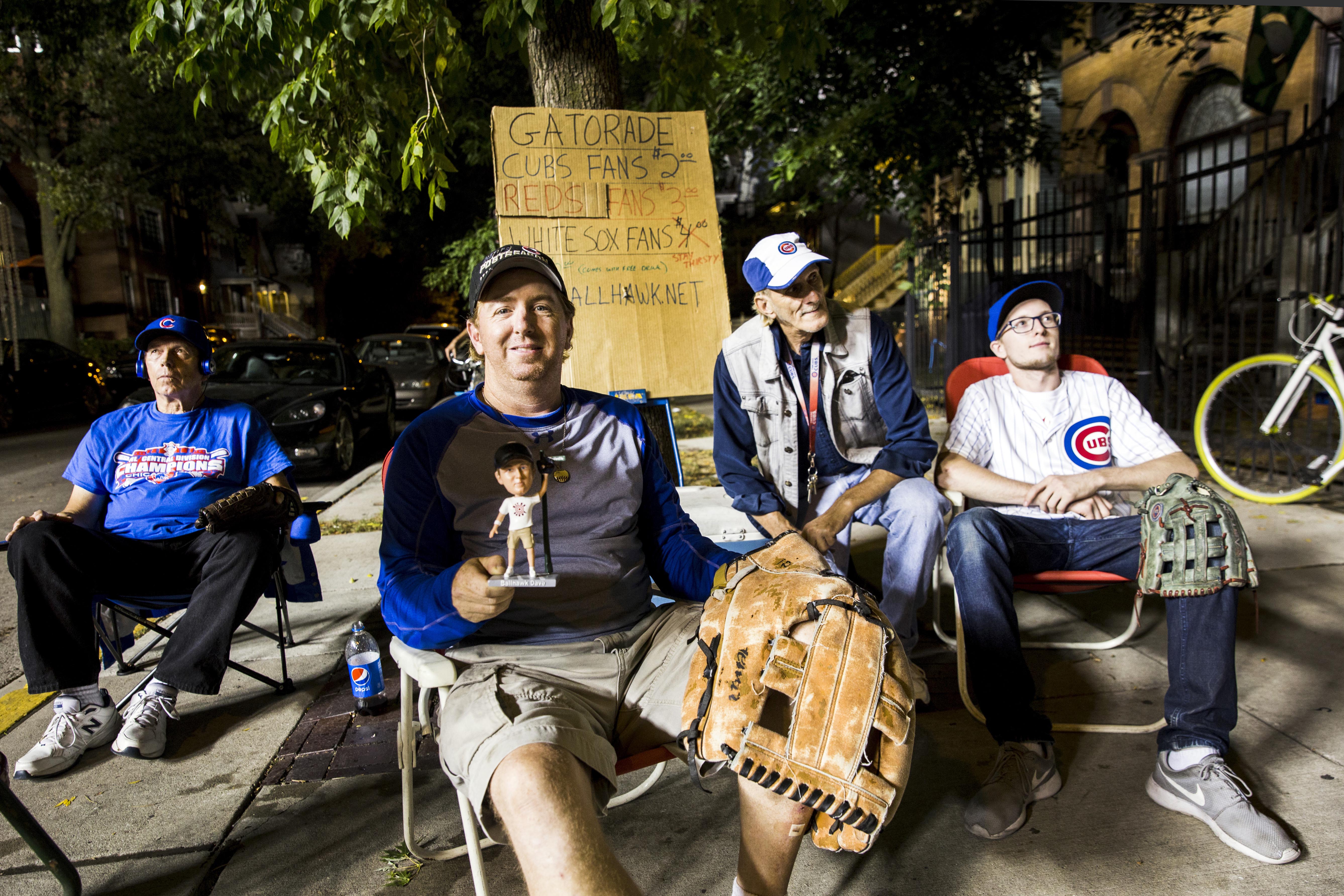 “I’ve been sitting out here for about 33 years, since I was four. Big Glove is about 20 years old. I special ordered him after I dropped a few home run balls. My friends would say, ‘Hey Dave, you need a bigger glove!’ So I got a bigger glove, and it didn’t help. One ball went through the holes in the webbing and hit me right in the chest.

I’ve always thought it was more fun out here because the team is usually not that good. But nowadays I still wouldn’t go in because of all the good times we have out here.  Baseballs fly out — frequently — and the conversation is always good.”

We’re regulars. The beer and food is cheaper out here.

Dave explains the tradition behind his regular attendance outside of Wrigley Field for Cubs games. (0:28) 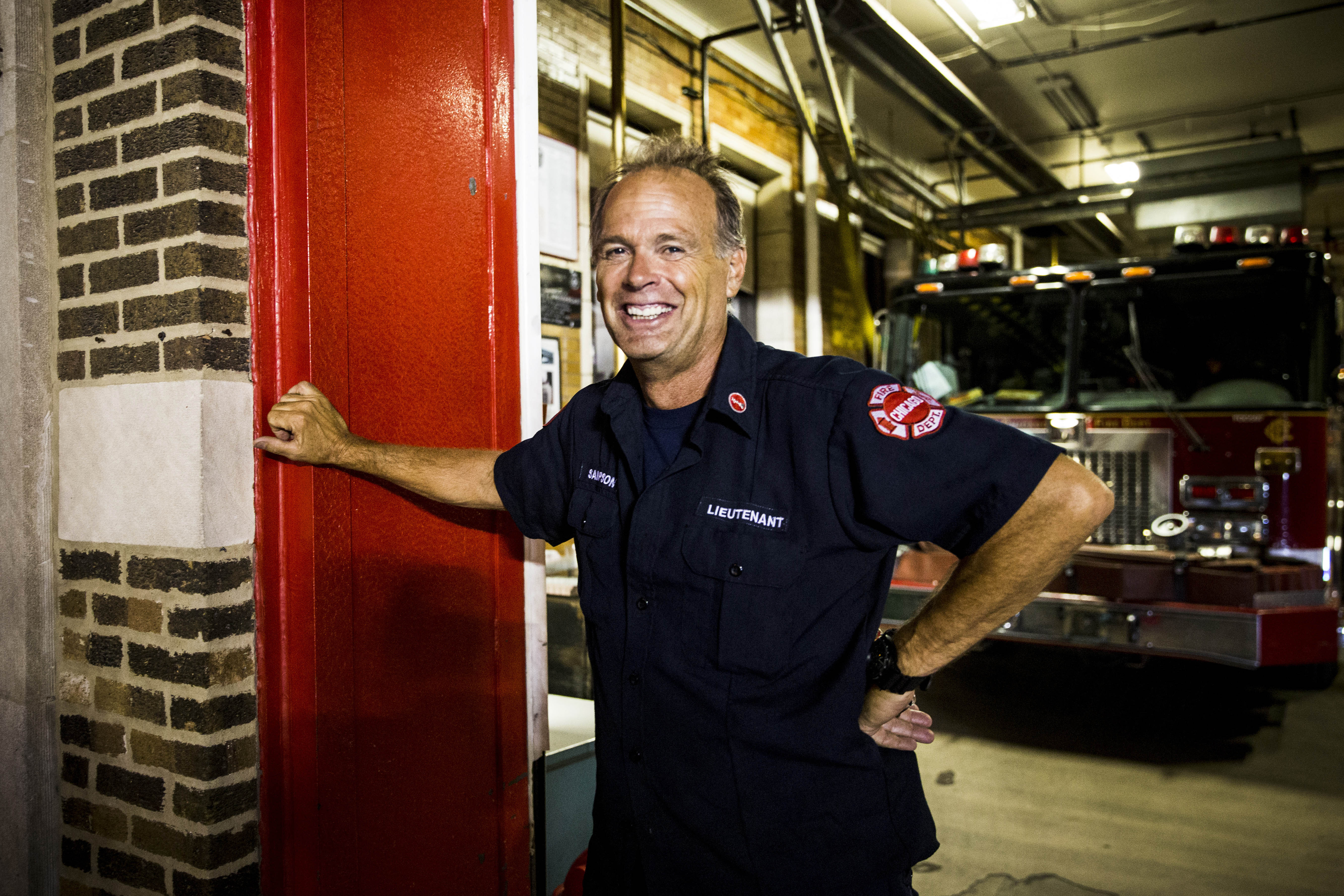 “I’ve been at this fire station for 36 years now. My whole family has worked here. I used to watch the team play in black and white. I’ve thought about what would happen if we won a World Series, and I think it might cause this franchise to do some soul searching. Because then the mystique is over. The “lovable losers” are gone. What’s next? I really hope not too much changes because my family has been watching the team for so long. We love the Hawks, we love the Bulls, we love the Bears and we love the Cubs. But nobody loves the Sox. Man, I absolutely despise the Sox.” 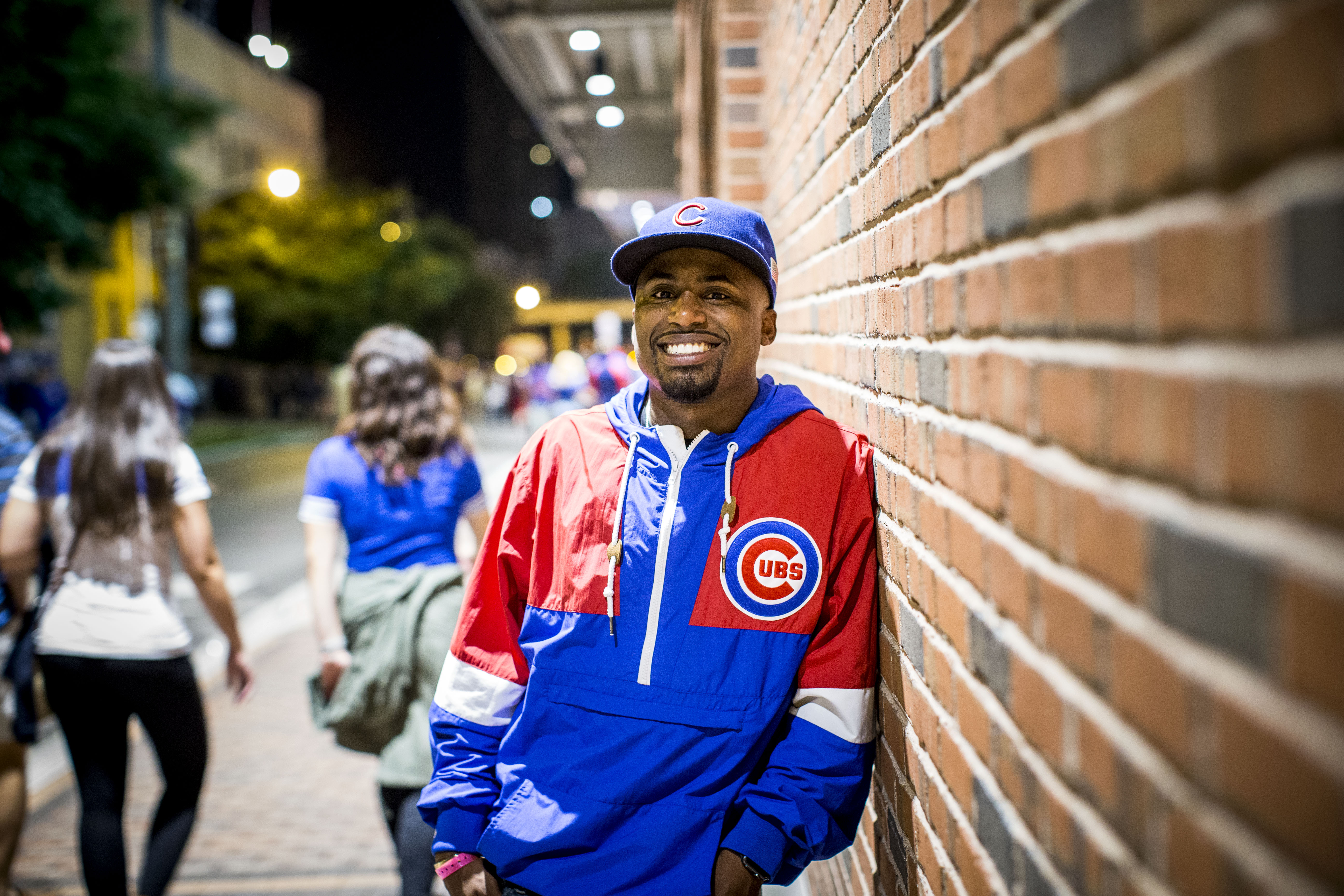 “This is my 29th Cubs game this year. Basically all my money goes toward going to Cubs games. My mom was born in the Dominican Republic. She was a big Sammy Sosa fan, so he was like a superhero to me when I was growing up. My passion for the team has only grown since then. Last year I was nervous heading into October, but this year I’m excited. I don’t believe in curses. With the team that we have now and the management, I think if you look at it from an objective perspective, we have a very good shot at this thing. How crazy is that?”

My Grandmother’s favorite player was Ernie Banks. She never saw a world series.

Michael expresses hope for the Cubs this season. (0:27)

The Players' Tribune
The Voice of the Game