Everyone meets at the barbershop.

Down South, that’s just how it is. Every Saturday my dad would take my brother and me along with him to our local barbershop, Cuttin’ Up, in Seneca, S.C., and we’d be there for hours.

The haircut never took that long, but the barbershop, well, that was a place we went to get away from everything, to talk about what was going on, to talk about problems. I’d climb into one of those big chairs and listen to the guys go back and forth while my cousin Chicken cut my hair. We call him Chicken because he’s just this skinny guy, but man, does he give a good haircut.

And after my cut, the younger boys in the shop would just play video games. No one ever left once their cut was done. And nobody paid much mind to what we were doing, just as long as we were doing something and staying out of trouble. Like I said, we were there for hours, so most of the time we’d be playing Crash Bandicoot, NBA Live or Madden.

No one thought to bring homework or a book to read. There were other places to get work and reading done, like the classroom.

The problem for me, though, was that I didn’t get much work done at school either.

And fun for me was flinging little paper footballs at my classmates. You know the ones I’m talking about: You fold up the paper as tight as you can into a triangle. Basically, I would sling shot it with a rubber band. I had that down pat. See, the trick was to get one of those superthick rubber bands to make those things really fly. The paper footballs would just shoot across the room and smack some kid in the back of the head. And I had to be guy who got everyone. I’d fling piece of paper and it’d hit one of my classmates and then everyone would laugh.

“Who did it?” the teacher would ask.

I eventually got a little too good at folding the paper up tightly and the footballs I made started to get pretty hard. Any kid I hit with one would be really hurting, really feeling it.

But my teachers and my parents? Not feeling it.

So one day when I was in the third grade I came home after school— after having gotten in trouble for acting out again — and before I could go upstairs and play video games like usual, my dad stopped me.

“You like being active, you like moving around? Well, we’re gonna try and channel your energy into something else. We’re gonna try football.”

My dad was actually the coach of one of the local Pop Warner teams, but he never wanted to force me into football, and I had never been all that interested in playing anyway. But once things got pretty bad in school, he didn’t care whether I’d like it or not. He grabbed another set of pads and a helmet and we drove off to practice. 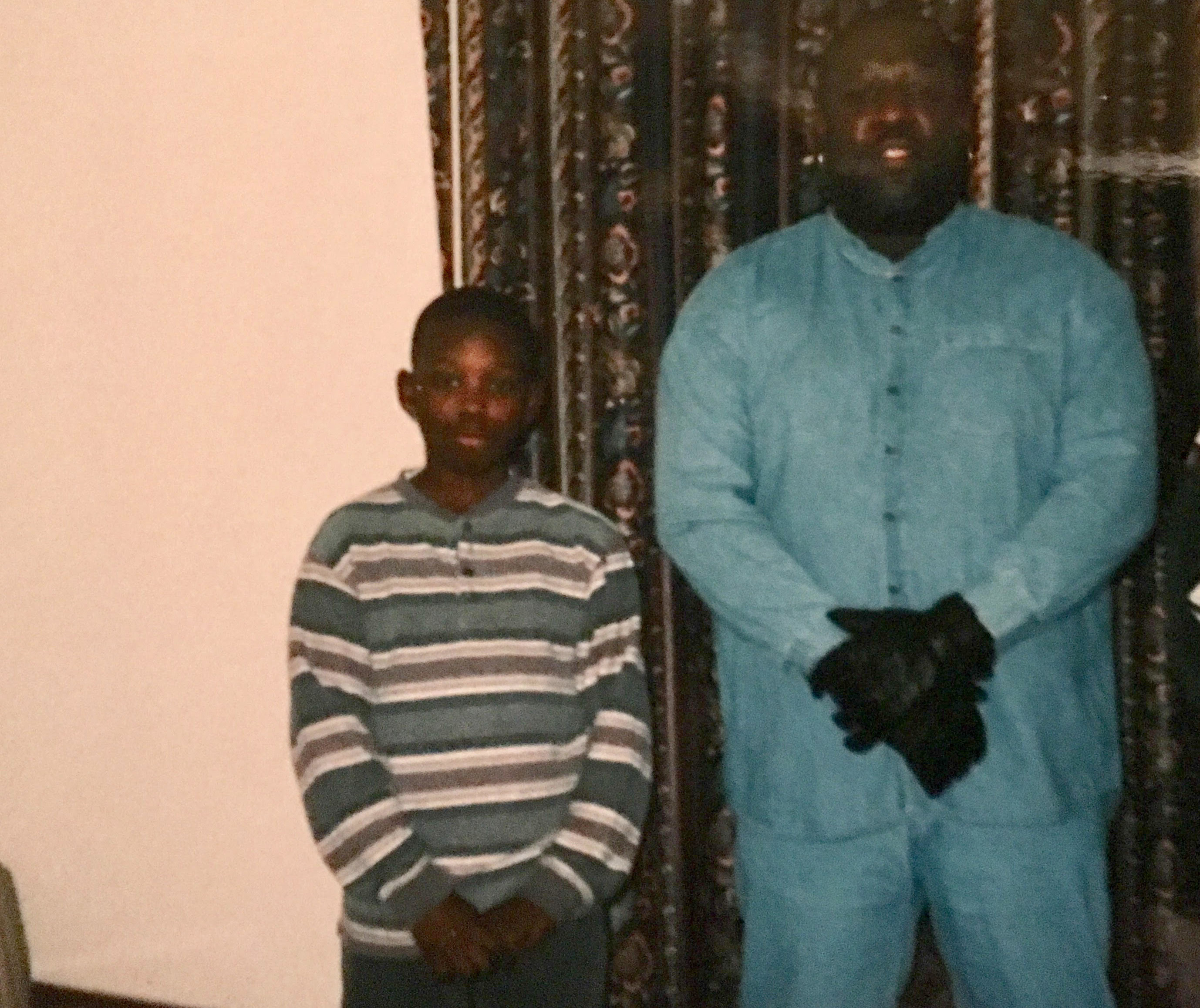 It was hot. It was humid. And I just wanted to play video games. But all my friends from school were there. And it turned out that I was pretty good.

I wasn’t the fastest on the team, but I caught on and learned quickly. My coaches only had to teach me a technique once.

“Run this route, go out five yards, catch the ball and score.”

So that’s what I  did. And everybody was like, “Yooooo, how you getting this down so fast?!”

“All you gotta do is listen.”

Yep, that’s right. Advice on listening from the kid who never listened in class. Football was a way for me to get the attention and admiration I wanted from my classmates — that I had been acting out for in the classroom. Suddenly, all I wanted to do was to be on the football field.

But my behavior still wasn’t getting better in the classroom during those first couple of years of football. My dad had been warning me about my report cards — not so much about my grades, which weren’t awful (mostly B’s and C’s),  but about the comments the teachers would leave.

Dad kept telling me how things were only going to get harder once I got to middle school, and that if I didn’t behave, he would ground me.

“I’m gonna let you know one more time,” he said. “Sometimes you can’t control what you learn and how good of a grade you make. But you can control your mouth. So that’s gonna stop.”

I kind of just gave him the “yeah, yeah, sure, sure” treatment. What’s he gonna do? Take away my video games? 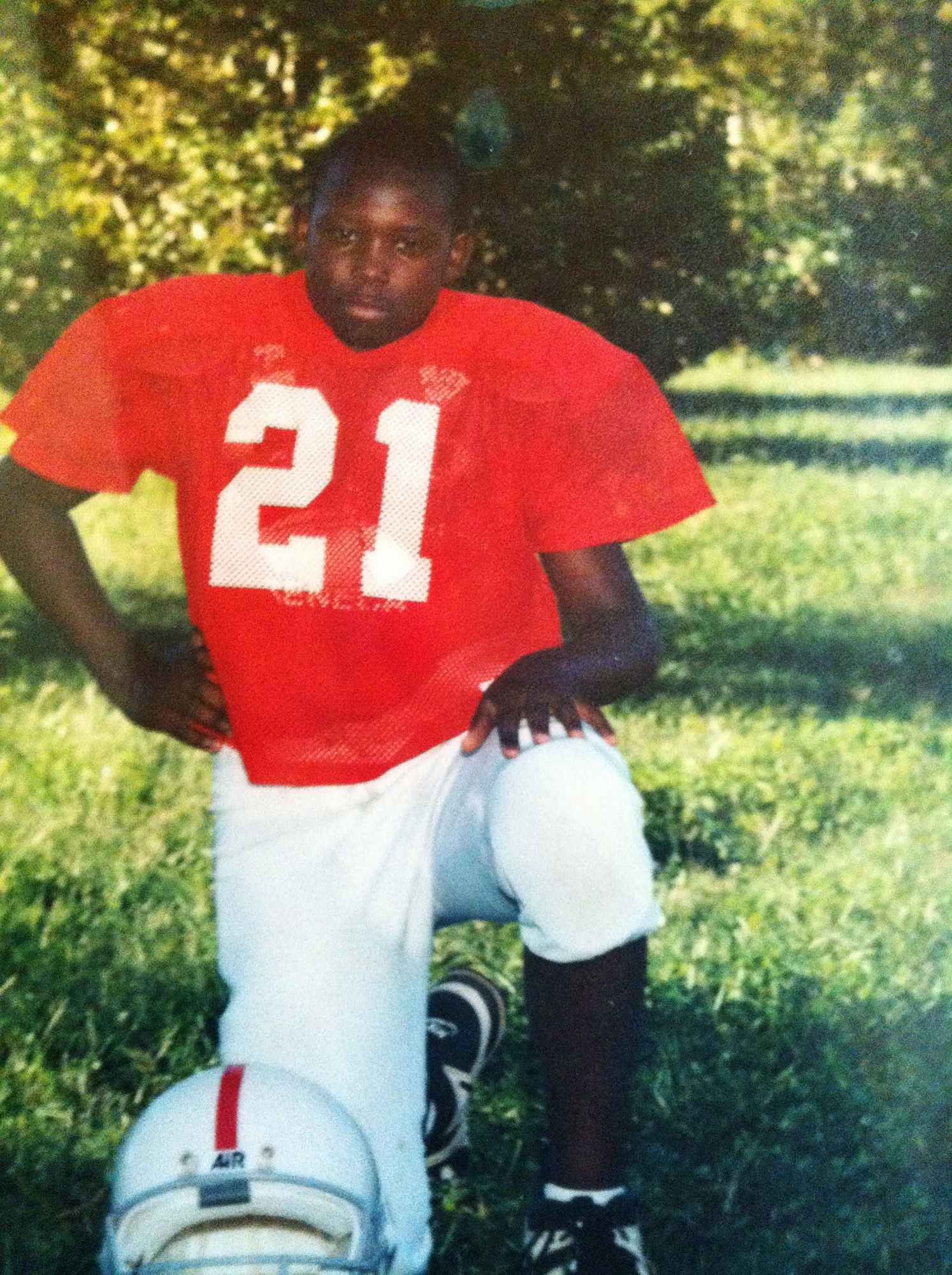 Until I I got my first fifth grade report card.

“Go get your football jersey.”

Dad had called my bluff and now he was laying down the law. He even had me read off all of my teacher’s comments out loud.

“Jarvis is a good student, but he talks too much.”

“Jarvis is excelling and learning, but his talking has to stop.”

The next day, when it came time for practice, I thought that maybe he’d lighten up. So I came home, got my pads and went to go meet him at the car.

“I told you, you’re not playing,” my dad said, my jersey in his hand. “So however long it takes for the next report card to come out, I’m holding on to this.”

My next report card would not be coming out until after the season was over. It was my last season of youth football, and I couldn’t play. All I could do was sit and watch as the other guys on my team came to school wearing their ReMax All-Star jerseys. They were red, my favorite color. The guys would give me a hard time, asking for help fixing their sleeves, brushing off their shoulders.

Not having that jersey and playing with them really hurt. Being on the football team was special. I was part of something that not everyone was able to do. And now I couldn’t suit up at all — not even for the playoffs. I had to stand on the sidelines. I got so mad that all I wanted to do was prove my dad wrong. I started to take classes seriously.

Just before the holidays, our teachers handed us our report cards.

When I got home and waited for my parents to get back from work, I did whatever I could to prepare.I tried to peek at my report card. I held it up to the light, but since it was folded up in a thick envelope there was no way to see anything. So I cleaned up my room and the rest of the house — you know, just to soften them up a bit. I did all my homework and made sure to leave it out on the kitchen table so they’d see it when they walked in.

My dad sat across from me with my report card in his hands.

He just gave me a death stare for what seemed like minutes, until he finally spoke.

“I’m proud of you,” he said with a smile and then a laugh.

No more comments about bad behavior. 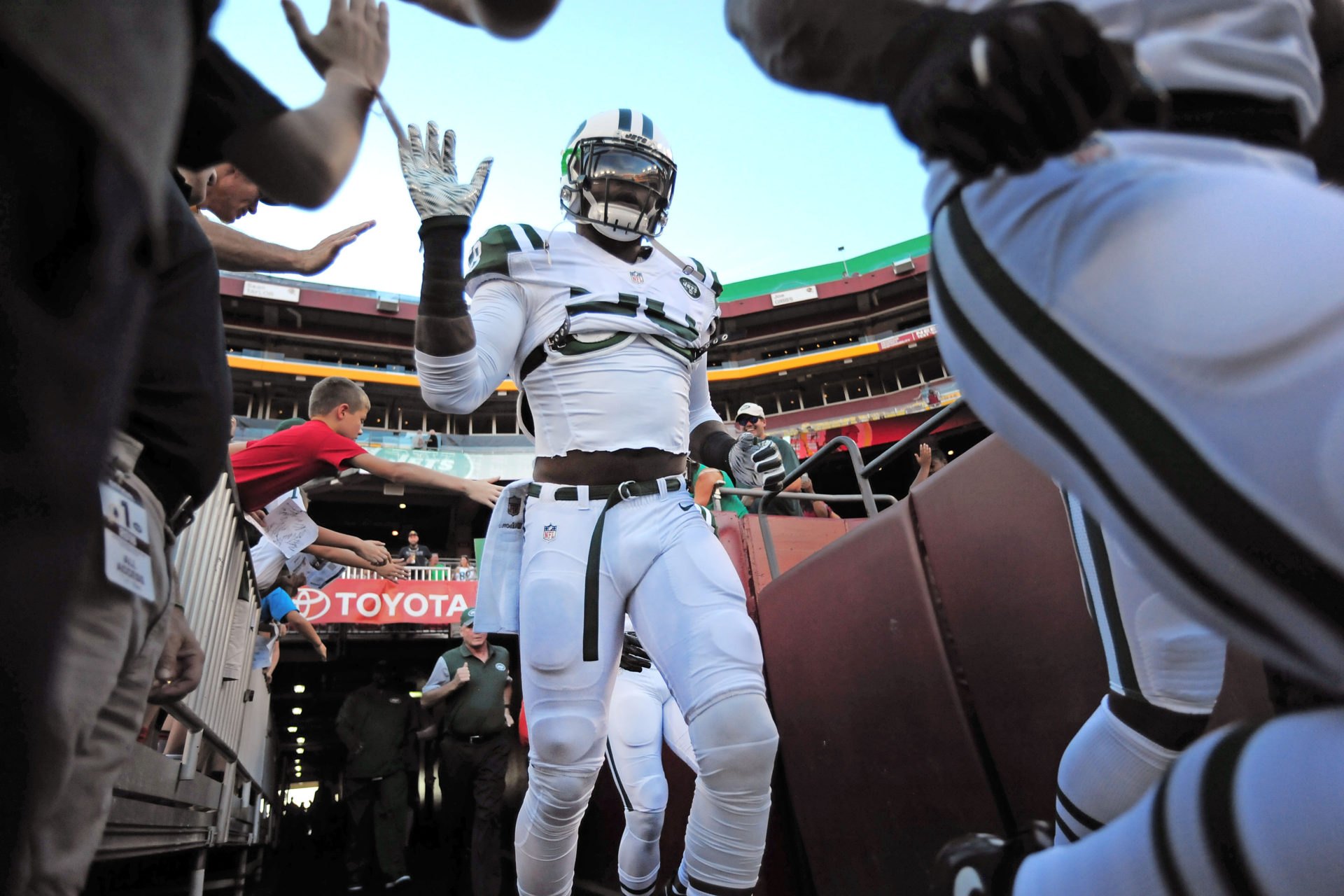 Don’t get me wrong, I was still all about getting attention from my classmates, but rather than cracking jokes I’d be the first to volunteer to read aloud. Or I’d be supercompetitive at our spelling bees. Turns out, once I started focusing, I found out that I really loved to read and write. I even liked learning how to pronounce new words, or reading stories in the voices of the characters.

At school I had always felt like I was being forced to read something I didn’t want to read. I’d look at a couple of chapters and then forget about it. But one time our teacher had us pick out our own book for us to do a report on. I picked up The Year Mom Won a Pennant. It was about this kid who loved to play baseball — just like I loved to play football — but wasn’t allowed to play because he kept disobeying his parents.

Honestly, it was probably the first book I read, cover to cover, page by page.

Yooooo, I thought, this is actually fun. 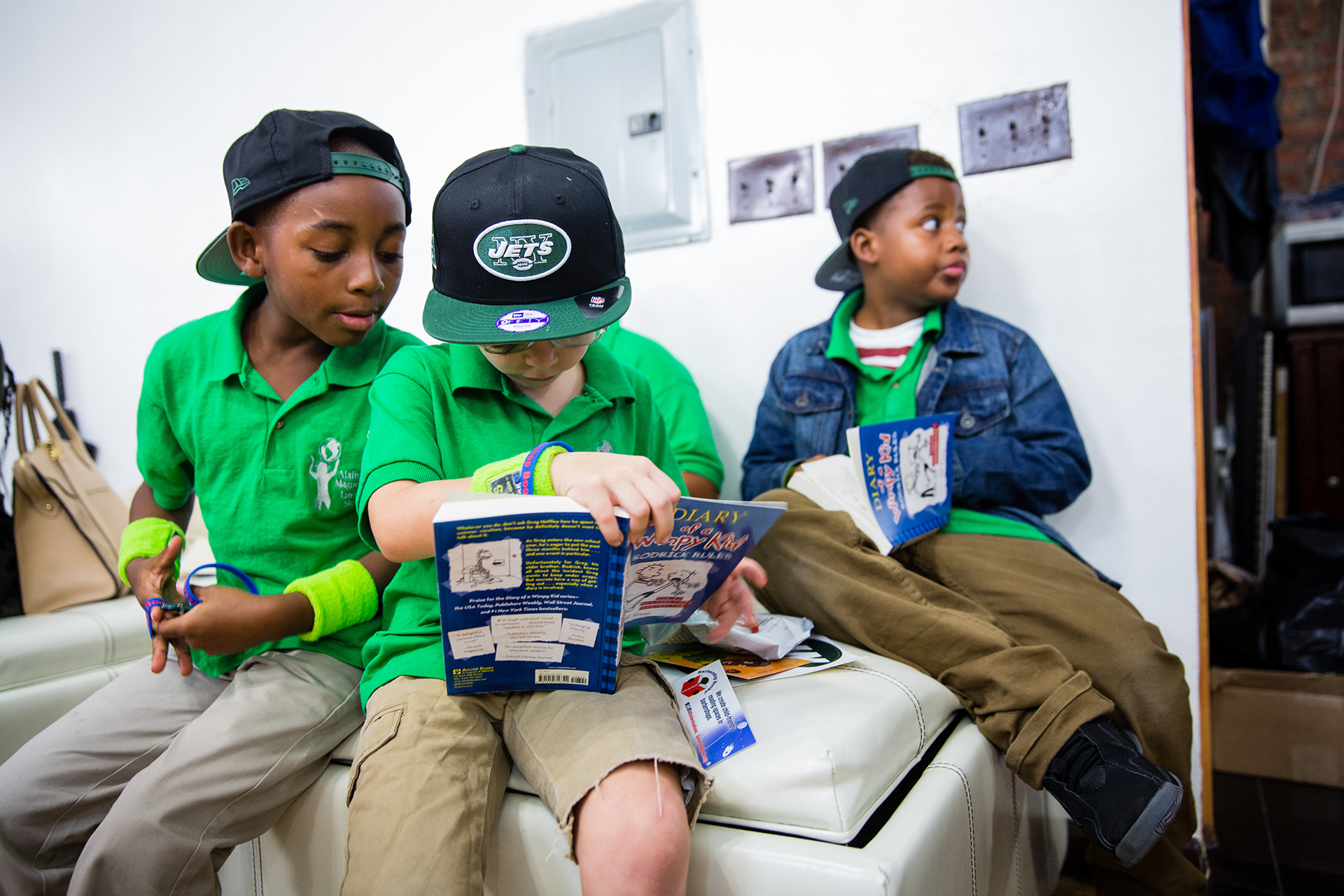 And I never had a problem with my behavior again. Football was such a vital part of my life that I didn’t want to do anything to risk it taken away again. And when I got to high school and colleges like Clemson started to recruit me, I knew what I had to do to get the grades I would need for a scholarship. At one point I was taking regular classes, home courses to improve grades from my freshman year in high school and ACT and SAT prep classes.

I signed my letter for intent, got my scholarship and left to play at Clemson. And after my first year, I came home with some news. My parents already knew that I had gotten playing time as a freshman, but there was something else they didn’t know: I had another piece of paper in an envelope for them.

I made the honor roll.

I don’t think I’d ever seen my dad so happy. I had all A’s and B’s — and no comments about my behavior.

“I’m just happy because I had nothing to do with it,” he told me. “You proved me wrong. You did it on your own.”

Football was taken from me as a kid because I wasn’t doing well in school. I had my parents and teachers pushing me, but there are a lot of other kids who could be losing out on sports or other clubs because they’re not getting the grades they need — and who don’t have anybody behind them.

When I came to New York City to play for the Jets, I heard about a program called Barbershop Books, which helps create small libraries for kids who come and hang out at the barbershop with their dads, uncles, brothers and cousins. 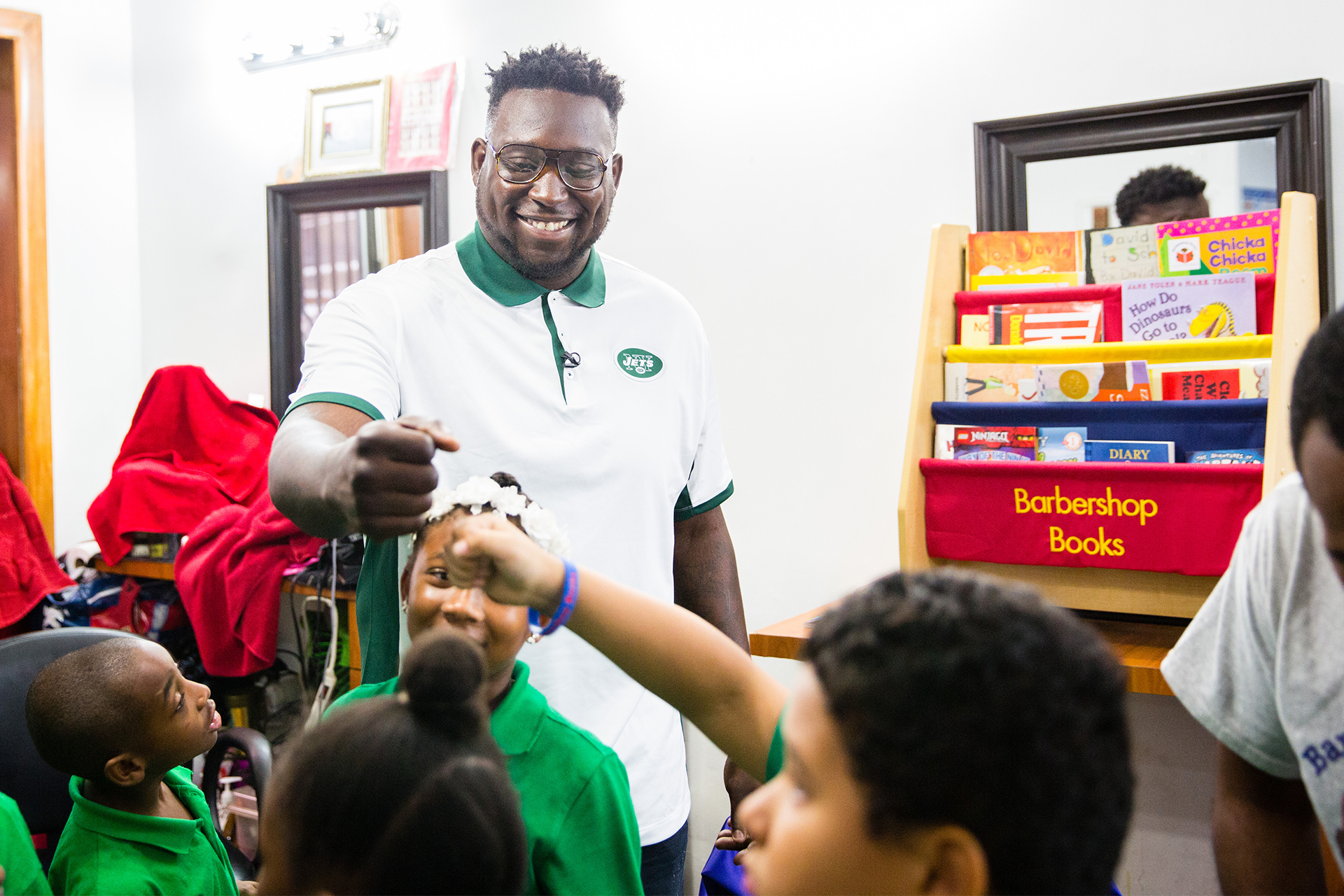 For us, video games kept us out of trouble. But why aren’t we handing kids books instead? We can still keep them occupied, but with something that can help them.

All those times I sat in Chicken’s chair, I could have been reading. If I had that mentality when I was younger, OK, come in and read a book, instead of, Play video games, I might have paid more attention to my school work. Maybe I would’ve paid attention in class a lot sooner. And maybe my dad wouldn’t have had to take football away from me.

Why not keep the kids occupied with something that will benefit them?

Jarvis Jenkins explains how he thinks books can benefit the lives of children in barbershops (1:23)

Maybe it wouldn’t have taken me so long to realize how much I loved reading.

So with Barbershop Books, we are trying to encourage young kids, and the people bringing them to the shop, to pick up a book. We all know the barbershop is the place to be on the weekends. That’s our place to escape. But it can be something more, too.

Maybe now, everyone can read at the barbershop.