What You Don't Know About: Water Polo

What’s the first thing that comes to mind when you think of Speedos?

Creepy European men on the beach?

Not gonna lie, that was my thinking too, until I was 13 years old — peak public humiliation age —  and found myself standing at our local pool for my first water polo practice with a pair of them underneath my board shorts. Growing up in Orange County, board shorts were practically a second skin. Seriously, I walked out the door once to go to a wedding in board shorts I’d been wearing for three weeks straight like, Alright, I’m ready. Let’s roll, Mom.

So the thought of dropping my shorts in front of my fellow barely-teen peers? Yeah, no way. I told my parents, my coaches, whoever would listen, “Nope. I’m not doing it, man. I’m not doing it.”  For a 13-year-old, wearing a Speedo — in front of girls, no less, because of course there were coed practices — was the worst thing imaginable. Everyone’s teasing each other, oh man, it was like a nightmare come true.

So I had to get smart. And the version of this story — as my mother tells it —  is that at every practice, I’d tiptoe to the edge of the pool, getting as close as possible. Then I’d quickly rip of my shorts, throw them against the wall and, before anybody could could see me, I was in the water. 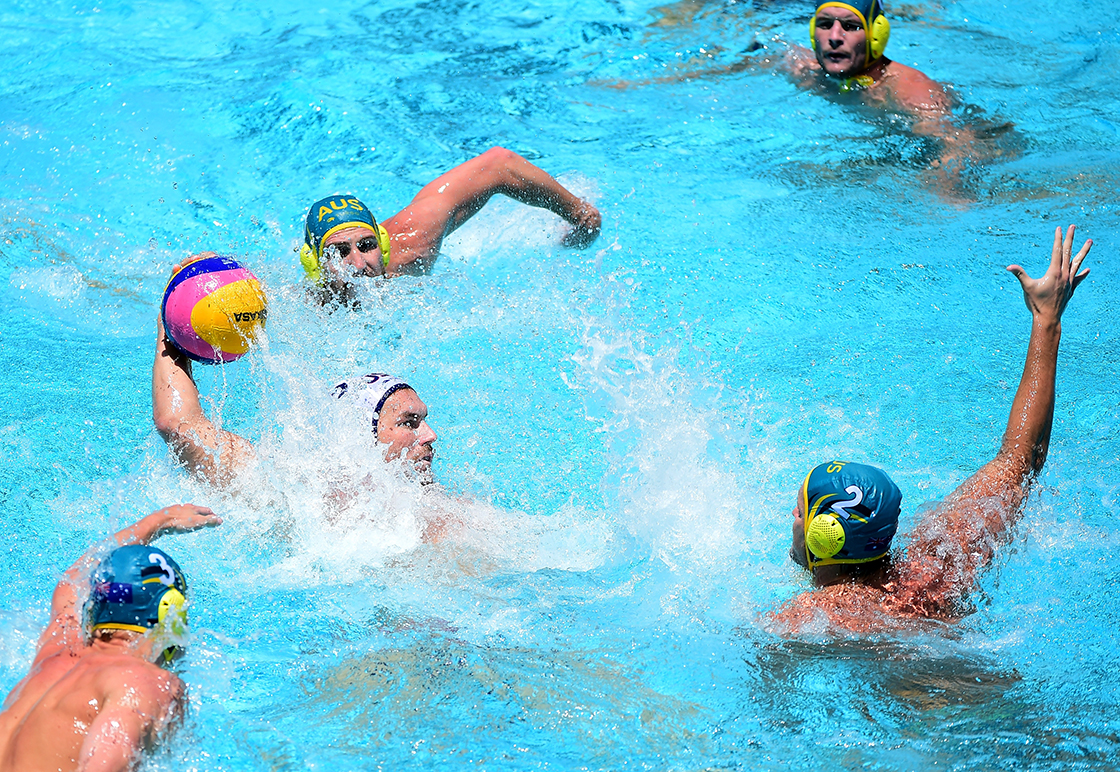 That lasted about a month, until eventually I just got used to wearing it. It’s totally normal now, and I have no problem spending 8–10 hours a day in one. It’s not an issue anymore, thank God. But it’s definitely a thing — a weird rite of passage for water polo players. Your body is on display.  Some dudes are just like permajacked. Not this dude. Never was. I’m a big guy. I’m a bear. I’m a beast. But I’m never going to be Brad Pitt in Troy, with like 32 abs. But I can definitely rip somebody’s arm off — not that I ever would. I’m a really a nice guy, I’m a teddy bear.

Unless I’m in the pool. Because once you get over the Speedo thing, there’s only water polo left to play. So outside of the Speedo, what’s the first thing that comes to mind when you think of water polo?

For those that have no idea, let me break it down this way:

If you combine the physicality of football, the grappling in wrestling, the endurance of long-distance running, the fighting in hockey, the offense and defensive skills of basketball, the fandom of soccer and, of course, some swimming, that’s water polo.

It’s big in California — warm weather, pools and water everywhere helps with that. But for me, joining the water polo team wasn’t so much about the sport itself as it was about fulfilling a dream: being an Olympian.

As a kid I’d listen to my parents talk about the 1984 Olympics, which were held in Los Angeles. I was born a year later, but just the way they described the city at the time was enough to drive me to somehow, some way, win an Olympic medal. The 1996 Olympics were the first Games I really remember watching as a kid, and after seeing Muhammad Ali light the torch, I just thought, “That’s the coolest thing I’ve ever seen!” And, lucky for me, things just kind of fell into place from there.

When I got to high school and really had to decide which sport to focus on, I was handed a gift. The water polo coach at Corona del Mar High was also the men’s Olympic team coach. I saw my pathway to the podium, and everyday after school, before my own practices, I would watch the national team work out.

Fast-forward to 2012, and I was competing in London with some of those same guys as my U.S. teammates — my Olympic dream, realized. Except that things didn’t quite go our way. We were coming off a gold at the 2011 Pan Am Games and were favored to medal in London, but we lost in the quarterfinals and never even got a chance to compete for a bronze. 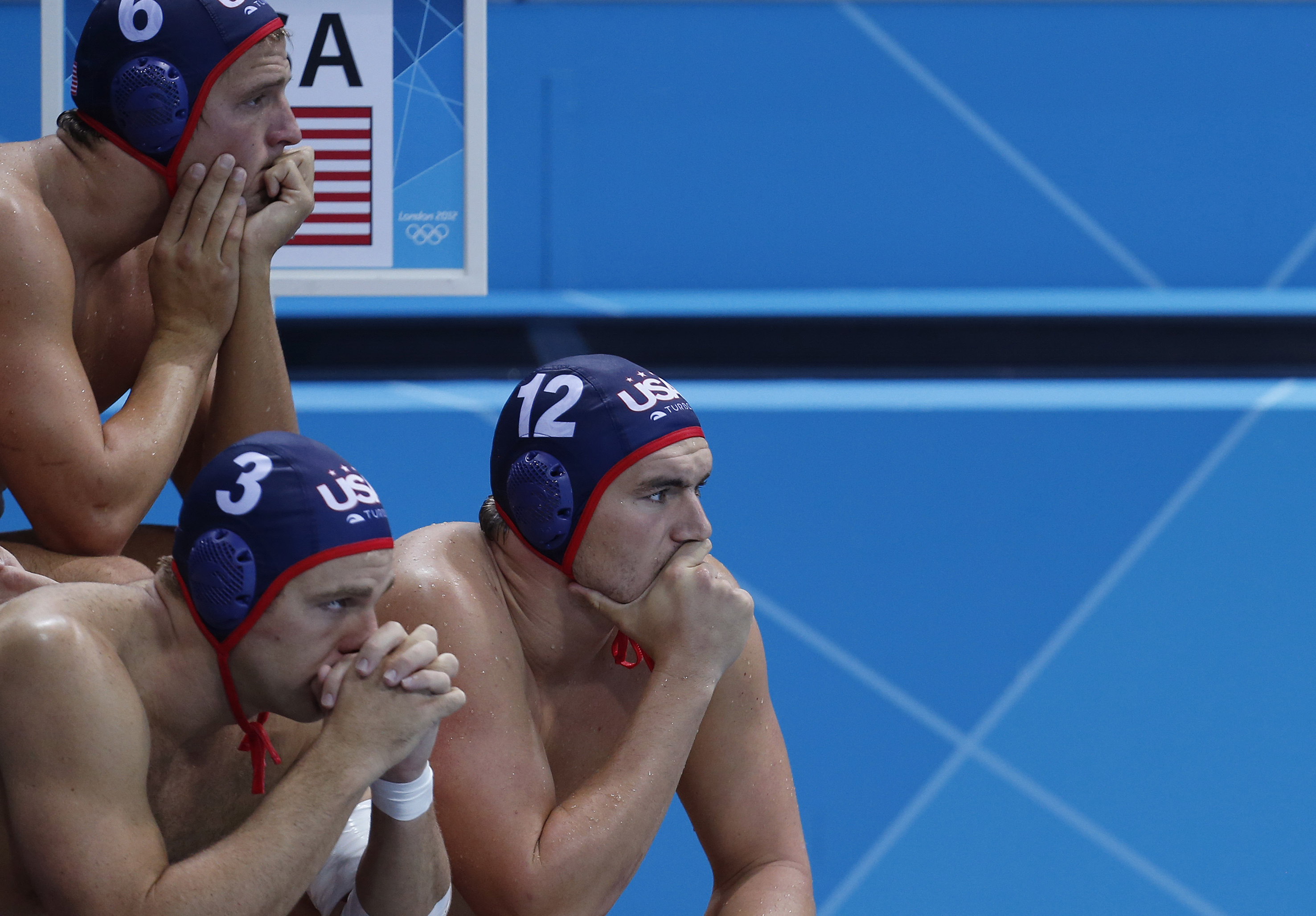 But we’re headed back to Rio, and this time, I want to get the job done. But what exactly is my job? Well, I’m the center. I’m one of the big guys in the water. Then there are five other guys out on the “field” with me.  There are our perimeter players — two wings and two attackers — who are basically like point guards, and a defender, who’s my go-to guy out there (but more on that later). And, of course, there’s our goalkeeper.

Most players have to be able to do it all, defend and attack — except for me. I’m a high-scoring center, and because of my position I don’t get too heavy on the defense. Why? Because, physically, it would be nearly impossible. My position is a lot like a center in basketball, I post up by the goal and try to dunk or score. But imagine Pau Gasol doing what he does with two or three other guys jumping on his back, trying to pull him underwater — grabbing, kicking and throwing elbows. Then to keep doing that, line to line, for 32 minutes straight?

That’s why our defender is so important to me. And just like I focus on offense, he focuses on protecting me. Now I’m six-foot-six and about 260 pounds. He needs to protect all of that to help me do my job on offense. So he’s got to be a pretty big dude as well. We’re a couple of Gronks out there.

The game itself is is a lot like basketball in the water. We have a perimeter offense, and a transition game, but goals only count for one point and they’re not easy to come by. So in a way, it also like soccer. Even the best of teams will only score eight or 10 goals a game.

I’ve got some tools to try and score. My main tactic is my power move. What that means is I really just try to spin as fast I can in the water while some guy is on me like a human backpack. If all goes well, I spin 180 degrees to get defenders off me and slam the ball in the goal.

And if that doesn’t work? Time for a step-out. With my back to the goal and the defender, I move to the ball that’s been placed in front of me in on the surface of the water by my teammates. At the same time, I reach behind me to push off the defender’s chest as hard as I can while turning and shooting.

Lastly, I can take a shot off a dry pass, which is when my teammates throw me the ball in the air and I shoot right off that.

Whatever the situation, most of the scoring in water polo is done on power plays, like in hockey.  If somebody is called for an aggressive foul, his team plays a man down for 20 seconds. That’s it. Twenty seconds to capitalize. 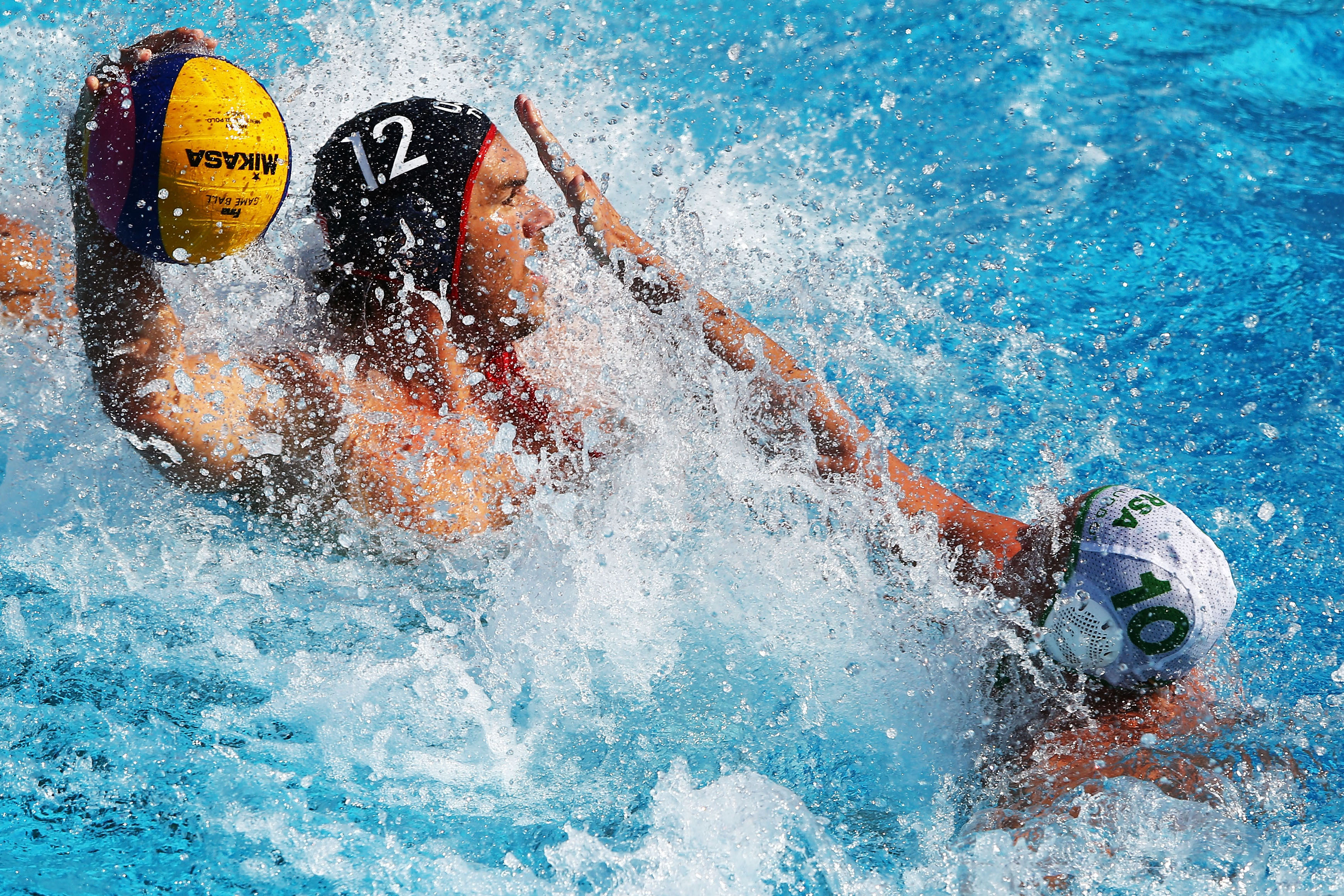 But what makes water polo unlike any other sport in the world is just how physically demanding it is. Our games last 32 minutes, but including stoppages for goals and fouls, we’re in the pool for well over an hour. And it’s nonstop. No line changes and substitutions can only be made in dead time. Each quarter is eight minutes. That may not sound like a long time, but believe me, it’s excruciating. If there’s no timeout during a quarter, you get to the point where even pulling yourself out of the water is a battle. We can’t touch the bottom of the pool and can’t hold on to the wall. Even if there’s a timeout, we’re still treading water. Our bodies are never not grinding.

And when we’re not competing, we’re training up to 10 hours a day. And we eat. Thousands of calories a day go into my diet. I could literally eat a whole cheesecake, and still have a couple of thousand calories to mess around with — like 14 slices of cheesecake and I’d still be good. (Just don’t tell Coach.)

Everything comes down to our physical strength. Because no matter what you (and the refs) can see above the water, there is a war going on underneath the surface. The referees are above the water on walkways and pedestals. They can’t really officiate on what’s going on underwater unless something is absolutely clear, like if a guy comes up from underwater and there’s blood everywhere. There’s only two refs for 12 guys in the pool, so there’s plenty of opportunities to get jabs in.

Under the water, the refs can’t protect you.

Usually, at our level, people play with respect and the games are fairly clean. But that doesn’t mean that someone won’t be grabbing me and pulling me and pushing me and trying to drown me. During one training session in Serbia, a guy’s elbow connected with my cheekbone and split it open. Right away, I heard a popping noise and knew it wasn’t good. Imagine cracking open a lobster tail. It was disgusting. Blood was clouding up the water. But just like in hockey, you leave the game for a bit, get stitched up and get back in there. We just have to make sure that we’re constantly putting Vaseline on our stitches during the games to keep the sutures from falling out because the water makes our skin so soft.

Other than that, though, water makes for a pretty forgiving playing field. Your head is hitting water, not the hard ground. Guys can’t hurtle themselves into me from 10 feet away at full speed with their helmets on.  You just do what you can — I just take my lumps when guys crash on me in defense and get out of there. And to be honest? I love it. Because usually if guys are coming at me pretty hard, then I’m doing my job: I’m a threat and they want to shut me down. That’s when the fun starts for me. 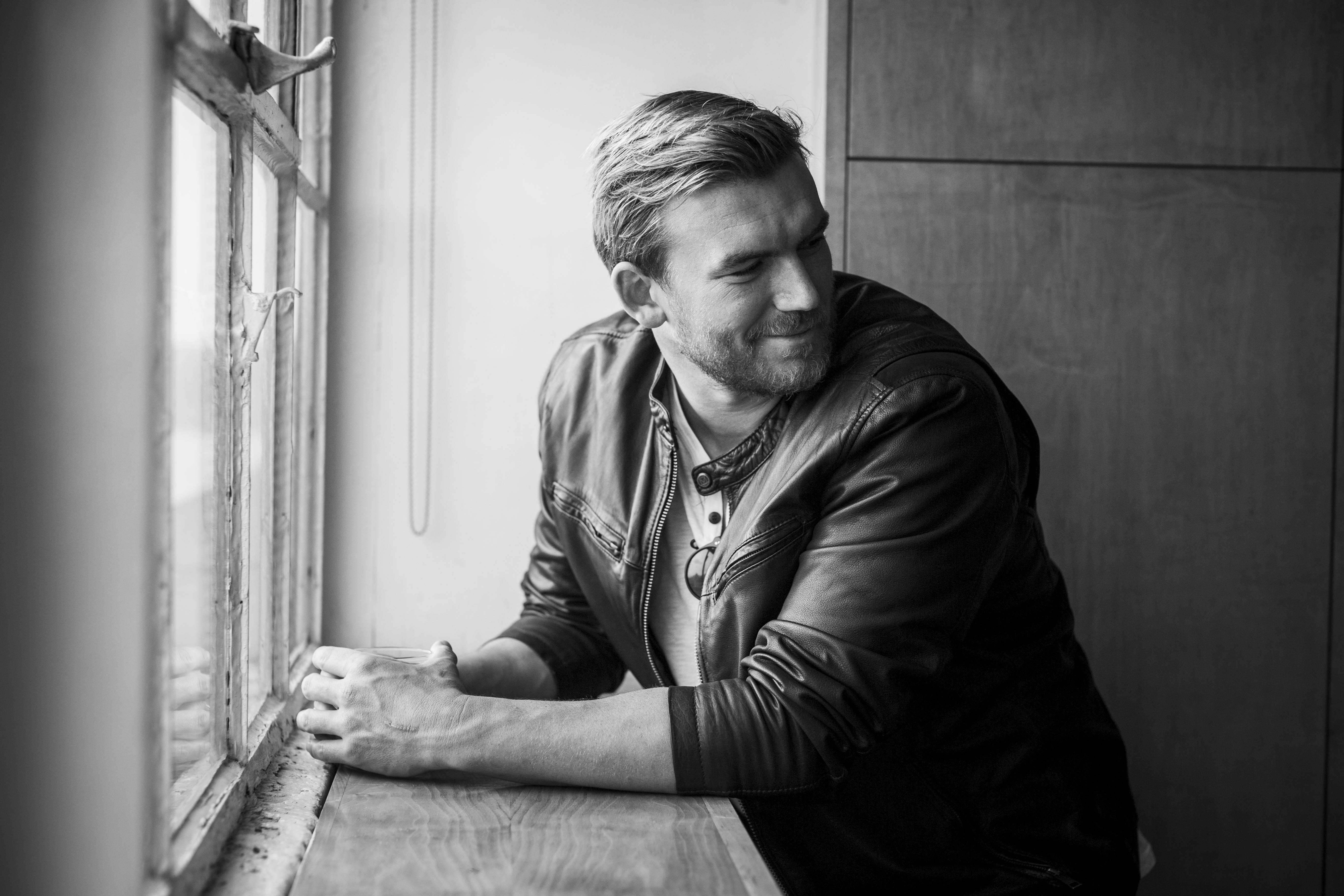 And it’s been really fun lately. Because in the last few years, Team USA has been making some enemies, and we’re heading into Rio with a target on our back.

We are a young, up-and-coming team, and no one likes to play us. We put people on notice when we beat Serbia four times last summer. I can’t remember the last time somebody did that. That’s the other part of my job, to convey to the younger guys what we did wrong in London. The lessons learned from London, I carry with me everyday. I think about them all the time.

I got goosebumps walking into the arena before my first game in London four years ago. I’m getting them right now just thinking about it. My job now is to win a gold medal with my teammates and get goosebumps all over again when I hear our national anthem.