The Best Play I Ever Made

You all are going to have to cut me some slack with this “The Best Play I Ever Made” story. I’d like to pluralize the darn thing and call it “The Best Plays I Ever Made,” because, to tell you the truth, the best play I’ve ever made comes in two parts.

Unlike some of the positions on a baseball field, a catcher has to make himself familiar with his surroundings. Now, when I grew up playing ball in the big leagues, a lot of stadiums had these quirky dimensions behind the plate. Sometimes, you were situated right by the backstop, which allowed the fans right there in the front couple of rows to let you know exactly what was on their minds. Other times, it felt like a country mile between the catcher and the fans behind him.

But either way, it was important to get to know each and every stadium. Of course, I knew Riverfront Stadium, our home turf — and I say turf on purpose, because it had an artificial surface — better than any other park. In fact, I liken Riverfront to my catcher’s mitt. There was a certain feel to the stadium, and when we played at different ballparks, it always felt a bit uncomfortable, like putting on a new glove. 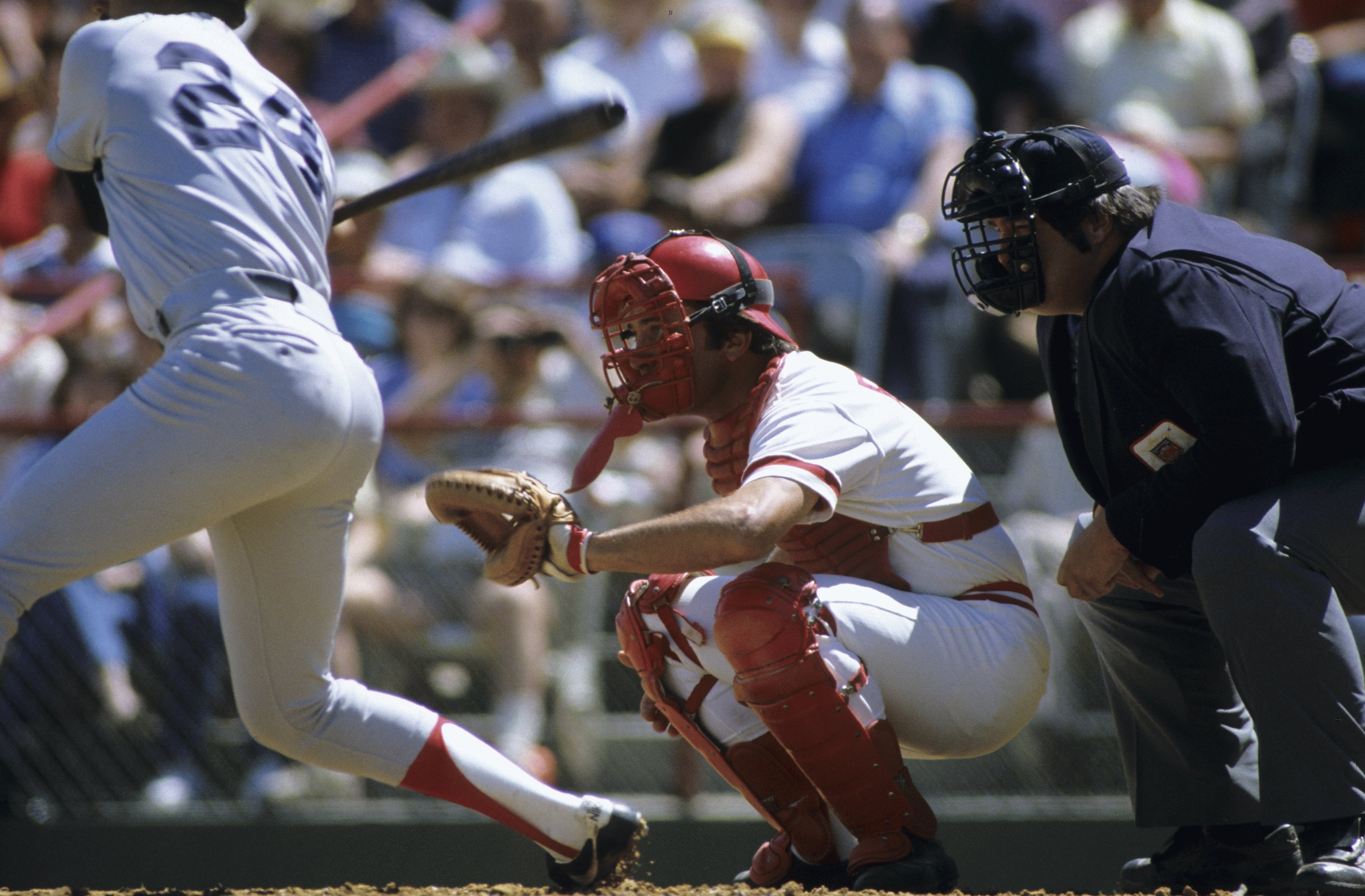 If you’re of a certain age, you may recall that there were some famous incidents around the plate at the Cincinnati Reds’ stadium. The year it opened — 1970 — it hosted the All-Star Game, which is remembered for the collision at home plate between Pete Rose and Ray Fosse. Heck, I think we’re still feeling the aftershocks of that confrontation to this day.

For me, my moment came around four years later. Some may not remember this, but there were only five spots of dirt on our field: first base, second base, third base, the pitcher’s mound and, of course, home plate. Because these areas were so small, they weren’t very useful in helping to gauge how close I was to the dugouts or the backstop on a foul pop.

I had to rely a lot on peripheral vision, experience and instinct.

It just so happened that in one game, there was a pop-up. I threw my mask off and, as I always did, tracked the ball in the air. My eyes were dancing up and down to see where I was in relation to the edge of the field. I knew I must’ve been close to the first base dugout — my dugout — because I could hear the fans getting louder and louder. I didn’t have a chance to get under this pop-up because, the way the batter hit it, the ball was flying further and further away from the batter’s box faster than I could run.

It was going to be a tough catch. 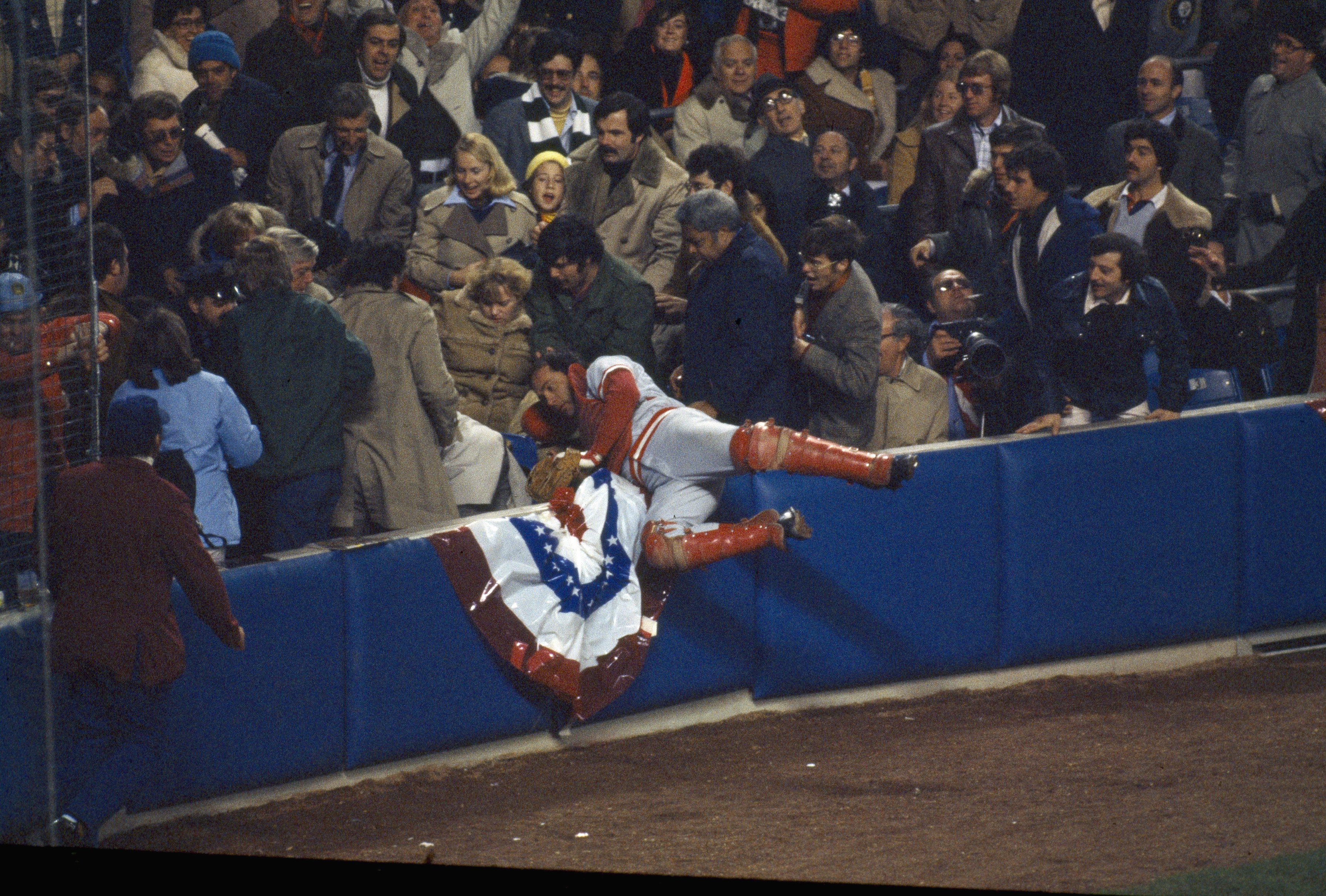 The Riverfront dugouts didn’t have a ton of screen protection. So while there were railings and a protective covering, the entrances were pretty big. When my teammates saw me barreling in without regard for anything except catching that foul ball, they knew to get out of the way.

I felt the terrain under my cleats switch from artificial turf to something much harder. Back then, the dugout floors were wooden planks, if you can categorize them as such. And man, were those planks uneven. Anyway, I turned my glove as if I were making a shoestring catch, lunged for the ball, caught it and then spun along the bat rack.

My teammates were about as stunned as I was. They gave me a few pats on the back and I trotted back out to my little dirt spot. I put up one finger and let everyone know what just happened:

It was a cool moment.

Now, if you all remember, I said my best play was actually two special plays. That’s true, because three or four innings later, we were back in the field and, wouldn’t you know it, there was another foul pop.

Well, you know, these things happen a lot of times in baseball games — foul pops. But, this particular pop-up was the mirror of the one a few innings earlier. I’m talking the exact replica, except that the ball was popped over to the visitor’s dugout along the third base side.

So, again, I threw my mask off. My eyes were, again, darting from my feet to the ball in the air. And, again, it was going to be a tough catch.

I jumped into the dugout, stuck my glove out like I was making a shoestring catch and whirled along the bat rack. I looked up at my opponents, and they gave me this look like, What the heck are you doing in here? 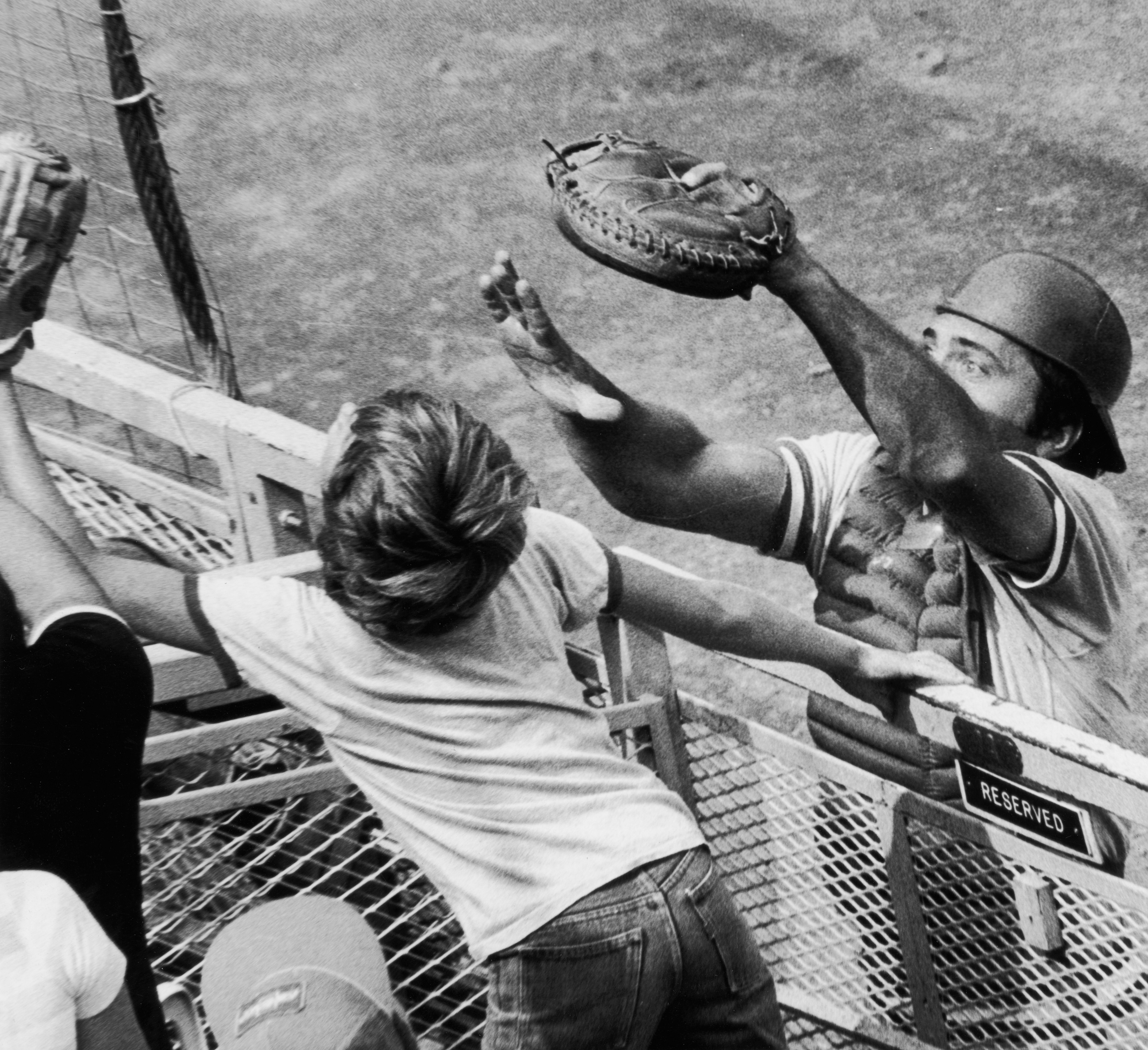 So I jumped out — no pats on the back this time — and threw the ball back to my pitcher. I held up a finger.

As I grabbed my mask and crouched down to get ready for the next at bat, I couldn’t help but smile.

Wow, I thought. Two times in one game, huh? That was pretty darn cool.

I love the defensive part of catching. I love that I always had the chance to be involved in every single play, whether it was simply catching my pitcher or running into a dugout to catch a foul pop.

Now, you’re probably thinking something’s missing from this whole story. And your thinking is correct. You’re probably asking, Would you tell me who the heck you were playing against that day?

Pardon my negligence, but to tell you the honest truth, I have no recollection of who we played that day. Now, before you get any ideas or start laughing, let me just tell you that when you play for nearly two decades, you lose track of the details of some games.

The thing about playing catcher is that you’re just trying to get your pitcher a win. It doesn’t matter who you’re playing against or when you’re playing. It’s all about making the guy up on the mound look good.

But those two plays really stand out. I would put my body on the line for the greater good. I’m tellin’ you — there was one time when I ran through a metal guardrail to catch a foul ball, which hurt like hell. After the game, I went over to the guardrail to see if I could open it, but I couldn’t. I’m still not sure how I ran through that thing, but it’s exemplary of how, in the heat of the game, I would do anything for my pitcher. 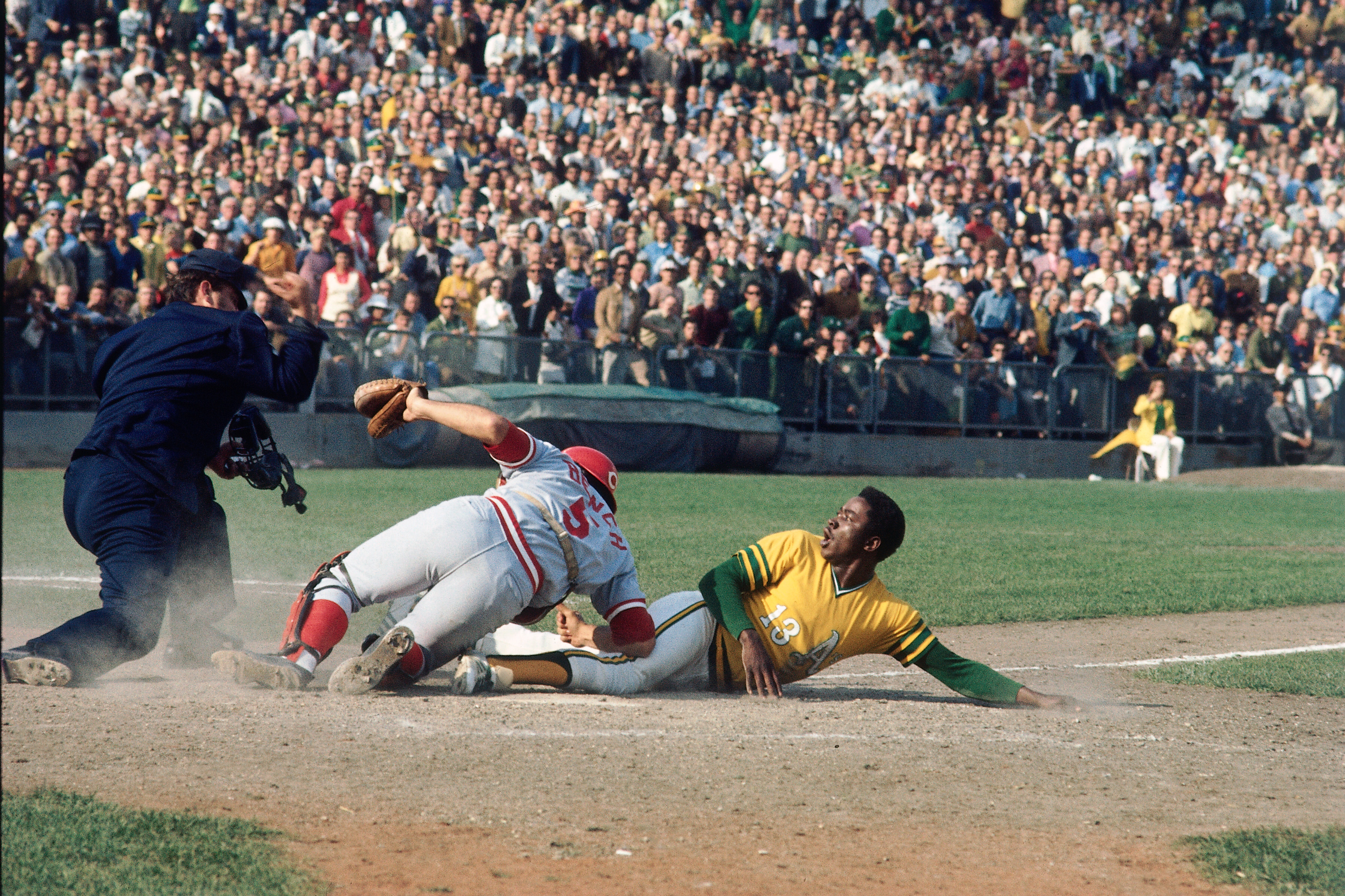 So, even if I can’t remember the exact game or the exact inning, it still gives me joy to think about those two plays. Yeah, I threw out Lou Brock stealing second base when I was around 19 or 20 years old; I blocked home plate in the ’72 World Series to prevent “Blue Moon” Odom from scoring.

But if you ask me the best plays I’ve ever made, they’d have to be diving into both the first and third base dugouts to catch foul balls along the bat racks. Those plays exhibited everything a catcher should have — a radar, a certain kind of toughness and a willingness to do anything to help the team win.