Videos
Features
The Iso: Quarantine Diaries
Letter to My Younger Self
Mental Health
Knuckleheads With Quentin Richardson and Darius Miles
Photography
You Can Be Anything
Editions

Our Road to Rio

I think every kid who has watched the Olympics has, at some point, dreamed of becoming an Olympian.

I was no different.

The Olympics were a pretty big deal in the Johnston household. Even before I started playing soccer, my parents, my sister and I would sit around our television every four years and watch the Games. My parents would tell us stories about past Olympics, like in 1996 when Kerri Strug stuck her vault on an injured ankle and clinched the gold medal for the U.S. gymnastics team. Epic.

Both my parents were athletes growing up and to them, the games meant showing my sister and I what it really meant to be passionate about a sport. What it meant to be a team player. What it meant to play for your country. Oh, did I mention we’re also hugely patriotic? Yeah, anything Team USA, or any chance to get decked out in red, white and blue — you name it, we’re on it. So the Olympics were perfect for us.

That’s of course, when the Games were in our time zone. Trying to stay up late for Sydney, Athens and Beijing was a challenge. All I wanted to do was watch the events live, maybe because it felt more real that way — like I was right there for the excitement, for the moment when a record was set or a medal was won, when a dream became reality.

“Oh, Mom, I wanna watch this! I wanna see this so bad!” Then it would hit midnight and I’d be passed out on the couch. And every morning, when I’d get up, my mom would have recorded what I wanted to see so I could watch it back. Thanks, Mom. 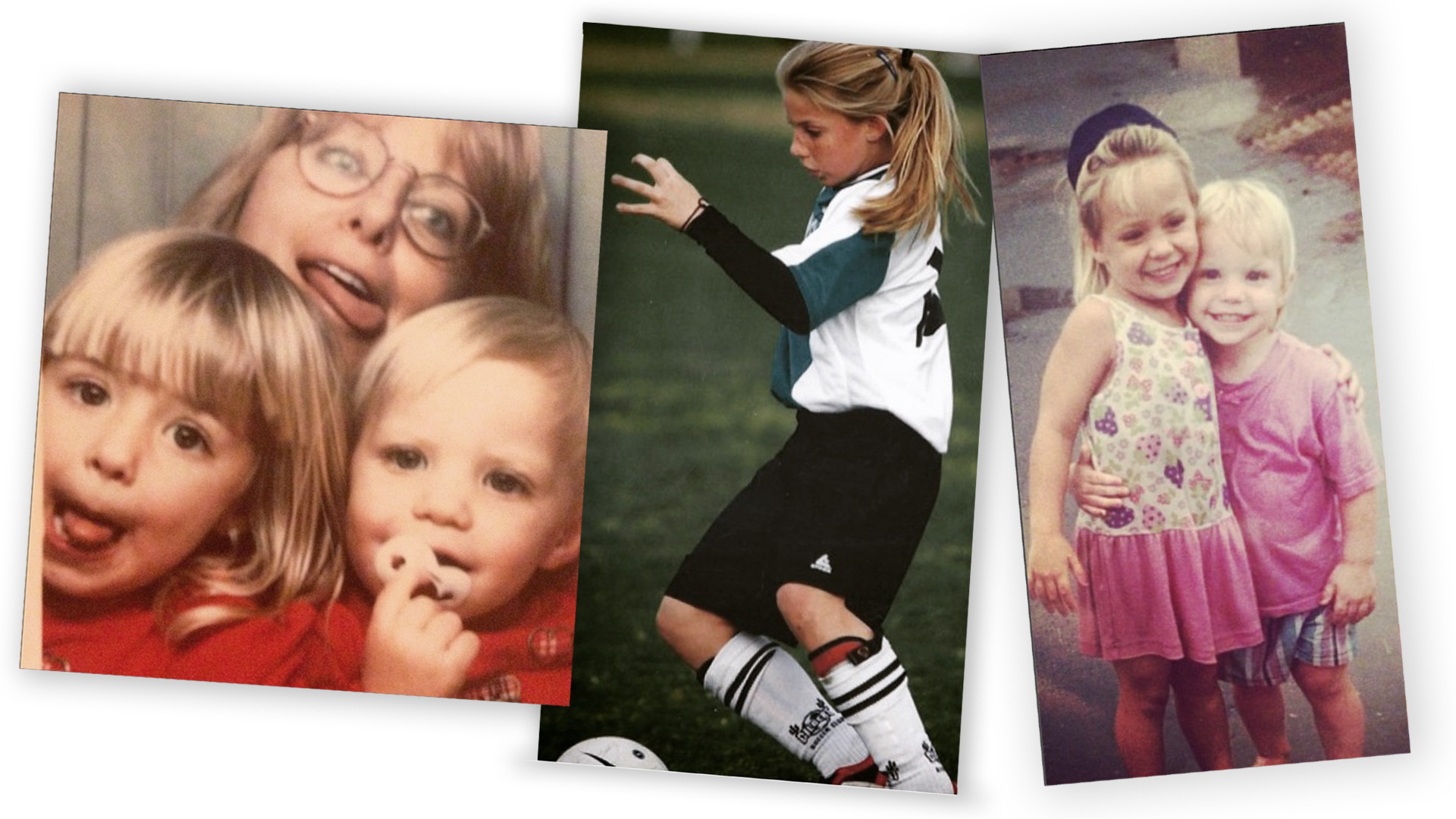 I always loved watching gymnastics and soccer, of course. When Abby Wambach broke her leg ahead of the 2008 Olympics, and then the team dropped its first group match to Norway, the adversity started early. But the players never gave up and just kept going. And throughout the gold medal game against Brazil I was on the edge up my seat, up until Carli scored in the 96th minute to win the match. I dreamed of being on that pitch. I dreamed of being an Olympian.

A dream is pretty much all it has been, though — until last year, when I felt a shift and it hit me pretty quickly, right after we beat Japan to win the World Cup.  I had been playing with the national team for three years, but the Olympics had never really entered my mind. I had just one goal: to make the World Cup roster. Show what you can do and get to Canada.

But when we were handed the trophy and I was standing there on the podium with the rest of my teammates, I looked around and only one thought kept running through my head. 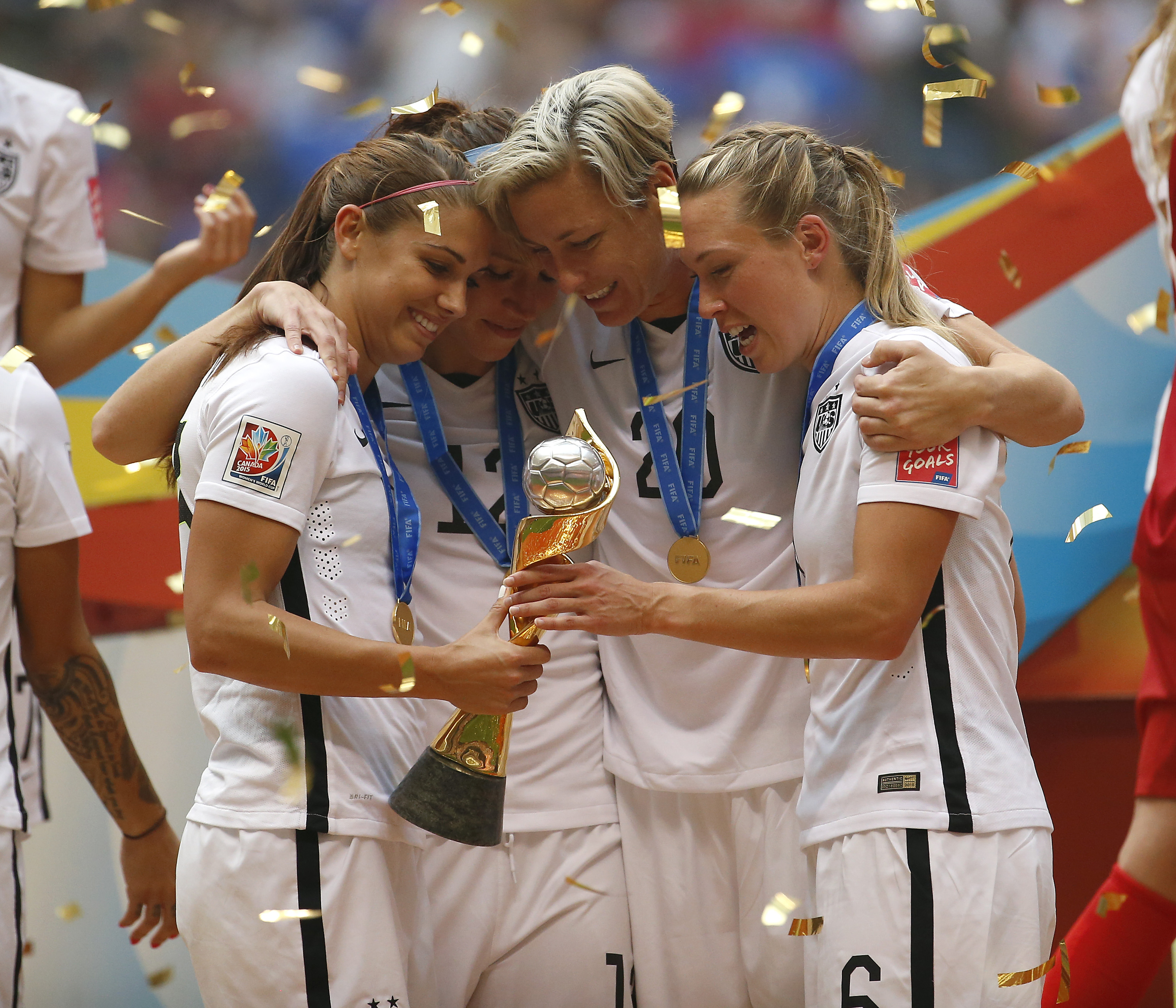 What’s next? I want more.

Don’t get me wrong. Even if I had thousands of words to write about how happy we were to win the World Cup, it wouldn’t be enough. But I think our team just wants to keep pushing boundaries, keep pushing limits, and see what we can do together. Standing on that podium, with the high of everything we had just accomplished, every sacrifice, every run, every everything — it overwhelmed me. The things I learned from my journey were life changing. One podium wasn’t enough. I want to be back on top of a podium in Rio as well.

And for us, it really has been a Road to Rio.

When we got to the first training camp after our victory tour, you could just feel it. We were sitting in a room and already there was a sign: 211 DAYS UNTIL RIO. It was all business.

Now, usually I ask all sorts of questions. What was that team like? What was it like playing there? Anything that pops into my head, I’m bugging my teammates. But this time around, I actually haven’t been my inquisitive self. Instead, I just remember this one photo.

The picture has been passed around so many times at this point that I can’t even remember who it belongs to. It’s of the team in 2012, standing on the Olympic podium. Flowers in their hands. Gold medals around their necks. And everybody is looking up at the U.S. flag. They’re drenched in sweat, their hair is soaking. You see tears. You see relief. You see accomplishment. 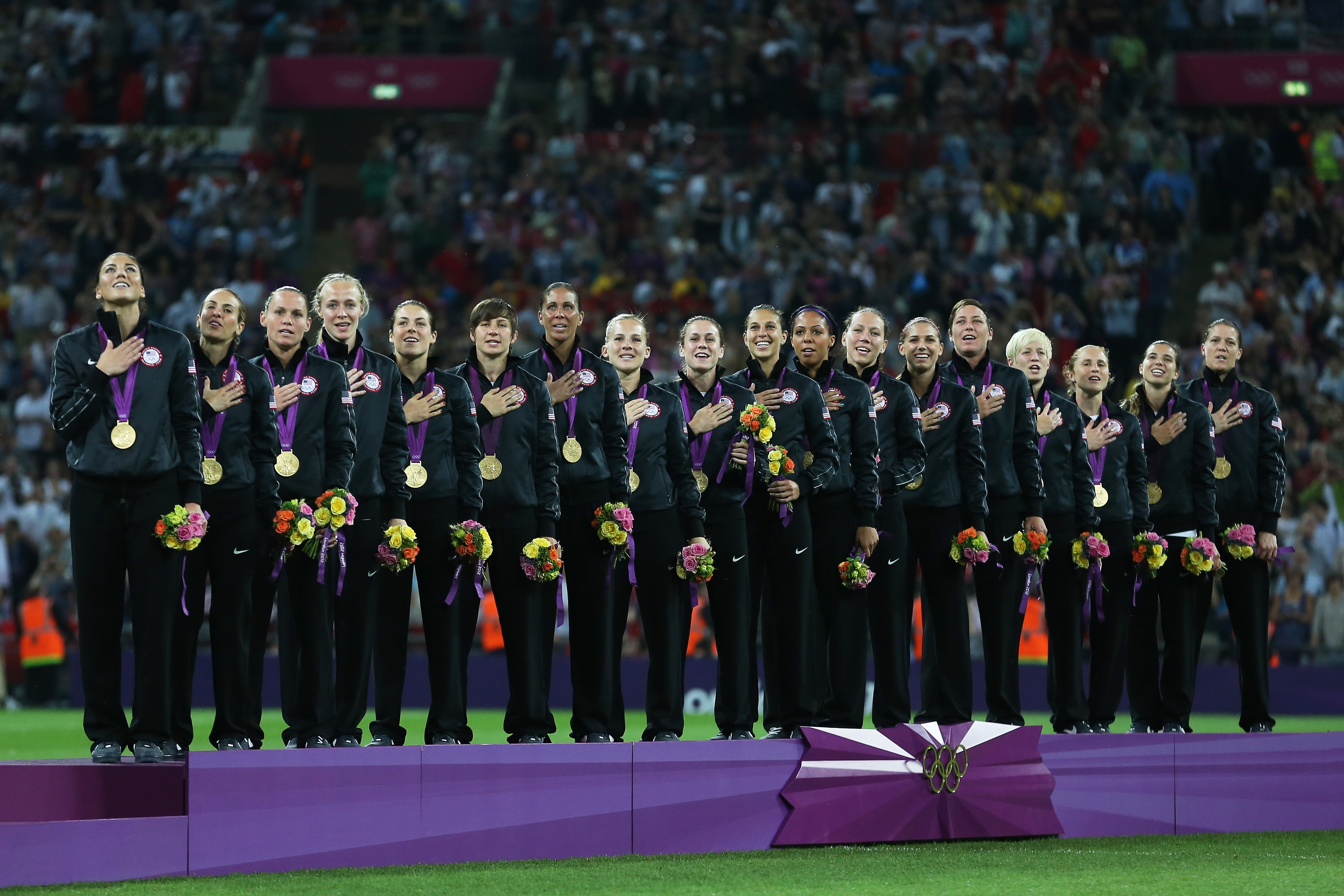 I love that picture.

And looking at that picture, I don’t need to ask questions. I know what this means to everyone. And after going through the World Cup, I want to fight for that same feeling. 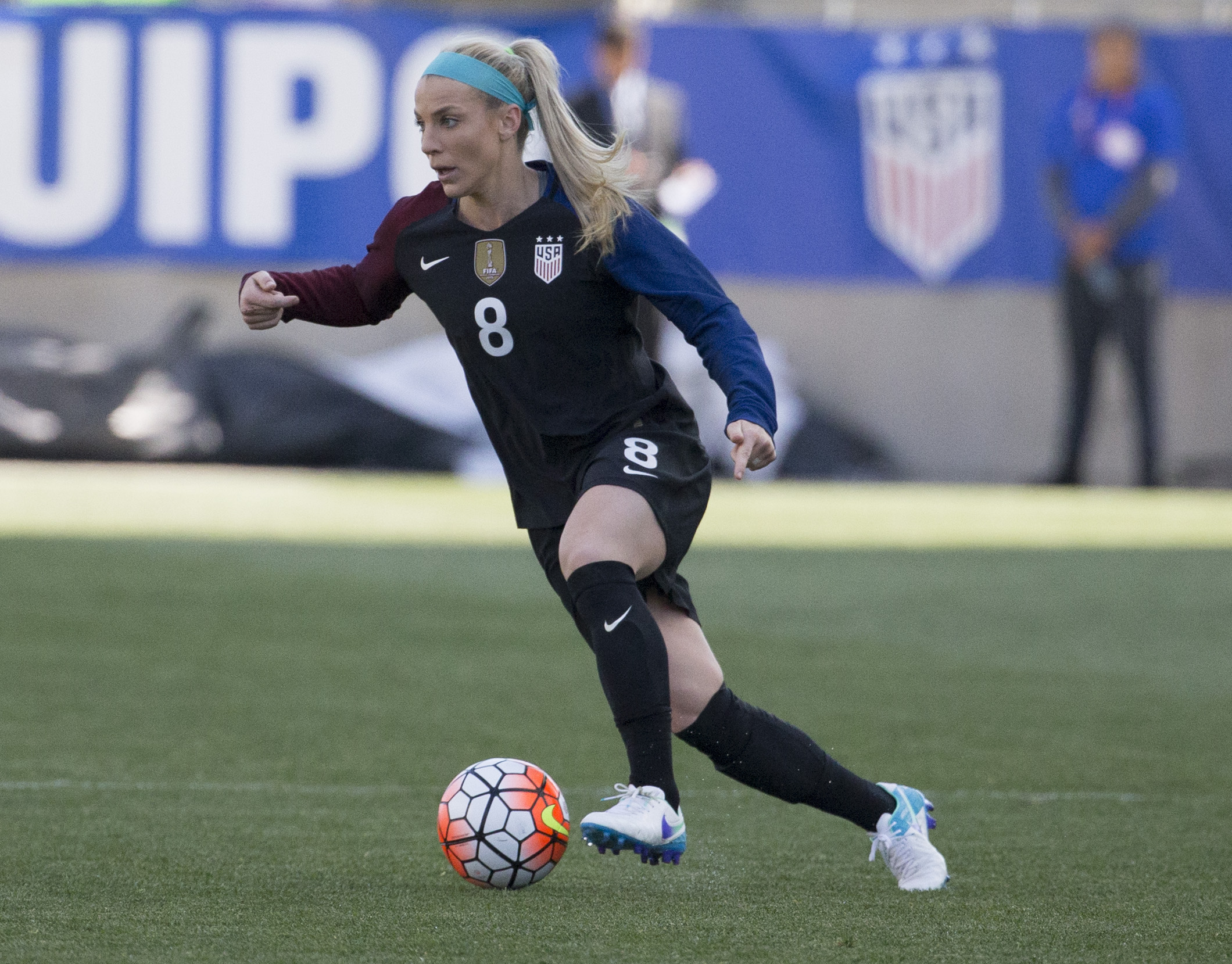 You’re gonna see Press, who I call Christen (Clutch) Press because she is the most clutch player in women’s soccer. She’s the best shooter I’ve ever seen. We play together in the NWSL in Chicago and after every practice, she’s out there taking hundreds and hundreds of shots on her own, rep after rep, so that when the moment comes, she’s prepared. My only advice on defending Christen is to recruit more defenders. And do your homework. Some great places to start — her goal against Colombia, her goal against Switzerland, her goal against China. I could go on.

I’m biased, but I think you’re gonna see one of the best back lines in women’s soccer. I have so much respect for Becky, who’s taken me on next to her — she keeps me going. There’s just this trust back there, we lean on each other to make plays.

All that is anchored with Hope. She’s not going to say a lot, but what she’s going to say will be very direct and very needed. Short, sweet and to the point. She demands perfection, and then you demand it of yourself. I came into the World Cup with not a lot of caps, but it was surprisingly where I felt most confident. That’s because of the unity we had as a back five.

I could go on about every teammate and what they all bring. At the end of the day our environment is competitive and we wouldn’t want it any other way. 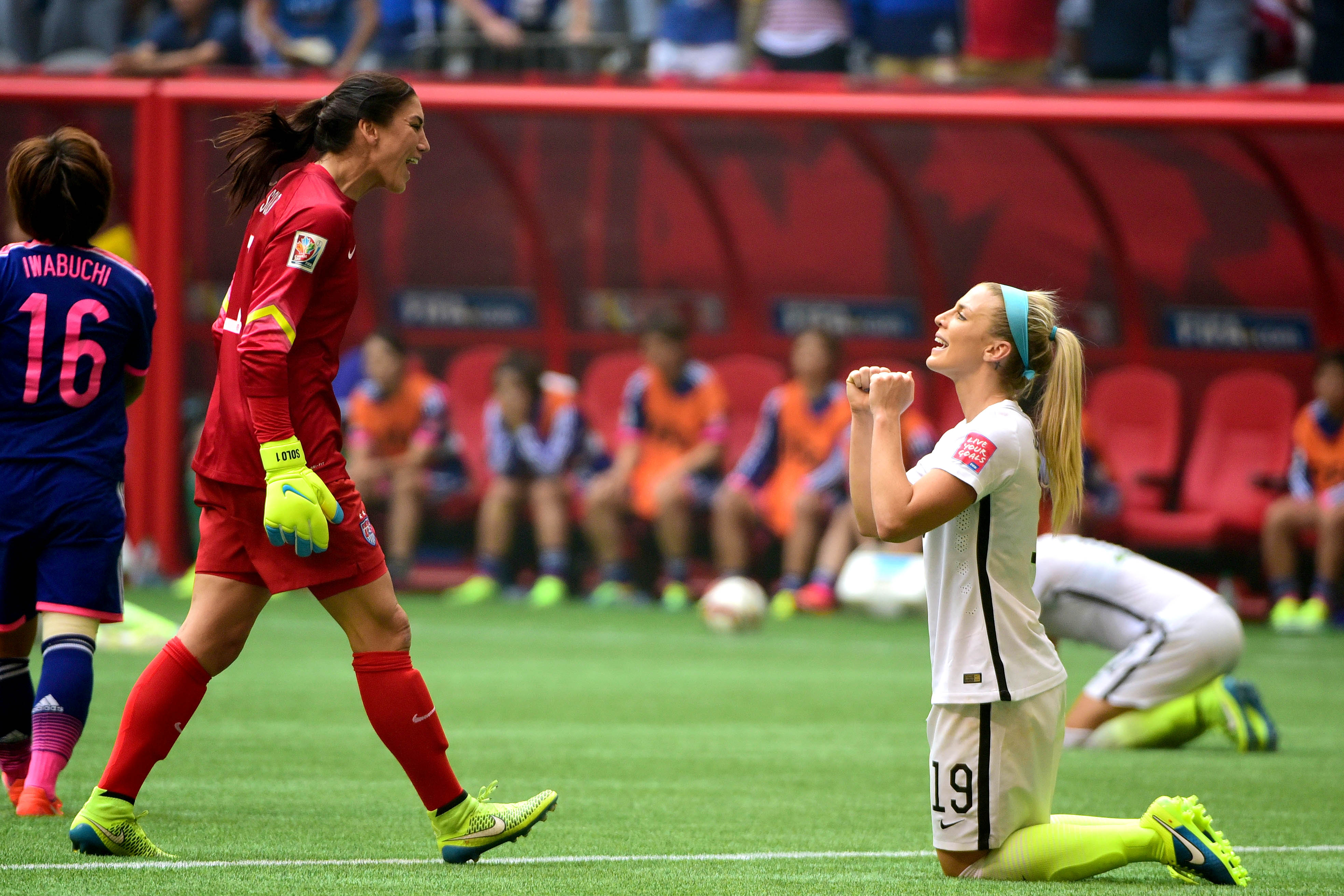 And as for me, a lot of people thought I sort of “emerged” at the World Cup — this new face who likes to make tackles. But that’s because a lot of people hadn’t seen me play before. What I did learn in Canada was that I can push myself to places I didn’t think were possible before and fall in love with a sport all over again.

This past year, our team has been fighting for a lot of other things off the field as well. When I step out onto the pitch though, that isn’t on my mind. When the whistle blows, I can’t really hear anything else. But we do know that the way we play silently helps to show people what our players and other women in sports can do. We play because we love this game and we want the same opportunities for younger generations as well.

We play so that maybe another little girl will look at a photo of our squad — standing on a podium, medals around the players’ necks, looking up at the flag — and dream of being an Olympian.

I am blessed to have that opportunity.