One afternoon a few weeks ago after arriving at the ballpark, I took a trip up to the broadcast booth. This was only a few days before Vin Scully called his last game at Dodger Stadium, and there was something important I wanted to share with him.

I had an idea — or more like a certain visual that had been running through my head lately — and I felt like Vin should know. Before I told him about it, though, we chatted for a little bit about the season.

And make no mistake about it, this year has already been one for the books.

For starters, there’s the fact that we aren’t even supposed to be a playoff team. I mean, when Clayton went down at the end of June, a lot of people assumed that was it for us. We were seven or eight games behind the Giants, and we’d just lost the best pitcher on the planet for an extended period of time.

So, you know … ballgame.

Everyone was writing us off. It looked bad. 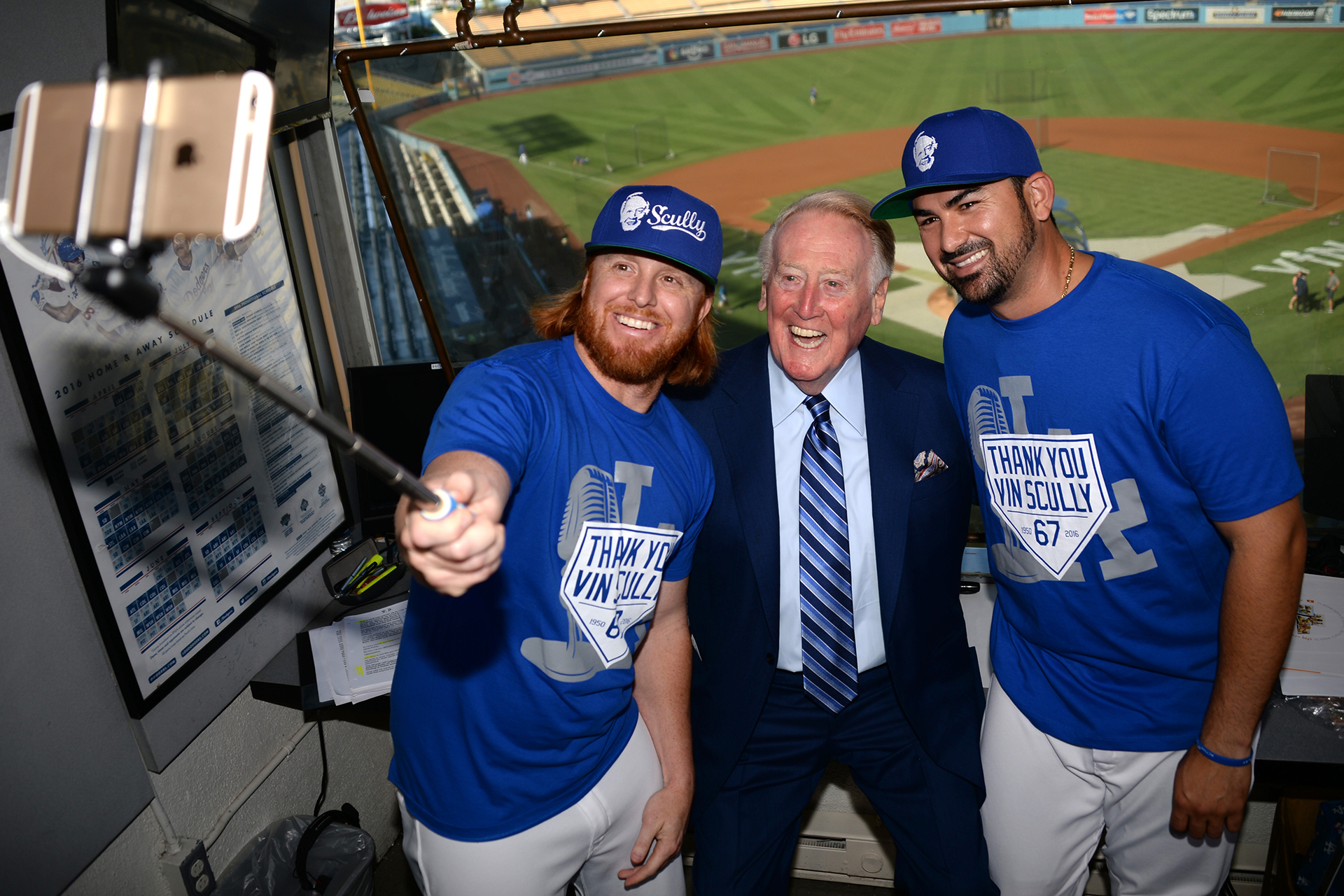 We didn’t get together and make speeches or get all rah-rah or whatever. No one was like, Hey, now we all have to try harder because Clayton’s down. We all just kind of knew what we had to do.

We didn’t need to talk … we just needed to play. Hard. Together. As a team.

I remember right after Clayton got hurt, he sent me a text message telling me not to worry about him and to make sure the guys stayed positive. I texted him right back something like: Don’t worry about us. We’ll be fine, and when you get back, you’re going to be coming back to a better team … a much better team.

And that’s basically what happened.

It feels weird to say this, but that injury, and how we rallied together afterward, was the turning point of the season for our offense. That’s when guys started clicking. I mean, our bullpen’s been great all year long — it’s been the backbone of our team, for sure. But when the offense kicked it in gear during July, that’s when we really got going.

So in my opinion, the best call we made this year, by far, was to not have a team meeting after Clayton went on the DL. If you do bring everyone together like that, sometimes it comes off as panic to guys. And that’s the last thing you want.

We just kept our cool and plowed ahead. Then we all kind of just fell in line behind Dave.

And, really, how could we not? I mean, you’ve seen the gifs!

The man goes crazy when we do great things on the field — like when Toles hit that grand slam in Colorado.

Or when Yas hit the grand slam a few weeks ago.

Dave stays positive. And I can’t tell you how important that is in our sport. Baseball seasons are loooooong, and it’s inevitable that your team is going to face adversity at some point. For us, it wasn’t just Clayton going down, it was also losing, for various amounts of time, eight of our top nine starters. There was a period earlier this season when we started four rookie pitchers in a row. You don’t see that very often.

But largely because of Dave, we were able to overcome that adversity. At no point did he ever let us mope about a bad game or sit back and worry about who was hurt. It’s been all about the 25 guys who are here, and playing each night as hard as we can.

And it’s never been one guy doing all the damage. Every game it’s been someone different — it might be Adrian or Corey one night, and then the next night it might be Howie or Yas or Chase getting the big hit. We all feed off of that, and it’s led to wins on the field.

Just as important, though, is that we all really like each other off the field. We just have fun together. 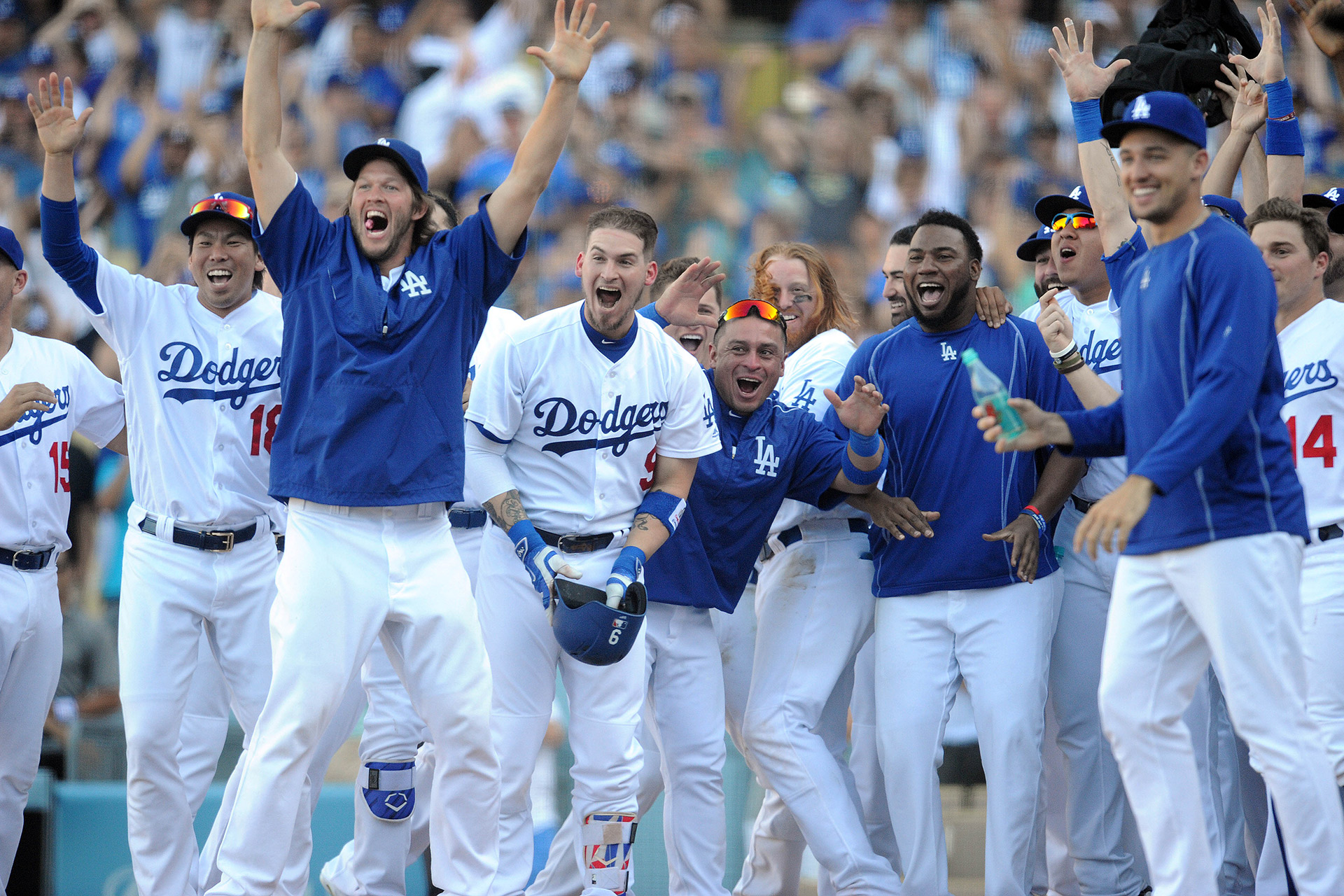 We have everything we need in our clubhouse to make a deep run in the playoffs. It’s about to get reeeeeeeaaaaaal interesting over the next few weeks.

Here’s one example. The other day, I hatched this plan in our clubhouse. We have an intern on our medical staff named John Erb who does all these amazing impressions of our players and coaches.

You should see this guy. He can impersonate anyone. For real. It’s incredible.

So, anyway, I decided to go out and buy a big speaker and a microphone for him. Then we set up a stage in the clubhouse and called everyone in.

After people gathered around, Erb did a 10-minute comedy skit where he basically ran through all his impersonations.

I mean, he nailed it. Every impression was better than the last.

His J.P. Howell was amazing. And, oh man, his Dave Roberts! Erb had the clipboard in his hands and was walking around with his chest puffed out. It was great. Guys were dying — just on the floor laughing their asses off.

It was one of the better clubhouse gatherings I’ve been a part of in a while.

In all seriousness, though, we have a blast together, and I love this team. We have everything we need in our clubhouse to make a deep run in the playoffs, and it’s about to get reeeeeeeaaaaaal interesting over the next few weeks. 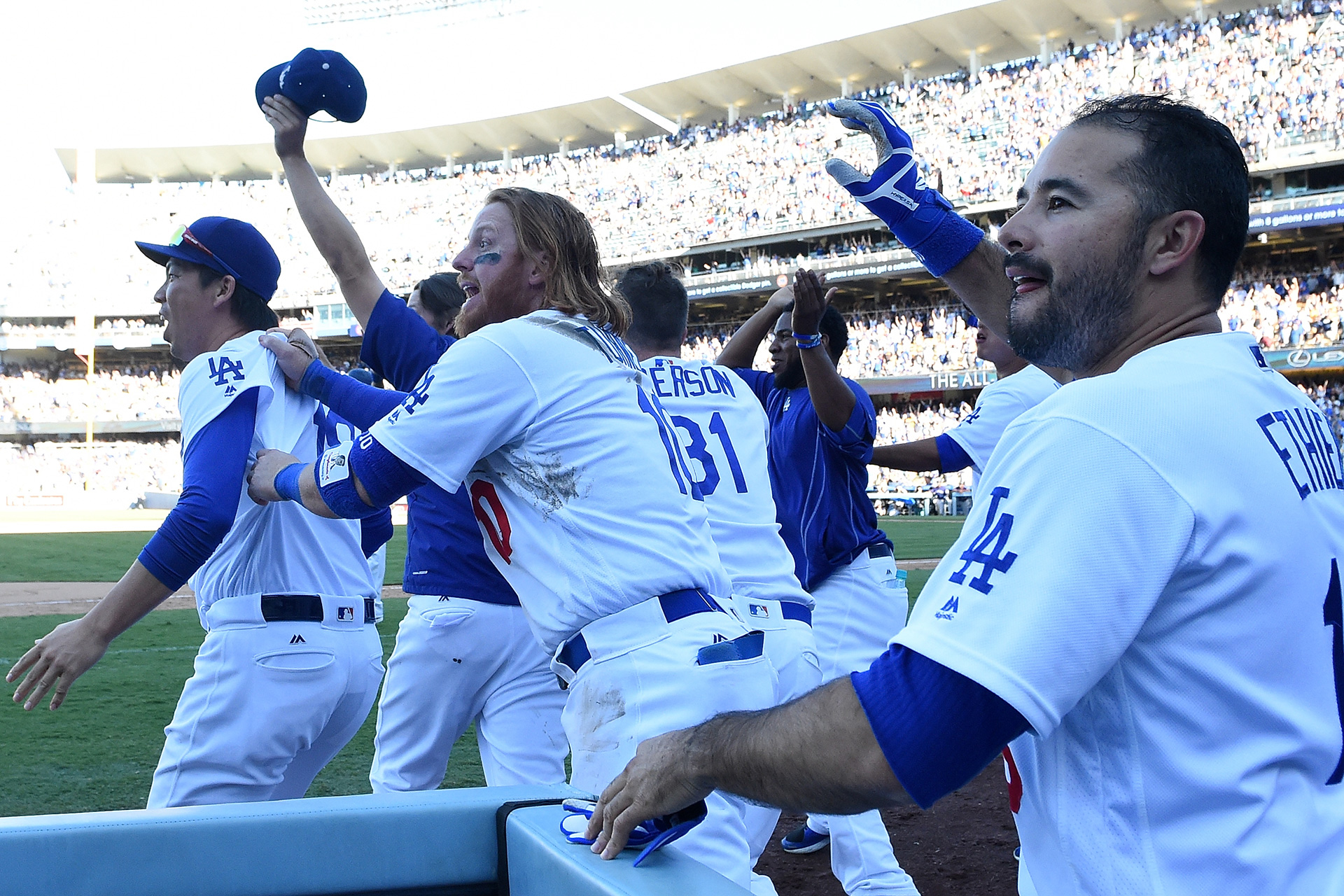 This team has a grit to it. We play hard for 27 outs every night. We’re one of the top teams in baseball in come-from-behind wins this year, and that’s because we never take anything for granted. We play hard, we run the bases hard and we take good at bats.

For me, all of that means we’re gonna be pretty dangerous in the playoffs. And everyone in that clubhouse is super excited about the team we have right now.

But, believe me, to get where we’re looking to go, we’re going to need our fans to help lift us up. And I want all of you to know just how much you mean to us.

The energy you bring to the stadium every night is special, and we know you’re going to be even more hyped-up during the playoffs. It’s just different in October. When I hear the fans roar as I’m taking the field for a playoff game, or I get a big hit or make a great play in the heat of a tight series, it’s unlike anything I’ve ever experienced.

I’m getting goosebumps just thinking about it.

And let me just make one point real clear: For me, personally, the possibility of doing something historic during these playoffs is even more meaningful.

As someone who grew up in Southern California, I understand what this team stands for — the history, the tradition, what it means to wear Dodger blue. 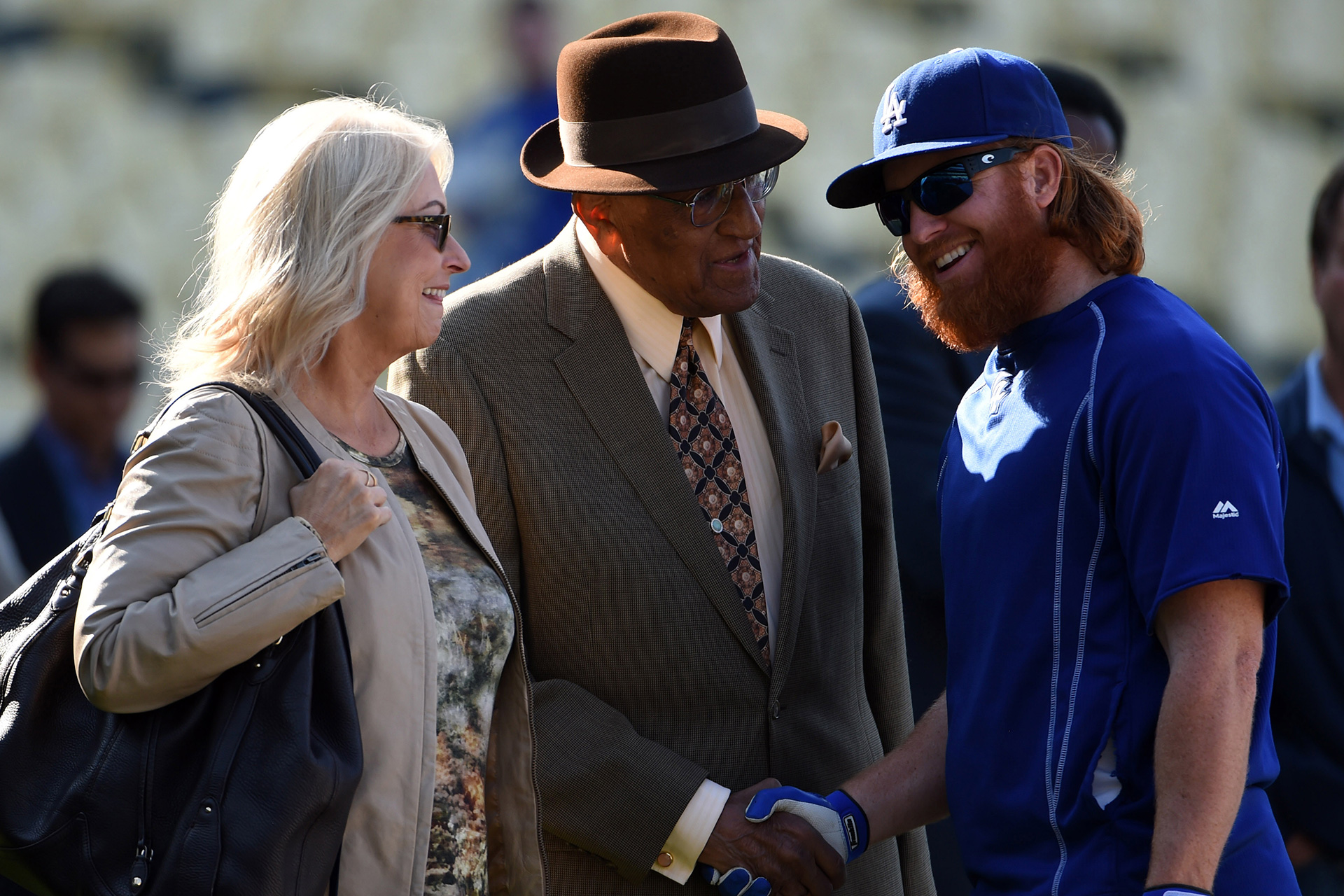 When I come to the field and see Ron Cey, and Don Newcombe, and Garvey, and Karros, and Shawn Green and a bunch of others, I know that I’m part of something truly special. I understand the significance of putting on the same uniform as Sandy Koufax, and Jackie, and Drysdale, and on and on — some of the greatest to ever play the game.

So I thank my lucky stars every single day that I’m a member of the Los Angeles Dodgers. It’s an honor that I truly cherish, and I’m reminded of how cool it is each time I make my way down to our clubhouse prior to a home game.

For instance, before I went up to talk to Vin the other day, I took the elevator down to the clubhouse level, first floor. I got to the stadium, parked my car, and then headed down there to drop off my stuff.

As soon as the elevator doors open up, I’m walking through a shrine of baseball history. The hallway that leads from that elevator to our clubhouse is lined with World Series trophies, team photos, gold gloves, Silver Slugger awards, retired jerseys, plaques featuring all the legendary players.

And I get the privilege of strolling through there each time we play a baseball game.

I’m not ashamed to admit that I like to walk down that hallway a little slower than normal, and every time it’s special. 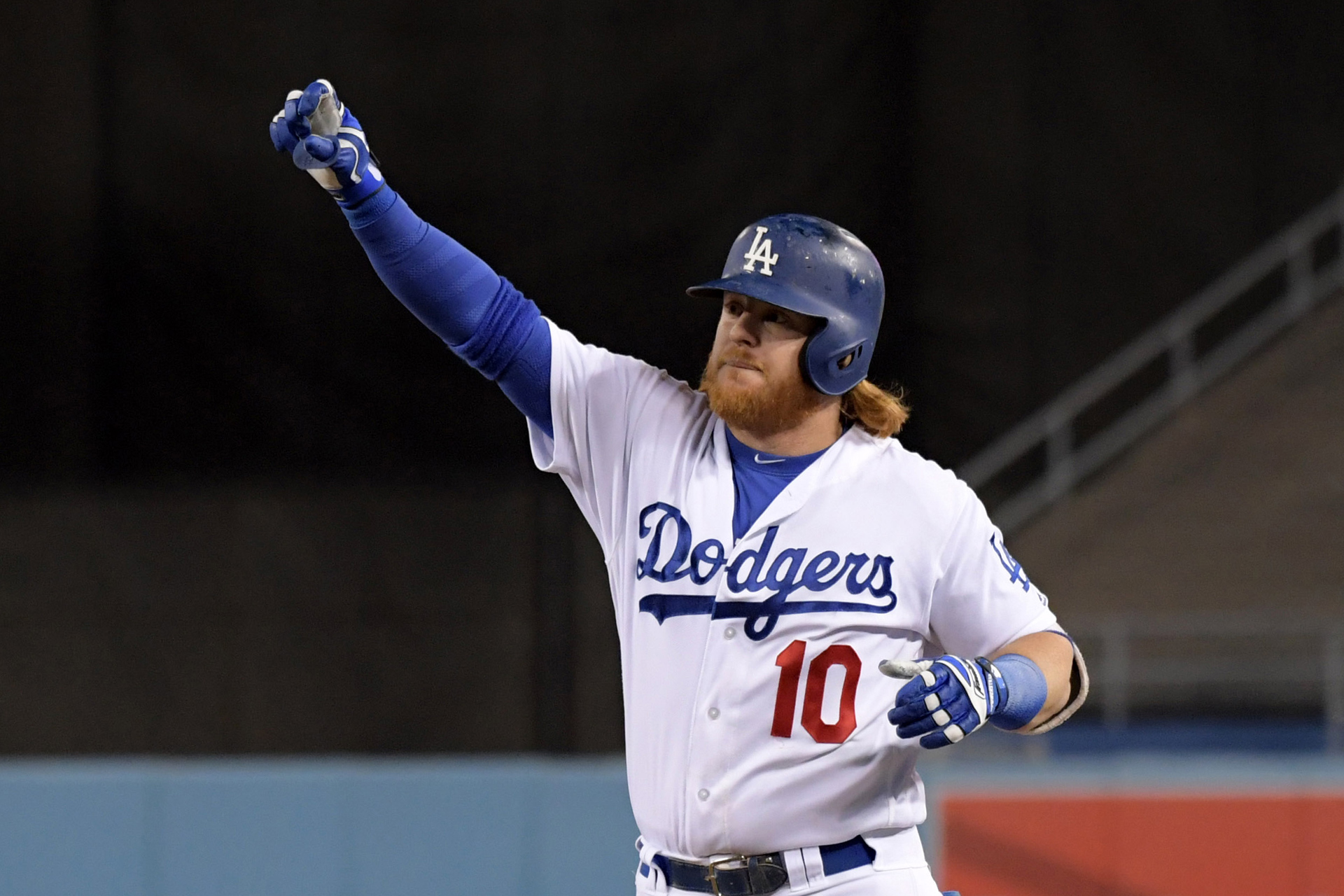 It never gets old. It hits me … every single time. I feel the history. It’s become part of me.

I know it’s part of all of you all, too.

I also know how hungry our fans are for a World Series. I live here. I get it. I understand how much this city wants another world championship. And when it does happen, believe me, it’s gonna be crazy. I can’t wait for that parade, and to be able to just look out and see all the fans out there celebrating with us.

But here’s the thing; here’s what would be the cherry on top, and what I had to tell Vin the other day up in the broadcast booth: How amazing would it be to see Vin Scully leading that parade?

I mean, I’ve already played that image in my head hundreds of times now. And it’s just … incredible.

“When we win this whole thing,” I told Vin that afternoon a few weeks ago, “you’re gonna be the grand marshall of the greatest parade this town has ever seen, and it’s gonna be frickin’ crazy.”

Vin chuckled for a second, and then he looked at me and said with a smile, “That would be pretty special.”