No Friends in the Ready Room

It’s fifteen minutes before one of the biggest races of your life.

Four years of hard work, sacrifice and risk-taking have led to this one moment.

In the arena, you can hear the roar of 20,000 fans and the announcer screaming. Your heart races as you realize that you’re up next.

You’re sitting in a room not much bigger than a large walk-in closet, surrounded by seven of the best swimmers in the U.S.

To your left is the bright-eyed and naive rookie, marveling at the sound of the crowd.

To your right is the seasoned veteran, the one with the quips and the jabs and the catty comments.

In front of you is a woman berating herself, complaining about how poorly she swam in her first race, how sore she is, how everyone will probably beat her.

A few seats over, someone is blasting obnoxious music, making sure the entire room can hear.

Out of the corner of your eye, you see another swimmer pacing back and forth and muttering.

Everyone here is trying to throw everyone else off their game, to gain whatever mental edge they can.

Welcome to the ready room.

Here’s what most people don’t understand about swimming, especially my race, the 50-meter freestyle: It’s mostly mental. The race starts before you ever hit the water, and if your head isn’t in the right place you’re going to have a bad race.

That’s your body right before a race, that pent up fizz inside the bottle just waiting to explode. On the outside, you may look as cool as a cucumber, but what no one can see is the storm that’s brewing inside of you.

The toughest part of a race is getting into that mind-set and staying there. But you’ve got to be able to do it if you’re going to survive.

That’s why there are so many mind games before swimmers even approach the starting block — we’ll do anything to throw our competitors off their game.

On the outside, you may look as cool as a cucumber, but what no one can see is the storm that’s brewing inside of you.

Our racing suits are incredibly tight. They take about 10 minutes — and a surprising amount of effort — to put on. We actually warm up in our normal suits.

At the Olympic trials in 2012, I had just finished warming up and was going back to the locker room to put on my racing suit. It was maybe 30 minutes before my race. I was minding my own business, my towel slung over one shoulder and my racing suit over the other, when another swimmer — one I’d raced against countless times — walked right in my path and looked me up and down. I could feel her judging me.

She just walked away, smug and superior.

This wasn’t the first time she had tried this sort of thing, a quick jab that was supposed to make me doubt myself. A few years earlier, she had done almost the exact same thing.

I wouldn’t say that she really got to me, but damn it was annoying.

I couldn’t afford to pay attention to her anyway. How tough you are mentally in this sport is just as important as your stroke or your breathing.

Do you know why Michael Phelps is so good? Obviously he’s a physical freak, but it’s his ability to concentrate that really elevates him. I’ve never seen anything like it.

When LeBron James blocked Andre Iguodala’s shot against the backboard in the NBA Finals this year, it was like one of Michael’s races — the focus, the instincts, the determination. There’s just something about him … when he’s behind the blocks, you can’t f— with him. He’s in the zone, and there is nothing else in his world.

His 100-meter butterfly race with Milorad Čavić in the 2008 Olympics was the perfect example. You are never, ever supposed to come in short on a race. It’s something coaches drill into you when you’re a child. You’re always supposed to be as long as you can when you’re going for the touch. If you don’t judge the wall right, you should keep reaching instead of taking another stroke. Never, never, never finish short.

Michael finished short, and it’s the reason he won. He knew exactly what would happen, and in that moment, his body was capable of taking an extra stroke. He knew making the wrong move was the right move.

The ready room is where all of the trickery and the mind games come to a head.

It’s just you and seven other competitors, sitting in this dark, cramped room for 10 minutes. It’s both a badge of honor — not every swimmer gets to be there — and a rite of passage.

I’ve seen and heard it all: trash talk, self-deprecation, screaming, vomiting — the list goes on. There are no friends in the ready room. The only ally you have is your brain. But that can be tricky, because sometimes your brain can also be your worst enemy.

In 2012, I was sitting in the ready room with seven other swimmers minutes before the 50-free finals at Olympic trials. The top two finishers would go to the London Olympics. The others would go home.

I closed my eyes, trying to block out everybody else and just focus on my thoughts.

Normally I’m pretty good at finding my center, but for some reason this time I could only focus on negative thoughts. The last two years had been pretty rough. My career — which included 18 national titles and four Olympic silver medals — had stalled. 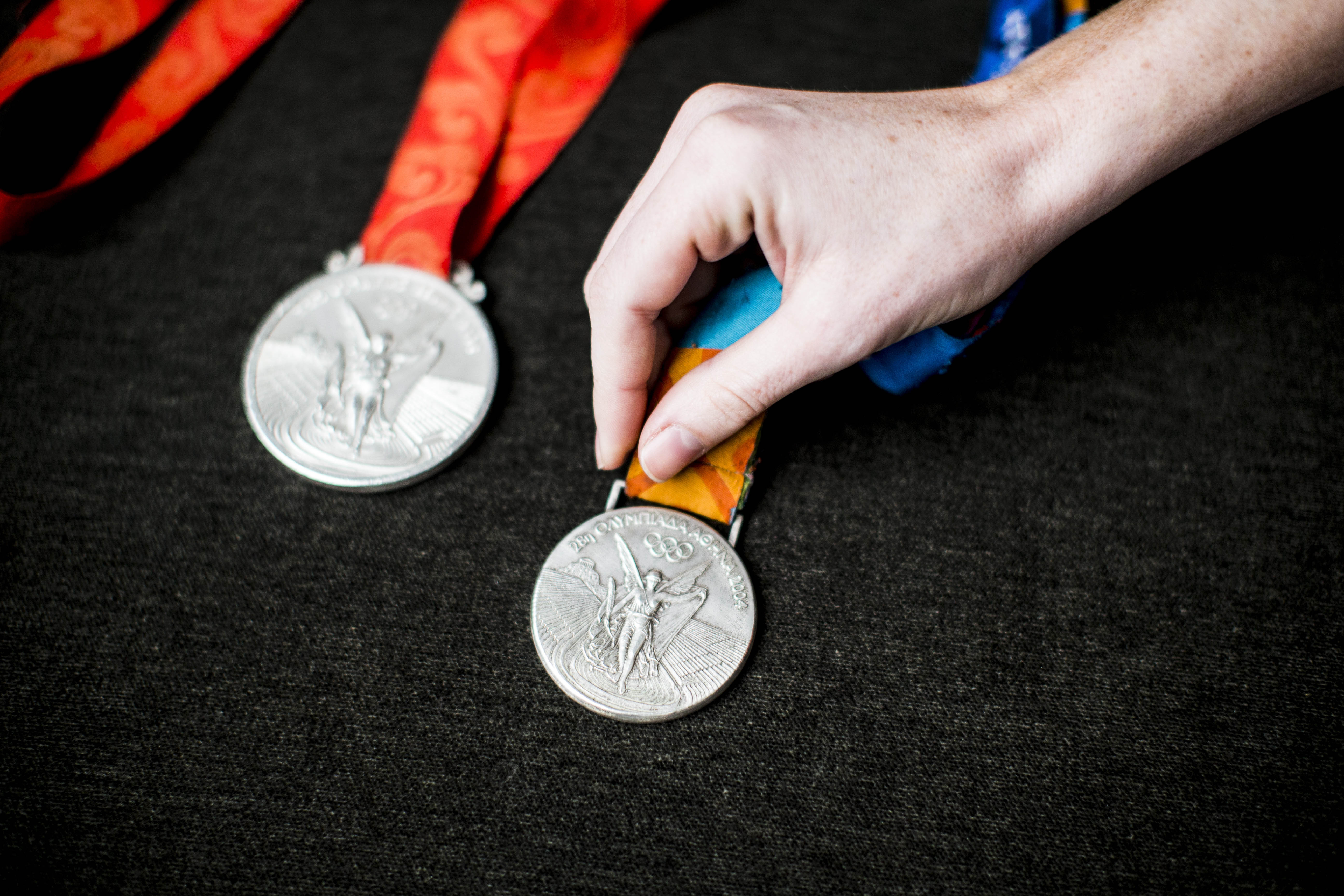 My thoughts were spiraling out of control in the ready room:

It was a mistake to move to California

Why wasn’t my old coach willing to make any changes or help me learn?

Maybe moving to Colorado was wrong, too.

I’ve made so many mistakes the past two years I don’t know if I can trust my judgement anymore.

All of these bad thoughts just swirled around in my head until I finally said to myself: O.K., stop. You’re about to swim this huge race. You need to be in the zone. Focus on the good, not the bad.

In that moment, everything changed. My entire life leading up to that point flashed before my eyes.

I’m seven years old, watching Summer Sanders swim at the 1992 Olympics in Barcelona on TV, turning to my mom and telling her that someday I was going to be an Olympic swimmer, too.

Then I’m in fourth grade, standing in front of my entire class, giving them a presentation on swimming and telling them that I was going to swim in the Olympics when I grew up.

I relived countless mornings, waking up 5 a.m., diving into an ice-cold pool, working on becoming the best swimmer I could be.

I saw my mom, my dad, my brothers, my friends, all smiling, cheering me on and supporting me no matter what.

All of those beautiful moments coalesced, and I swear — it was like the clouds parted above me, sunlight poured down and an angelic choir started to sing.

A huge smile spread across my face. I was at peace, more at peace than I’d ever been in my life.

All I had to do was swim the 50 free. That was it. I just had to swim one race, and then I’d welcome retirement with open arms. Eighteen national titles and four silver medals was a pretty damn good career. I owed it to that little girl — the one sitting in front of the TV watching Summer Sanders — to give it my best. Whatever happened after that, happened.

I remember the last three strokes of the race vividly.

When I touched the wall, I could see that my hand had made contact with it just a fraction of a second before the person next to me. She was Dara Torres, and she was 45.

As soon as I popped my head out of the water, I looked for my family. I ripped off my goggles and turned until I saw them. As it happened, they were in my line of sight to the clock. I couldn’t make out what it said, but I could definitely see my family. They were going crazy. My dad, my mom, my brothers and my aunts and uncles were jumping up and down, waving their arms in the air, hugging each other.

Are they excited because I won, or are they just being supportive because it’s over? Wait, what does that clock say? Is that a seven or a two? No, it can’t be a two, it’s gotta be a seven … unless….

It was a two. I had finished second.

The ready room could have broken me. Instead, it had given me the opportunity to find the inner peace I needed to win one more race and make the Olympics for the third and last time.