The first thing I noticed about John Wooden’s home was the overflowing pile of mail on his front porch. It was impossible to miss. There wasn’t even a traditional mailbox — instead, someone had carved a big hole out of the fence around his front porch so that all the mail he was getting could fit.

Letters and packages were everywhere. I’m talking rock-star amounts of fan mail — which kind of made sense. John Wooden was a rock star to me growing up. The Wizard of Westwood. The god of college hoops. One of the winningest coaches, in any sport, of all time. The man who practically invented the sports quote.

When I first visited Coach Wooden at his home in Encino, Calif., I sort of expected it would be like the legend himself: Larger than life. Maybe it’d have a full-size basketball court, a statue of Kareem and an Olympic swimming pool. Why not?

But the house was not as I had imagined. No basketball court. No pool. No statues. It almost didn’t feel real. It was just a one-bedroom condo on a residential block — not far from Coach Wooden’s favorite diner, where he would go almost every morning to drink coffee and chat with his neighbors.

Coach Wooden greeted my family and me at the door. The first thing I asked him about was the mail.

“Do you read every letter?” I asked.

“Eventually, yes,” he said, smiling. “But my homework’s piling up.” 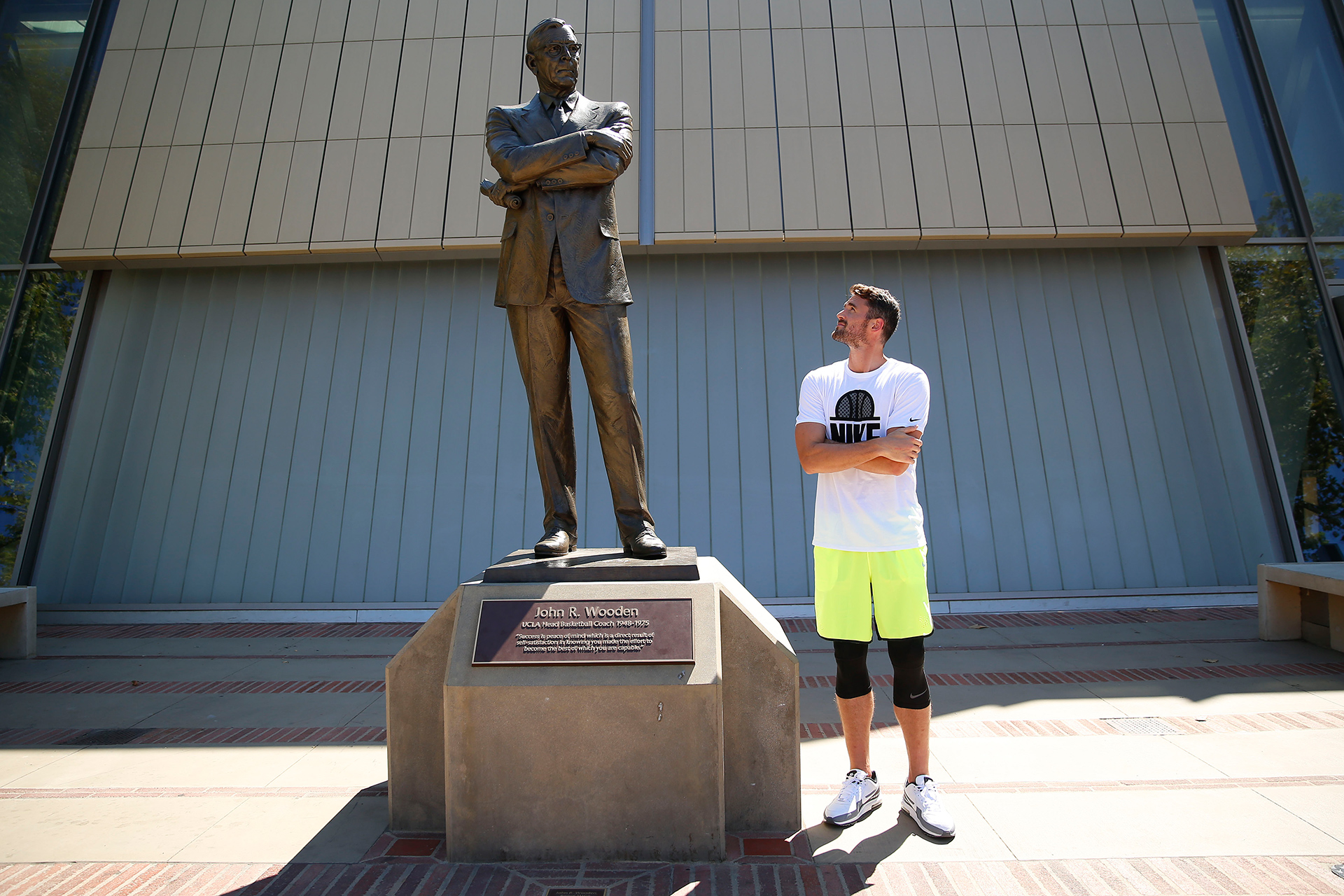 Walking into Coach Wooden’s living room was amazing. There was stuff everywhere. It wasn’t cluttered exactly, but it seemed like every inch of the floor and the wall was covered with some artifact from his life: UCLA jerseys, photos of Kareem and Bill Walton and other Bruin greats, bobbleheads and various trinkets, a Wheaties box, an American flag, trophies, stacks of video tapes, framed pictures of his late wife, Nell, and other family members.

And books. Lots and lots of books. The books that didn’t fit in his bookcases were stacked on the floor.

At one point, he picked one up. It was about the Civil War.

I told him it was one of my favorite subjects in high school. Out of nowhere he started reciting a speech by Abraham Lincoln — and not just a couple of words but a whole paragraph. I could only stare back.

Coach didn’t want to talk about basketball, or about himself. Instead, he wanted to know about my character, my friends, my family, and what interested me outside of sports. He asked me a hundred questions. I tried my best to have good answers. Coming off a good high school career, and with ambitions of making it to the NBA, I was a big fish in the small pond of Lake Oswego, Ore. But on that day I was the one who felt small. All I cared about was earning Coach Wooden’s respect.

He was so sharp. Coach Wooden may have been in his nineties, but he could still run circles around you with his wit and intellect. Here’s one example. My sister and I were sitting across from him on the couch in his living room. My sister was really shy, so she didn’t say a single word the whole time. Every few minutes during my conversation with him, Coach Wooden would pause and look over at my sister.

“What was that you said?” he’d say, pretending my sister had just asked a question. Of course, she hadn’t said a word.

Then he’d break out in a big smile and continue the conversation.

I think he liked keeping everyone on their toes. It was almost as though he was asking, C’mon now, can’t you keep up with me? 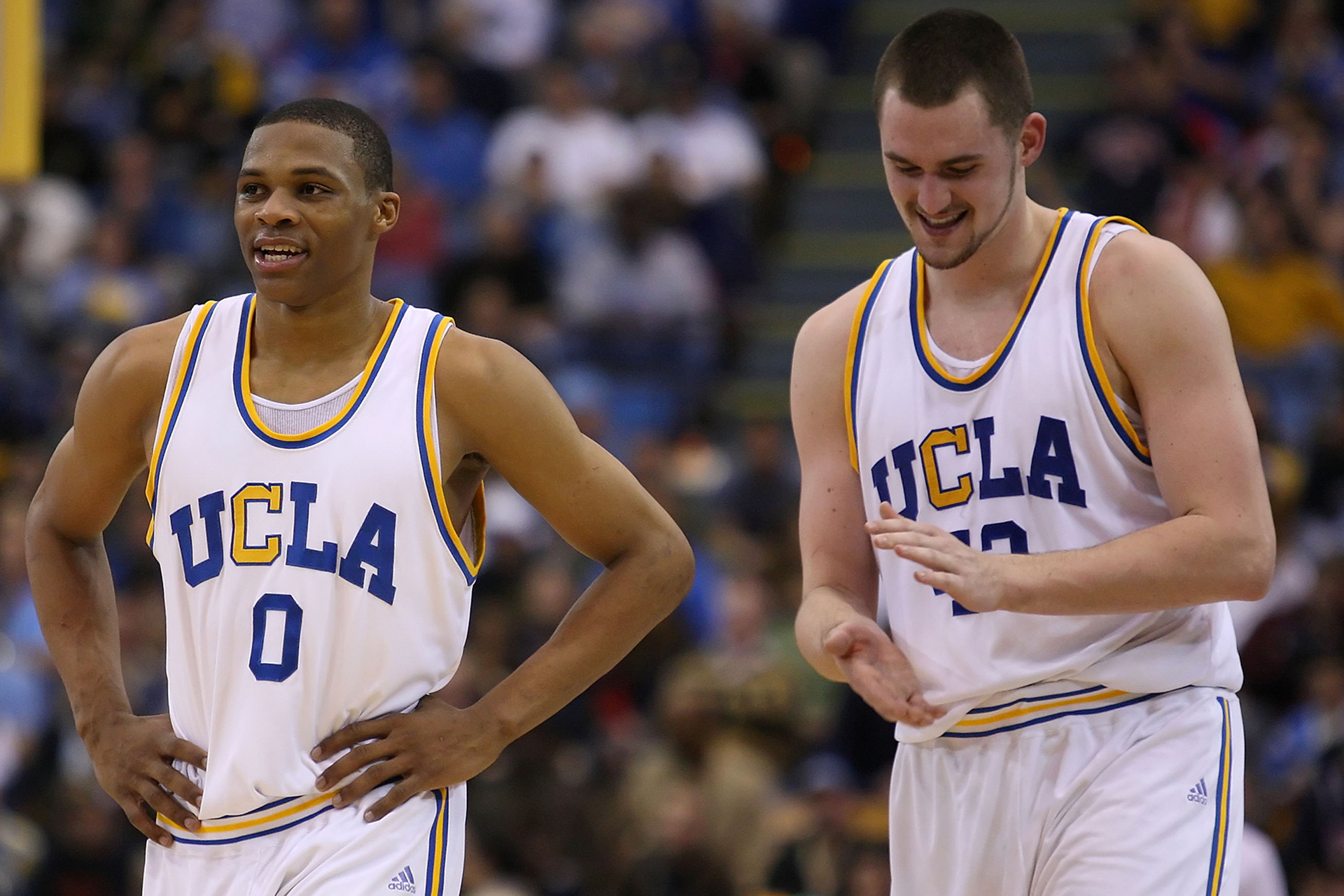 The first teammate I met after I got to campus was Russell Westbrook. I was on Bruin Walk. I was fresh out of high school and was rocking a new buzz-cut (the first haircut in years my mom hadn’t given me). All I knew then was basketball … which is another way of saying I didn’t have any style.

Russ, who was going into sophomore year, had both style and confidence … through the roof.

People were stopping to listen in to Russ digging into me. Russ always attracted a crowd, even then. He was smiling ear to ear. I could tell he didn’t necessarily mean it as a compliment.

Before I could say anything, Russ went on.

“Damn, how big are those Jordans?”

He was already testing me. I knew I was going to like this guy. 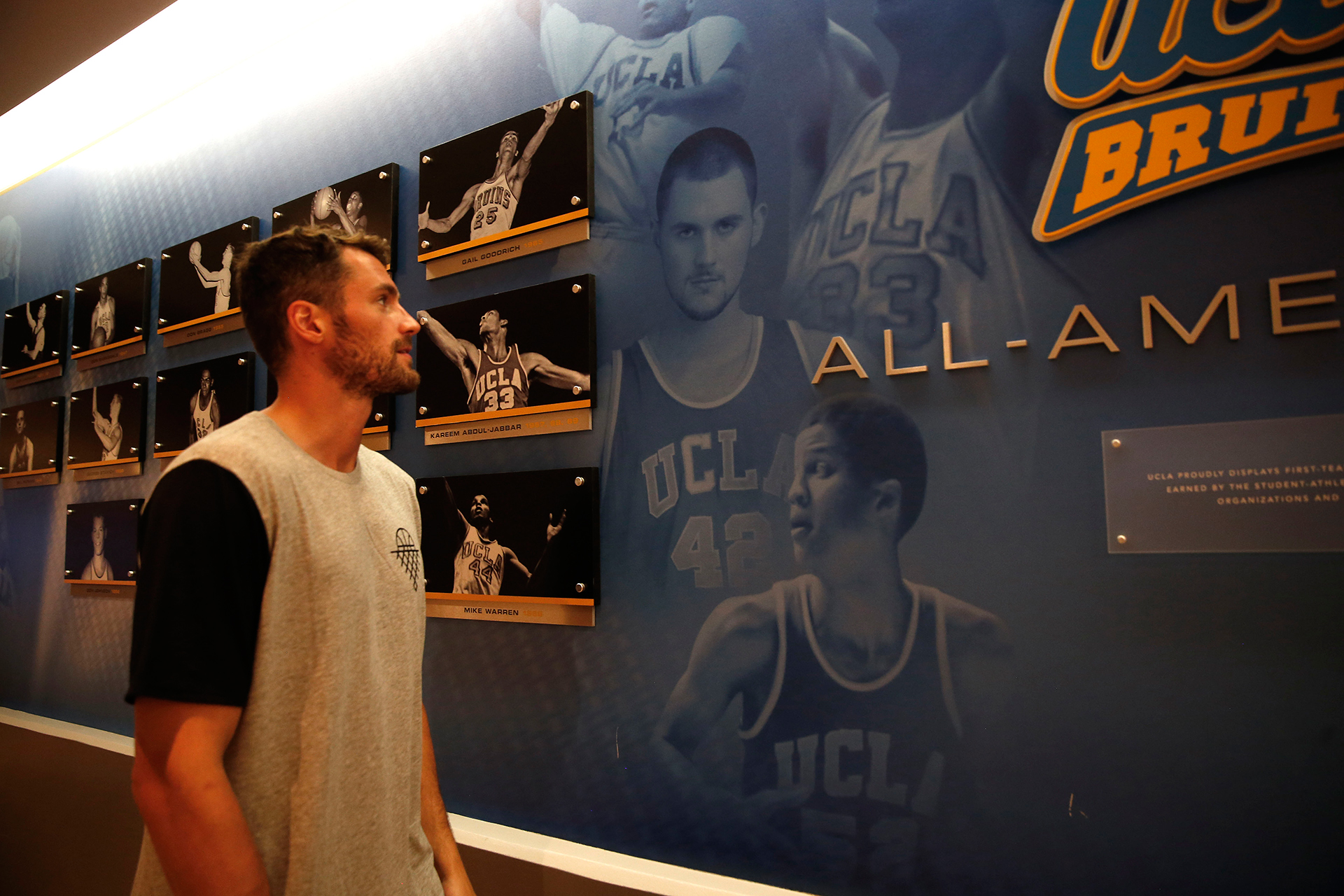 Russ and I ended up being roommates on the road. I think we had an immediate bond because we had common goals coming out of high school. We’d lie around our hotel room talking about making it to the NBA.

Sometimes Russ could be a stubborn roommate. We butted heads because we were competitive about everything. We competed at video games. We played hundreds of hands of a card game called “13.” (I still maintain that I’m up by one point.) We showed up to the gym early (he was somehow always there before me) to lift, study film and get in some extra shooting.

We were even competitive over the temperature of the room.

You know the Curb Your Enthusiasm episode where Vivica’s character is sick in bed and Larry keeps adjusting the thermostat? That was me and Russ.

I needed the room cold. Around 68 was perfect.

At night, Russ would jump up from bed and turn the dial way up — and then five minutes later I would sneak over and turn it back down.

One time I offered a compromise — “How ‘bout 71 degrees?”

See what I mean? Dude is stubborn.

Over time, I got to see another side of Russ, too. Like the first time he talked to me about a girl named Nina. She was on the women’s basketball team. He would go on and on about her.

Just last summer, I got to see Russ and Nina get married. That just about sums our Bruins team up. All these years later, we’re like family. 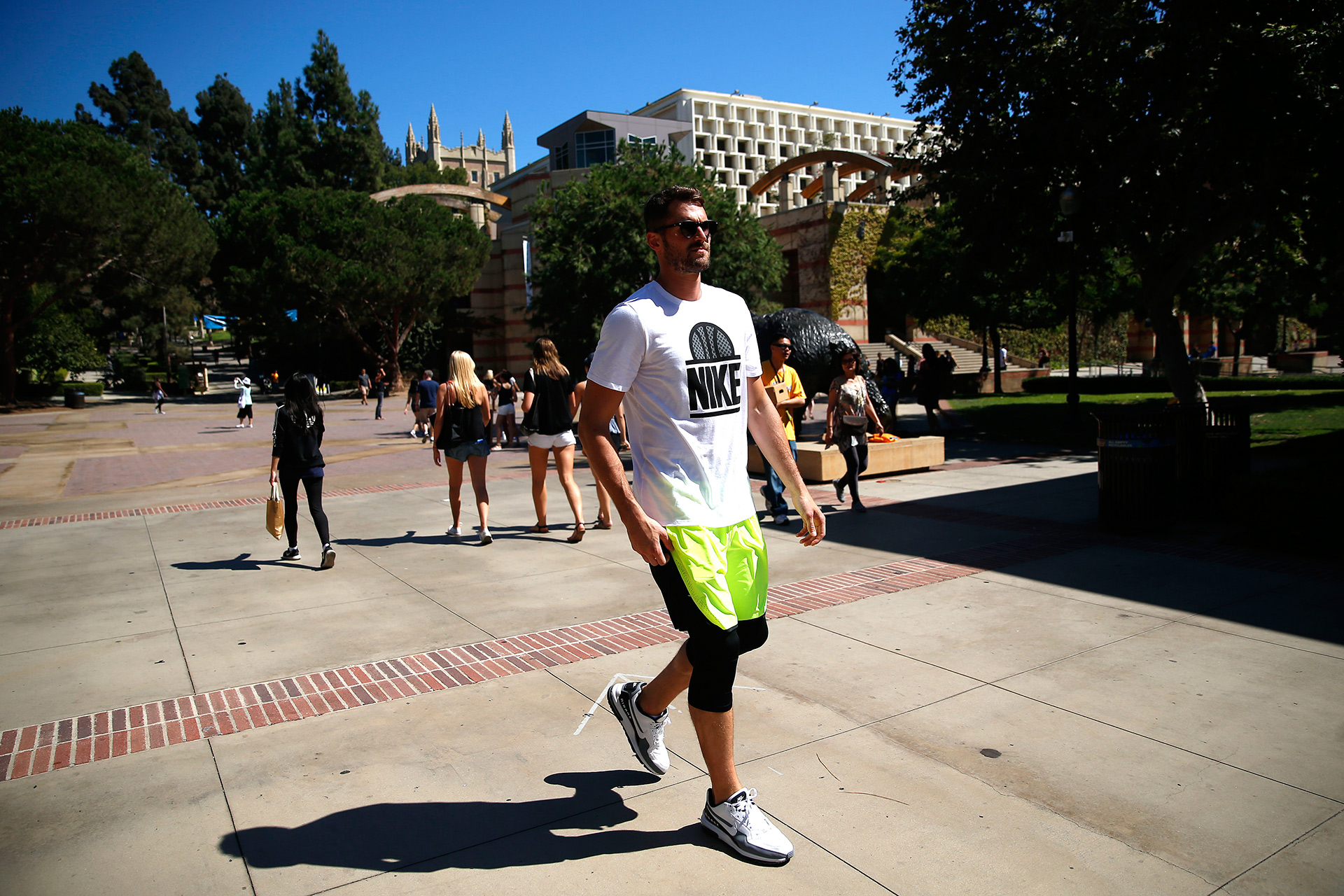 After my visit to Westwood as a 17-year-old, I received one of Coach Wooden’s books, Wooden: A Lifetime of Observations and Reflections On and Off the Court, as a gift. I carried that blue book around in my backpack all through my junior year of high school, looking through it every once in awhile.

But I still hadn’t made my final decision about college. North Carolina, in particular, said it was really interested in me.

I remember the trip from Oregon to Charlotte on a visit to Chapel Hill. During the flight, I pulled out Coach Wooden’s book and read parts of it once again. It would be probably be many kids’ lifelong dream to meet Roy Williams and visit the campus Michael Jordan made famous.

But before I landed, my choice was already made. 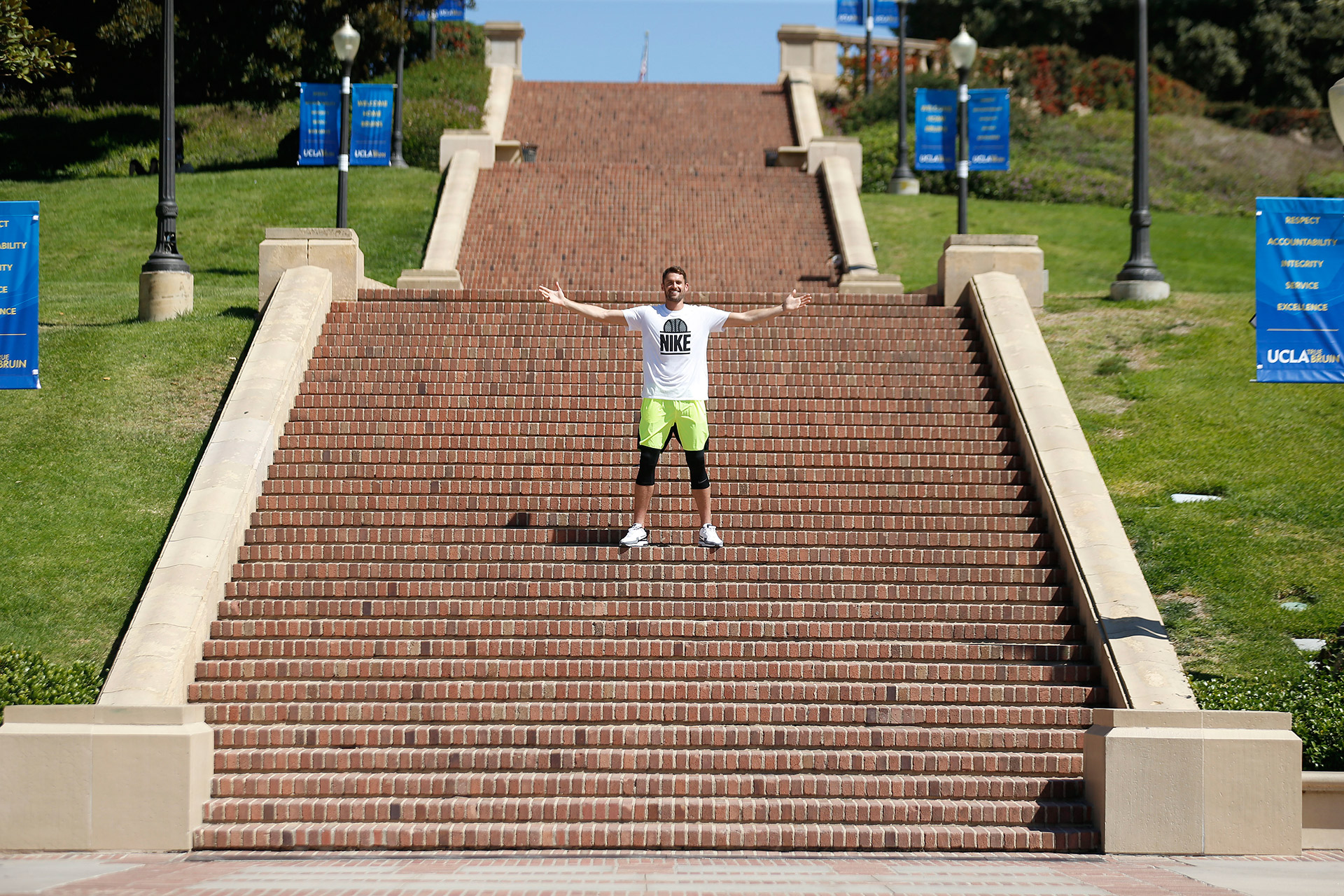 When I think back about my year at UCLA, I remember it as one of the best years of my life. Even though it came and went fast, it was full of great memories on the court. Josh Shipp’s impossible shot against Cal. Darren Collison’s heroics in the second round of NCAA tournament, when he dug us out of a hole in our comeback win over Texas A&M. Luc Richard Mbah a Moute’s three-point winner against Maryland in Kansas City. Russ’s courageous performance against a really strong Memphis team in the Final Four.

We didn’t win a national championship like we wanted to, but what has turned out to be more meaningful to me are the relationships we formed. We were like family, that team. For almost every single person on that team, we could meet up in 20 years and be right on the same page.

UCLA will always be my home. That’s why I’ve decided I want to give back for everything I’ve received. It only made sense to give back to the place that helped shape my basketball career. So this year I am donating to the construction of the Mo Ostin Basketball Center — specifically to the new strength and conditioning center within the facility, which I’m excited will be named The Kevin Love Strength and Conditioning Center.

I want to help give something back for all the kids who will someday go to UCLA. I want them to find out, like I did, how special it is.