The Name on the Back

At first, when Jauan came down with that ball in the end zone and the referee signaled touchdown, I just kind of froze.

I remember seeing everyone rushing the field — people jumping up and down, guys sprinting every which way, Coach Jones dropping to one knee after a few awkward leaps.

But if you watch the tape, in the midst of all that mayhem and excitement, there were a couple people left on the Tennessee sideline. And I was one of those people.

I didn’t plan it out or anything. I just couldn’t believe what had happened, and something was holding me back.

I needed a little time.

So I just stood there. In shock. 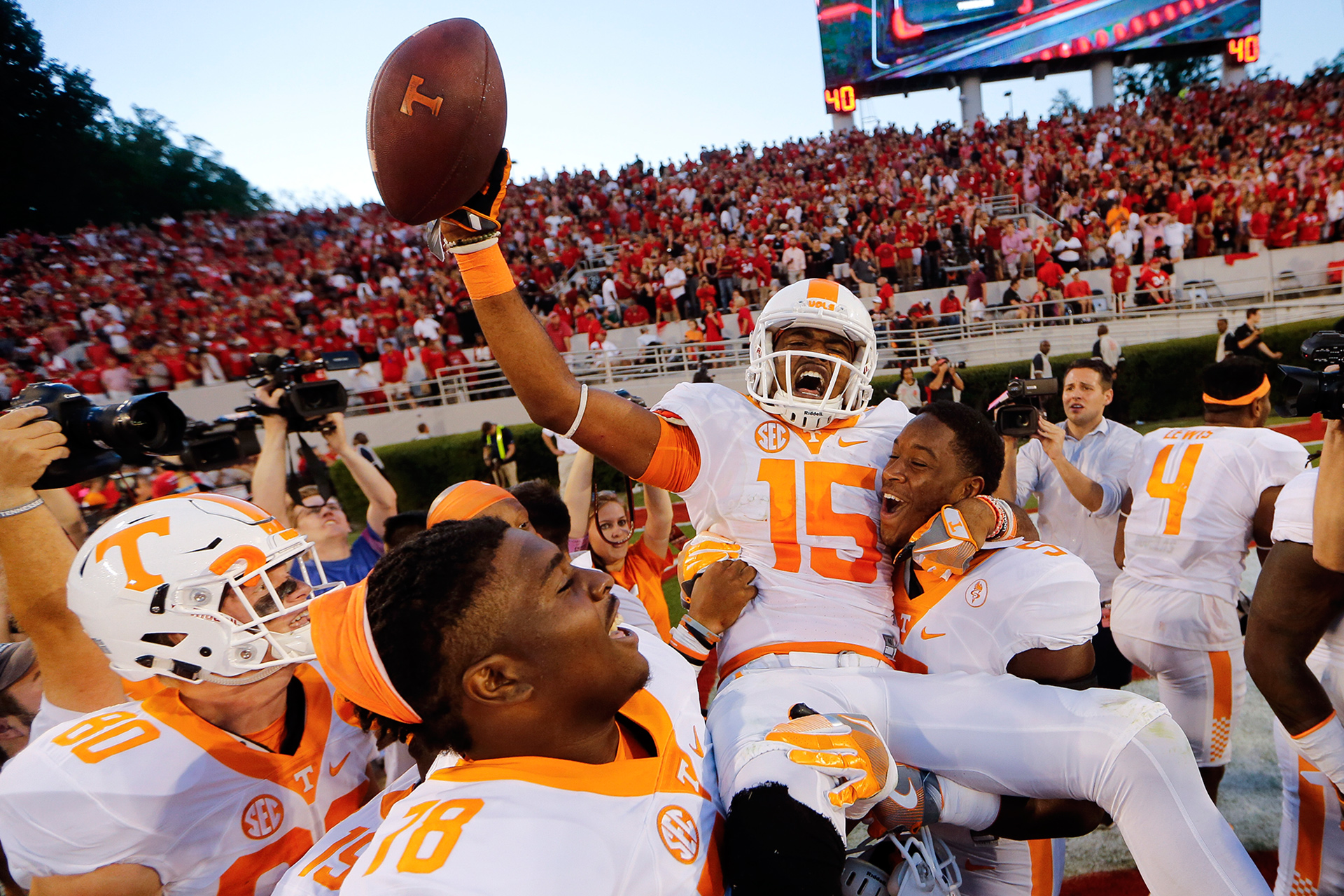 It wasn’t long — maybe four or five seconds — but I wanted to take it all in for a few moments. Then, right before I ran onto the field to celebrate our miraculous win over Georgia with my teammates, I took a deep breath and thought about my dad.

It’s something I’ve done every day since he passed away in March after a long battle with colon cancer. And he always comes to mind in moments of intense joy like the one I experienced this past Saturday in Athens.

I couldn’t help but think about how happy that game would’ve made him.

I grew up in Atlanta. My father’s side of the family is from Birmingham, Alabama, and my mother’s side is from Charleston, South Carolina. My family has deep roots in the Southeast. And in that part of the country, especially in early October, SEC football is all anyone talks about. The Georgia alumni base there is massive — red and black is everywhere, sports bars are packed on Saturday afternoons — and those folks love to talk about their team.

So this one would’ve been big for Dad. It would’ve given him bragging rights … for years.

I mean, imagine it: Your son just helped the University of Tennessee defeat the Georgia Bulldogs on their home turf, to remain undefeated, and was an important part of one of the greatest, most exciting college football games in years. 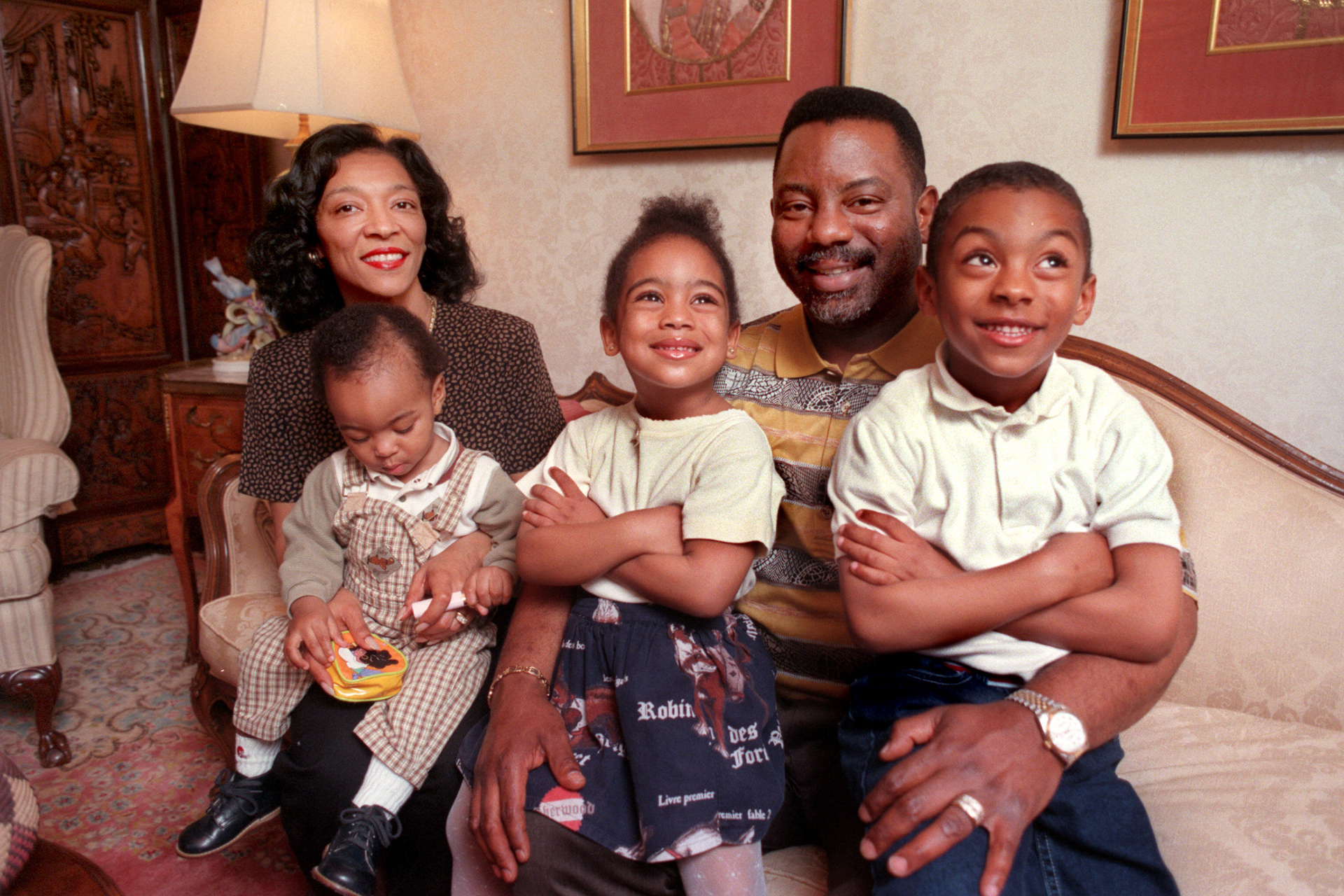 More than anything, Dad would’ve been proud of me. And he would’ve let me know.

I can guarantee you my father would’ve been decked out in all-orange everywhere he went that next morning — the grocery store, running errands, at the park, everywhere. People would’ve been blinded by all that orange.

So, yeah, Pops would’ve been in his element after that win. He would’ve loved it.

But, more than anything, he would’ve been proud of me.

I’m certain of that.

And he would’ve let me know. That was one thing you could always count on with my dad. He told me he was proud of me every time he saw me or spoke with me on the phone. He’d tell me that multiple times a day, without fail.

Sometimes he’d just look at me, smile and, out of nowhere, say, “I’m so proud of you, Micah.”

I learned so much from my father over the years, but the main thing he taught me, above all else, was to be a good man.

Growing up, I wanted to be just like my dad — and I tried to be like him every day, in every way. There were things he would help me out with, small pieces of advice or insights that he’d pass along, but, really, it always came back to that main one.

Be a good man.

And when you’re an Abernathy, that mandate carries a little more weight.

That name — Abernathy — it means something.

And that was made clear to me from a very young age.

When my dad was passionate about something, he loved to talk about it. So in addition to all the lessons he taught me growing up, Dad spoke with me often about history, and about my family’s place in it.

He told me what it was like for him to grow up in the South during the ’60s. And over the years he spent hours and hours talking with me, my brother and my sister about how his father — my grandfather — helped to change the world. 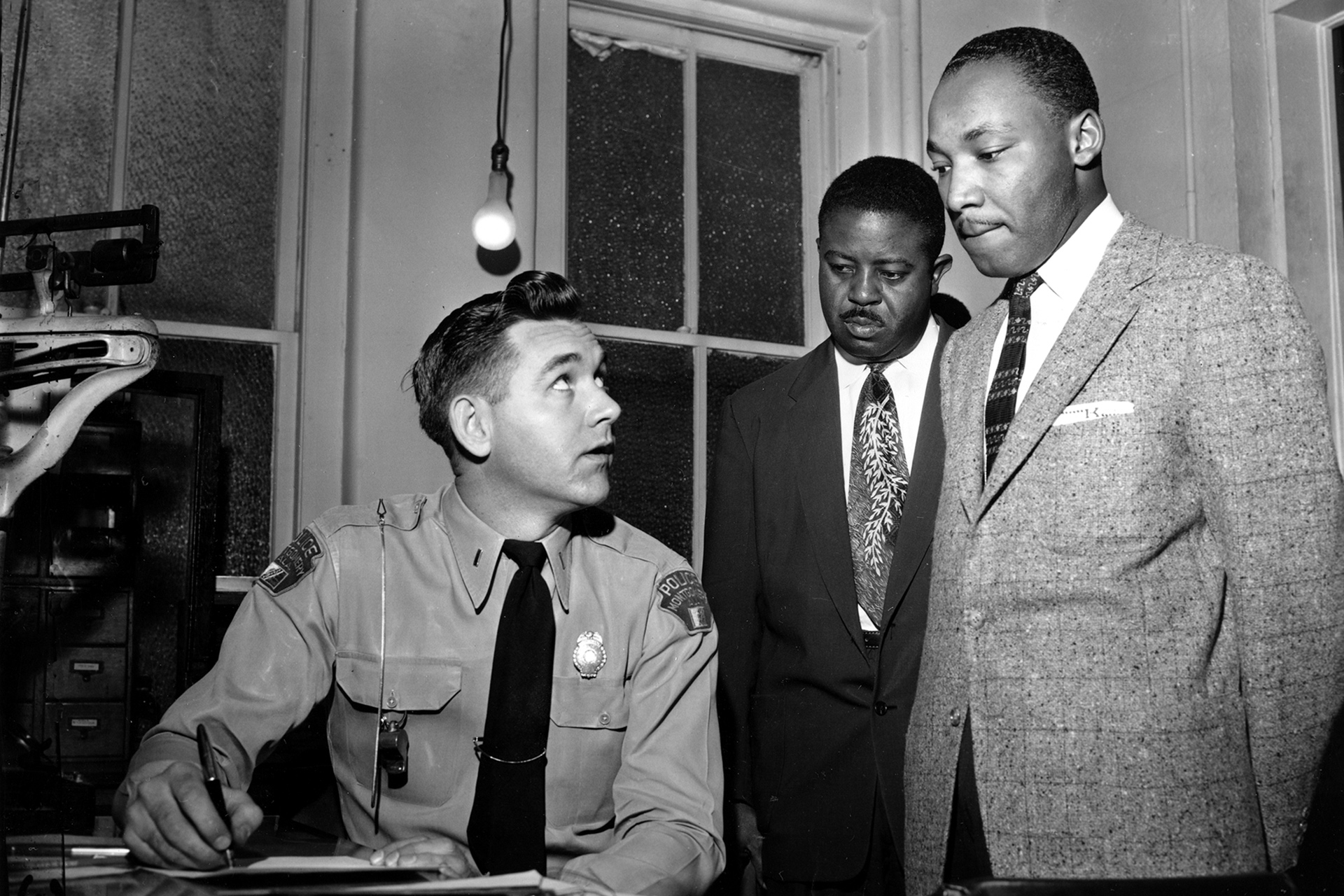 My grandfather, Ralph David Abernathy Sr., was Dr. Martin Luther King’s best friend and his closest advisor — he was with Uncle Martin in Memphis on April 4, 1968, and he held Dr. King in his arms after the shooting that took his life.

More than a decade earlier, my grandfather had helped organize the Montgomery bus boycott and worked to create the Southern Christian Leadership Conference. During the civil rights era, my grandfather would travel with Dr. King everywhere, and most of the time my grandmother was right alongside them, on the front lines — marching, protesting, seeking change. It was their life, their mission, and they made a huge impact on American society.

After Dr. King died, my grandfather took on an even greater leadership role in the civil rights movement and also became president of the SCLC.

Even though my dad was a young boy at the time, he was a part of it all. He was old enough to participate in a lot of the marches. He actually got taken to jail when he was six or seven because he had been marching with his parents, and everyone involved was gathered up and arrested.

In talking with us, my father would always tell my brother, my sister and me how dangerous it was back then. My grandfather’s house was firebombed, and my grandfather suffered numerous beatings when police cracked down on peaceful protests. It wasn’t uncommon for him to receive death threats.

When my dad shared stories from back in the day, he would often tell me how glad he was that his kids didn’t have to grow up during those times or experience those atrocities. But he also made sure I understood that my grandfather had been one of the people who made that so — that he was someone who gave his all, every day, to help bring about positive change. 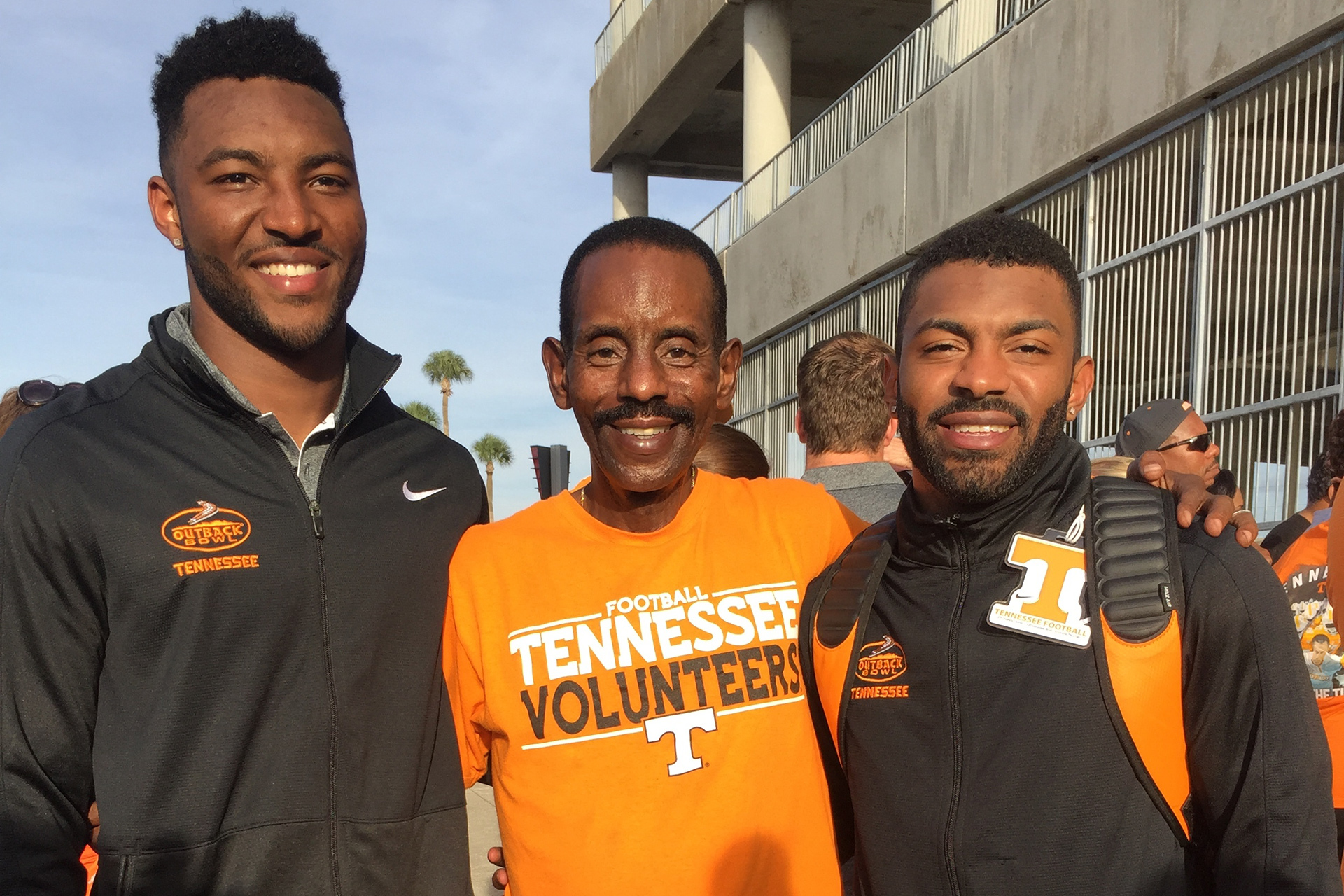 Building on that legacy, my dad worked tirelessly on behalf of civil rights and human-rights causes during his lifetime, all the while instilling in me an understanding that I have a responsibility to the Abernathy name.

That will always stick with me.

Who I am, and my family’s history, and what it all means is definitely in my head every day of my life. And it’s not just about my father and my grandfather, either. It’s about my whole family. I represent my entire family every single day — my mother, my grandmother, my brother and sister, my aunts and uncles, my cousins, everybody who holds our last name. Everything I do, I do with them in mind.

And because I’m an Abernathy, I’m not looking to just get by. Within my immediate family, we call ourselves “The A-Team,” and I want to make my mark.

I want to do the Abernathy name proud.

For the moment at least, that means being a leader on the Tennessee football team and giving my all to help us continue what has already been an amazing season.

That big win over Georgia was incredible, no doubt. I mean, I’m 2–0 against the Bulldogs now in my career at Tennessee, and of course it feels good to beat the home team from where I grew up. But as a team, we have so much more work to do. We go to College Station on Saturday to play Texas A&M in what is another really big game for us. Then it’s Alabama in Knoxville the following week. So it doesn’t get any easier.

But we wouldn’t have it any other way. We all came to Tennessee to play in games like those. We live for them.

And going forward, one thing is for sure: Our team knows how to battle. Whenever we face adversity during the remainder of the season, no one is going to panic, because we’ve already come from behind in so many games.

This year’s team is special in that way. I’ve sensed that from Day One. We weren’t satisfied with nine wins last season, and we’ve been more relentless this year in everything we do. We’re much tougher than we were last year, and it’s shown in all those comeback wins. 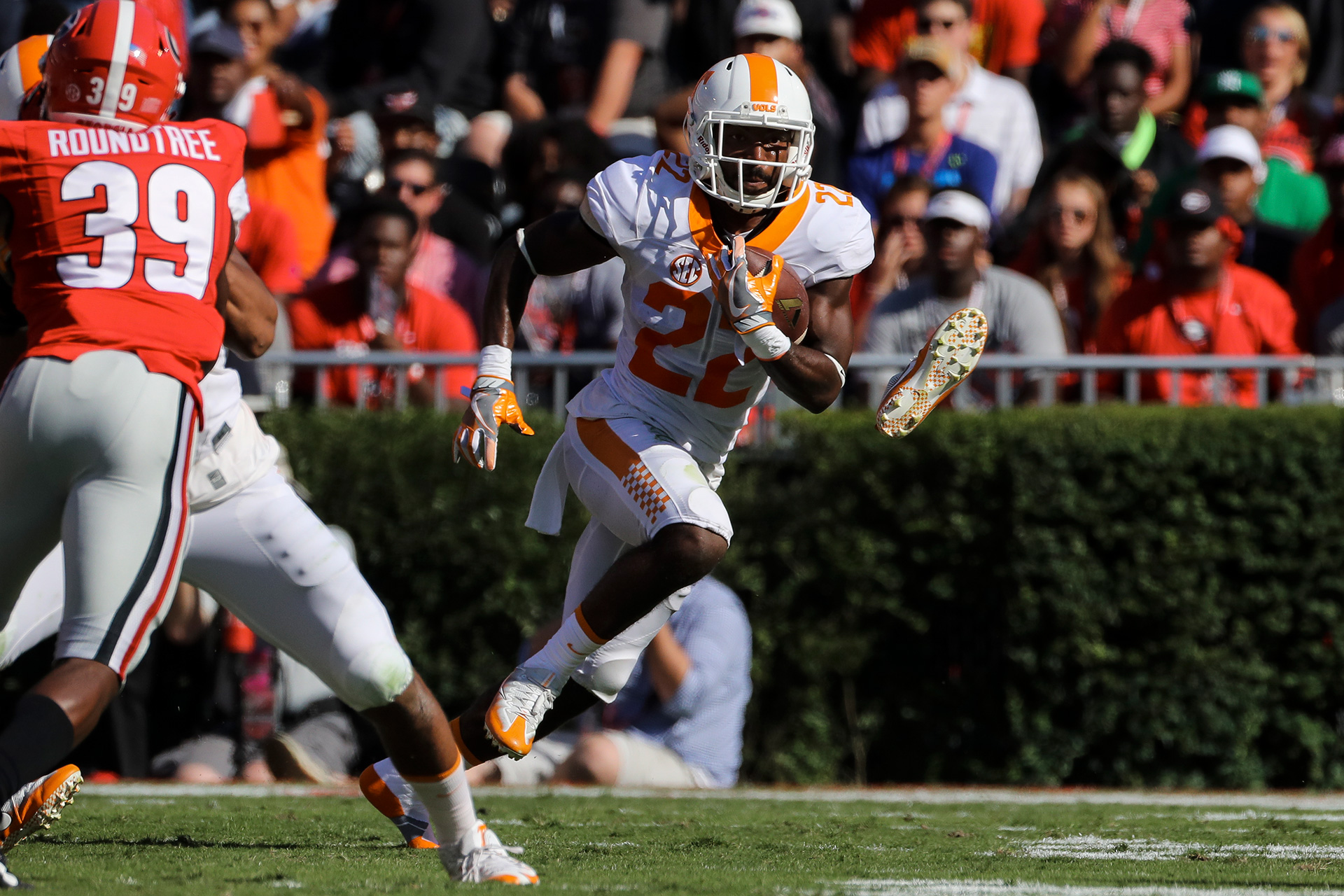 So, the rest of the season is going to be a lot of fun. I mean, everything’s there for the taking, and if we keep this up we could make our own history. Just be sure not to look away for a second, or else you might miss something even more unbelievable than that ending we put together against UGA.

Of course I would want my dad to be here right now – but I know he’s watching over me.

And I know this much, too: If we play well against A&M and are fortunate enough to come home with a win, I have a pretty good idea of how my dad would’ve responded if he were still around, and it makes me smile just thinking about it.

Sunday morning, you better believe that he would’ve found a way to be wearing a Tennessee jersey with my name — our name, the Abernathy name — on the back.

He’d wear that jersey everywhere he went — to the grocery store, running errands, at the park, everywhere. And he would make sure people saw that name on the back….

He’d point to it, and smirk, and then he would tell every person he met about his son Micah, who has made him the proudest dad on the face of the earth.