The Olympic tennis tournament is a grind. To get gold, you have to win six matches in seven days.

I wanted to win a gold medal — not just because of what it would mean for me, but also for my country. Puerto Rico has never won a gold medal before in any Olympic sport.

I went into Rio with some confidence. I got off to a good start once play began, and with each victory, I grew more and more positive that I had a good shot at not only medaling, but winning the first gold in Puerto Rico’s history. I defeated Garbiñe Muguruza and Petra Kvitová, two women who have won Grand Slam titles, on my way to the final. Then, in the gold medal match, I faced Angelique Kerber, the #2 player in the world and the 2016 Australian Open champion.

Just making it to the final meant so much because last year was really discouraging. At one point, I had lost in the first round of 12 straight tournaments. I really began to doubt myself. I began to wonder if I even belonged at this level. I was lucky to have my family and my team supporting me and not letting me lose hope.

I felt kind of lost. I knew that I was in shape physically, but I had such low confidence, that I wasn’t mentally strong enough to win. I couldn’t believe I wasn’t having success. Things began to turn around when I hired a new coach, Juan Todero. We focused a lot on my mental approach, putting an emphasis on being in a positive place when I played. In Brazil, I approached each match with the confidence that I could win. And it worked.

In the final, Kerber would my biggest challenge yet. I had faced her twice before and had lost both times. 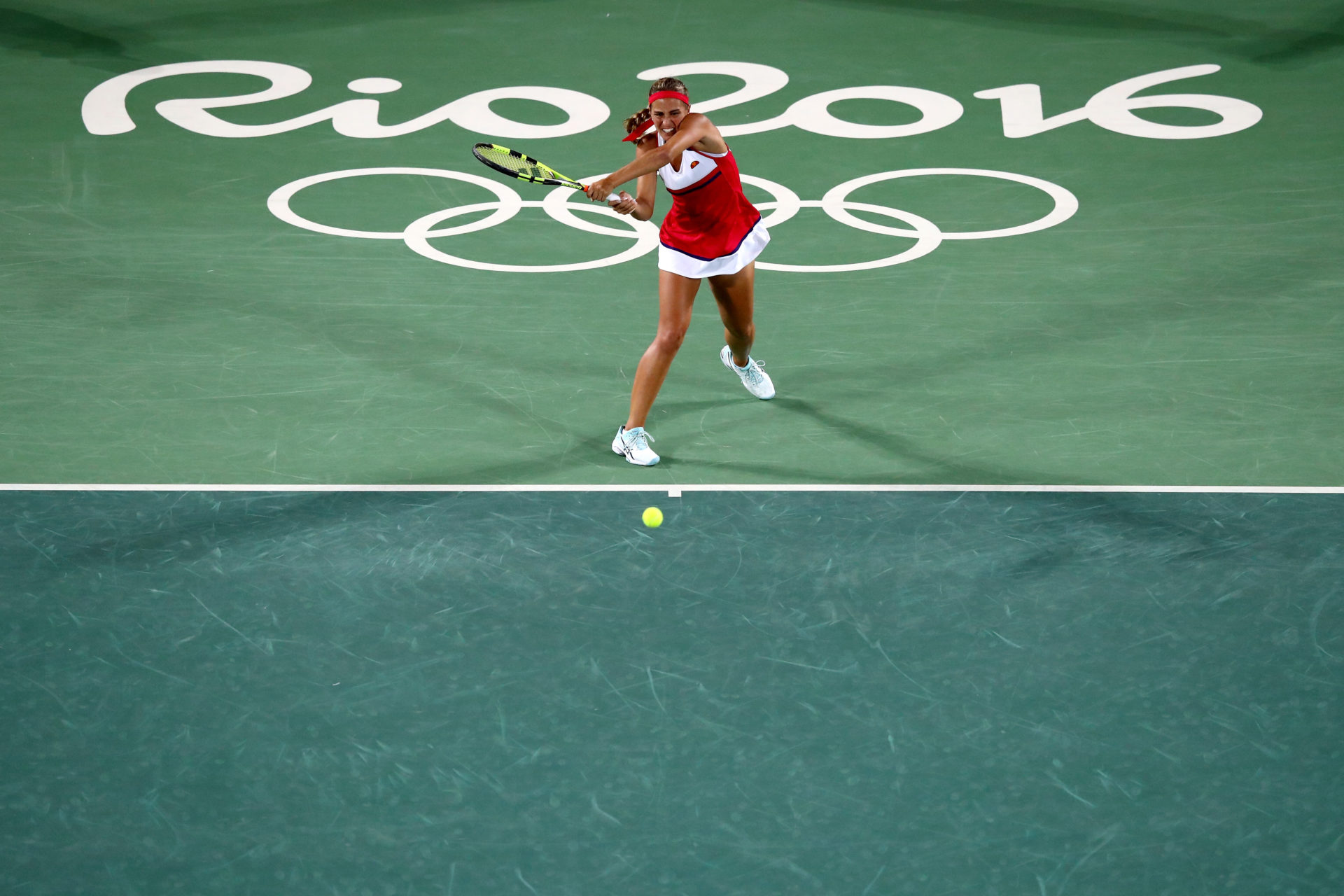 The entire day leading up to the gold medal match, I was trying to be as relaxed as possible. I told myself to enjoy this moment because sometimes, we can get so caught up in the final result that we lose sight of the amazing things surrounding us. I knew this would be a memory I would cherish forever.

When I won the first set, I knew I was in the driver’s seat. In tennis, nothing is set in stone — people have obviously come back from behind to win in three sets. I was playing really aggressively, and Kerber wasn’t prepared for it. My high-pressure approach put her on her heels to start, but it worked against me in the second set, when I got too aggressive and lost 4–6. I had to regroup super quickly. The new mental approach I had been working on with Juan came in handy there.

I knew that I had a great chance to win gold. I lost the second, but I came out blazing in the third. I was executing everything. After that, I ran away with it. It actually happened. I surprised even myself with the poise and composure I had been able to maintain throughout the tournament. The crowd was behind me in Rio, chanting “Sí, se puede!” and I fed off of that. Suddenly, my dream came true.

Something I’ll never forget is the moment that I realized that I had won. I’m jumping around, I’m looking at my teammates and my parents and thinking, We did it. I flash back to all the dreams I’d had about this moment — a moment that was a complete 180 from where I was at the same time last year —  and I’m looking at my coach and my parents and everybody is crying and hugging. We did it.

That’s the million-dollar shot right there. 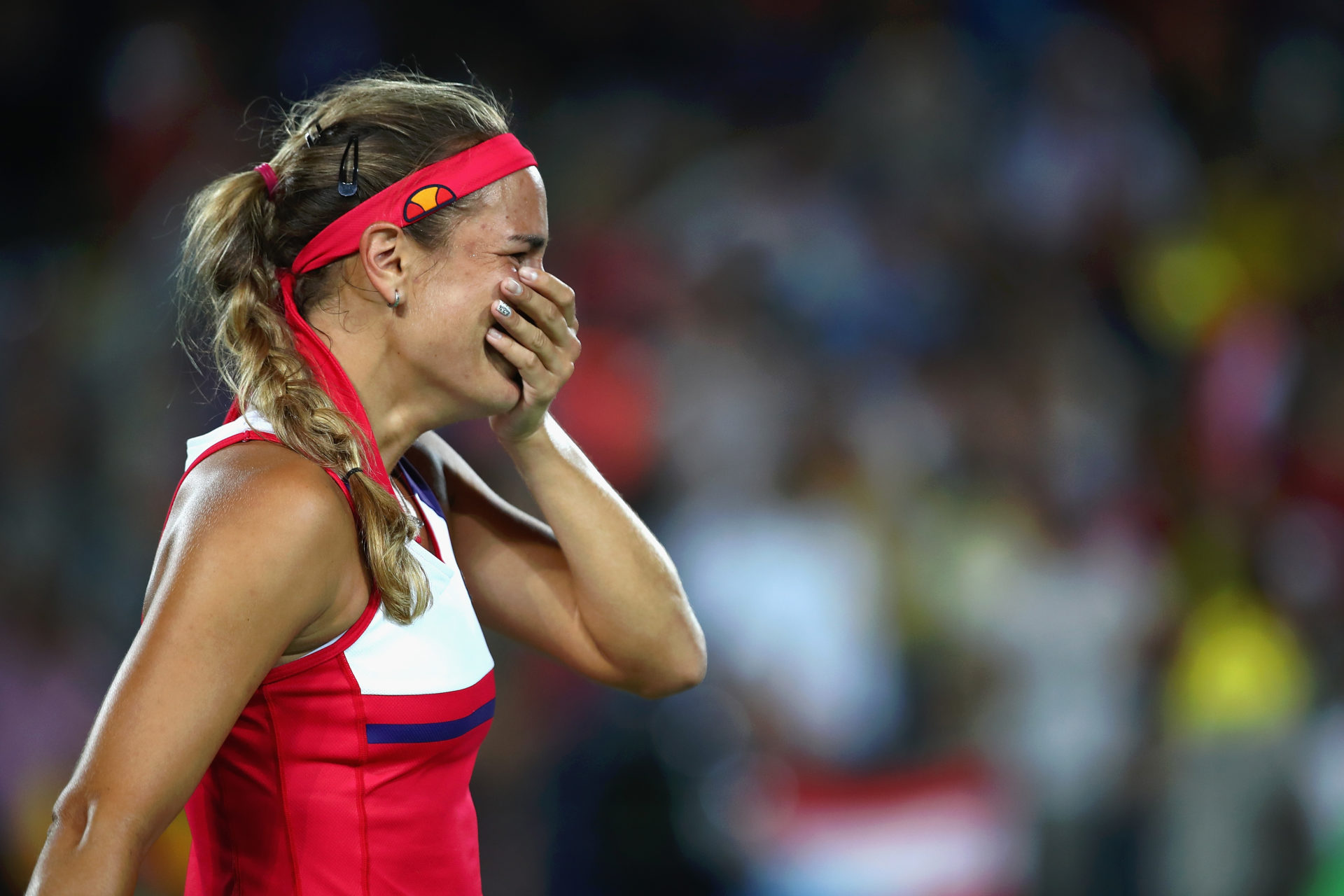 Winning the gold medal for Puerto Rico — the first Olympic gold in the country’s history — was the most rewarding moment of my life. But I didn’t even begin to realize how meaningful that moment was until I stepped onto the tarmac at the airport in San Juan.

Ten thousand people were there. Waiting for me.

The feeling of happiness that filled me is indescribable. It was the most amazing moment, to see so many of my countrymen. As soon as I got off the plane, I was greeted by the governor of Puerto Rico, Alejandro García Padilla. A tiny press conference took place. The whole time, though, I was watching all the people who were lining the streets, who were getting out of their cars or who were running across the street to greet me and wave.

It was a moment I could live inside forever. There were so many people there to support me. To see that I’m setting a good example, well, it was validation for all the hard work I’ve put in over the past year, and proof that I’m doing things the right way.  It was one of those moments that you dream about, and you get so fixated on the fantasy that you get goosebumps just imagining it — believe me, when that I won the gold medal, the same goosebumps came right back.

And this was all before the parade started. 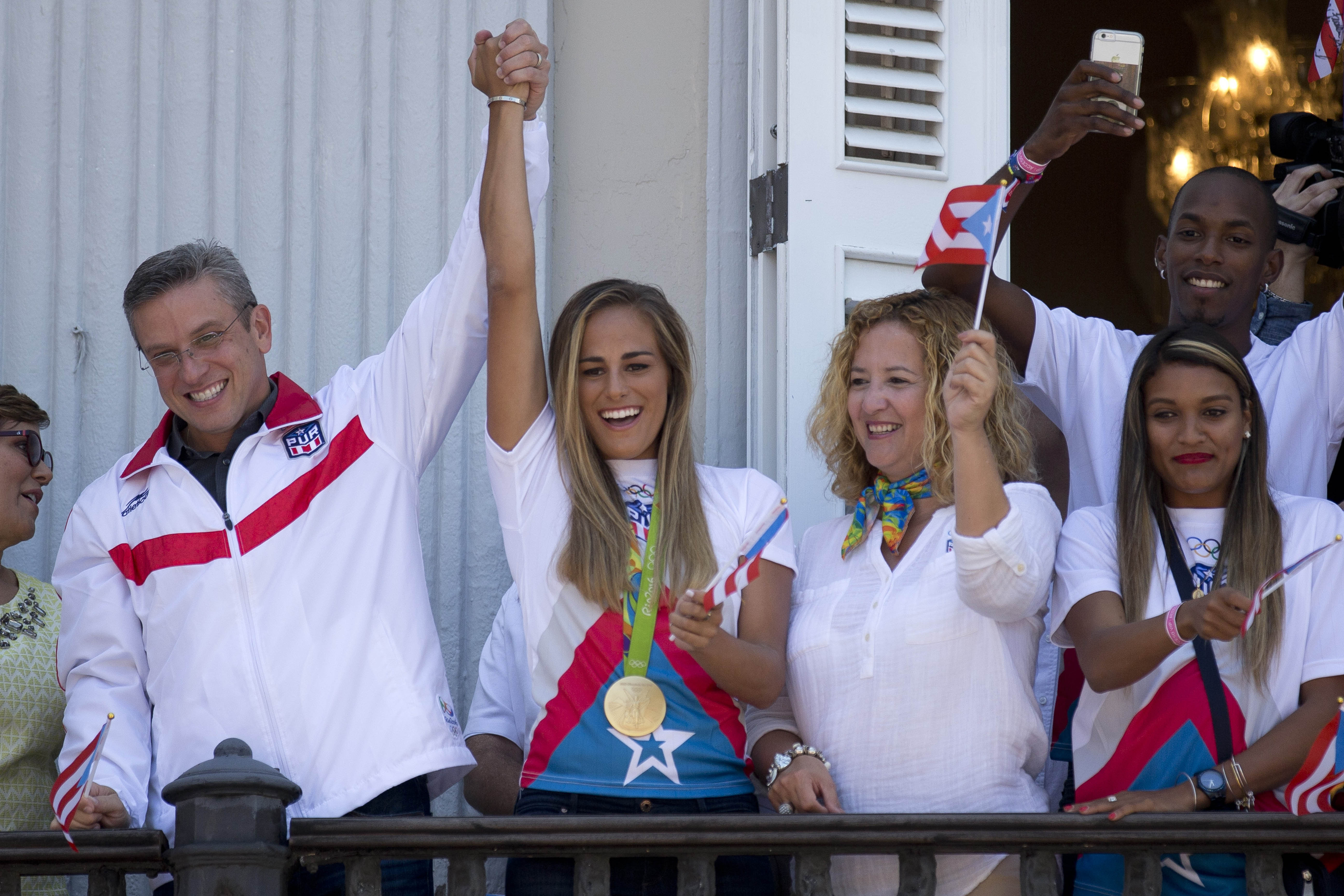 I know how this is going to sound, but nobody tells you how heavy the medal is. It’s really heavy!

I only stayed for one day after my event ended — and I spent most of it doing a lot of press. But instead of doing interviews in a hotel or in a cramped media room, I did them on a balcony overlooking Copacabana Beach. I was watching the water — the beach is some of the most beautiful scenery I have ever seen — and I realized that, because of the medal, my neck was starting to get sore. It was the best feeling in the world.

When I came to back to Puerto Rico, it was amazing to see how many people were behind me. Just the fact that the people of Puerto Rico stopped everything to watch and support me, that they followed me throughout the whole experience. It was incredible. Winning the first gold medal in Puerto Rico’s history is an immense honor. I’m so proud that I was able to give something back to my home.

Seeing the reaction of how everyone enjoyed that final, and enjoyed that moment when I won, it was completely priceless. I’m so glad I was able to give them that moment of hope, peace and excitement.

The Olympics were made to be my stage. Don’t believe me? A few days before I came to Rio, I got a puppy — a “pomsky,” a Pomeranian/husky mix. I named her Rio. Incredible coincidence, right? 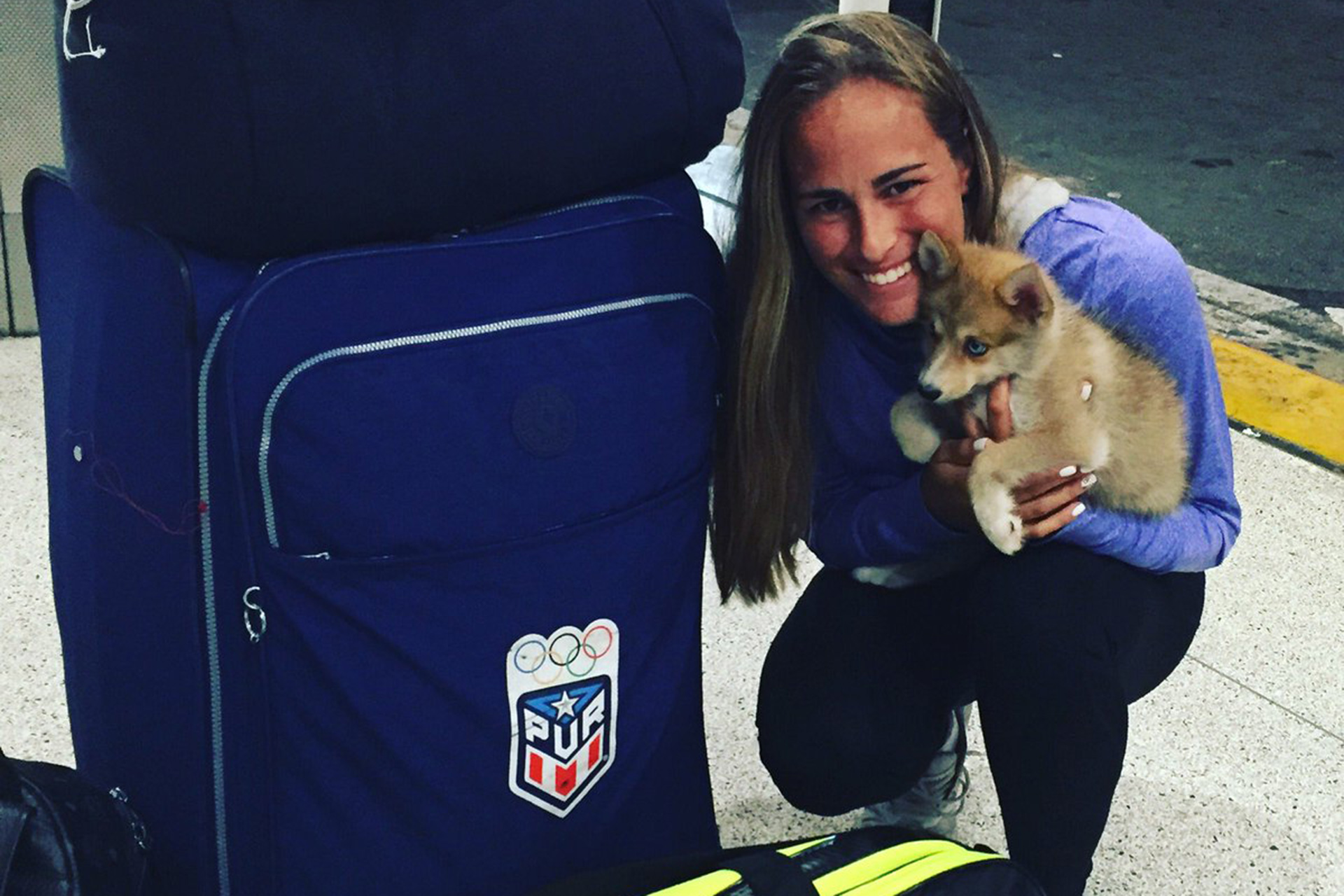 Now that I’ve shown that I can win a tournament of this caliber, a lot of people are going to be looking for reasons why that was a fluke or why I’m not meant to be here. They’re going to say I was a surprise. But I’m so much more than that. I want to show everybody that I’m here to stay.

But I’m here with a refined approach. I’m not going to put any excess pressure on myself to win every single tournament. One thing I’ve learned is that I cannot be impatient with any kind of result, because when it’s meant for you, it’s meant for you. The Olympics was definitely meant for me.

My gold medal is not a fluke. I worked really hard to get here. The tears that I cried when I won, it was because I worked my butt off to get to that position.

I’m excited to see where my sore neck goes from here.