When I was a kid, I didn’t talk much. Actually, I didn’t talk at all. I feel like I said 10 words before I turned 10. I don’t really like speaking unless I have something to say or I’m spoken to. Two ears. One mouth. That’s how that works.

Though I was quiet as a kid, I was a good teammate and showed an early aptitude for sports. I played up with older kids my whole life, and a lot of the time I was the best one out there.

The funny thing is, I didn’t like football much at first.

I’m from a small town in California called Imperial, and in our Pop Warner league there was a weight limit. I grew big, and fast — I was bigger than all the other kids in my grade — so I wasn’t allowed to play the skill positions. My mom wasn’t into that, to protect me. Football became an afterthought. So I started playing baseball, and I enjoyed that a lot. But then I broke my wrist in eighth grade. As I approached high school, I decided that I wanted to play football again.

Now, my mom is an extremely educated person — she works as a researcher and has worked as a professor and a teacher in the past. She’s protective. She’s skeptical. While my dad has a military background — he’s in the Army Reserve — he’s more of a laid-back, charming guy from Louisiana, so he really wasn’t forcing the issue. He’s the total opposite of a hardass. It was my mom who was the hardass. They supported my desire to play football, hauling me to camps all over to get me exposure, but she was always asking questions. She used to tell me that if I got a football scholarship, she’d instead make me enroll at the community college where she was working, just so she could hover over me. 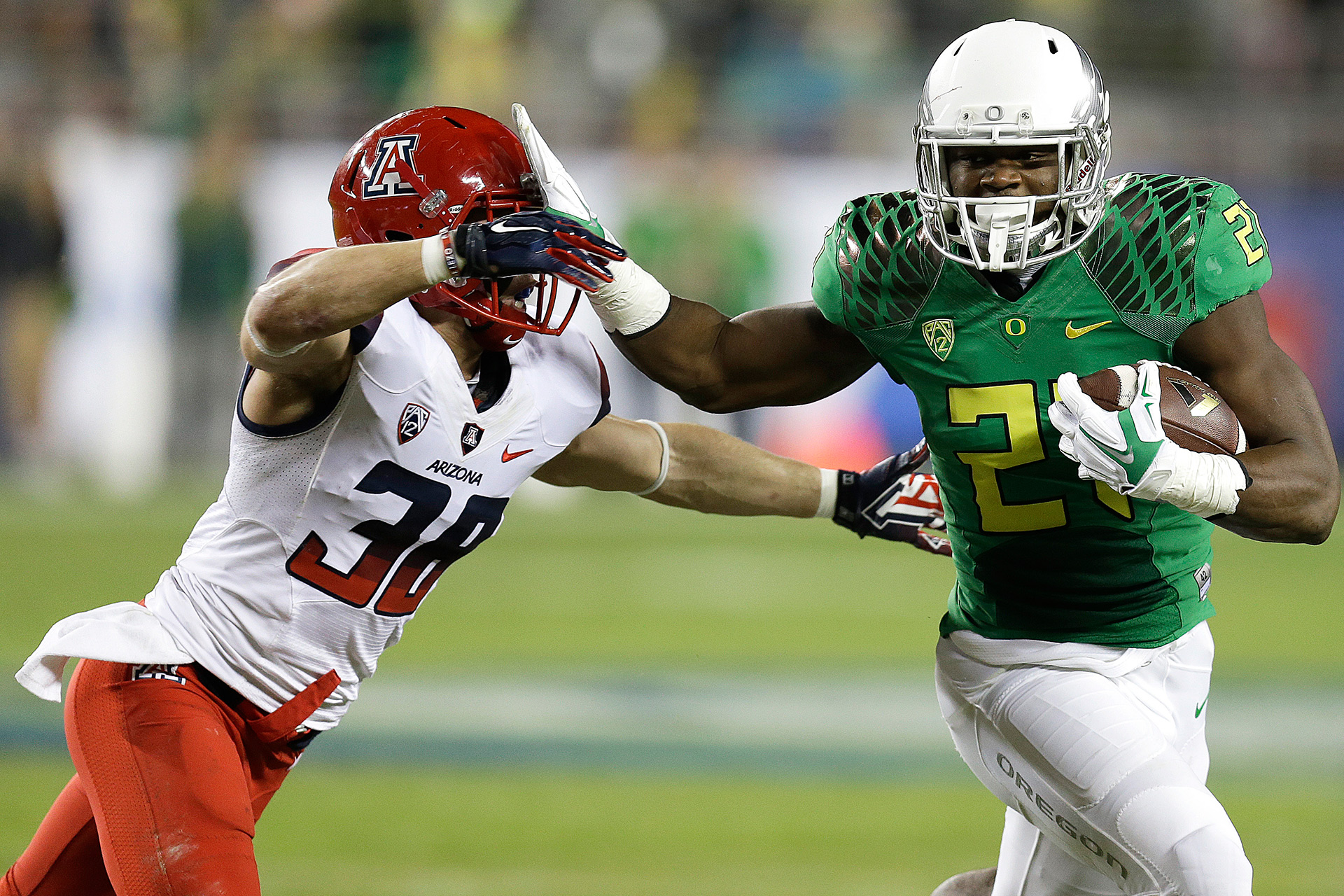 As I was getting back into football, I went to a lot of camps the summer before high school. A lot of the coaches and personnel at the camps were telling my parents that I was going to be pretty good. But they wanted to wait and see, when it came to high school football. You have to be 16 to play varsity football in California. You can play when you’re younger than that, technically, but you have to do so with parental and medical consent. For that reason, my mom waited a long time to let me play — she didn’t want me going out there and getting wrecked by 18-year-olds.  I was young for my class, I’m thankful she waited to consent. It played a big part in my success, down the line.

I moved up to varsity late freshman season. I was playing in the rivalry game against Southwest El Centro. It was really close because both teams were really good. I didn’t get much playing time, but then they put me back there on a kickoff return. I returned it for 60 yards, first touch. I was pretty excited. All my freshman classmates were there watching me and it was a pretty cool to see a freshman on varsity. I made a big play and it felt amazing.

That’s when I knew I was onto something.

But if you had asked me about Oregon back then, all I could probably tell you was, “forests.” I didn’t even watch much college football until I started getting recruiting letters when I was a junior. The first one didn’t even come from Oregon. It came from The University of Washington. When they offered, that was a big moment for me — that’s when I realized, hey, I could get a scholarship to play football and go to college. 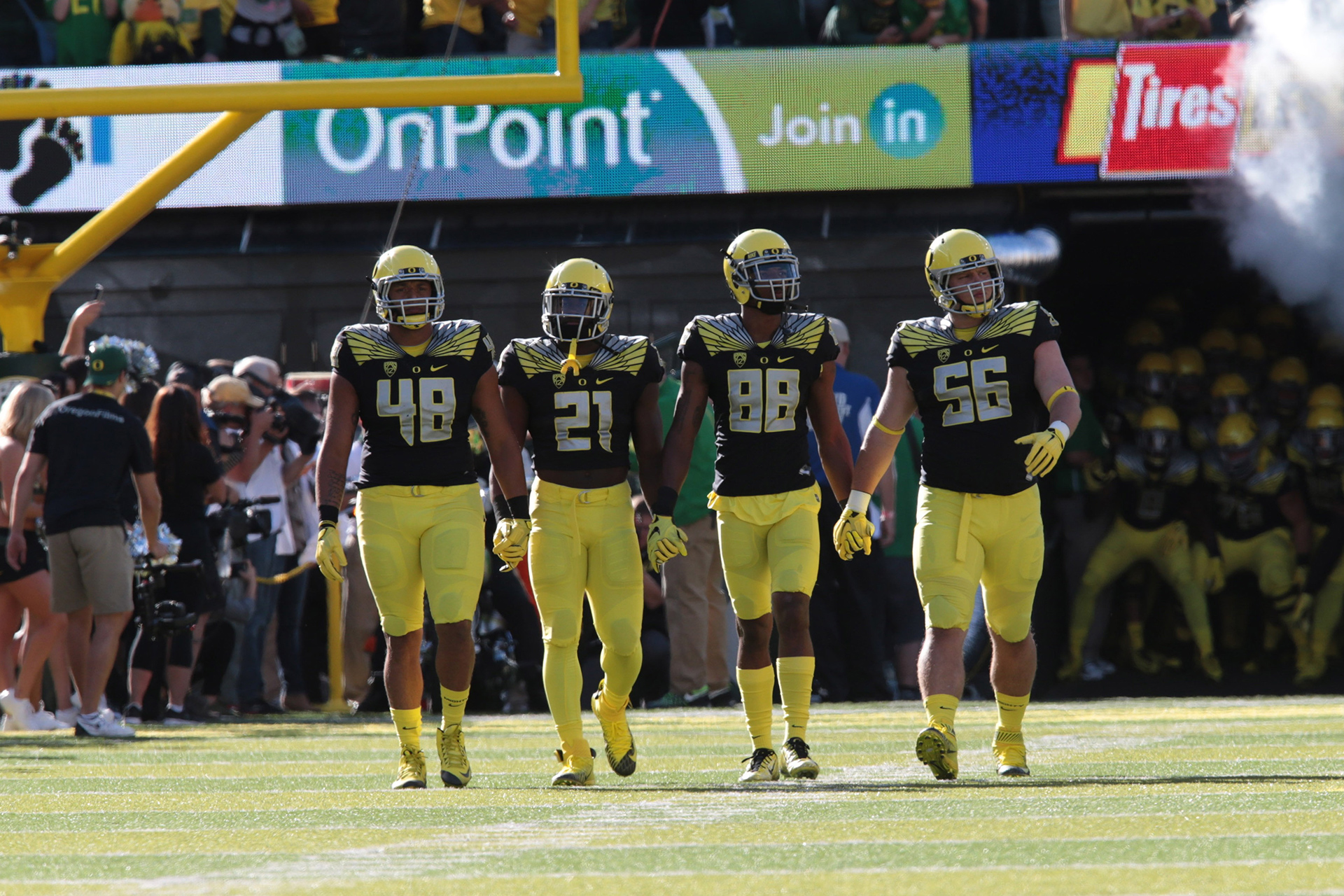 I remember thinking it was really far away. To get to Imperial, CA from Eugene, OR is a haul. You have to fly to San Diego, and there are no direct flights, so that usually runs you about three-and-a-half or four hours. Then you have to drive east to Imperial. It’s two hours, if traffic is good. But despite that, Oregon’s running backs coach, Gary Campbell, came early and often. I realized immediately how important I was for him to come all that way. As a junior, I ran for 2,400 yards and 34 TDs. I started getting offers from everyone: Alabama, UCLA, USC, Florida State. But soon enough, I knew that I wanted to play for Oregon and be coached by Coach Campbell. Even though it’s a long way from home — which I knew would be hard, because I’m really close to my parents — I signed a LOI with the Ducks.

Before I got to campus, I was already watching clips of their former backs on YouTube — guys like LaMichael James, Kenjon Barner, De’Anthony Thomas. Each of them have different styles, but they were all really successful in Oregon’s system. I knew if I put in the time, I could have a lot of success there, too.

There’s no place like Oregon. They do everything for the players. The people they bring through to speak to you, the personnel they surround you with, the facilities, all of these things continue to blow my mind. (As I write this, I haven’t even seen the 30,000 square foot Marcus Mariota performance center yet. It has a boxing ring! Sleeping pods!). The lessons off the field are the things that make Oregon different from other schools. Oregon wants you to be a good person, and they go out of their way to set you up for life after football.

My personality fits well in Eugene, both on and off the field. People who know me may think this is an understatement, but I’m just chill. Sometimes I don’t feel like I’m an athlete because I’m so chill — maybe too chill — but that’s how it works for me. Also, the people that really know me think I’m pretty funny.

It’s a little hilarious that I ended up in Eugene — which is a big outdoors town suited for hiking types — because I’m definitely an indoors person. Hiking? Noooooo sir. Let’s get some NBA 2K or FIFA going. When I’m by myself, I love to binge-watch shows; Vampire Diaries, The Originals. I just got really, really into Power.

Speaking of FIFA, I’m getting into soccer more and more. When I came to Oregon, my roommate Arrion Springs started exposing me more to the game, since he’s a huge fan. The European leagues, the Champions League, I started to watch more and get into it. I feel like people don’t like soccer because they don’t understand it. But I love the tension. I love the skill. It keeps you on the edge of your seat. I’m a Chelsea fan, but I also love to watch Real Madrid, with Gareth Bale and Ronaldo. I spend a lot of my downtime watching them, and it makes me think about my own patience in space when making plays. 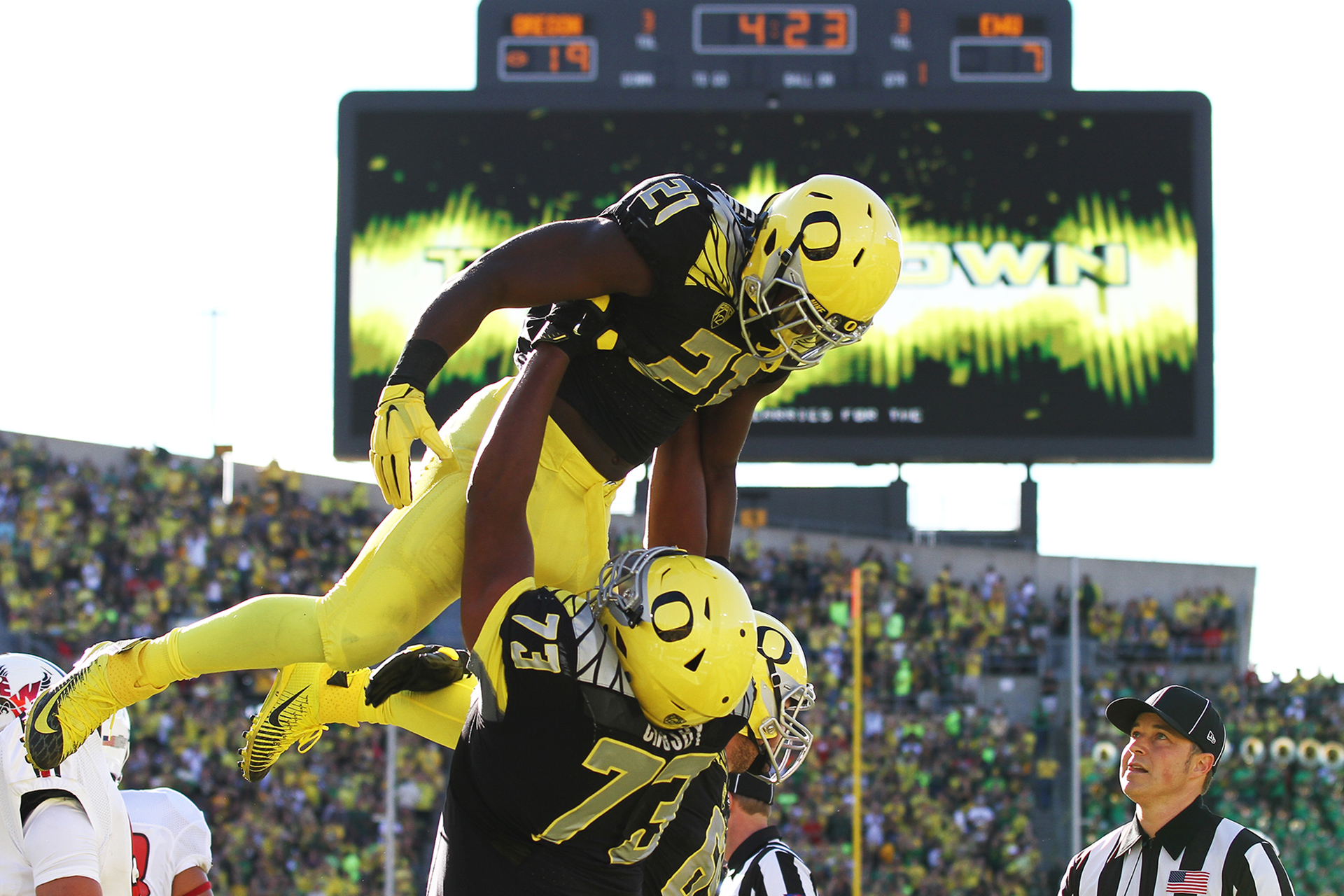 On game day, though, it’s a different story. I lock in. I pull up my music library, scroll to Drake, and just hit shuffle. VIEWS is dope but I like the older stuff better.

A lot of people ask me about our jerseys — all the uniform combos we do. You know, it’s not as big a deal as it seems like. But it does feel awesome to walk into the locker room and see what the equipment staff has put together. I’m honestly more impressed with how they handle our equipment — everyone’s pads and all that. It’s always on point. When you see the jerseys, sometimes you’re like, “Man, are you sure that’s going to work?” Then you see a replay of the game on TV and you’re like, Yeah that was dope!

Games in Eugene are special. You have these diehard fans, people haven’t missed games in years. It makes you feel like a hero.

While it’s fun to make big plays, you know what gets me the most juiced? When guys who usually don’t get playing time go out there and make plays. That’s really exciting for me. Knowing those guys, knowing how hard they’ve worked to get a shot — it’s heartwarming.

I’m excited about this year’s team. Our young core of receivers, in particular, I think are really going to surprise people. For me, this is all part of the journey. In college, you get tested — you learn your own ways, especially being away from home. But I’m learning a lot about myself being here.

Mom, I love you, but I’m glad you didn’t make me go to your college so you could hover.

After all, a Duck’s gotta fly.