“What’s so funny? What are you laughing at?”

It was the second regular season game of 2007, my rookie season, and Jordan Gross, one of the best offensive tackles in the game, was just laughing in my face in the huddle. It hadn’t been a great day for me, since I’d just given up my third sack on the day.

The thing was, before this game, I had actually been doing pretty well.

I’d played center all throughout college at USC, and obviously wanted to play center in the pros. When the Panthers drafted me in the second round in 2007, though, they already had a center on the team, one they had signed the previous season but was recovering from an injury. I was really just there as insurance. They didn’t need a center. There was, however, an opening at right guard.

When the coaches asked me in training camp if I wanted to switch over to guard I told them yes, absolutely. Anything to get on the field — even if I had no idea how to actually play guard.

My first game was against the Patriots in the preseason. I was blocking guys like Tedy Bruschi and doing a great job of it. I remember thinking, Oh yeah, I can definitely play in this league. The older lineman could see my excitement, and they tried to warn me.

“It’s just preseason, Ryan,” they would tell me. “When the regular season starts, the intensity goes up a whole other level.” 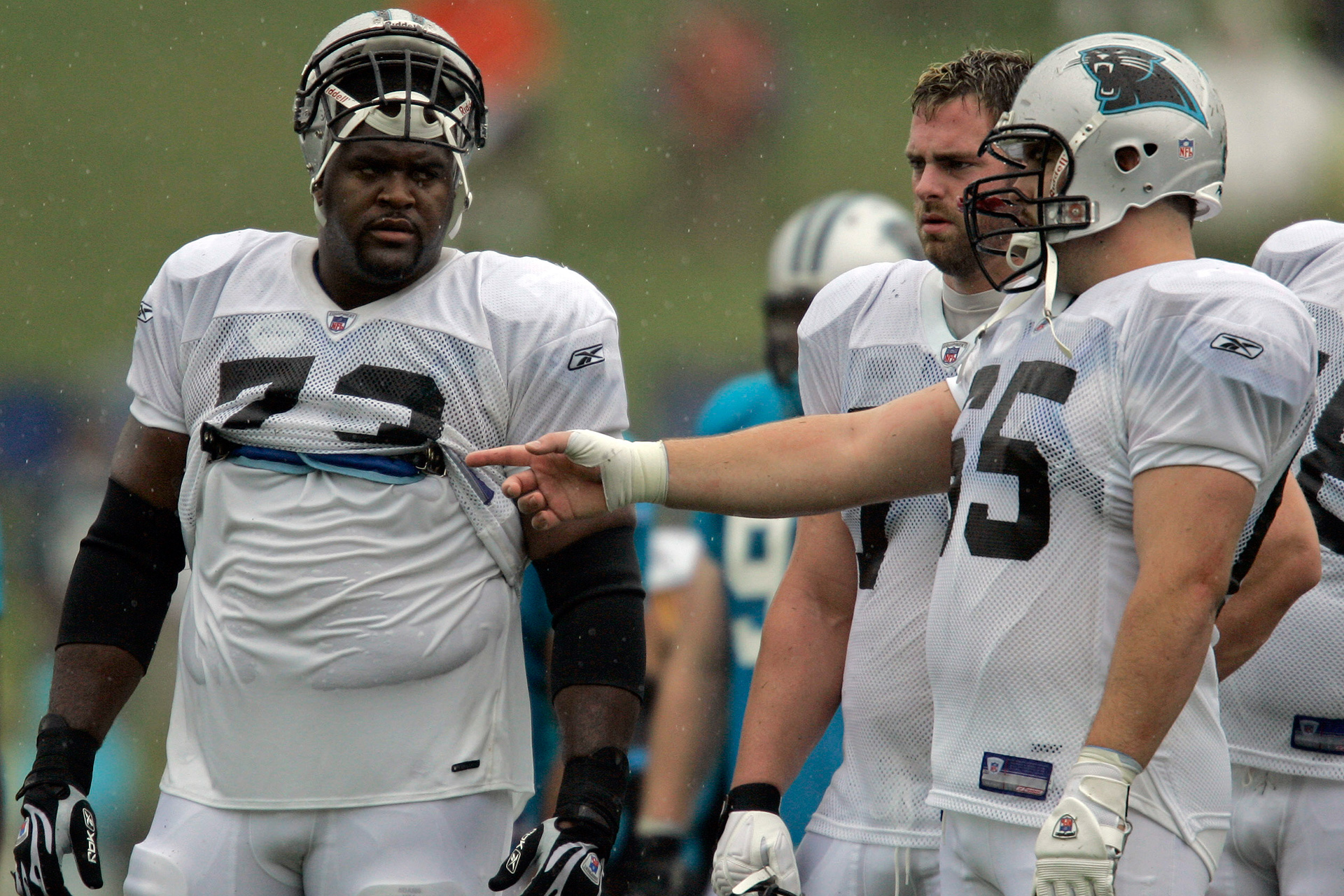 Fast forward to our first regular-season game against the Rams. I was starting at guard, lined up opposite La’Roi Glover, one of the most dominant defensive tackles of our era. He was a stud, man, he was amazing. I did pretty well against him. I didn’t give up a sack. What I didn’t realize at the time, though, was that I got La’Roi Glover on the back nine, during his second-to-last season in the league.

Once again, the older guys tried to warn me. Once again, I didn’t listen. I thought that those guys didn’t have my best interest at heart, that they didn’t want me in the mix because I was taking a job from one of their buddies. I was very sensitive and standoffish with them. What I didn’t understand was that they were actually looking out for me. They had taken a liking to me because I was playing well, and they wanted to help me improve.

The next week was the Texans game. Amobi Okoye had been the Texans’ first round pick that year. He was fast and strong, and my technique at guard was poor. I didn’t know how to pass set against him.

It was a long day. I had some good blocks to start, but then I gave up my first sack. What can I say? It was just humiliating. I had to watch Jake Delhomme get off the ground with his helmet twisted sideways.

Guys were trying to help me out and tell me what I needed to do, but I wasn’t really listening. I couldn’t.

I went into the mental tank, scared that I would give up another sack. When that happens, you panic, and all of your technique goes out the window. You’re in survival mode. You just start jumping out at the guy across from you and holding him and grabbing him and it turns into chaos.

The next series, I gave up another sack.

The worst part was that Jake picked himself off the ground with this bewildered look on his face like, Where did that come from? That made me feel even worse. Jake was not afraid to yell and tell you how he was feeling. He would never specifically single a guy out, but he would yell stuff like, “Well, that felt great!”

I couldn’t wait for the game to be over with. Little did I know, the worst was yet to come.

Lots of times when you’re blocking a guy and the ball is thrown in the air, he’ll kind of stop and look at the ball or run toward the receiver to make a play.

So I got used to this pattern, right?

Early in the fourth quarter, I was blocking Anthony Maddox, and he stopped rushing to follow the flight of the ball.

I stopped too, and looked in the same direction.

But Jake hadn’t thrown the ball.

Out of nowhere, Maddox turned it back on, swam past me, and just killed Jake.

We got back into the huddle, and I had this terribly panicked look on my face. That’s when Jordan started laughing at me.

“What’s so funny?” I yelled (I might have actually cussed).

He just looked at me with a big smile.

“You won’t understand it until you’re an older player,” he said. “I want you to remember this five years from now when you have a rookie in the huddle with you who’s panicking because he gave up a sack and he doesn’t know what to do.” 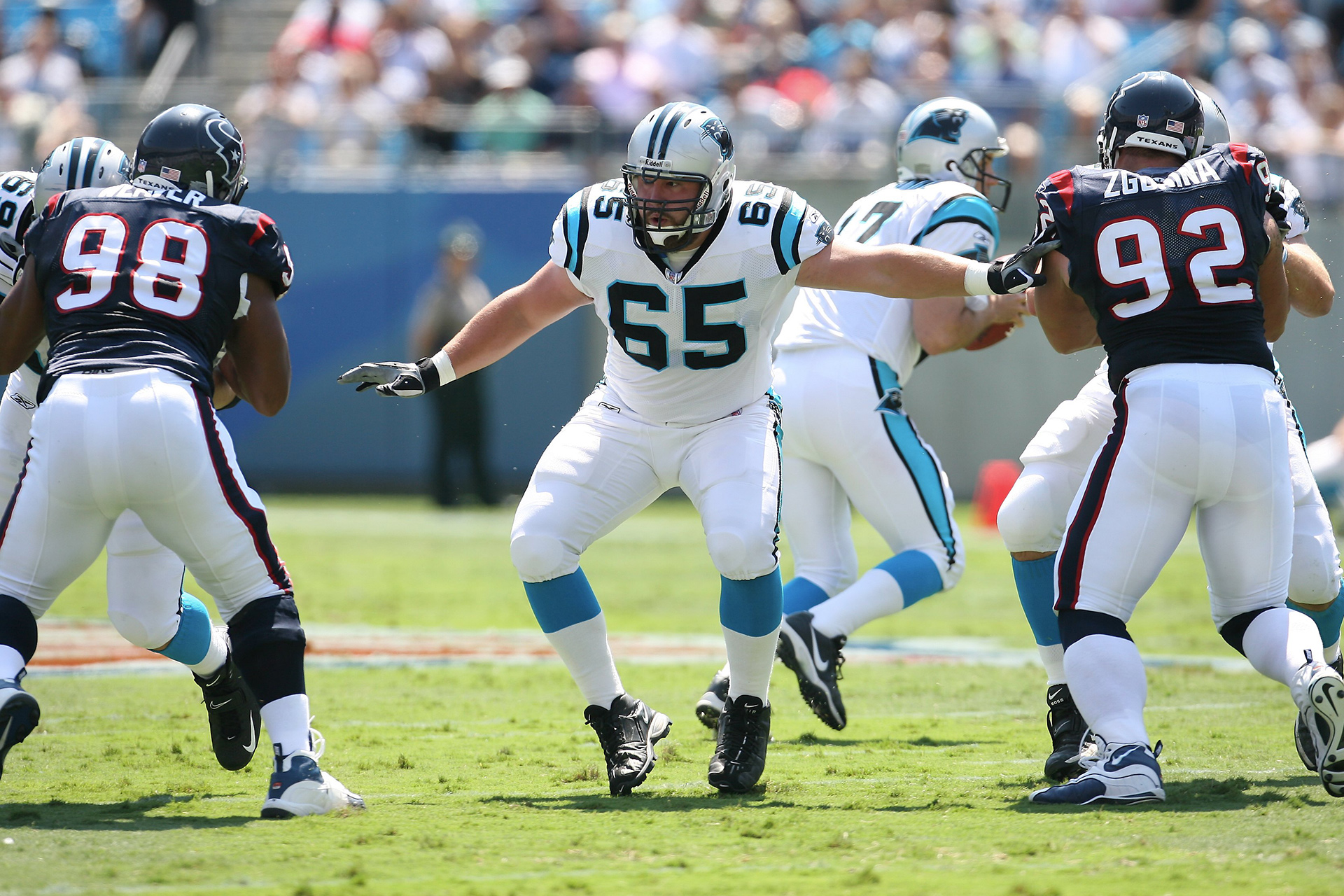 Part of the reason Jordan and I, along with another former teammate, Geoff Hangarter wrote The Rookie Handbook was to remind rookies that they’re going to make mistakes their first year in the league. Some of them will be hilarious.

There are no bad football players in the NFL — there are just better ones. Every week, you’re going to play against somebody who was somebody in college. Bad things are going to happen. How you react after something bad happens is the most important thing. Your ability to move on and learn from the mistakes you make is incredibly important in the NFL. The worst thing you can do is harp on your mistakes, because then you can’t focus on the now.

That’s easier said than done, obviously, but if you listen to the older guys in the locker room — those who want the best for you — then you’ll be O.K.

That’s what the handbook is for: To prepare rookies for everything they’ll face on and off the field their first year, and to make sure they’re treating their incredibly rare opportunity with the respect it deserves.

The one thing that has irked me the most over the past 10 years has been rookies who throw away their opportunities simply because they choose to give minimal effort. We may not all have the same physical abilities, but effort isn’t about ability. It’s about choice.

Not knowing your plays, coming into training camp out of shape, taking plays off in a preseason game? None of these things have anything to do with lack of ability. You’re simply making the choice to just get by.

Why does this happen? Is it fear of giving it your all, only to fail? Do those that just cruise take comfort in knowing that they might have made it had they only focused and worked a little harder?

I don’t have a good answer because there isn’t one. So, just a heads up for all of you rookies out there. If it’s important to you — I mean truly important to make the team and be a part of this incredible fraternity — give relentless effort. Especially over aspects of the game where you have control.

Another heads up: Watch out for pranks.

When a vet hands you a water bottle, make sure it’s completely sealed. When you’re sitting down on the toilet before the game, watch out for a bucket of ice-cold water that’s about to be dumped on your head.

My rookie year, a second-year player messed with Steve Smith. I forgot what this guy said or did, but we all thought Steve was going to explode. He didn’t, though. He didn’t say anything, just kept to himself. We were all really confused.

So we went out to practice, and when we came back, that other player’s entire locker had been cleaned out. All of his stuff was gone.

“Rookies, help me find my stuff! NOW!” He barked.

Steve had a big grin on his face, and he was giving us clues about where the stuff was. Only he was doing it in the form of riddles.

I don’t remember what they were, but the last one had something to do with the Titanic.

At the bottom of the tub was all of the player’s stuff, packed into a mesh bag, and tied to a 45 pound weight. We had to get in the freezing tub and basically deadlift his stuff out.

I learned pretty quickly to never mess with Steve Smith.

He wouldn’t go out of his way to prank anyone, he would just retaliate tenfold so that nobody else would ever mess with him again. I don’t know what inspired guys to try, but he set the precedent pretty early that if you do, bad things would happen.

Pranks, for the most part, are fun. They’re a great way to lighten the mood and breathe some life into the locker room. Remember, even though you now play in a locker room with grown men, many of them married with children, it’s still a game you play for a living. Don’t be surprised by the 35-year-old teammate that likes to prank. Being in the locker room keeps you young and immature to a certain extent — in a good way. Maybe you can’t have the type of fun that people in a normal office have but, really, which job would you rather be doing?

There’s such a thing as going too far, though. Hazing has no place in the NFL. Respecting the game means respecting the people who play it. Humiliating or hurting someone in the locker room just for a cruel laugh disgraces the sport as much as a cheap shot on the field. 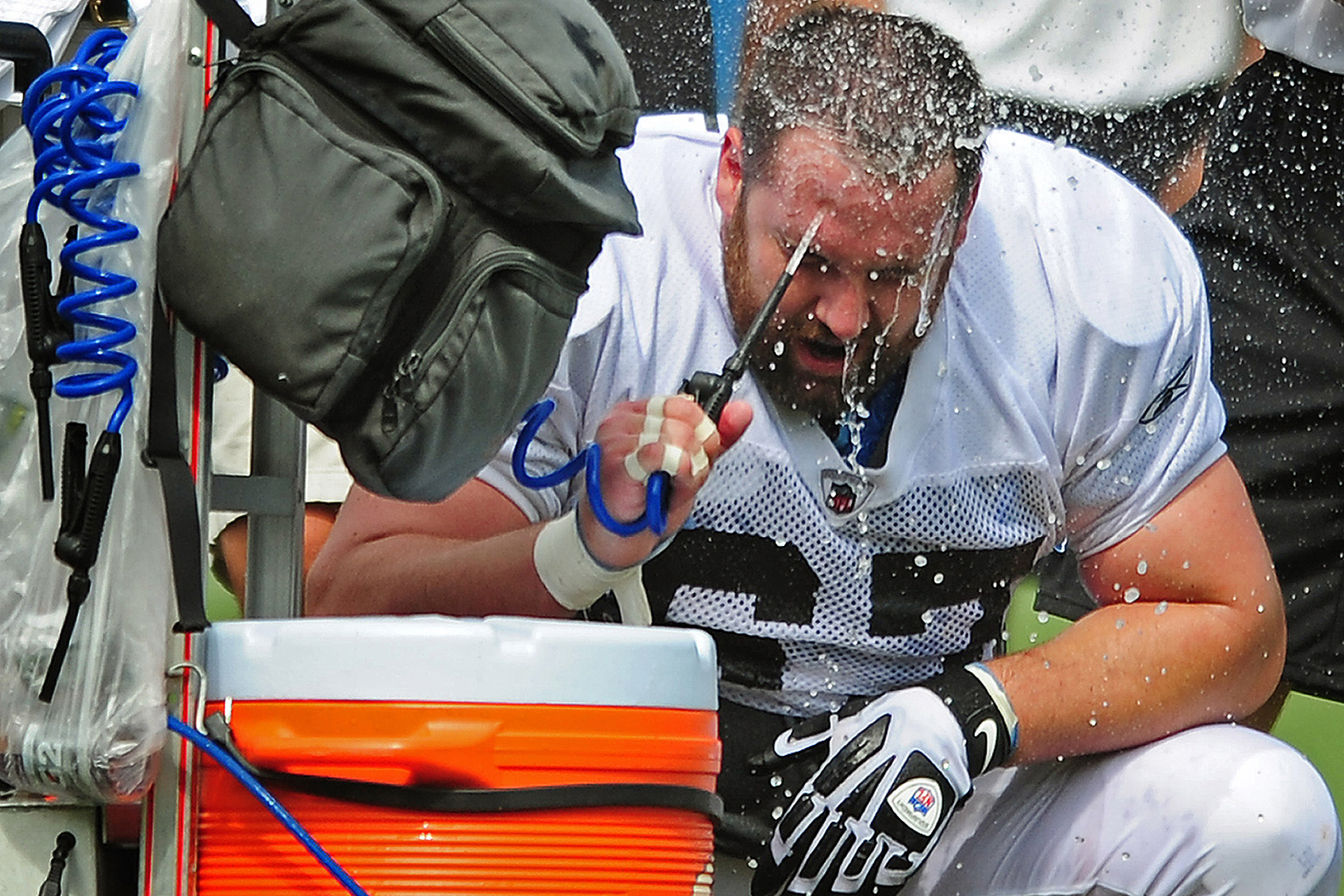 Seven years after Jordan laughed in my face, I was in the huddle with a rookie guard, Trai Turner. Trai went to the Pro Bowl last year, and he’s just a tremendous guard. But when he came into the league, he had the typical rookie struggles.

In this particular huddle, I looked over at Trai and could read his face with complete clarity. There was terror, frustration, anger and, of course, panic.

He was freaking out.

I just started cracking up.

To learn more about The Rookie Handbook, click here.