“Show me you have balls!”

John McEnroe screamed that at me in the little locker room behind No. 2 Court at Wimbledon.

I had never heard anybody doubt my intensity before.

It was during a rain delay in the fourth round. David Goffin was up two sets to love on me. In my career, not only had I never come back from a 2–0 deficit, but I’d also never won a third set after losing the first two. This time, though, I scratched out a break and won the set before the rain started to fall.

I felt an immense sense of relief. I felt that overcoming that hurdle, at that venue, was a turning point in my career.

My coaches, John and Carlos Moya, agreed. They both took me aside the next day and pointed out that my comeback victory could be a big turning point if I built from this momentum. I have had every intention of doing so since.

I’ve always been the kind of person that forged my own path. I wasn’t one of the kids that went to Florida to an expensive tennis academy and boarding school. I trained in Canada, my home country, until after I turned pro. My path is my own, and this big moment gave me an opportunity to think about how I got here. 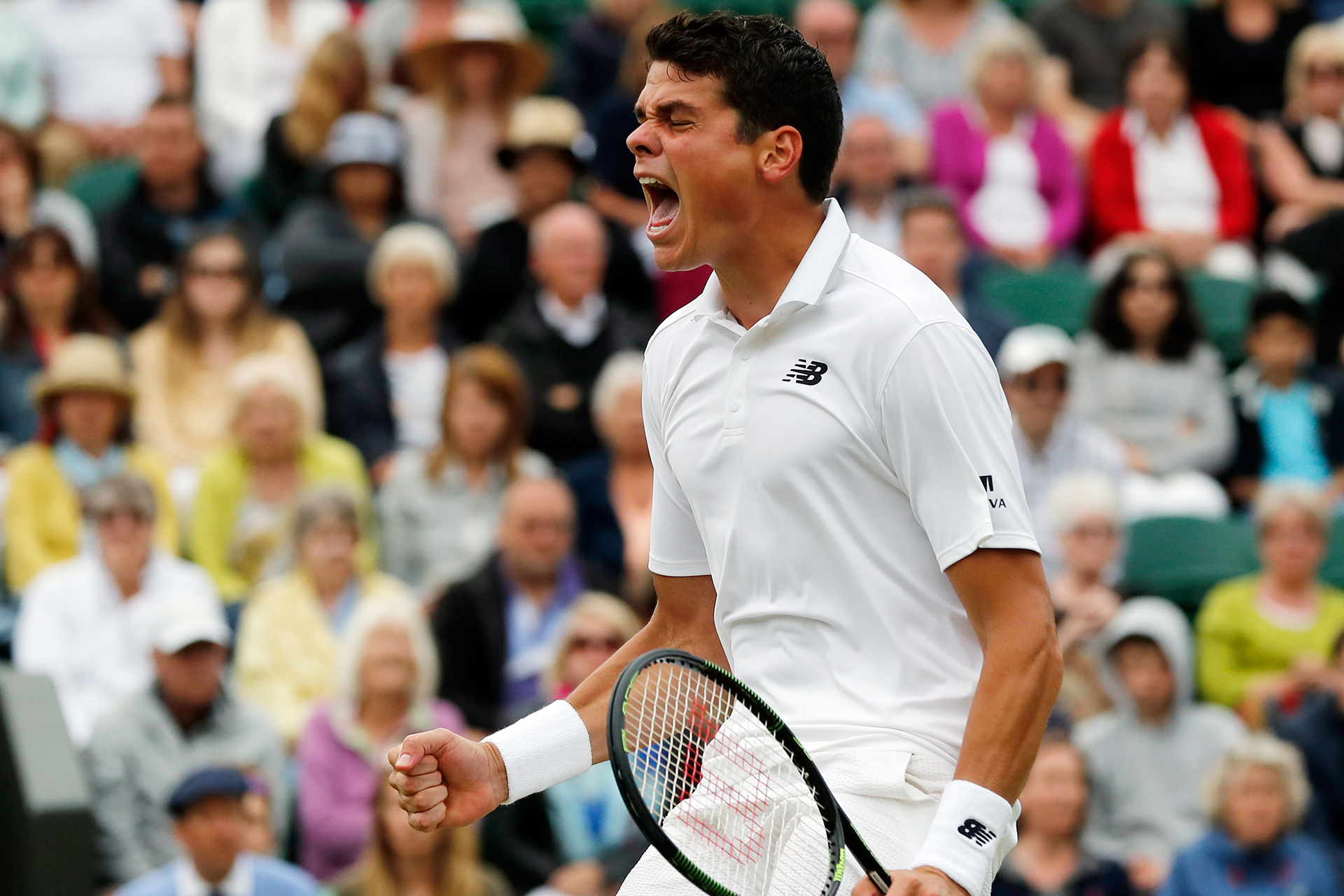 My family — my parents, my brother, my sister and me — moved to Canada from Montenegro in the spring of 1994. My parents were shocked because it was April and there was still snow on the ground; not just a little snow, but about two feet of it. Welcome to Canada! Both my parents are engineers and they gave themselves a year to find jobs in their field — they refused to settle for anything other than that. They got jobs on the same day and our family began to feel settled, at home, in Canada. I really believe that I got my work ethic from my parents, whom I still talk to every day, whether it’s for 30 seconds or thirty minutes.

We arrived in Canada with little financial means, but once my parents got established, they signed us up for sports. They both played sports growing up, and you can even say I get my competitive streak from my mom. In 1999, my father signed me up for tennis camp because that was close to where we were living in Brampton, Ont., outside of Toronto. But the funny thing is, I didn’t love tennis at first — I had more fun playing street hockey, which was the sport of choice for all the Canadian kids in our neighborhood. By chance, I played in front of a coach named Casey Curtis. He was my coach for the first nine years of my “tennis existence,” I like to say, and he saw some potential in me. Casey said I had a future in the sport and that I should be on the court five to six days a week. At that point, I wasn’t even playing regularly, so that felt like a lot. But my dad had told me that if I was going to make the most of camp, I should tell the coach I wanted to play in matches at least twice a week. And I was the type of kid who, if my dad said to do it, I did it.

Another thing you need to know about my parents — something that I’m very grateful for —  is that, from the outset, their attitude was, We don’t know anything about tennis, and we’re not going to talk to you about tennis strategy. As long as you’re an honours student, you can play as much tennis as you want. They left the tennis stuff to my coaches. So, on long drives between tournaments, we never talked tennis — my dad would ask me to solve math equations. We still don’t talk about tennis, ever. But they have always been committed to supporting my passion for the game, and that has kept me motivated. I knew I had to make that count.

My parents couldn’t afford the court fees at the private tennis club in town — I believe at that time it was something like $24 an hour. But, again, my parents are committed people — these are two people who commuted hours to and from work every day to make our lives better. My father worked out a deal with the club where he would pay $200 a month and we could use the ball machine as much as we wanted in the morning from 6–8 a.m., and again at night from 9–11 p.m. That’s what we did. Every. Single. Day. Five days a week. Even in winter, when the heat wouldn’t come on until we got there in the morning, so for the first hour I hit balls constantly just to stay warm.  That’s when I fell in love with tennis.

I knew even then that I wanted to play on the biggest stage. My mindset was, if I worked hard enough and gave it my all each and every day, I could make my dreams come true. 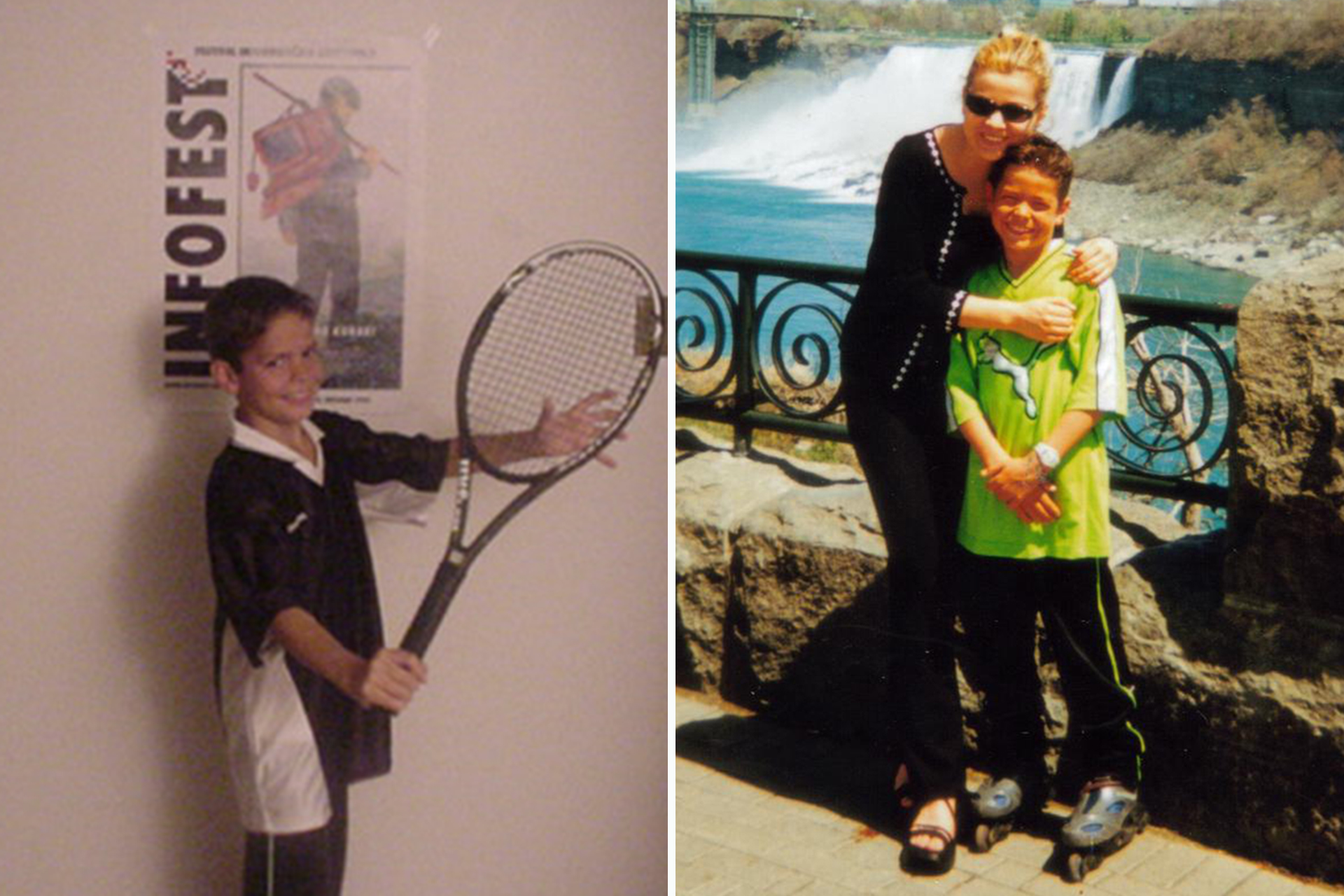 I was playing well after getting past Goffin. I made it through Sam Querrey in four sets in the quarterfinals.

Next up, Roger Federer.

The best Wimbledon player in history — who had even surpassed my childhood idol, Pete Sampras, on this very grass — was waiting for me in the semifinals.

I stood at Centre Court the morning of the match, the same place where Sampras beat Patrick Rafter in the 2000 final to win his record 13th Grand Slam tournament. (I must have watched the VHS recording I made of that match a thousand times.) I was aware of the fact that Roger had played in 10 previous Wimbledon semifinals and in those 10 matches, he had only lost one set. One. He was 10–0, 30–1 in sets. Amazing. I had been working with all of these incredible coaches like Riccardo Piatti, Carlos and John and I wanted to make the most of our collaboration. I put a lot of pressure on myself, because Roger had dealt me my most devastating loss — a 6–4, 6–4, 6–4 defeat in the 2014 Wimbledon semifinals. It took me a long time to get over that.

I wanted to get revenge. I didn’t just want to send a message. I wanted to make a statement.

This match had the same, eerie feel to it as the one in 2014. Even though I won the first set, I was just sort of hanging in there. He was playing better than I was, and even through the beginning of the fourth set he had chances to put me away. But I just told myself, Stay close, stay close, you can play better than this. I needed to find another gear. I knew I had it. I’d found it against Goffin.

All of a sudden, Roger was serving at 5–6, up 40–love, and I played one good point. In that instant, Roger seemed more human than ever — and then he gave me two double faults. Deuce. Suddenly I’m thinking, I can get on top of Roger here.

Chances like that against “the Big Three” (Novak Djokovic, Rafael Nadal and Roger) are incredibly rare. You have to take them. 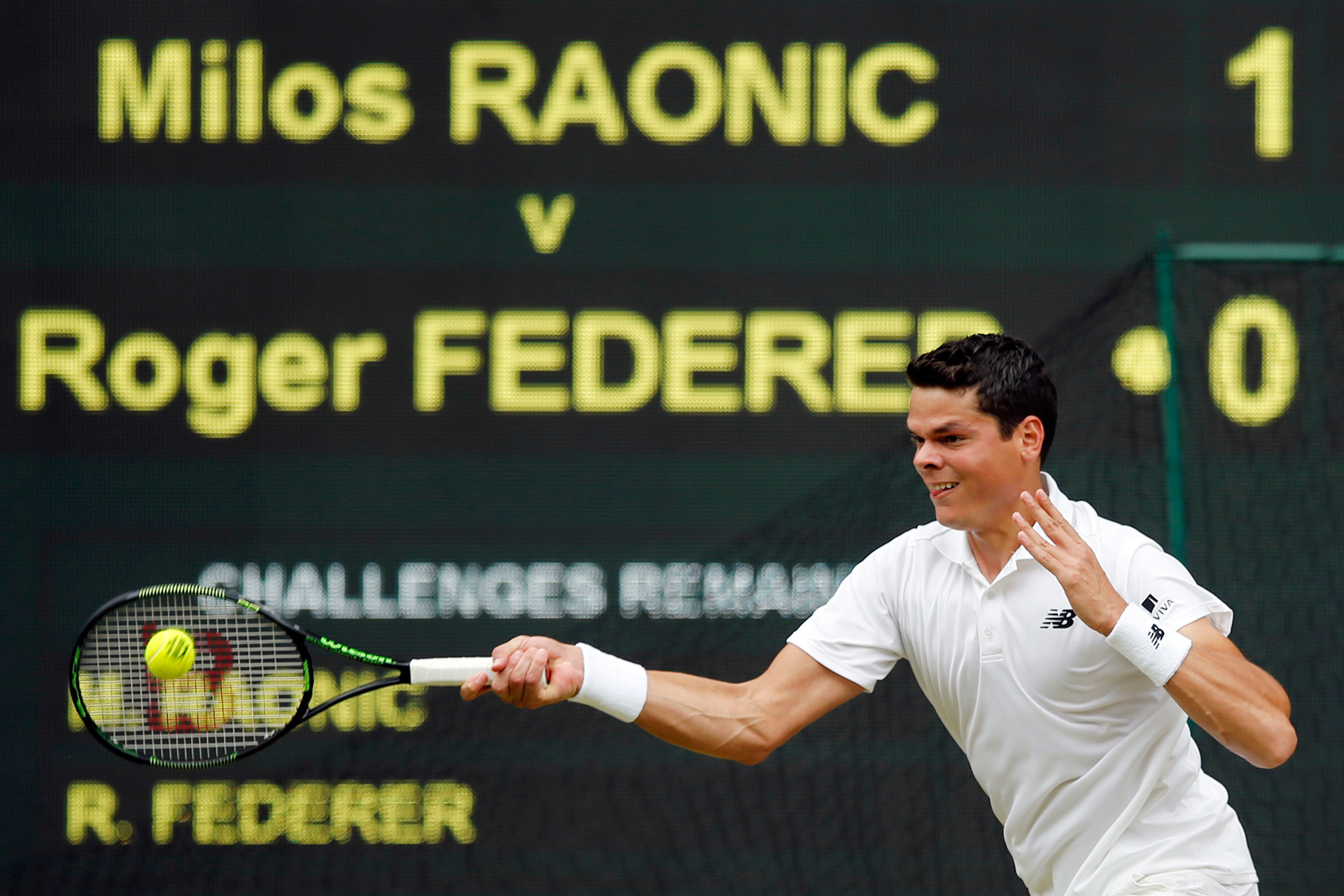 Everything sort of flowed very quickly after that, and I closed out the greatest player in Wimbledon history, 6–3, 6–7 (3), 4–6, 7–5, 6–3. After I won, everyone in my camp was beyond excited. Personally, I never took a moment to really enjoy it because I got very obsessed with what I needed to do to win the final. It was my first Grand Slam final, and I was fixated on it. It didn’t end up going to plan.

Andy beat me in straight sets. I was more disappointed with the loss than I was happy with the victory over Roger in the semifinal. This was a very significant and important revelation for me — that I hate losing more than I like winning. There was much more pressure on Andy, but I tried to treat the Wimbledon final like any other match.

In retrospect, that’s the one thing that I probably shouldn’t have done. I should have embraced the fact that it wasn’t a normal match. I thought that, if I could put myself in that situation again soon, I would do things differently. By the end of the tournament, I had the feeling I was steering more closely to the path I wanted my career to take.

And that’s why this year’s U.S. Open is one of the most important tournaments of my career.

I have to bring mental intensity from the first day of the draw. When I watched a replay of the semifinal match against Federer, I felt like I was putting every ounce of energy into it, and that showed in my play. But I could see a big difference in my on-court intensity between the final and the semifinal — it was absent in big moments against Murray. I kept those emotions bottled up, and I never let them out. That’s the biggest regret I have from what otherwise was a huge moment in my career.

I’ve learned a lot about myself over the past 18 months. I’m on this constant journey, I think, of improvement, in many different aspects of my life.  For instance, I’ve learned to love art galleries — John is a big art collector, so we like to talk about it on the road. I still think about a Yayoi Kusama retrospective I saw at the Victoria Miro Gallery in London with my girlfriend, Danielle. I love that visiting these galleries doesn’t exhaust me physically; it stimulates me. That way I have an outlet that doesn’t negatively impact the amount of energy I have when it comes to being on the court. 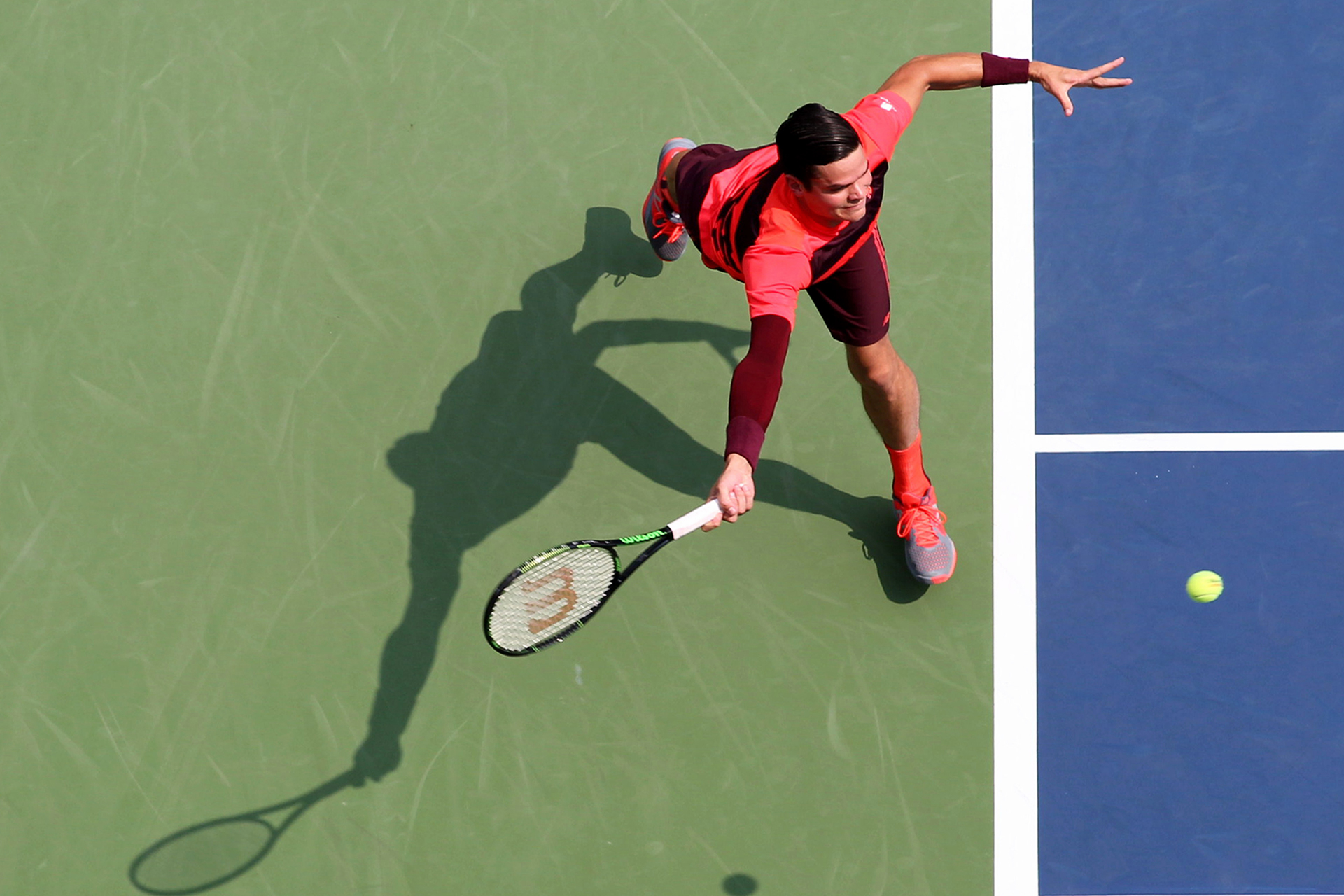 I’ve also been to more concerts in the last year than I had in my entire life previous. In June, John, Danielle and I went to a Coldplay concert at Wembley Stadium. I was blown away. Around 78,000 people packed it, and I said to Danielle that that must be one of the coolest feelings in the world, being on stage in front of that many people, all there for you, following your every whim. I felt wrapped up in the moment. I want to chase that feeling on the court.

In tennis, we sort of force the crowd to be split one way or the other, rooting for different competitors. But the U.S. Open is unlike the other Grand Slam tournaments. Playing in New York is one of my favourite experiences. Wimbledon has a special feel to it and has some prestige that is unmatched by the other Grand Slam events, but for me, having grown up watching North American sport, the electricity of the U.S. Open — hearing the hecklers and the hooligans at Flushing Meadows — has always given me a bolt of energy.

I remember, when I played in my first Grand Slam tournament in 2010, when I was asked what I would like to achieve I said I would like to be a solid top 50 player and hopefully get into the top 10 once. Now, my expectations have shifted drastically.

I want to be No. 1 in the world. I want to look back on my career, knowing I put everything I could into it. Hopefully that translates into winning a Slam, or a few Slams.