Portraits From a Jail Cell

I was waiting with my grandmother in the waiting room of the Ionia (Mich.) Correctional Facility. I’ll never forget the sights and sounds of the place: the wailing cries of newborn babies, the way a light bulb would flicker right before it lost power, the pleas of inmates who wanted more time with their loved ones. But one sound in particular I’ll never be able to forget.

When you’re in the visiting area at Ionia and you hear that buzz, it means a prisoner is on his way in, to sit across a table – and behind a pane of plexiglass – from his friends and family and talk to them on a telephone. In my case, the prisoner on the opposite side of the plexiglass was my father.

I was four years old. 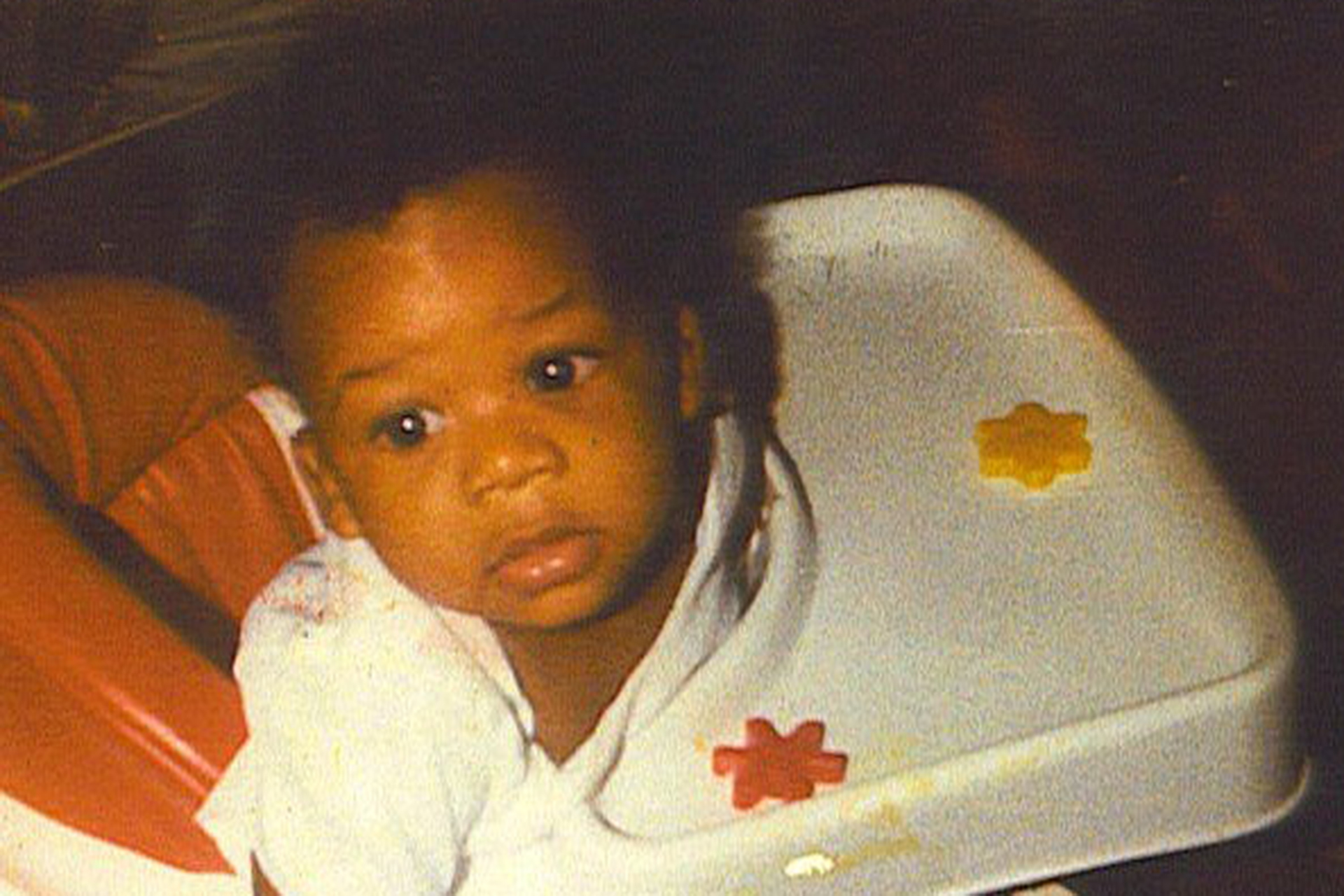 Growing up on the east side of Detroit, you’re surrounded by three things: drug-dealers, pimps and killers. Almost daily, I could hear the crackle of gunfire in my neighborhood. I was often caught in the wrong place at the wrong time and had nearly been killed more than once. Oddly, I got used to it.

In 1984 my father was arrested and charged with being an accomplice in an armed robbery. From the moment my mother received the midnight call from my father in jail, our lives changed dramatically. Money was already low, and in that instant our dreams of moving to a better neighborhood were dashed completely. After my dad was convicted and sentenced to 26 years, the only thing on our mind was survival. So much for one big family.

Even though there was a lot of turmoil on the surface in our family, there was plenty underneath too — especially because I was worried that I’d never live under the same roof with my father again. Almost every weekend when I saw my grandmother, I asked her the same question:

“When is dad coming home?”

That’s all I wanted to know. That’s all that mattered to me. Her answer never changed, no matter how many times I asked. She always replied with the same words.

“He didn’t get parole, but we are praying on it.”

My grandmother always kept the hope, but it was harder for my mother. She said she felt sometimes that she would never see him again. She stopped visiting the prison because she couldn’t handle seeing him behind bars. We would get our hopes up every time he came up for parole, and when it was denied we would be crushed. It was hard to keep the faith, and to take my mind off of it I would spend time at the Crews’s. 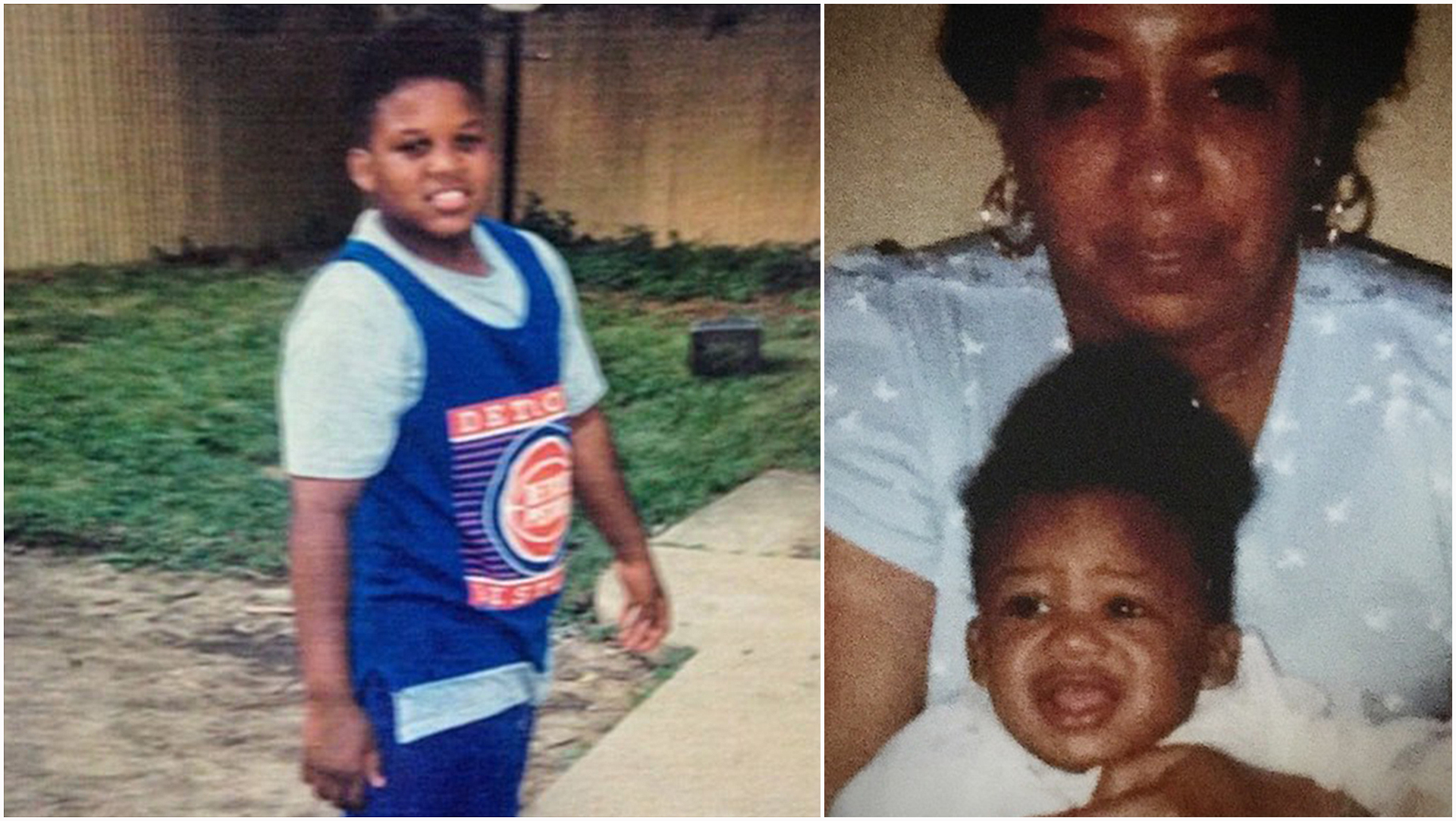 In my neighborhood, most households were the same. One mother, no father and a whole lot of kids. But not in the Crews’s house. When I was eight, I was friends with Ron Crews, who was the same age – and the only person on the block with two parents. His father, John, was willing to play catch with any kid at a moment’s notice (something I frequently took him up on), and could cook up a feast that would make Bobby Flay proud. Being at their house always made me feel loved. Watching the way Mr. Crews held down his household was something you didn’t see too often in my neighborhood. Whether it was cooking, cleaning or helping Ron learn his receiving routes for little league football, Mr. Crews did it all.

I often caught myself walking back and forth past their kitchen window just to get a whiff of the aroma from Mr. Crews’s famous pancake breakfasts. His family was everything I wished mine could have been. If my mom caught me, she would tell me to get away from the window – and reassure me that if my father was around, our home wouldn’t be any different. She never once bad-mouthed him or ran him down in front of me.

I had an easier time understanding my father’s incarceration than others around me. I didn’t see someone who was only a thief and a convict. I saw somebody who had made a mistake. More important, I saw a person with whom I wanted to build a long-lasting relationship — no matter what. 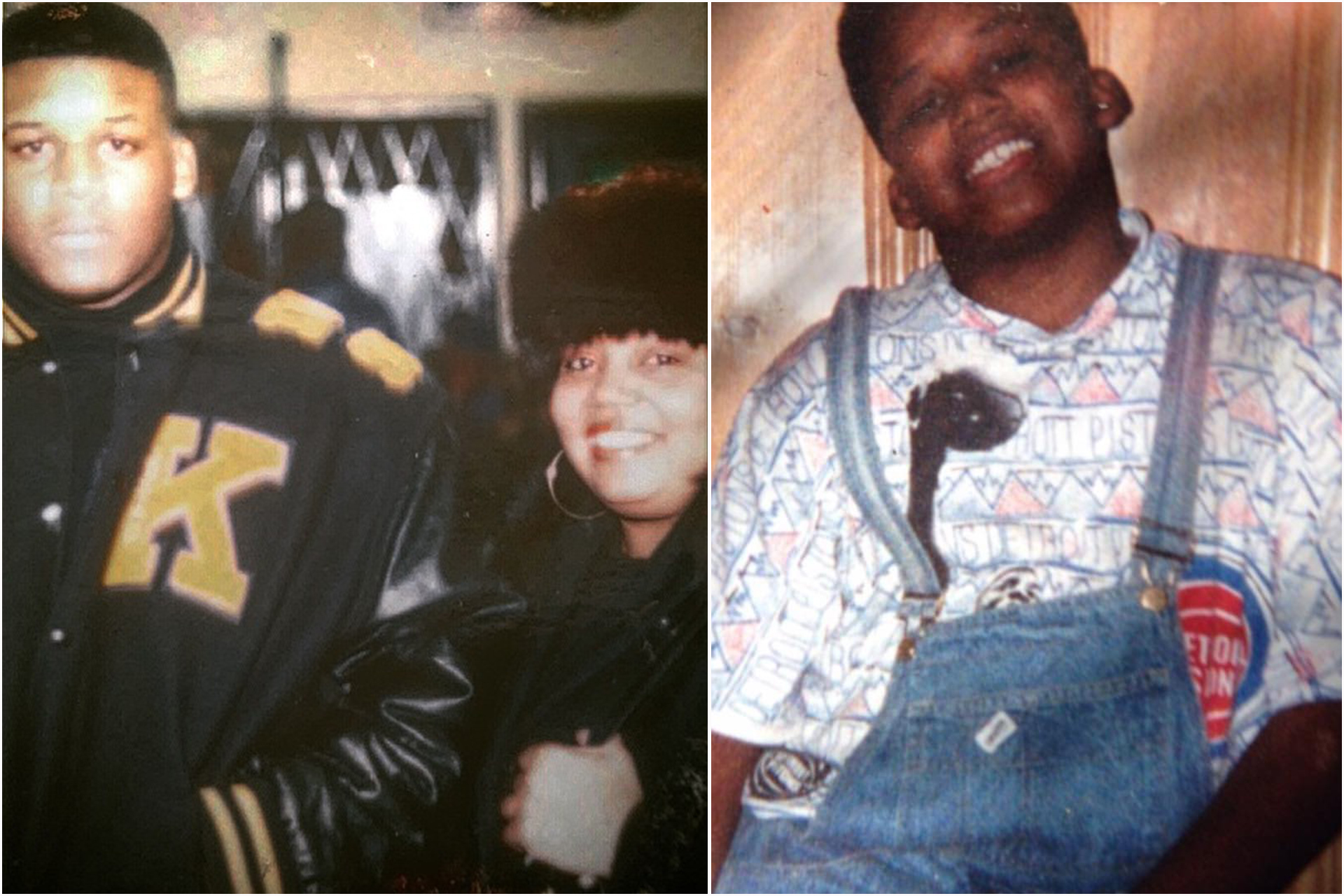 When I first went to Ionia, I took a moment to take in my surroundings. That was my way of passing time and settling my nerves. From the dusty, old clock in the corner with the minute hand that never seemed to move, to the fake beach backdrop used for family photos, I noticed every detail. And when my dad would finally appear and sit down on the other side of the plexiglass, my focus shifted completely to him. I counted the number of times he blinked and listened to the sound he made by rhythmically tapping his his knuckles on the table.

Nothing much changed there over the years, but as time went on one thing about my father’s appearance never failed to trip me up: the length of his hair.

In Detroit in the early 1980s, most African-American men had Afros similar to the one Richard Roundtree had in the Shaft movies. If you were a fan of Shaft and its sequels — like I was — then you remember how clean his Afro was, even in the heat of battle. It was like no matter how many times Shaft jumped through a window, or chased down bad guys, his ’fro always kept its shimmer.

My pop’s ’fro had been a replica of Shaft’s before he went to prison. But as his time on the inside passed, his Afro grew out into long, unkempt strands. His hair grew so long that he had to stuff some of his dreadlocks into his pockets just to keep from tripping on them. Just looking at him — at his unkempt hair and the deepening wrinkles on his face — made me realize how hard the years are for people who are incarcerated.

As my father was transferred to multiple correctional facilities throughout the midwest during his sentence, I kept in touch and visited him when I could. My trips to visit him in prison had become a routine, and in some ways those places became like second homes. No matter where he was, the process of visiting him was always the same: Sign into the visiting area, go through a full-body search, take a photo for records and then wait until the guards brought him out. All the guards at every prison knew my name.

I visited my father so often because I wanted to show him that I cared about our relationship. My dad reciprocated in an abstract and beautiful way. 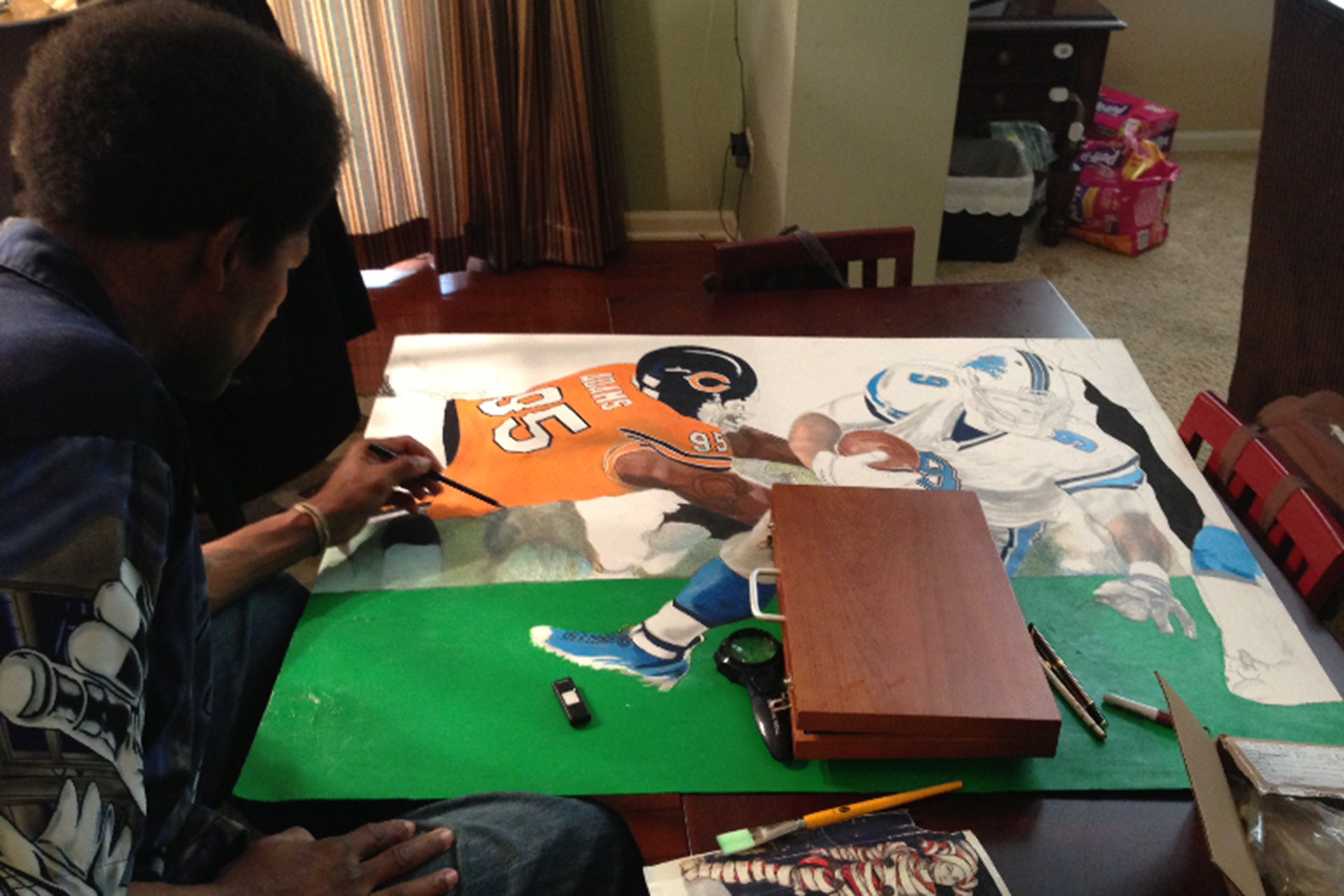 My dad is a natural-born artist. He was like Michelangelo when he was a kid. My grandmother used to tell stories of how he painted murals of heaven on his walls and ceilings of his bedroom. When he was behind bars, he was really able to hone his craft. With the pension he received from being in the Army, he was able to go to the prison commissary and buy art supplies. Whether he needed pencils, paper or paint, he could get everything he wanted.

Every few months he would send me some portraits that he had drawn —  Michael Jackson album covers, pictures of the Taj Mahal and everything in between. These drawings were his break from reality. They were also a way for him to share his artistic gifts with me. Though my father isn’t emotionally open, he tried to share his love with me the best way he knew how.

The most interesting thing about his drawings wasn’t whatever subject he chose to depict, but the technique he used to bring it to life. Take my favorite picture, for example. 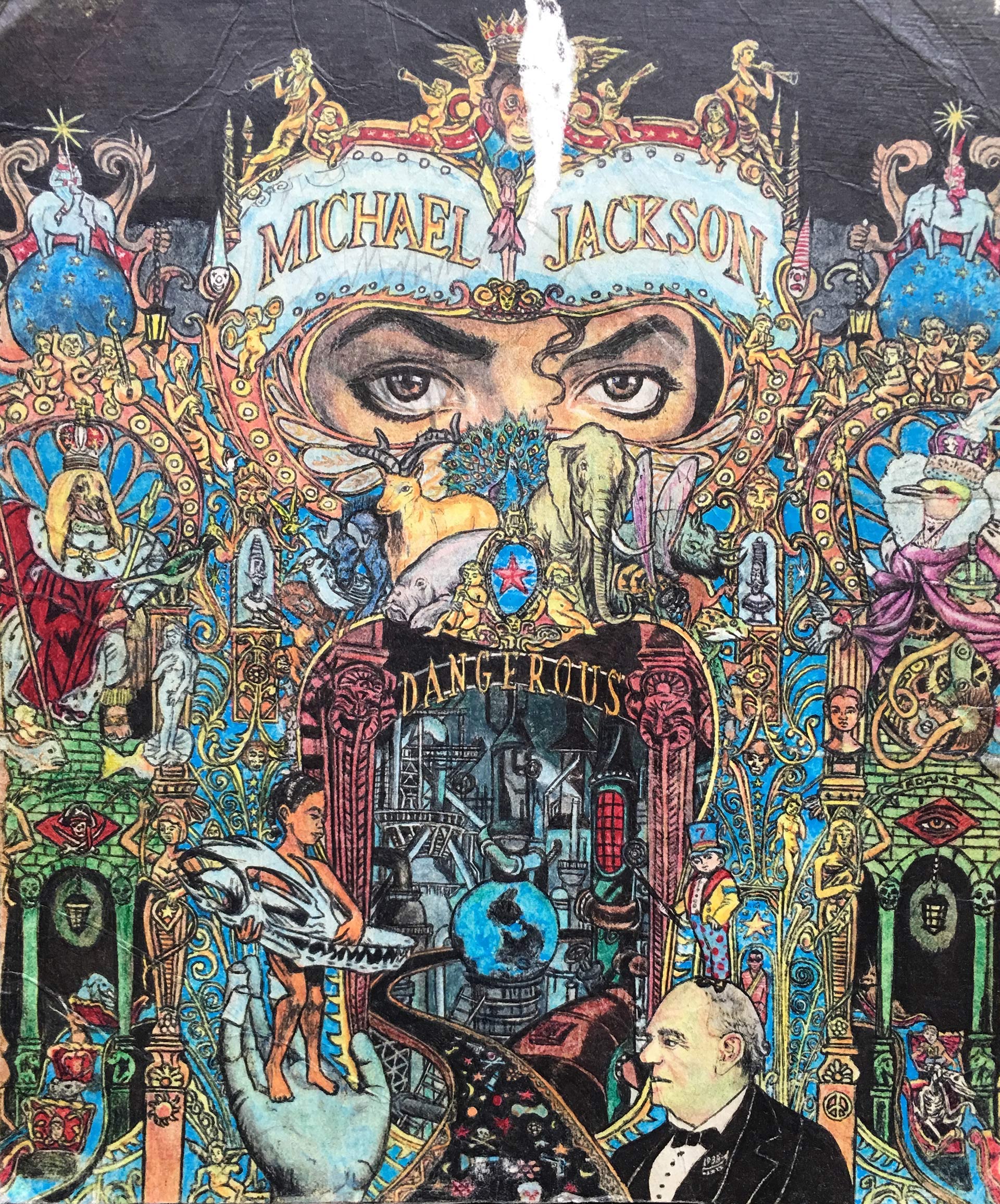 Growing up I was a huge Michael Jackson fan, and one of my favorite albums was Dangerous. I loved the music, but the album cover was what made it truly special to me — it was one of the most intricate pieces of art I’d ever seen in my life. And my father was able to replicate it flawlessly using a completely unique style all his own. First, he would close his eyes and visualize all the colors he was going to use: shades of blue, purple and yellow. Then he started with a small dot in the center of the sheet of paper. And everything flowed outward from that point.

Everything from the curl of Michael Jackson’s hair to the shape of his eyes was precise. In my father’s mind, he was creating a new world from a single starting point. I’ve always admired his thought process, and how he goes about making his art.

As time went on my visits began to taper off. I began to take football seriously and couldn’t go to visit him as often. After every game I played, my grandmother would update him on how I had done. No matter what, my dad always had some advice for me even though he hadn’t actually seen the game.

During my years at Penn State, I kept his artwork stashed away in my dorm room, and anytime I went through a tough practice or was having a rough day, I would pull his drawings down from the top shelf in my closet. Looking at those pictures, I felt as though I was connecting with him and experiencing his creativity — even though we were hundreds of miles apart.

I carried my father’s artwork with me even after I made it to the NFL. I found refuge in his art. It provided a break from some of the monotonous things in my life. 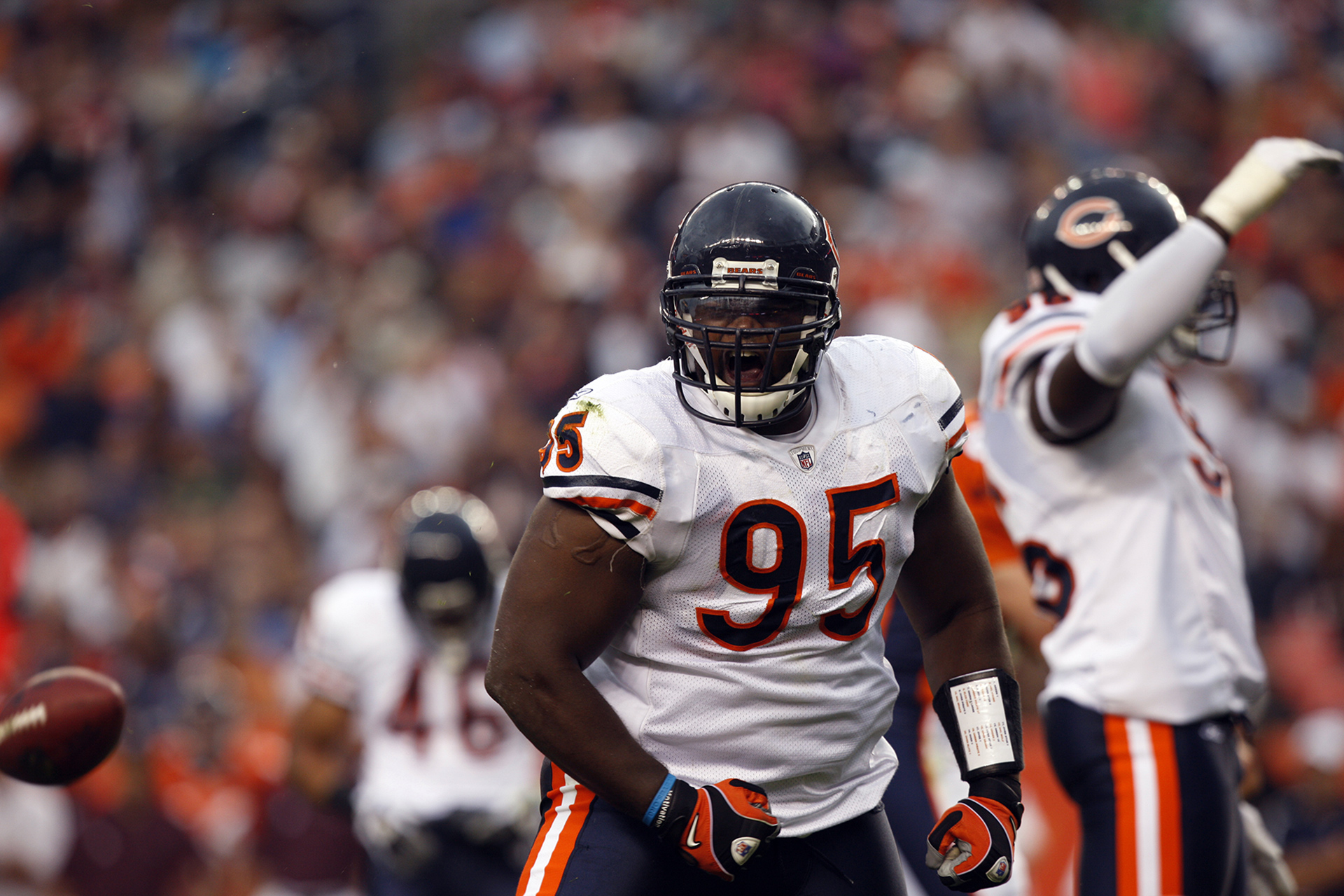 After 26 years of being incarcerated, my dad was released in 2010. From the moment he walked out of the penitentiary I wanted to help him get situated in his new life outside of prison — whether it was buying his first suit or explaining the importance of financial literacy. I felt that, after all those years, helping my dad to integrate back into society might be the best way to show my appreciation for how he had tried his best to keep up with my life.

But first, the movies. In particular, Spider-Man 3.

Growing up, watching movies was my thing, and if there was one passion I wanted to share with my father it was my love for movies. Of course, my pops wasn’t used to IMAX movies. The last film he saw in the theater before he went to prison was Ghostbusters, which was released in 1984. Watching my dad ducking in his seat as if Spider-Man was slinging webs at him will always go down as one of the most fun times we’ve ever had together. 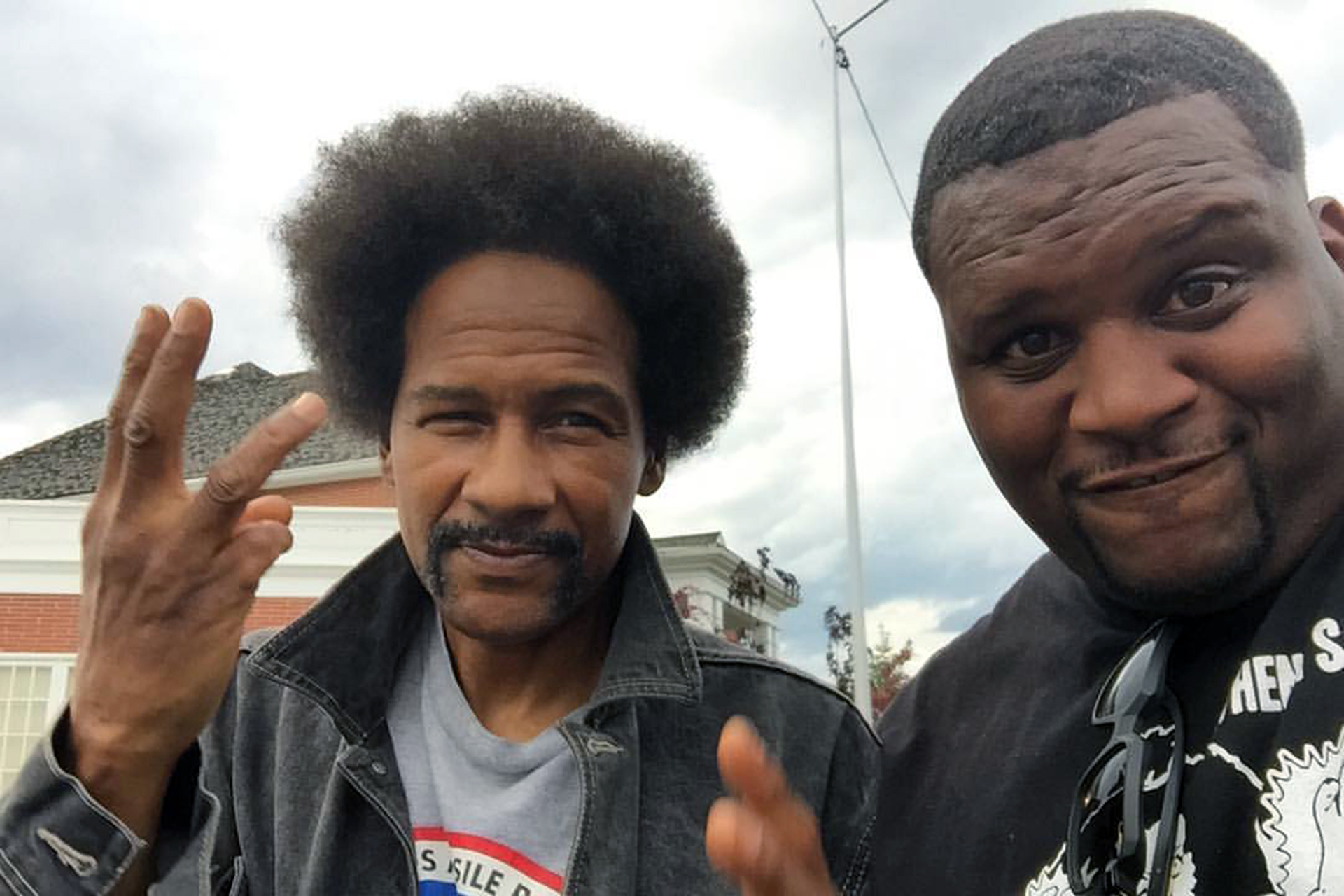 But it wasn’t even really about the movie. It was all about the moment — the first time in my life I got to experience something new with my dad. I had finally gotten to share one of my favorite things with him. As a kid, that’s the moment I had always wanted — just the opportunity to share experiences and good times with my father.

In a way, our relationship is a lot like his drawings. The first time I saw him behind bars was our point in the middle of a blank canvas. With every visit, our relationship grew outwards, spiraling and blossoming into something beautiful. For us, everything came from that first connection.

I never had the, quote, unquote, “perfect family” like Ron Crews did.  But, with the new relationship my father and I have developed, something beautiful is taking shape. I can’t wait to see what our picture will look like.