Doing It for T.J.

I was a sophomore at Memphis and had gone home to Baton Rouge, La., for winter break for what I thought would be a joyous occasion: My stepmom had given birth to a baby boy. His name was T.J., and I couldn’t wait to lay my eyes on him.

But when I arrived at the hospital a few hours after he was born (I wanted to give my stepmom and my dad some space) and met my dad in the lobby, I could tell something was up. He wasn’t smiling the way I thought he would be — the glimmer in his eyes wasn’t there. He looked nervous.

“It’s been a crazy morning,” he said. “T.J. was born with a condition called hydrocephalus.”

Hydro what? I’ve never heard of that.

“We don’t really know what it means right now,” he continued. “We’re still finding out how serious this is. But come and see him.”

As we wound through the maze of hallways on our way to the neonatal intensive care unit, I asked my dad all sorts of questions. But he didn’t have any answers. His thoughts were jumbled up. I couldn’t imagine the stress — his brand new baby had been immediately taken away from him and my stepmom. All they could do was hope and pray.

“Wait … what is … I’ve never seen anything like that before, Dad.”

T.J.’s head looked two times the size of his body. Legit. Two times. I was speechless. My dad turned to me.

“I know, T. I know.” There was sadness in his voice. “He’s got fluid on his brain. They’re probably going to need to drain it somehow. But we don’t really know much else.” 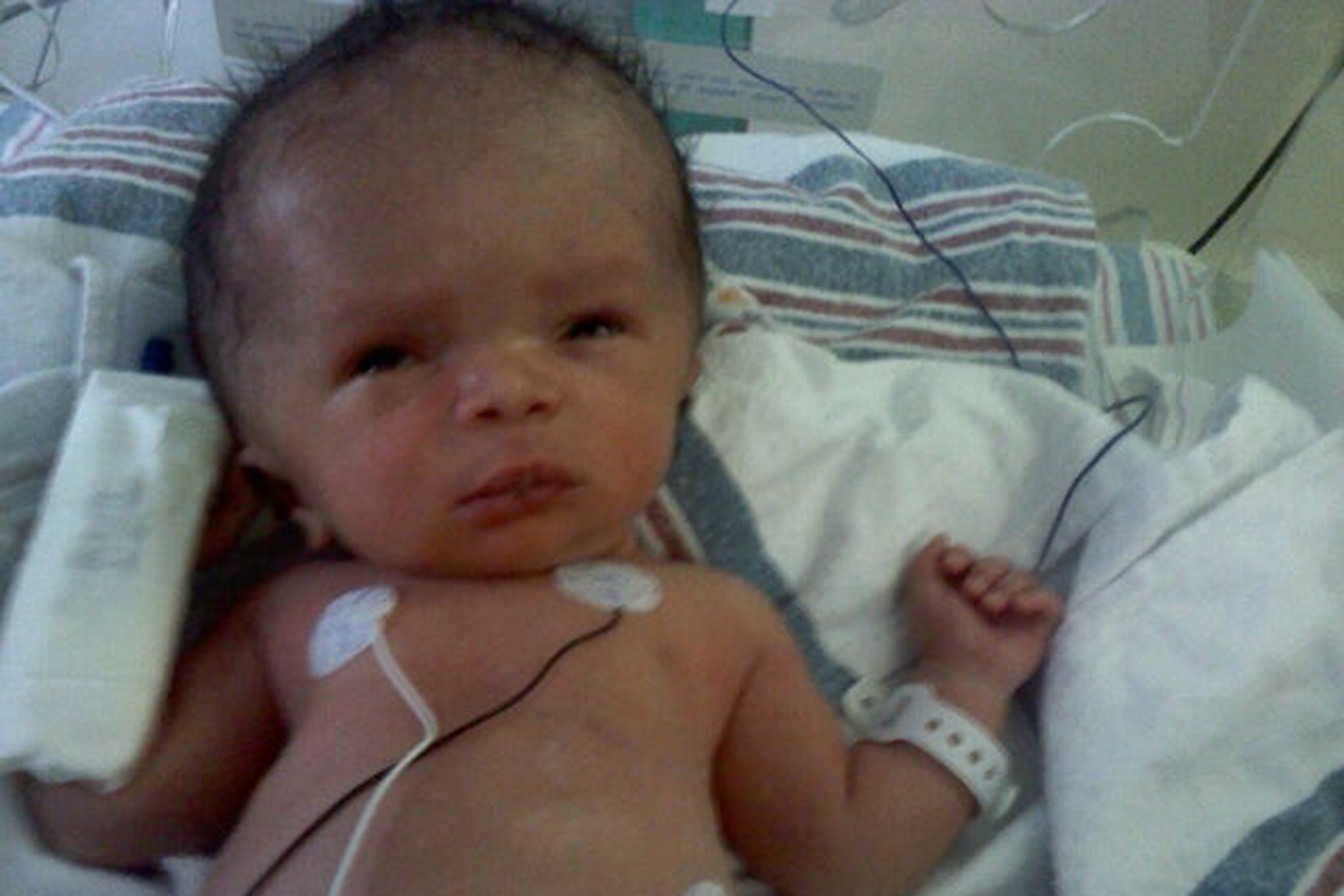 As my fingers tapped away on my phone, a doctor came into the room and told us straight up that T.J. was going to have to go into surgery.

As we hurried back to my stepmom’s room, I couldn’t get the image of my baby brother — his body connected to monitors by all these tubes — out of my head. How could this have happened to him? My dad and stepmom were both healthy. It just didn’t make any sense.

When I saw my stepmom lying in her hospital bed, all these emotions hit me. I went over to hug her, and when I saw the look in her eyes, I was determined to figure out what was going on. I sat down in a chair in the corner of the room. I pulled out my cellphone and, with the screen just inches away from my face, opened up my browser and started typing.

The results that popped up included phrases like cerebrospinal fluid, communicating and noncommunicating hydrocephalus and shunt system. I didn’t spend enough time reading to really understand what they meant because I was scanning everything so quickly.

My eyes only stopped at one word:

No. No, please, no. I wasn’t going to accept that. I couldn’t accept that. So my eyes kept searching while my head and my heart started praying.

As my fingers tapped away on my phone, a doctor came into the room and told us straight up that T.J. was going to have to go into surgery.

The doctor explained how he needed to install a shunt system — which is basically a catheter and a valve — in T.J.’s body so he could drain the fluid from his brain. It sounded very risky.

I was scared. We all were.

I know my dad to be a strong man. He had been in the military for years and was the rock of our family. He was never really bothered by anything, especially in difficult times.

But seeing his son in the condition he was in … I think the whole situation just got to him in a way I’d never seen. And as we spoke while T.J. was in surgery, I could hear his voice trembling.

After a few hours, the doctor came into my stepmom’s hospital room. I was sitting in the same chair where I had read the word fatal. The surgery was over. T.J. was in stable condition. The doctors had successfully implanted a shunt system in the back of his head. It was the first time since T.J. had been born that we could breathe easy. But I knew we weren’t in the clear yet.

It turned out that moving on to Tulane was a blessing for me in more ways than one.

The very next day, on Jan. 7, I made the 5½-hour drive from Baton Rouge to Memphis for classes. My dad and stepmom called me four days later … they said that T.J. had to go into another surgery because the shunt system wasn’t draining properly. In fact, in the first two weeks of his life, T.J. underwent surgery three times. Every single morning I feared that I’d wake up to a text from my dad saying something like, “Call me immediately,” or “T.J. didn’t make it.”

I couldn’t do it anymore. I didn’t want to be a text or phone call away. I wanted to be within reasonable driving distance so that if my parents needed me, or if there was an emergency, I’d be there. I decided to transfer to Tulane, a 1½-hour drive from Baton Rouge.

The process of transferring as a sophomore, especially as an athlete, can be pretty daunting. But I didn’t really care. In my mind, it was the obvious decision. And it turned out that moving on to Tulane was a blessing for me in more ways than one.

These days, T.J.’s at home and in stable condition. As a four-year-old, he’s still fighting. But he’s in much, much better condition than he was back in 2012, ’13 or ’14. Since he was born, I’ve seen the progression from when he was connected to a feeding tube in the NICU to when he just started talking a couple of months ago. It truly is a miracle, and I’m so happy that I was nearby during those tough years.

When I was at Memphis, I wasn’t in the right psychological state to perform at my best on the football field. But when I moved back to Louisiana, I was finally at ease. I felt like I blossomed as an athlete. I ended up playing football at Tulane in 2013 and ’14, and I impressed enough scouts to be taken by the Denver Broncos with the 251st pick in the 2015 NFL draft. With T.J.’s quality of life improving, and with me fulfilling my dream of going to the NFL, it was such a special time for my family. 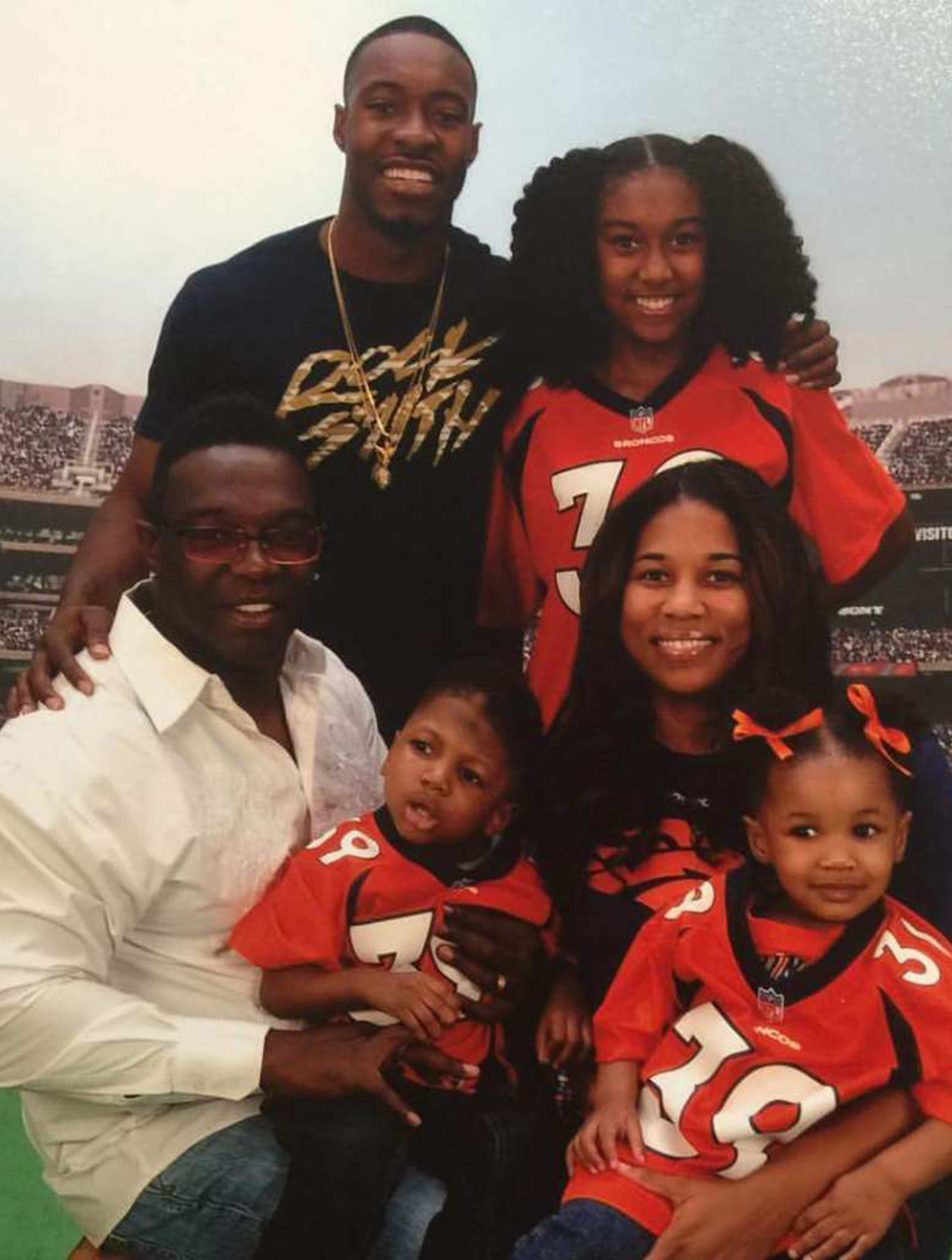 We rode the good vibes into 2016, when, in January, I was called up from the practice squad to be a member of the active roster that won Super Bowl 50. That turned out to be a fortunate turn of events, not just for what it did for me as a football player, but also for what it allowed me to do off the field.

Soon after the Super Bowl, I was contacted by the Hydrocephalus Association, which asked me to be the keynote speaker for their annual conference in Minneapolis. So in June, I joined my stepmom and dad, my two younger sisters and T.J. and spent four days learning about the condition and meeting survivors.

I mean, I saw pictures of some of these kids after they were born who looked way worse than T.J. did … but seeing them in person, I would’ve never known anything had ever happened to them. So while the past 4½ years of T.J.’s life haven’t been easy, going to this conference gave me hope for him, and for the thousands of others affected by hydrocephalus.

When I have a quiet moment with my dad, we smile when we talk about how far I’ve been able to come, both on and off the field. And I always tell him, “I want fans to look at the name on the back of my jersey and say, Wow, this guy lived the life he talked about.” See, hydrocephalus has given me perspective on life. Since I was a P-squad player for the majority of last season, I couldn’t travel with the team to away games. So instead of sitting at home, I started visiting children in local hospitals on Sundays and handing out Broncos gear. Sometimes it was a jersey, other times a toy football. Just to see these kids’ faces light up with happiness … it was amazing.

This year, I’m back on the P-squad, and each day I’m still working toward the active roster. During away games, though, you’ll still catch me handing out all that orange and blue gear, because every kid deserves to smile. Every single one.

Let’s help them do that.

To learn more about hydrocephalus and how you can support, visit http://www.hydroassoc.org/.