This is The Tribune Mailbag, a series in which athletes answer questions sent from our readers. Our past editions have featured athletes from all corners of the sports world, including Richard Sherman, Megan Rapinoe and even the Founding Publisher himself.

For this edition, we asked Cavaliers forward Kevin Love to answer your questions about his dream UCLA starting five, the Beach Boys, his favorite Game of Thrones character and more.

If you could choose from any era, who would be your ideal frontcourt partner? —Jordan

It’s so hard not to say Shaq, and he’s top-of-mind because he just got inducted into the Hall of Fame this fall. Hakeem is right up there, too. Watch highlights of the Dream and tell me he’s not basically a guard in a big man’s body? It would’ve been cool to play alongside him.

If you were a wrestler what would your finisher be? —Mark

In some shape or form, I’d have to go with a Stone Cold Stunner or a Rock Bottom, but with my own twist on it. That was the wrestling era I grew up in.

If you weren’t playing in the NBA, what other sport/interest/profession would you pursue full time? —Jenna

What is the funniest moment you have experienced as a Cleveland Cavalier, on or off the court? —Nathan

Channing’s postgame evaluations of my performances are up there as the funniest. He’s a really smart observer of basketball, but the way he gives me analysis after the game is a weird mix of a hype-man and a sports announcer. He’s usually poking me in the chest and yelling. If you didn’t know him, you might be a little frightened by it.

Sometimes Channing will flip the script and hype his own game up to me. He’ll say something like, “Did you see it? Did you see the rebound I got in the third quarter?”

Nothing against cats, but I’ve always been a dog person. When I was growing up, our family had a sweet Rottweiler named Alma. Objectively, Alma was the best dog ever.

I entered college this fall, do you have any advice for me? Thanks a lot and all the best! —Sammie

Don’t be a procrastinator like me. Get your work done early. If you ever need a note for your professor, though, just holler.

我们在湖北武汉等着你！(We are waiting for you in Wuhan!) —“N”

That’s funny because … Wuhan is my favorite city in China. (Looks for Wuhan on map of China.)

What’s your favorite Beach Boys song? And why? —Andrew

Good question … but tough. I grew up listening to the Beach Boys. I’d have to say “God Only Knows” is one of my all-time favorites. But if you’re in a melancholy mood, I’m going to throw out a deep cut for you: “I Just Wasn’t Made for These Times.” Great song.

Please buy me an iPhone for my birthday, pleeease! —Michelle

Can’t promise an iPhone, but would this work? This is what I had in high school.

What types of non basketball workouts do you do in the offseason? —Marilyn

Every summer I go to Utah to work out for a month. The weather’s great and without all the skiers, it’s quiet. Most of all, the altitude makes for an ideal training environment. This summer, Champ (aka James Jones) visited for a week and we worked out together. We found a beach volleyball court and we would do morning workouts there. So I may have a post basketball career on the beach?

Do you have a personal goal this season? —Thomas

Before the season, I told myself I wanted to average 10 or more rebounds a game and get to the free throw line more.

My daughter Elsa said, “Mommy, can we invite Kyrie Irving and Kevin Love to my birthday party?” I told her I would try! Thanks and have a great season!! —Teresa

If there’s red velvet cake, I’ll be there.

Do you have a nickname? —Randall

Did you see our ’80s nicknames?

At UCLA, Darren Collison and I called each other “Gumbo.” At one tournament in New Orleans before my freshman year, we shared a room. Darren is very quiet and very much a homebody. I like my downtime, too, so we hit it off. In between games that tournament, we discovered the most delicious chicken and red bean gumbo on earth. We’d order it to our room and just hang out. On the court, we didn’t lose a game.

That’s how “Gumbo” was invented. When the season started, all either of us had to say was “Gumbo” and it was on: After the other team made a free throw, he’d take off down the court and I’d nail him with an outlet. It helped that he was super quick. I think both of his parents were elite track runners. To this day, when we see each other, we’ll yell “Gums!” and start laughing. That’s how it was with our UCLA team. Lots of inside jokes. Like family.

The Hound. Hands down.

Hi Kevin,
I feel like I have to ask a Game of Thrones question: For you, what is the most heart-wrenching death from the series so far? —Nouia

What was going through your mind as you stepped off the plane after the Finals standing next to Kyrie and LeBron? —Kellen

That I should have lent my shirt to J.R.

I’m always watching movies on the road. Lately I’ve been dipping back into old spaghetti westerns — Sergio Leone films. I’ve gotten pretty deep on the Internet on what Sergio was like as a director. Did you know he turned down the chance to direct The Godfather?

One movie I’m looking forward to is the new Jamie Foxx movie about Mike Tyson. If you want to get hyped for that one, watch Jamie Foxx describe the opening scene.

How much of a role do the team’s attendants, ball boys and staff, play in the Cavs’ success? —Sean

Anyone on our team will say this: They’re like family. It all starts with them. One of the best moments of last year was getting to see the Cavs family we see all year celebrating with us at the parade.

Why didn’t you look at the camera? ? —Travis 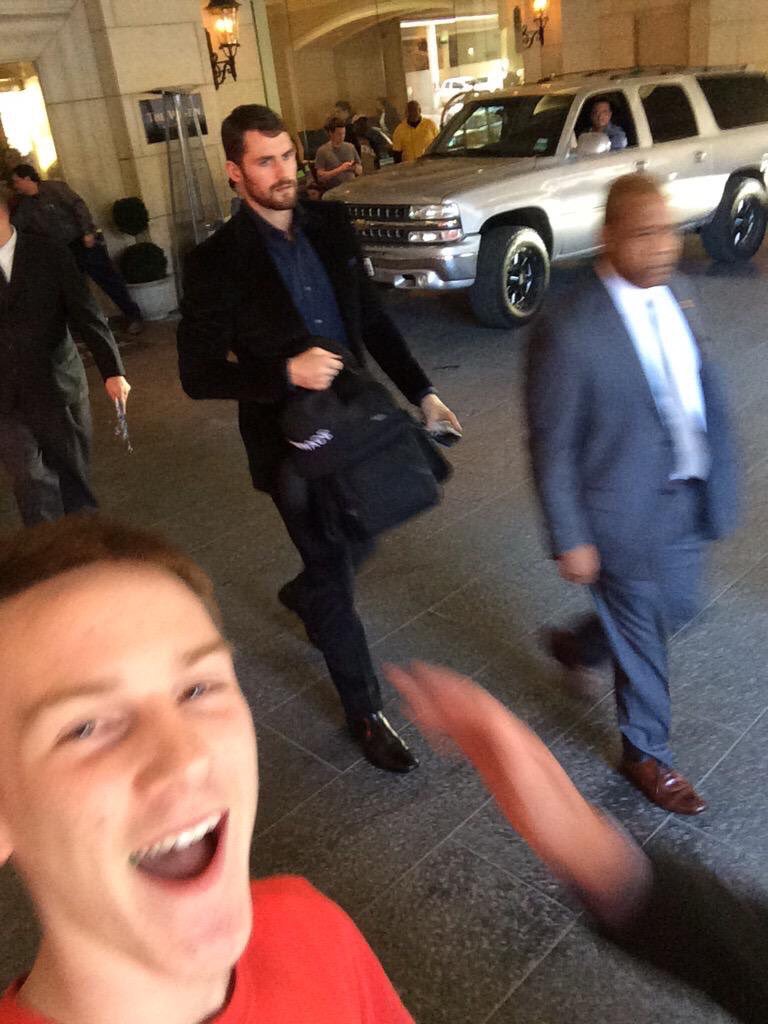 My bad. Next time! Also, I’d love to hear the story of the hand on the right that looks like it’s about to swipe your camera. Box out!

Who are your starting five, and who is the sixth man on your all-UCLA team? —Erkki C.

All-time? That’s crazy because you could field five teams that would be legendary, but I’ll try.

O.K., you’ve got Russell Westbrook at the two. Probably Baron Davis at point. Kareem and Walton have to be my bigs. At the three, I’ll go with Ed O’Bannon.

(And maybe some young guys — Zach LaVine or Lonzo Ball — coming off the bench for highlight reels.)

I’m just worried how anyone can play while wearing with the bulky title belt you earned last season. You are wearing it during games this season, are you not? —James #StillAllIn

Better believe I would if I could. Can you call Adam Silver for me? It’s a dress code thing.

Was there a particular moment that made you fall in love with basketball? —Amaya

I grew up around basketball, but one moment that sticks out was going to see UCLA play Oregon when I was like eight years old. That’s when I got my first glimpse of the Bruins team that would go on to win the NCAA championship. The O’Bannon brothers. It was probably the moment I knew I wanted to to go to UCLA, which was a bigger thing than it sounds like because my dad is in Oregon’s Athletic Hall of Fame. Maybe I was supposed to go to Oregon, but I had different ideas.

What does your perfect day look like? If you had no work obligations, what would you do? —Alona

I’d probably have the team over. We had a bunch of team meals last year after the playoffs started and it became a tradition. We had a lot of time off in the early rounds, so we were just waiting around in Cleveland. Dinners would be around 6 or 7 p.m., but RJ and Channing would come over at like 3. I’d tell them they were early but they wouldn’t listen. So I’d make them go to the basement, where I have a game room, to watch TV and wait for everyone else to get there.

Did you ever run into Bill Walton in college? —Kyle

I’ll tell you about the first time I met him. I ran into Bill Walton on campus as a freshman. We ended up talking for 30 minutes. And Bill legit spoke for 29 of those minutes.

Later that week I ran into Coach Wooden, and I told him I had just had a chance to speak to Bill Walton.

Coach Wooden replied: You’re sure you got a chance to speak to him?

Coach Wooden went on to tell me about how Bill was one of his sharpest players, but that he had a speech impediment in college. Over time he grew out of it.

“Once we got Bill talking,” Coach Wooden said, “He didn’t want to stop.”

How would you describe the feeling in the Finals when you were down 2–1 or 3–1? —Mark R.

When I say we always believed we could win, that’s true — for our whole team. After our Game 2 loss, everyone in the world was saying it was over. I remember leaving Oracle and an old friend came up to me and said, “This is Ali-Foreman. This series is going to go the distance.” At that point, he might have been the only person in Oracle, outside of me and my teammates, who believed we could get that series to a Game 7.

Do you have some story with Kobe Bryant, and where do you think he ranks in history? —Li Fuyang

My family’s always had a connection to L.A., so I’ve always had a special reverence for Kobe. Kobe is up there as the best scorer of this generation and arguably one of the best players ever.

I was lucky to get to watch him early on in my career because we were both on the 2012 Olympic team. But let’s see … the story that comes to mind about Kobe was at the All-Star Game in L.A. in 2011. In warmups before the game, everyone is kind of messing around and getting loose and Kobe comes up to me and says, “How do you get so many rebounds?”

I thought he was joking because it was the All-Star Game, but he seemed serious, so I gave him some tips. Before the game started, Kobe came over to me while I was talking to Dirk and he said, “I’m going to go out and get a double-double.” Later in the game, I checked in and gave Kobe a big hug.

Kobe was smiling and said, “I told you. I told you.”

Dirk was laughing as I came back to the bench. In his German accent, Dirk said to me, “It’s crazy, man, it’s crazy. When Kobe says something, he’s going to do it.”

Kobe finished the game with 37 points … and 14 rebounds.